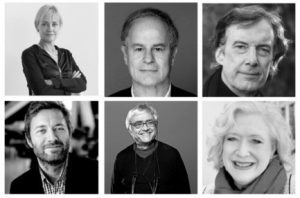 The World Architecture Festival (WAF) has announced its speaker line-up for this year’s event, which takes place in Berlin from 15–17 November 2017.

A collection of world-class architects will come together to speak in Berlin including Pierre de Meuron, Alison Brooks, Rafael Viñoly and Charles Jencks. This year’s programme responds to the Festival’s theme, ‘Performanc’, and will include speeches, discussions and debates examining the topic of performance from the perspectives of housing, public spaces, festivals, cultural institutions and new technologies. The event takes place in Arena Berlin, a converted 1920s bus station in Treptow, in former East Berlin.

Internationally acclaimed architect Rafael Viñoly will examine how the concept of performance ­– creating flexible and integrated architecture that fosters and encourages a wide range of interactions—is applied in the practice’s projects across a variety of building types, including the Tokyo Forum convention centre, the Walkie Talkie office tower in London, and a current project for a temporary mobile performance facility in Berlin.

Elbphilharmonie opened earlier this year to much critical acclaim. Architect Pierre de Meuron and cultural theorist Charles Jencks will present the building and Pierre de Meuron will comment on it, reversing the role of the critic and architect. Pierre de Meuron: “With the architecture of the Elbphilharmonie, we redefined performance: The people, that is the combination of audience and performers, determine the space; the space seems to consist only of people.”

Alison Brooks will look at performance embedded in the nature of housing and the many roles it plays: as urban form; as a backdrop for public streetscapes; as a sign of neighbourhood identity and a stage for domestic life. Her housing scheme Ely Court was shortlisted for the 2017 Mies van de Rohe Prize. Jacob Kurek has extensive experience in building projects in challenging climates, from deserts in the Middle East to the Faroe Archipelago in the North Atlantic. He will examine what lessons can be learned from coping with extreme weather conditions.

Burning Man is a spectacular annual event in Nevada’s Black Rock Desert, where thousands of people gather to create their own ‘city’. Programme Director Kim Cook will introduce this ultimate performance event and discuss the temporary structures created in the middle of the Nevada desert, which is home to 70,000 people each year.

A session exploring implications of new technologies on designers and how planning can perform better as a result of accurate city modelling. Jason Wagstaff and Gordon Ingram developed the first fully interactive 3-D model of London and will discuss the possibilities technology will offer architects and planners as a result.