The City of Markham honoured winners of the 2021 Markham Urban Design Excellence Awards at a virtual Awards Gala on October 28, 2021. Five juried awards and the People’s Choice Award were named, recognizing the best of Markham’s buildings and public spaces. 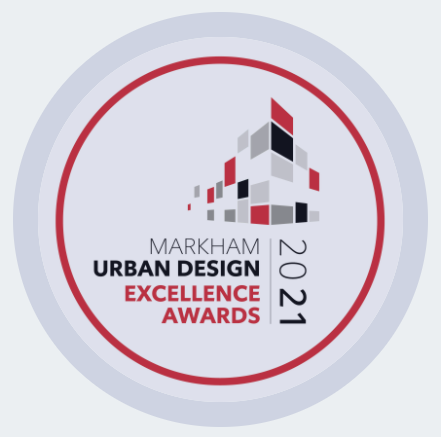 “Markham has a longstanding tradition of celebrating design excellence and this year’s Markham Urban Design Excellence Awards honours those in our community making significant contributions to our public realm and urban form,” said Markham Mayor Frank Scarpitti. “The City of Markham extends our sincere appreciation to design leaders that are putting Markham on the map. Congratulations to award recipients and all nominees for submitting their projects for consideration.”

The competition-based awards recognize and promote excellence in building design and placemaking. Industrial, commercial, residential, recreational, heritage, open space and public realm projects completed in the City of Markham before August 27, 2021 and within the last six years were eligible for consideration.

The awards and projects include:

Aaniin Community Centre and Library at 5665 14th Avenue
Perkins & Will

The jury commended the design features and level of detail that the building achieved in terms of scale and variety and the thoughtfulness given to the integration with the exterior space, connectivity, abundance of natural lighting, and consistency in the architectural language.

Jury members commended this elegant building’s craftsmanship, with every detail considered in terms of colour and scale. They were impressed by the good use of space and intent to take advantage of a small site by stacking the building above the open space in a very compelling manner. The building was also unexpected but captured beauty and spiritual essence in a nuanced way.

The jury commended the large mixed-use community with a variety of buildings, green spaces and streetscapes, and neighbourhood amenities, and especially admired the connectivity and emphasis on transit and walkability. They felt that this was an excellent example of urban placemaking from scratch.

Jury members commended the project’s environmental sustainability, which offered a unique pedestrian experience while ensuring minimal disturbance to the natural elements. This project succeeded in bringing accessibility and connectivity to the path and trails of the Rouge River system and used materials that will look spectacular in all seasons.

The jury commended the diversity and playfulness in the architectural expression that this project offered. It achieved the tenets of urban intensification in terms of scale and created a variety of built form that is appropriate for its surroundings. The building façade mixes windows, walls and balconies to achieve lightness and views from the inside while supporting sustainable building practices

The Milne Dam and Milne Creek Cable-Stayed Bridges won the inaugural People’s Choice Award, receiving the most public votes cast from October 4 to 22 amongst 23 buildings and public spaces that were past winners, as well as entries for this year’s Markham Urban Design Excellence Awards.

“I want to express my deep appreciation to the jury of the 2021 Markham Urban Design Excellence Awards for their valuable time, professional expertise and hard work, and congratulate them for arriving at five very thoughtful choices that exemplify the best in city building through urban design and placemaking. I also want to thank the Awards Committee for organizing this competition and for supporting the jury every step pf the way,” said Arvin Prasad, Commissioner of Development Services. “The calibre of the winners stands as a testament to the urban design excellence encouraged by the City of Markham, and I am delighted that residents joined us in enjoying and recognizing the importance of design in their everyday lives by voting in the first-ever People’s Choice Award.