Why We Need Embodied Carbon Benchmarks and Targets in Building Standards and Policies: An Open Letter

Architect Kelly Alvarez Doran led a master's studio on what it would take to cut the embodied carbon of Toronto's MURBs in half. Here's what they found.

To Canadian Municipalities and Associations of Architects, Engineers, and Planners:

Canada, as well as a growing number of its jurisdictions, has set necessarily ambitious carbon reduction targets as part of an increasingly urgent global bid to achieve climate stability. While the spotlight often falls on the transportation and energy production sectors, 40 percent of global carbon emissions comes from the construction and operation of buildings. We are becoming increasingly aware that a big part of the issue—11 percent of global emissions—comes from the embodied carbon of the materials that go into the new buildings constructed each year.

The AED sector is just starting to understand the immense carbon impact of building materials. To drastically reduce this impact, greater knowledge, and firm embodied carbon benchmarks and targets, must become part of building standards and planning policies that govern construction across Canada.

Last fall, I headed a Masters of Architecture Research Studio at the John H. Daniels Faculty of Architecture, Landscape, and Design at the University of Toronto that aimed to find some practical, implementable answers. The studio was titled “Towards Half: Climate Positive Design for the GTHA,” and was framed around the basic question: “How do we halve the greenhouse gas emissions of Toronto’s housing stock this decade?” The intention of the studio is to catalyze a conversation around embodied carbon, and to expose students, practices, and policy-makers to the methods available to account for emissions. 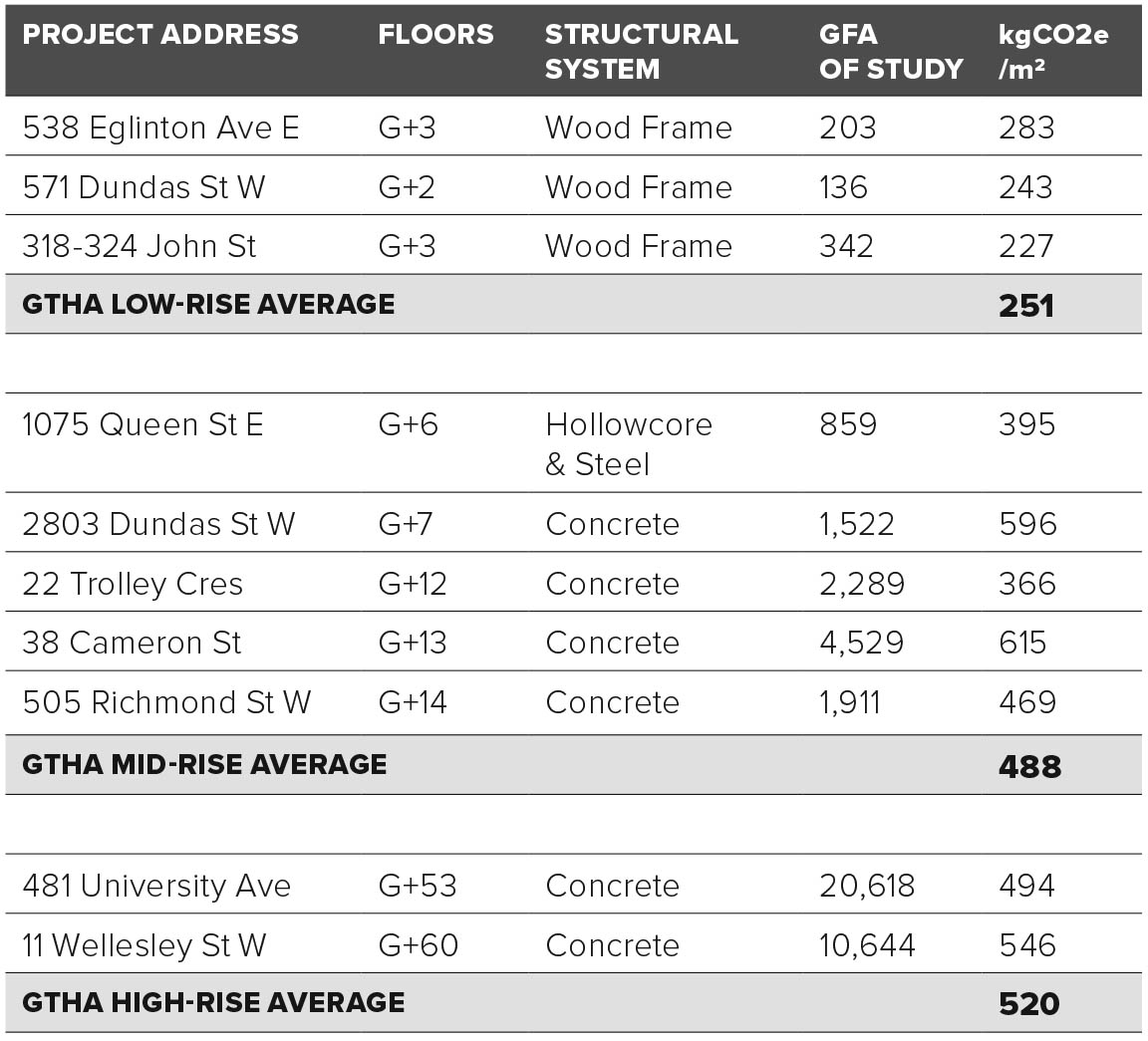 To begin answering this question, students were asked to answer “half of what?”—or in other words, what we are currently emitting through the construction sector?  The studio employed a methodology similar to the City of Vancouver’s Policy Research on Reducing the Embodied Emissions of New Buildings in Vancouver. Collaborating with ten architectural practices, the students produced embodied carbon benchmarks for a range of recently completed and in-construction residential projects within the Greater Toronto and Hamilton Area.  Students first translated construction drawings and specifications into detailed digital models of a representative section, then developed a Bill of Quantities of all construction materials from the model. Finally, they used One-Click LCA’s embodied carbon calculation platform to produce a “cradle-to-gate” assessment of each project’s Global Warming Potential (GWP) expressed in kgCO2e (kilograms of carbon dioxide equivalent). The results of these calculations are listed above.

The calculations include each project’s structure, envelope and interior finish. They do not yet include the emissions associated with demolition of previous site buildings, excavation and site works, shoring, MEP systems, millwork, hardware and fixtures, or landscape. As a result, we estimate that these figures represent between 80-90 percent of the project’s total embodied emissions. Total emissions are derived from available manufacturer-provided Environmental Product Declarations (EPDs)—which are admittedly relatively limited in the Canadian context to-date. To ensure cross-project comparisons be on equal footing, students used the same EPDs across projects where applicable.

Based on these summary calculations, students then analyzed the primary drivers of each project’s embodied emissions from a design, material selection, and supply-chain perspective. Below is a summary of five common drivers that emerged across the projects, and recommendations for how they could be addressed through local planning / zoning by-laws, building codes, as well as through architectural design and engineering choices.

XPS insulation and aluminum-extrusion-based glazing systems carry the highest embodied GWP by volume of all building materials in the study. XPS insulation’s extremely high GWP is attributed to the harmful blowing agents used in its making, which have recently been banned in products sold in Canada. Aluminum’s sourcing and smelting is also extremely energy-intensive, resulting in relatively high embodied emissions compared to other metals. Unitized window-wall systems that employ high volumes of aluminum therefore have higher per-metre emissions than other glazing systems.

Foundation works, underground parking structures, and below-grade floor area have disproportionate impacts on a project’s embodied carbon. For mid-rise and high-rise structures, between 20 to 50 percent of each project’s total volume of concrete was below grade. The exception was 22 Trolley Crescent: due to site constraints, there is no floor area permitted below grade. As a result, the project’s embodied carbon is 25 percent lower than the next building with a reinforced concrete structure. 2803 Dundas Street West—the building with the second highest measure of embodied carbon per unit of volume—has 50 percent of its concrete below grade, as a result of offering two floors of below-ground parking built within challenging groundwater conditions.

Recommendation: Reduce/limit on-site parking requirements or allowances, review how sub-grade floor area is accounted for in coverage calculations, and incentivize the reduction of sub-surface floor area.

The spacing requirements of parking produces a structural grid that is often out of alignment with that of a typical residential floor plate. Projects that employ transfer slabs or structures to mediate these alignments have higher embodied carbon as a result. 38 Cameron Street’s one-metre-deep transfer slab is a significant contributor to the project’s total footprint.

Recommendation: Review embodied carbon impact of step-backs and weigh against other impacts.

We would love to support a similar approach in your municipality, region, or office. We look forward to discussing this research and its findings with you in greater detail, at your request.

The Towards Half Research Studio was conducted at the John H. Daniels Faculty of Architecture, Landscape, and Design. It was led by Visiting Professor Kelly Alvarez Doran, OAA, MRAIC.