Book Review: Where Are the Women Architects? 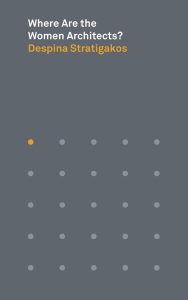 Women have been struggling to make their presence felt in architecture for a long time. In the late 19th century, women were seen as only being able to contribute to domestic interiors, with public buildings better left to men. That argument recurs through to the 1970s, even though in the interim, women had designed prominent commissions, from public theatres to entire urban neighbourhoods.

Despite robust enrollments of women in architecture schools in recent decades, there has not been a corresponding rise in female architects in practice. Historian Despina Stratigakos traces the reasons back to architecture schools, where there are relatively few women role models among tenured design faculty, included in architectural history curriculums, or invited as guest lecturers.

Looking to surveys on obstacles for women, Stratigakos argues that parenthood is an issue—but not the only one. A persistent salary gap, the dominance of male mentors who may unconsciously favour male interns, and underlying sexual discrimination in workplaces—from women being given more secretarial work to being told that pregnancy will result in a salary cut—are all to blame.

Such impediments can lead to a self-perpetuating cycle in which women accept the blame for their lower status in the hierarchy. “They lack the ambition to go after big jobs, it is said, or are unwilling to put in the long hours required to pay their dues,” writes Stratigakos, recounting common stereotypes. “The underlying presumption here, deeply engrained in the professional culture, is that architecture is a meritocracy that rewards talent and hard work in a straightforward way. Women who share that belief and who commit themselves to architectural practice without seeing professional returns are apt to lose confidence in their own abilities.”

On the same subject, Denise Scott Brown wrote: “On seeing their male colleagues draw out in front of them, women who lack a feminist awareness are likely to feel that their failure to achieve is their own fault.”

The insiduous and hidden nature of this internalized bias is perhaps the most compelling reason why all architects—especially those that don’t think that gender equity affects them—ought to examine this issue in greater depth to see if they may unwittingly be taking part.

Third-wave feminists are tackling equity in new and original ways. Architect Barbie, a toy championed by the author, is a symbol of how a younger generation is seeking empowerment by playing up their femininity. A movement to write women architects into Wikipedia is another important initiative.

Many architects strive to create socially-minded physical places that encourage access for all. It’s imperative to ensure that the same kind of equity is being built into the profession itself.