Over the last several years, it has become apparent to conscientious architects, planners, and ordinary citizens that the much-touted Vancouverism—a phenomenon characterized by medium to high-density mixed use residential and commercial buildings planned for park-filled pedestrian-friendly neighbourhoods—has a dark side and a very high price tag. Herein lies the raison d’être of a new monograph series on single-detached houses realized in and around Vancouver from the 1950s to the late 1970s. The University of British Columbia School of Architecture and Landscape Architecture (UBC SALA), in collaboration with ORO Editions, began publishing the West Coast Modern House book series in 2016. The series’ editors and curators are all SALA faculty members: Chris Macdonald, Sherry McKay, and Leslie Van Duzer. They write in the foreword to the series: “As rapidly escalating land values in the Vancouver region exert enormous pressure on residences created by a postwar modernist ethos, many important houses are currently endangered.” A case in point: Adele Weder, the author of a 2017 volume in the series dedicated to Ron Thom’s Copp House (1950), writes that “The B.C. government’s 2016 assessment of the house, independent of the lot, is $65,100; the valuation of just the lot itself is $33,316,000.” Richard Cavell, author of the monograph on the Friedman House (1954) by architect Frederic Lasserre and landscape architect Cornelia Hahn Oberlander, writes that this house “survives in a Vancouver where the price of land often trumps the value of architecture.” This educational and militant series seeks to raise awareness of an aggressive phenomenon typified by the 2007 demolition of Graham House (1963) in West Vancouver by Arthur Erickson and Geoffrey Massey.

The subject of the first book in the series, by Leslie Van Duzer,is Shumiatcher House. The story of Judah Shumiatcher’s education—engineer turned architect despite all odds—outshines the architectural merits of the house. This said, the series’ editors and authors deserve praise for publishing monographs on lesser-known—at least outside Vancouver—examples like Shumiatcher House or Merrick House (1972, profiled for this series by Tony Robins) alongside well-known examples like the Binning House (1940, chronicled here by Matthew Soules).

It is fitting that the series starts out with a house that has been razed. Van Duzer’s text admirably sets the tone for an inclusive approach that seeks to give space to the voice of the client. (In Shumiatcher House’s case, the client was his own architect and builder.) Van Duzer’s first monograph sets the graphic and conceptual layout followed by most subsequent books in the series: overview text followed by new colour photography by California-born Sweden-based Michael Perlmutter, and new documentary drawings of the building. Designer Pablo Mandel uses a modest “paperback” size and hardcover binding to create a distinctive, overarching framework for the series, while providing a bit  of individualism by assigning a different colour to each volume. 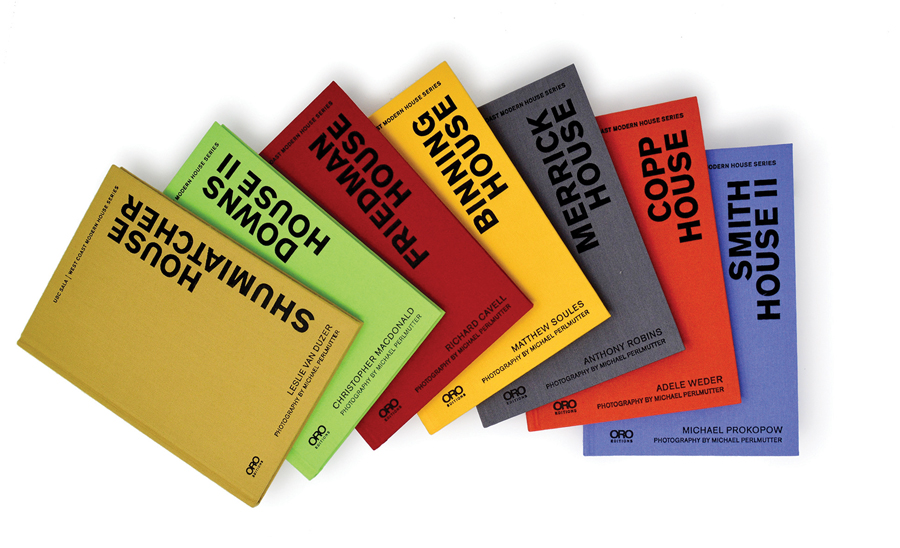 From the outside at least, there seems to be an “insider” quality to the choice of the series’ authors. With the exception of Toronto-based writer and curator Michael Prokopow, author of the most recent volume about the Smith House II (1964), all are based in Vancouver and have some affiliation with UBC. Although this series is meant to showcase the school’s contributions to 20th-century architecture in Canada and beyond, the presumption that locals know better is problematic. Perhaps casting a broader net to authors outside of British Columbia and even outside of Canada might have yielded some unexpected viewpoints.

Insofar as the writing is accessible, these books will have a fighting chance of getting into the hands of a broad audience—presumably one that includes individuals who are ready to pay millions to tear down architecturally significant buildings and replace them with McMansions.

That said, the footnotes are sometimes a bit too light, archival references are scarce and the historiographic framework is oftentimes minimal. (A number of the authors do not even list image credits. However, the “Life and Work” appendix to these volumes is useful to generalists and specialists alike.) Important terms like “critical regionalism” seem almost absent from the essays in this series. Nowhere is the context of Canada’s public initiatives during the postwar years around housing even mentioned so as to provide a context in which to discuss the rise of the single-detached house in then-peripheral (and at the time affordable) places like West Vancouver.

To be sure, the series’ authors would have helped more “outsiders” to better understand West Coast Modernism if they had discussed in greater depth the specific Canadian and American iterations of the phenomenon, especially as it surfaced over the years in architectural criticism and history. In the typically short forewards, the series’ editors might have been more explicit with recognizing the historiography and criticism that came before them. I am thinking, for instance, of the 2014 book edited by Greg Bellerby, The West Coast Modern House: Vancouver Residential Architecture.

It might be useful to more carefully position this West Coast Modern House series within a broader context of site-based schools of architectural practice across Canada (and the Americas for that matter): Brian MacKay-Lyons’ residential architecture in Atlantic Canada over the past decades demonstrates a command of landscape and understanding of material that conjures up spirit of place in powerful ways similar to West Coast Modernism. Arthur Erickson’s astute observation in 1962 to John C. Parkin about the differences between the West and East Coasts is still resonant today for North American architects: “Most of our buildings are only half buildings or must seem so in your (Eastern) eyes—because the other half is the site. You think in the more architectonic terms of complete geometry. Your buildings have flat bases whereas ours seldom have. I think our bottoms are the clue to our difference.”

As the West Coast Modern House book series adds more volumes (contingent on the help of more external funding), perhaps assigning a volume to Arthur Erickson’s 1972 reinforced-concrete Eppich House might increase awareness of the astonishing iterations of West Coast Modernism. Given that Erickson’s most consequential work was done in the city he knew best—Vancouver—it might also be worth raising the question about how contemporary architects negotiate place with the financial rewards and professional pressures of global capitalism that are now undermining the most progressive aspirations of Vancouverism.

Michelangelo Sabatino is an architect, professor and Dean of the College of Architecture at the Illinois Institute of Technology, and co-author with Rhodri Windsor-Liscombe of the 2016 book Canada: Modern Architectures in History.

Restored Canada Pavilion to open at Venice Biennale on May 26