Three projects across Canada celebrate the infrastructure needed to provide communities with clean drinking water, and to process urban stormwater.

The infrastructure required to process water—both as it enters our cities and homes, and returns to our lakes and streams—is vital to our everyday lives, and often taken for granted. Buildings that elevate this infrastructure underscore the importance of water, and the right to clean water for all. Through architecture, these often invisible systems enter the public eye, and begin to solidify the place of waterworks in our collective consciousness.

The most recent project by Toronto-based architecture and landscape firm gh3* is actually one of its first. Architect Pat Hanson and her team were awarded the contract to design a stormwater facility on Toronto’s waterfront in 2009—just three years after their firm was established. The initial design, for a stone-clad building half the size of the present facility, came in over the budget at the time, and was subsequently put on hold.

Since that time, the development of the east waterfront area has progressed by leaps and bounds. A larger facility was required, to not only handle stormwater runoff from the Canary District as per the original remit, but also from the developing East Bayfront and part of the Portlands. 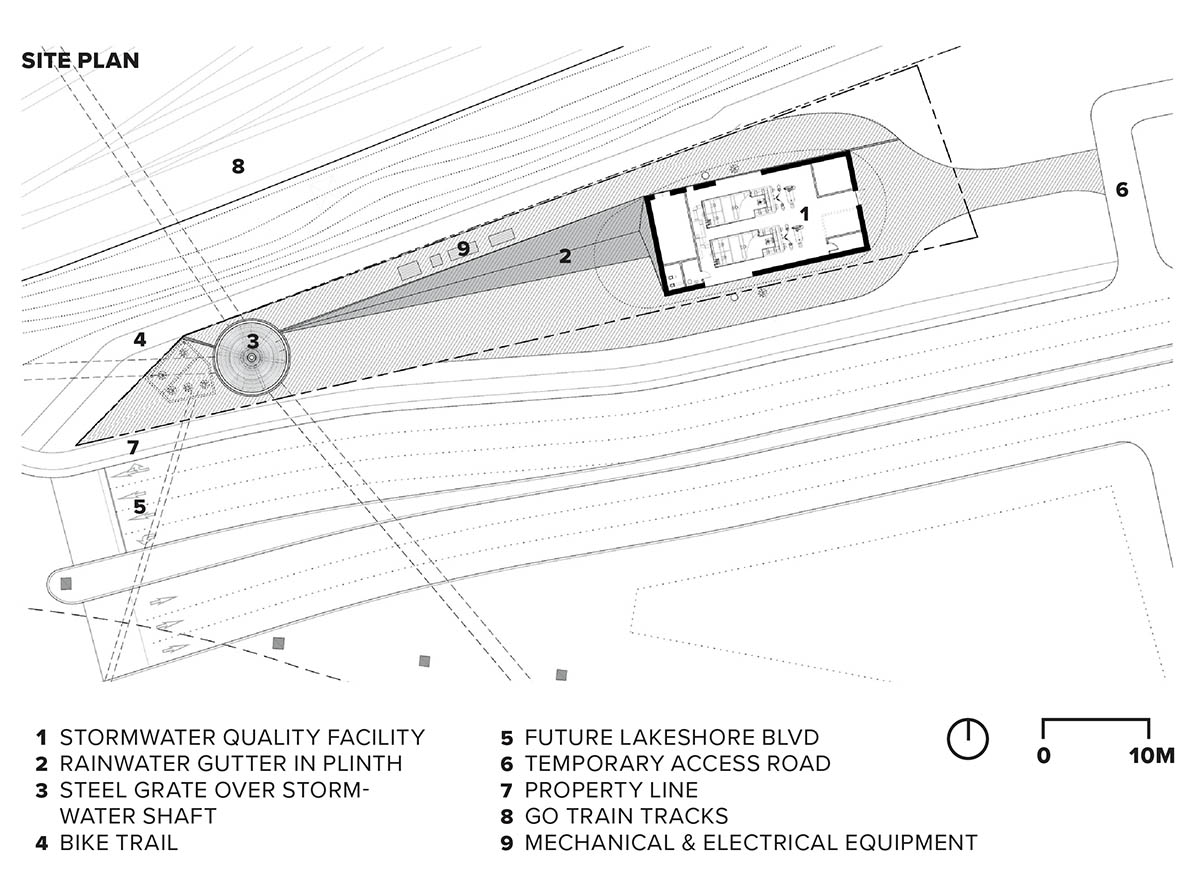 After an initial filtration that removes debris, urban runoff from these areas travels to a 20-metre-diameter, 90-metre-deep shaft at the west end of the site, marked at ground level by a supersized radial grate. From here, it’s siphoned into the main treatment plant—a path visualized by surface paving patterns—then cleansed for a return trip into a separate outer ring in the shaft. The purified water is deposited into the nearby Keating Channel.

The treatment plant itself houses two floors of equipment—flocculation tanks, fine sand filters, UV purification—all wrapped in a sculptural form. “It’s conceived as a series of manipulations of a simple volume, to show the shedding of the water,” says architect Pat Hanson. She adds that the involvement of Waterfront’s Design Review Panel pushed the design to become even more “expressive in showing the passage of the water.” This resulted in an integrated gutter that traces the path of rainwater from the roof, down the walls, and into a drain along the building’s perimeter. The canted roof is further accentuated by a triangular skylight and an array of chevron snow guards.

Because the industrial nature of the facility created latitude for experimentation, the construction is the inverse of a typical wall section: the exterior is a 400-mm-thick cast-in-place concrete wall, with insulation and a rainscreen concrete block wall on the inside. In the past year since its opening, the exposed concrete has taken on some hairline cracks, which Hanson says are to be expected, and don’t affect the concrete’s strength. Over time, she expects that it will continue to acquire patina, with the once-pristine surface picking up urban pollution and the gutters darkened by water stains. “Once it gets dirtied up, it’s fine,” says Hanson. “It falls into line with the Gardiner [Expressway] and railway tracks, it fits in.”

The facility is currently surrounded with chain-link fences and hemmed in by adjacent construction sites. But in a few years, it will develop a public presence. The urban plans for the area include re-routing Lakeshore Boulevard to run directly in front of the site, bringing cyclists, pedestrians, and car traffic alongside a large window that invites views of the machinery inside. A new plinth, planned for the south side of the building, will create a public plaza centered on the sculptural landmark, looking over the road towards Lake Ontario.

A recently unveiled building, which punctuates Montreal’s eight-kilometre-long Promenade de l’Aqueduc, is intriguing. It stands out as an unusual object in a park, particularly striking on foggy days and at night, when it turns into a giant lantern. Officially a water intake station, this project is a far cry from the industrial, corrugated metal-clad buildings that usually house municipal infrastructures. Its striking presence was celebrated by the Ordre des architectes du Québec in its 2022 Awards of Excellence.

The 35-metre-long, 12.5-metre-wide, 9-metre-high box is set on a park-like promenade much appreciated by the neighbourhood’s residents, who kept a close watch over the project from the moment the City of Montreal’s Drinking Water Division made its intentions public. Smith Vigeant architectes, who were selected from a shortlist of three firms, fully understood what was at stake in terms of public acceptance. And they started dreaming. “We wanted to create a significant gesture that would go beyond the building’s function,” says architect Daniel Smith. “We were looking for a visual signature that would enliven the public space, while reminding passersby what a precious resource water is.”

The building plays an essential role in Montréal’s drinking water system, acting as a first clean-up station for raw water drawn from the St. Lawrence River. Four screening devices operate 24 hours a day, catching algae, branches, and other debris carried by the river. The only manual operation performed in the fully automated water intake facility is cleaning the screens on a regular basis. Once the water has gone through this primary process, it is channeled towards an underground conduit that leads to the Atwater Water Treatment Plant, 900 metres away. Ultimately, water treated in this plant will reach 40% of Montreal homes.

The program stressed the need for a highly secure and energy-efficient facility, which resulted in heavily insulated walls and a green roof. The planted roof not only addressed energy issues, but also was seen as one way of compensating for the loss of park space on the ground, a concern strongly voiced by the Borough of Verdun’s residents. Another major factor that impacted the shape and height of the building was the close proximity of high voltage power lines on the site.

The concept chosen by the architects appeared in their very first sketches, where they played with stripes of colour meant to represent the ever-changing nature of water. The green roof was present from the start, as was a dark mineral base, today made of concrete bricks in three tones of anthracite grey. The initial poetic intention remained paramount for both the client and the architect. “The building’s appearance and its impact on its immediate surroundings were top priorities,” says Daniel Smith.

The four façades in the windowless structure were clad with 30-centimetre-wide horizontal aluminium bands, painted in seven distinct shades, from almost white, to turquoise, to dark blue. Roughly 60 centimetres in front of this first layer is a second skin, made of vertical translucent glass panels. The superimposition creates a subtle shimmering effect and, rather unexpectedly, gives the façades a pixelated appearance.

One of the most evocative spaces of this intake station is the narrow corridor running between the façades’ glass and metal skins. Inaccessible to the public—as is the rest of the building—this service corridor will somehow remain as a fleeting presence, only to be seen by technical staff.

In its own modest way, this small intake station is linked to a remarkable tradition of architecturally significant infrastructural works. It may not be as eloquent as the grand Italianate Atwater Water Treatment Plant (1918) or as Toronto’s Art Deco R.C. Harris Water Treatment Plant (1941), which inspired Michael Ondaatje’s novel In the Skin of a Lion. But Montreal’s new water intake facility does emphasize the importance of investing in public architecture, however humble its function.

Quebeckers, who seem to live under a collective delusion that water is an unlimited resource, are among Canada’s highest users—and wasters—of domestic water. Hopefully, this rather unique project will help raise awareness of the essential role water plays in our lives and of the importance of using it wisely. Let us also hope the leadership shown here by the City of Montreal will have an impact on future infrastructure projects across Quebec and the rest of the country.

Water is life. Throughout human history, people have built systems that capture and convey this life-sustaining force allowing communities to grow and flourish. Today, while inter-jurisdictional uncertainties continue to complicate the provision of safe drinking water on First Nations reserve lands across Canada, bringing clean water to new municipal settlements like East Clayton in Surrey, BC, is a complex but achievable endeavour. Turning that infrastructure into poetry is next level.

The need for the Clayton reservoir dates back to 1996, when Surrey City Council identified East Clayton as a suitable area for new development. But it was only over the past decade that dense new subdivisions started rolling out across this former agricultural area and the shared unceded traditional territory of the Katzie, Semiahmoo, and Kwantlen Nations, who have been its stewards since time immemorial.

Designed by Local Practice, a Vancouver-based firm co-founded by Michel Labrie and Matthew Woodruff, the Clayton Reservoir earned a 2019 Canadian Architect award. Since its completion in 2020, it has largely fulfilled the design team’s goal: “to create an object of integrity without attention seeking,” in Woodruff’s words. He says that infrastructure like this is “foundational for a stable society‚“ and “should make visible the necessary work of living with dynamic natural systems.” Indeed, the water that feeds the reservoir is in constant motion, flowing from mountaintops through a vast downstream system of dams, water mains, and pump stations managed by Metro Vancouver, the body responsible for regional water service. Clayton is one of over 20 storage reservoirs near the end-point of the system, which fill up overnight to meet peak early morning demand. The increased storage capacity at Clayton will help the community weather increasingly warm and dry summers.

Woodruff’s involvement with the Clayton reservoir started in 2010, with a feasibility study that located the structure at the north end of a new park. This early decision was key to the project’s success, creating a strong edge to the green space, and making room for sport fields and other outdoor amenities. The reservoir will eventually double in size to meet demand as the neighbourhood is fully built-out, and Local Practice’s design accommodates this expansion through a mirroring of the plan to the north.

Design decisions are few, but effective at bringing down the perceived scale and mass of the reservoir. Rounded corners ease the eye around the edges, while a strong horizontal datum humanizes the height. Two patterns of undulating precast cladding modulate the surface, with a light gray billowing convex surface above, and a dark gray concave scalloped surface below.

Beyond its essential work, the Clayton Reservoir serves as a quiet backdrop to Hazelgrove Park. On sunny days, it acts like a movie screen, its surface alive with shifting sunlight, clouds and the shadows of waving trees. It’s a calming architectural presence, with a materiality that offers subtle visual cues to the important work going on behind the facade. Investing in infrastructure and making it visible is a noble goal. It would be wonderful to celebrate the delivery of clean water through beautiful infrastructure like this to all communities across Canada.

Courtney Healey is an architect and writer living and working on the unceded traditional territories of the xwməθkwə’yəm (Musqueam), Skwxwú7mesh (Squamish), and səlilwəta?l (Tsleil-Waututh) Nations.

In the Wake of Progress