On a gritty stretch of Toronto’s Gerrard Street east, the sturdy 3.5-storey building boasts a solid industrial pedigree. Purpose-built as a Home Hardware store in 1990, it was later repurposed into a manu­fac­turing plant for microphone headsets for police SWAT teams. And now, in its latest incarnation, PLANT Architect has transformed it into the headquarters of a music publishing and licencing studio.

When the clients purchased the space in 2013, “it was like a cubical farm in here, a labyrinth,” says Aporia Records president Gord Dimitrieff. Toronto’s PLANT Architect was enlisted to convert the five-level building into an office, rehearsal studios, event space and warehouse.

Befitting its dual purpose as both event space and music label head­quarters, Aporia Records has—unsurprisingly—a bifurcated interior. Guests are ushered into an open two-storey volume replete with a metre-wide glitter ball. The record label’s more serious work of music publishing and licensing is conducted in the rear mezzanine.

The project also required sound-and movement-proofing from the rumble of the street cars trundling three metres out the front door. In addition to these multiple program demands the clients requested corporate privacy. “We couldn’t function in an open plan environment because there is just too much music going on here most of the time and a lot of our business is on cell phones,” adds Dimitrieff. “You don’t want to be on the phone if someone’s playing music next to you.”

With exisiting fenestration only on the southern façade, the challenge for the architects was to cloister the deep interior workspaces without light locking the offices. “We use light and the transmission of light as the way of structuring space and giving it a clean feel but without the materials themselves being super crisp,” says PLANT partner Lisa Rapo­port, who led the project. True enough, the full floor-to-ceiling walled-in offices in approximately the same configuration where the cubicles once sat—is all light and expanse. By adding skylights to every upstairs space, ribbons of interior clerestory windows and translucent twinwall sidelights beside every door, the light pours out between rooms.

For the PLANT team, known for their comfort with multi-stage interventions, this conversion of an industrial space was by necessity a double-phase endeavour. Aporia needed offices immediately but there was a river running beneath the building. As a result, the upper levels were completed and main floor just demolished and painted when the staff moved into the upstairs pod in 2015.

In the second phase of the project, a double-doored, rubber-lined room on a u-shaped rubber channel rehearsal room was added to the front space. It is capped by a twin wall-clad balcony overlooking the entrance volume, lending the room a playful aspect. 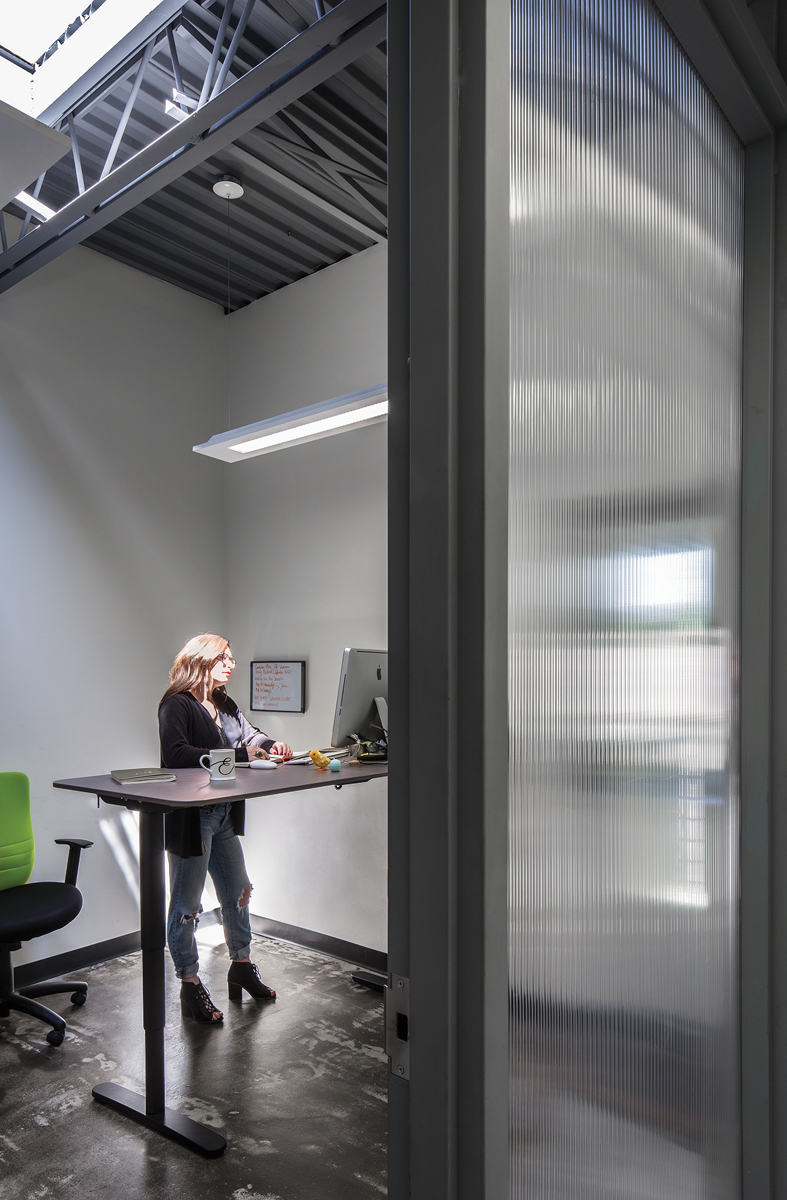 A restraint and consistency in finishes unifies the project and allows for light transfer. The existing hardware store steel stair and railings remained but were bolted with twin-wall acrylic cladding, echoed in the balcony and office sidelights. Galvanized doors were left unpainted to accumulate fingerprint patterns. Floors are polished concrete, some with undulating stripes from a residual epoxy finish, an approach which lends another industrial note.

The project works because of the rough simplicity of its materials and its rational floor plan. “There’s equipment moving in and out, and it needs to be able to function with those kinds of spaces,” notes Rapaport, referring to some sound gear stacked halfway up the central open stairwell. The gear would look haphazard in a more conservative or refined space, allows Rapoport: “If you had all that stuff out, you’d ask: ‘Who left that in the hallway?’” As it is, all that audio equipment forms a visual complement to the hard-wearing interior surfaces—perfectly in tune with its surroundings.

Laura Lind is a Toronto-based writer on design and culture.
Photos by Steven Evans.