The New Central Library in Calgary by Snøhetta, designed and managed in association with DIALOG, presents a captivating image with its bold form and its expressive cladding. The building shares some similarities with the transformative Grande Bibliothèque du Québec in Montreal designed by Patkau Architects (with Croft Pelletier and Menkès Schooner Dagenais architectes, 2005). Both occupy inauspicious sites not normally associated with major cultural institutions. And both rise to the challenge of their respective locations, to create urban buildings of crucial public worth.

In many ways, the New Central Library is the product of a series of decisions made in the 1970s and 1980s. During that period, the new C-train light rail transit system opened (1981), the Calgary Municipal Building by WZMH Architects was completed (1985), and Olympic Plaza was inaugurated for the 1988 Winter Games. The plaza became modern Calgary’s major civic space, supporting the city’s important institutions, including the dreary former main library. However, the instigators of the Calgary Municipal Building— a large blue-glass modern building facing Olympic Plaza—made two major blunders. Firstly, a decision was made to build across 8th Avenue SE (also known as Stephen Avenue), blocking the continuity of one of downtown’s major streets. Secondly, the building turns its back on the adjacent East Village, a then-derelict area that has in recent years been rejuvenated with new condos and institutions.

When the Calgary Municipal Land Corporation, in charge of revitalizing the East Village, decided to embark on a New Central Library with an RFQ in 2013, the daring decision was made to locate the new institution due east of the Municipal Building. The site straddles the interrupted 8th Avenue and incorporates a curving section of the southbound C-train lines. The architectural mandate was to create a building with an urban presence, despite the oddities of its site. 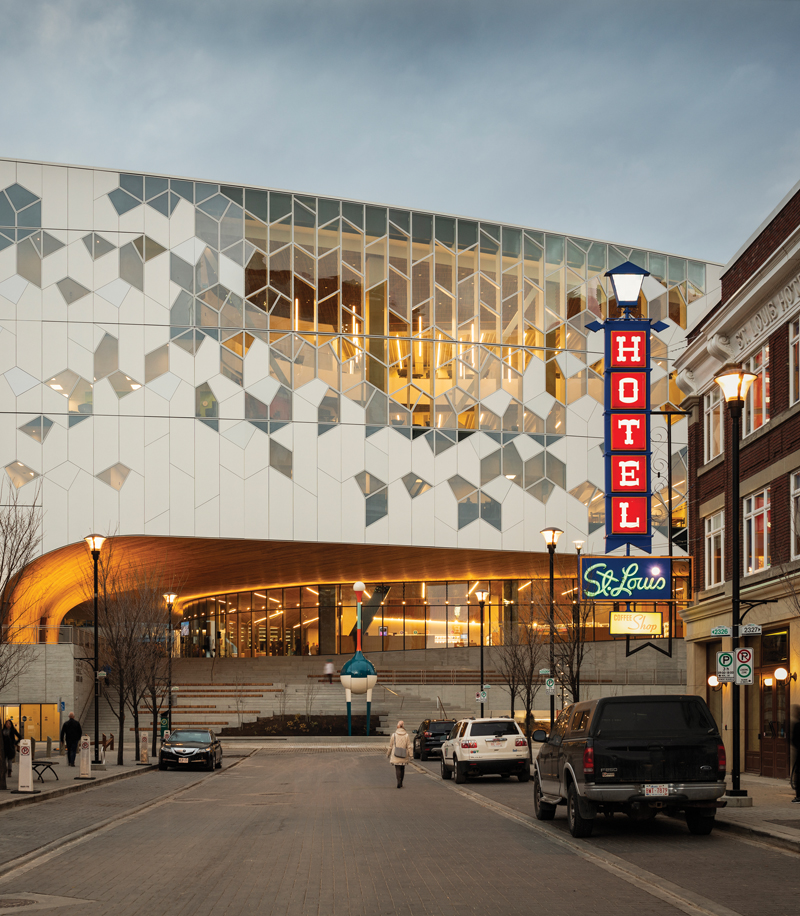 The site constraints drove the development of the plan, as building over the light rail lines required significant encapsulation and structural ingenuity. The eastern perimeter of the library follows the arc of the C-train lines that pass under the building, and the mirroring of this arc creates the primary form of the design. A secondary form houses support services. The resulting building is like a vessel floating over infrastructure, which is clearly reflected in early concept models. To further address the ruptured urban fabric, the design carves a large exterior passageway through the building that continues the alignment of the avenue. Lined in beautifully detailed Western red cedar, the large archway has a memorable sweeping profile suggestive of a Chinook arch, Calgary’s dramatic winter cloud formation.

Entering the library, one is immediately immersed in a spacious hemlock-lined atrium, with a play of wood-slat planes rising above towards an immense skylight. The atrium structures the primary vertical circulation, including a superb stair system. The integration of the stairs into the atrium affords changing views as one ascends; for example, a large window into the children’s library provides an animating moment. Within the overall circulation strategy, there is also a conscious decision by the design team not to extend Calgary’s controversial +15 system into the building or to use escalators. As a result, users are invited to fully explore both the urban and tactile dimensions of the scheme. The building is organized with a simple, intuitive logic within its envelope. The consistent use of wood and concrete throughout is essential to the experiential aspects of the design.

Bill Ptacek, CEO of the Calgary Public Library, notes that the library is organized from “fun to serious” as you ascend, with a series of strategically located experiences punctuating the more generic aspects of the program. These include an express area, where users can quickly pick up and drop off materials, and a performance hall near the entry. A café on the mezzanine is paired with attendant lookout and gathering spaces facing north. A large children’s library cascades down along a set of gently terraced levels, and features a series of house-like play structures.

As one moves up through stacks, working areas, and a two-storey lounge on the third level, there is a constant sense of surprise, along with an overall feeling of calm. The vertical sequence culminates in the TD Great Reading Room on the top level. With its emphasis on fine woodwork and its oval form, it recalls historic reading rooms in grand institutions. It is easily the best space for reading and researching in Calgary. The Prow, at the north end of the building, affords users intriguing views of the surroundings, and is a prime place for watching C-trains pass under the structure. Both Ptacek and Rob Adamson, FRAIC, principal of DIALOG, speak highly of the collaboration between the architectural firms, the client, and Stuart Olson’s construction team in achieving the final results. Overall, the quality of materials, assemblies and details is excellent.

Much of the building is clad in a thick wall system distinctively patterned in polygons reminiscent of beehives. Snøhetta partner Craig Dykers notes that the geometric pattern also evokes the ice crystals that can form on winter days. The system was fabricated by Calgary-based Ferguson Corporation, and the openings are appropriately correlated with the overall volume and with the needs of the spaces within, opening up from solid towards more glazed areas at the northern tip. Dykers describes the careful arrangement of glazing to avoid creating a “glass ghetto,” and the effort by the team to rationalize the production of the patterning. Ultimately, the delightful geometries of the exterior give the library much of its character.

Given the location, the design will challenge the vitality of Olympic Plaza, as the library shifts the civic balance in the downtown towards the east and the emerging East Village district. The library also plays off the mute east façade of the Municipal Building and will put increased pressure on the City of Calgary to reinstate the broken continuity of 8th Avenue SE by driving an opening through the building. The high-quality design work extends to the landscape elements surrounding the library, including ramps, stairs, plantings and a well-executed board-formed concrete wall on the east side of the building. All of this locks the whole arrangement onto the site.

Dykers is excited that members of local Indigenous communities feel that the building has a “spirit.” No doubt the shape of the building and its design features use a range of metaphorical devices that both connect the building to its Calgary context, and create evocative moments for the library’s patrons.

Today’s libraries are vital gathering places, occupied by a wide range of users seeking information, stimulation, socialization and entertainment. Libraries are much more diverse and active than they once were. Albertans love their libraries: Calgary’s library system boasts over 670,000 card-carrying members, in a metro region with 1.37 million, and tens of thousands of people showed up to celebrate the opening of the new institution.

The New Central Library will undoubtedly be heavily used by Calgarians, as it posits new urban and institutional experiences, and ultimately transforms patterns of behaviour in the city’s downtown core.

Graham Livesey, MRAIC is a professor in the Master of Architecture program at the University of Calgary.

Canada’s Infrastructure of the Future