In Quebec City, as elsewhere, one rarely sees a parking garage worthy of attention. But a new five-storey structure on the city’s periphery makes a delightfully bold statement. The building of this unusual shopping centre parkade however was the result of a series of coinciding events. For a start, the owners of Place Sainte-Foy, Quebec City’s very first mall, were facing the need to replace an existing parking facility that had long been considered an eyesore. New planning regulations had just been adopted in an attempt to make the area more amenable to local residents. Municipal authorities eventually agreed to a zoning amendment on condition that the architects come up with a visually compelling concept.

Ivanhoé Cambridge, who built the mall in 1957—and still owns it—hired Coarchitecture, a well-known Quebec City firm to design the structure.

The firm has developed over the years a strong reputation for its innovative use of materials and its environmentally sound approach to building. It has also attracted attention for its increasing design capabilities. 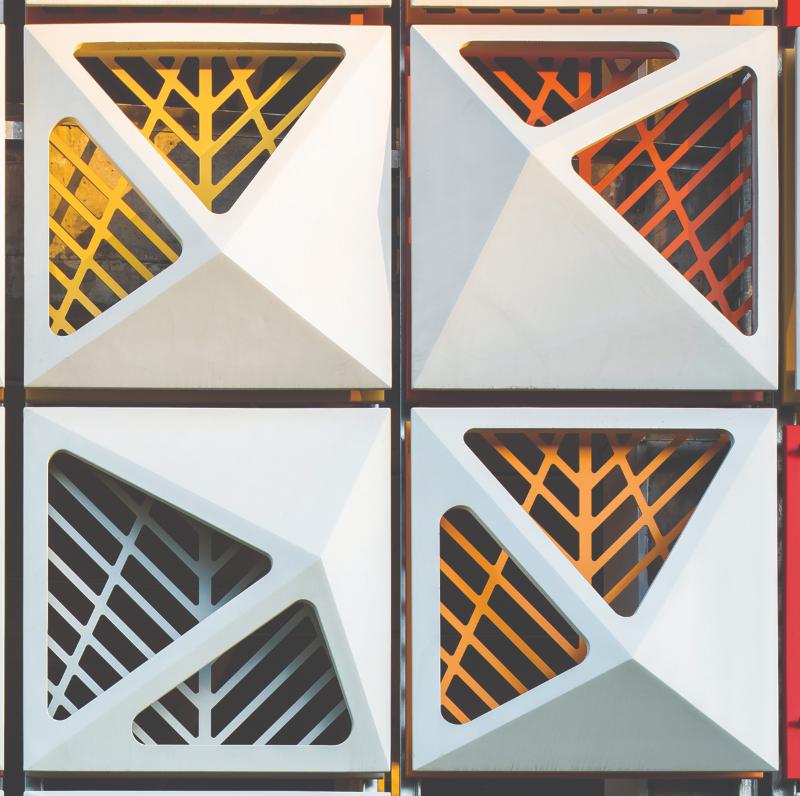 The program was simple, yet challenging: it called for a naturally ventilated building that would appeal to the eye, enhance shoppers’ experience, and hide from view up to 700 parked cars. The idea of an urban forest came up as the architects searched for a narrative. The site is located on territory once covered with giant oak trees, eventually harvested and shipped to England. According to Normand Hudon, Coarchitecture principal and project director, “A stylized oak leaf was the inspiration for the design of the perforated aluminum panels used as the building’s main cladding.”

Painted in shades of red, yellow and off-white, these identical 5’ x 5’ panels are bolted to metallic columns anchored to the parking structure. The concrete slabs were poured in place with the rim beam extended upwards to serve as protection along the perimeter.

The modulating of the façade came out of the introduction of concrete “pyramids,” open on two sides and placed over parts of the metallic cladding to create a dynamic effect. The rotation of these elements and their clever positioning over the lace-like underlying motif serve to animate the façades. The modular approach adopted by the architects was also a reference to an early pavilion built on the nearby grounds of Laval University.

A new type of high-performance fibre-reinforced concrete (HPFRC) was used for the pyramidal modules. Still not used on a large-scale in North America, it is basically the same material that generated widespread attention when the Musée des civilisations de l’Europe et de la Méditerranée (MuCEM) in Marseille, designed by French architect Rudy Ricciotti, opened a few years ago. Among its many properties, such as its higher density and its great resistance to freeze-thaw cycles, this type of concrete can be tinted and poured into moulds, opening countless possibilities for designers.

To complete the urban-forest analogy, the architects introduced contrasting grey concrete panels evoking tree trunks at street level. The shopping centre is connected to this first parking structure through a glassed-in upper-level link and a protected ground level access. The success of the operation soon led to a second similar structure that  is currently nearing completion.

Imagination and talent played an immense role here, as did the introduction of this fibre-reinforced concrete technology. Although its artistic potential is still not widely recognized on this side of the Atlantic, the Place Sainte-Foy Parkade may well inspire architects to look more closely at this versatile material and the wonders it can create.