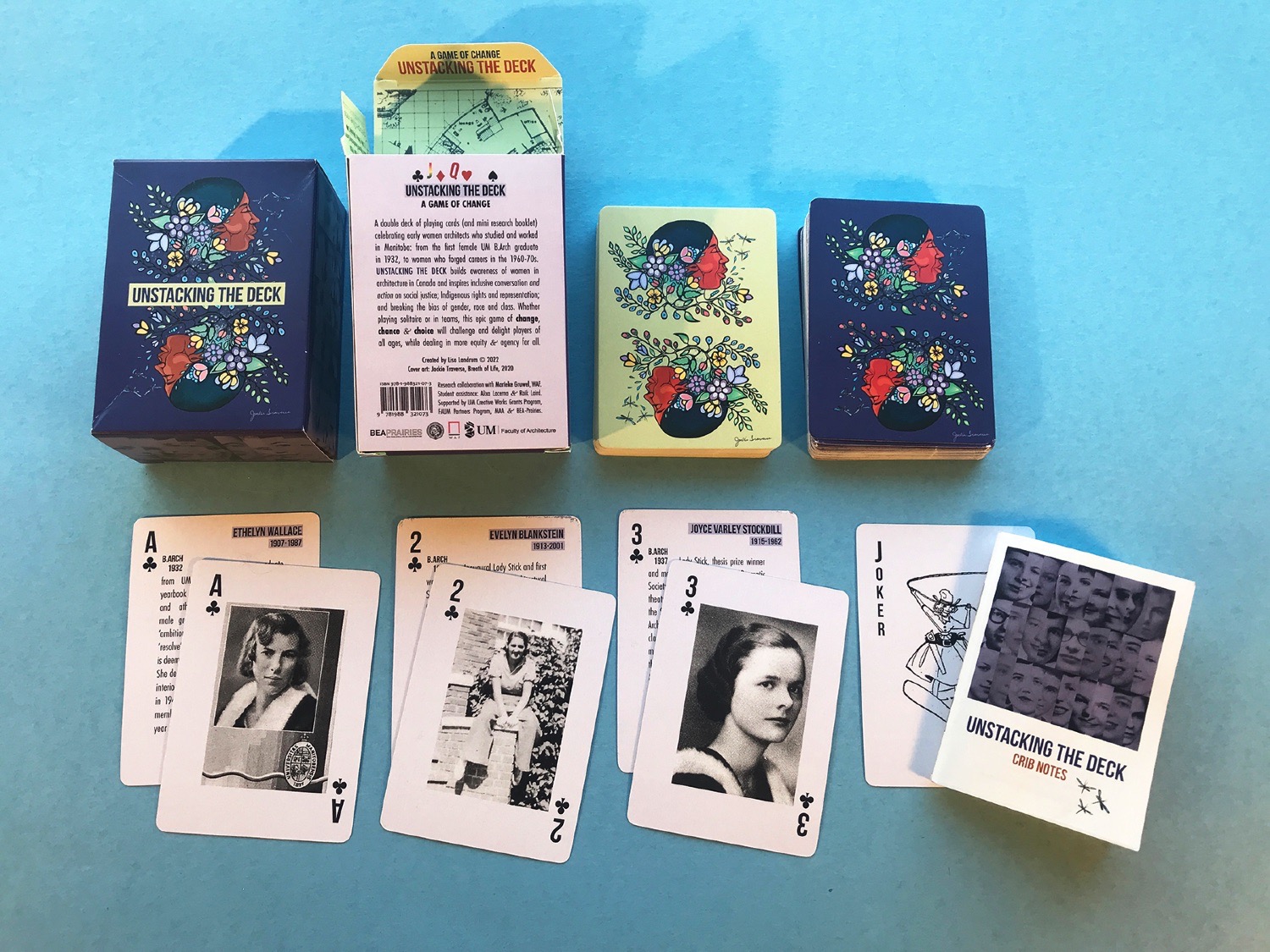 In 2011, a student asked architect and historian Lisa Landrum, an associate professor of architecture at the University of Manitoba’s Faculty of Architecture: why were women absent from the architectural history curriculum?

It launched Landrum on a decade-long research project to redress the gender balance in her teaching—and in the design history of her adopted home province. One of the results of that work is a double deck of playing cards released this spring. 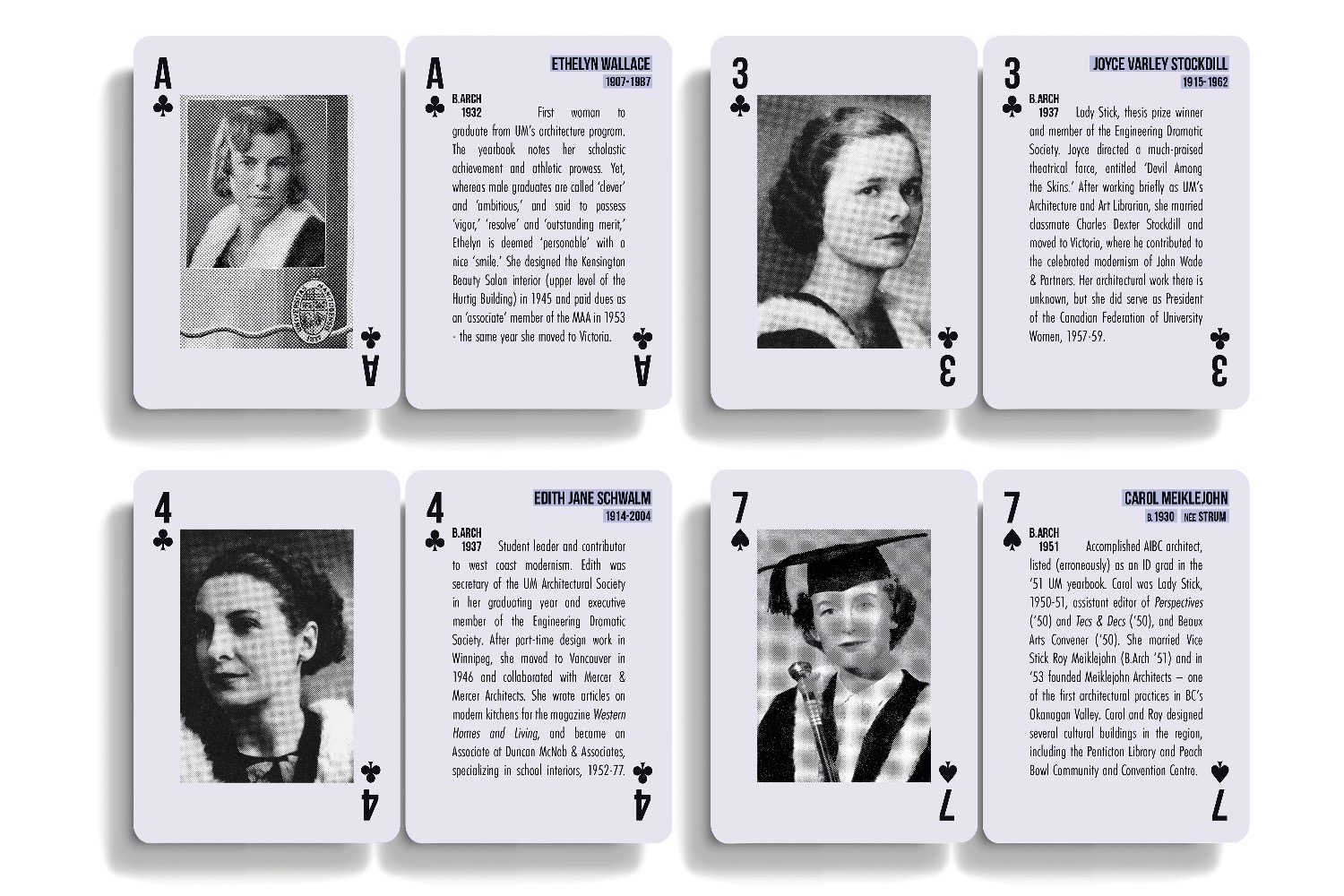 The cards celebrate early women architects who studied and worked in Manitoba, from Ethelyn Wallace, the first woman to graduate from UM’s architecture program, in 1932, to Gerri Stemler (née Holland), who became the first woman president of the Manitoba Association of Architects, in 1998. It also includes women who forged careers in the 1960s and 1970s, such as Lana Kinoshita (née Cheung), an early graduate of the UM interior design program—founded by Joan Harland, who also figures in the decks.

One of the two decks includes photos of the women; the second features capsule bios. A research booklet provides sources and prompts for further investigation. “Players can invent games to match women with their story, play any regular card game, or use them for trivia and as mnemonic devices,” writes Landrum. 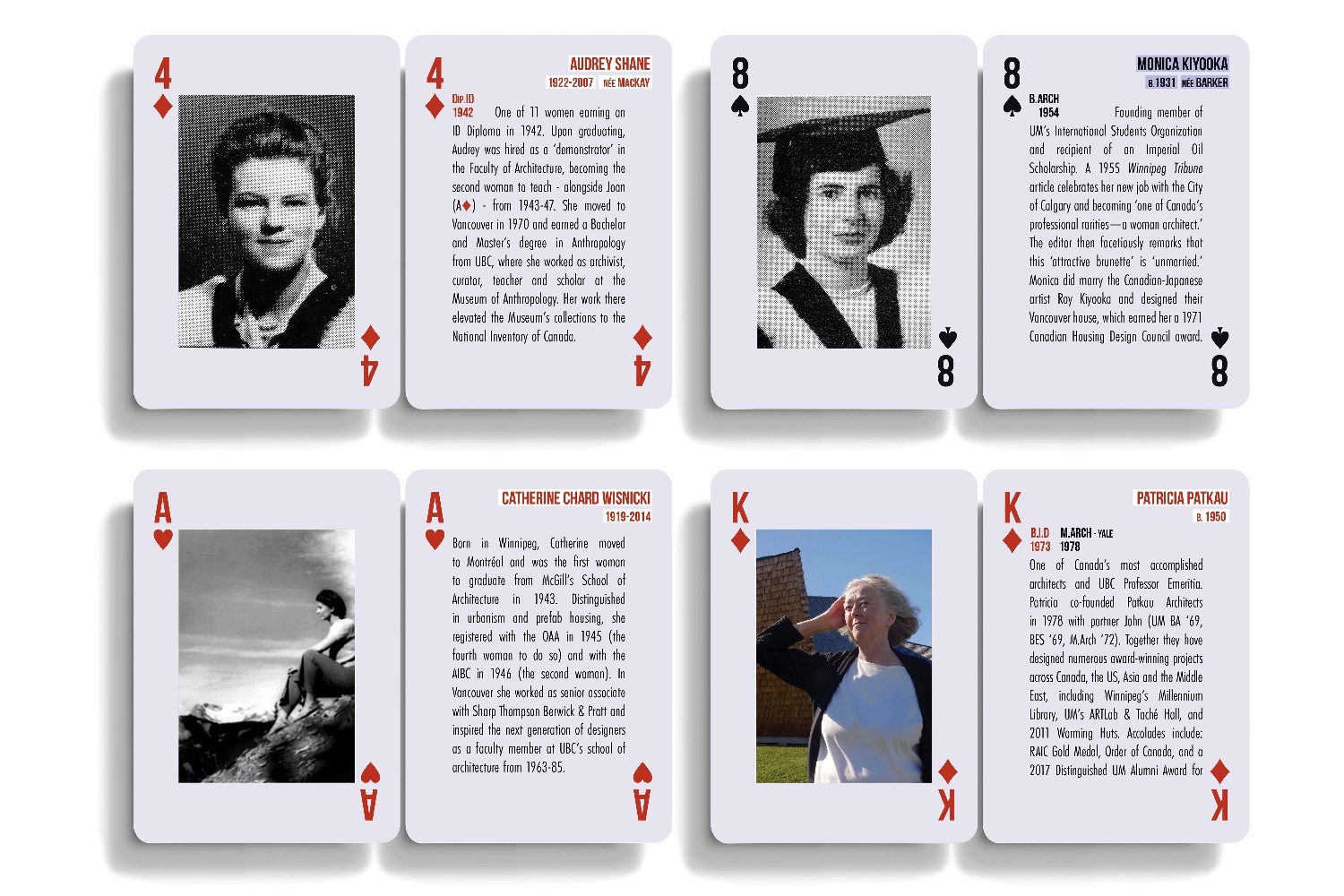 The research for the cards was conducted in collaboration with Marieke Gruwel, an art and architectural historian with the Winnipeg Architecture Foundation. Much of the material was gleaned from the university’s yearbooks, which yielded both dignified cap-and-gown portraits, as well as evidence of comparative bias: while male graduates from 1932 were characterized as clever and ambitious, Wallace is deemed to have a “nice smile.” The yearbook speculated that Patricia Kettner, who obtained her B. Arch sixteen years later, wanted to marry a millionaire. “In fact,” notes the biography on the cards, “she immediately joined GBR, designed schools, hospitals […] became the third woman to register with the MAA in 1953, then moved to Nelson, BC, to work with a women-led firm.” 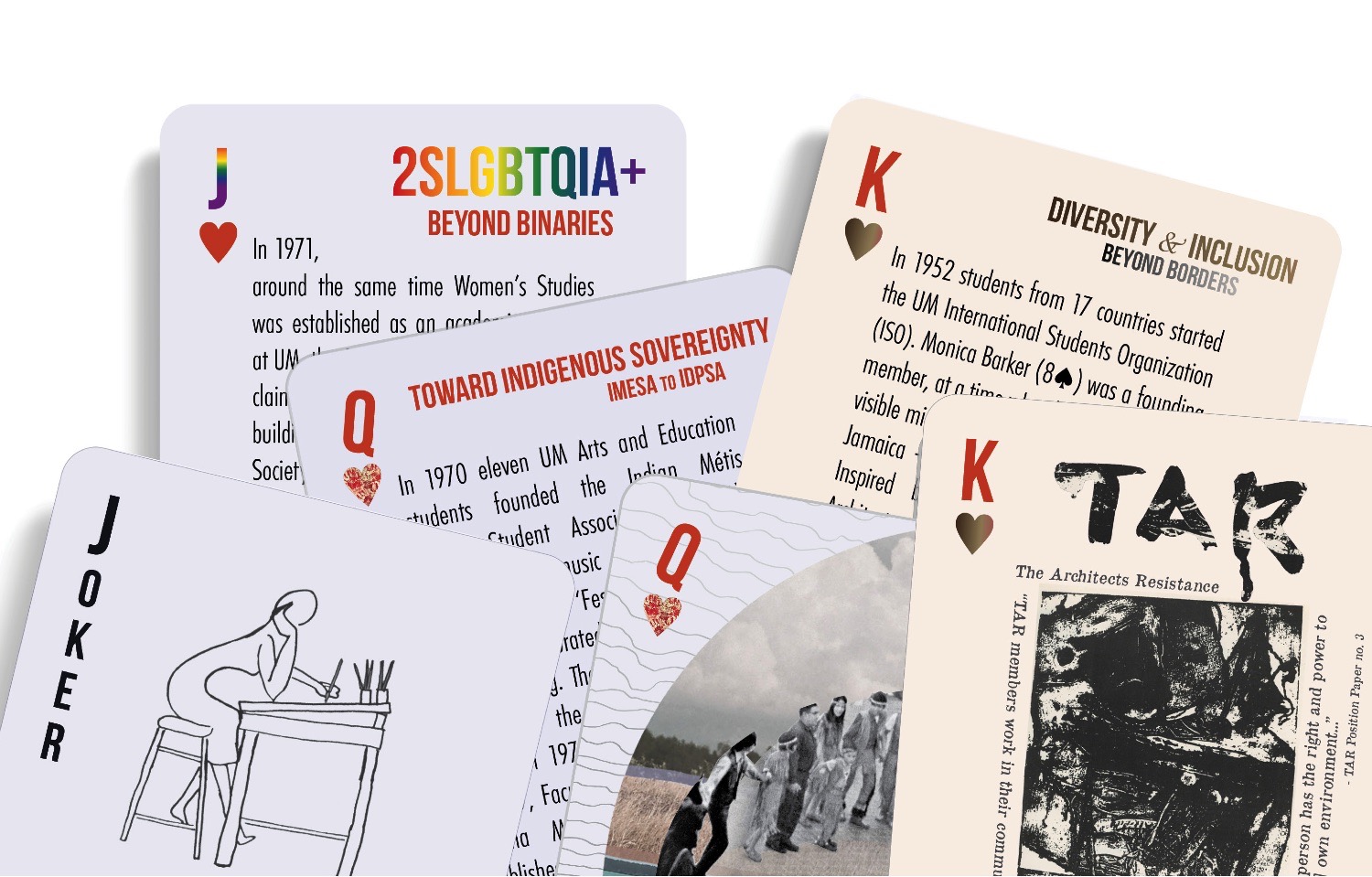 A trio of special cards open doors towards further action needed to address equity and inclusion. The Jack of Hearts highlights the need to go beyond gender boundaries, noting that the UM Campus Gay Club was launched around the same time as the Women’s Studies program, in 1971. The Queen of Hearts points toward Indigenous Sovereignty, putting the spotlight on the recent founding of the Indigenous Design and Planning Students Association. The King of Hearts turns a lens towards racial diversity, looking back to the 1950s, when barely a handful of visible minorities had studied architecture at UM. 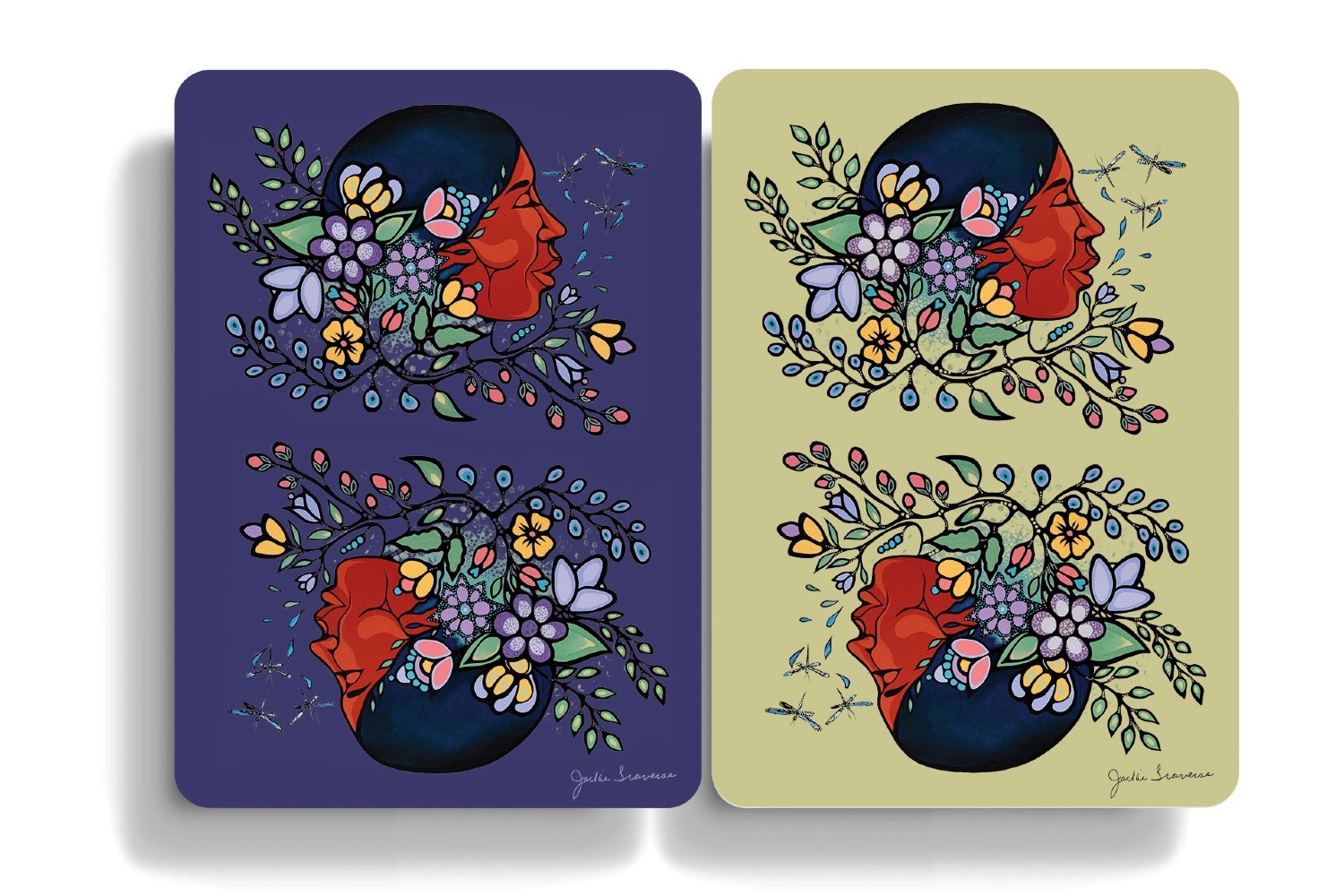 The cover art on the cards incorporates the painting “Breath of Life,” by Ojibwe artist Jackie Traverse. The art depicts an Indigenous woman encircled with blossoms and dragonflies. “The woman in the painting may be exhaling her last breath, wishes or words,” writes Landrum, “but her breath embodies a powerful circle of life, transformation and transcendence.”

Likewise, Landrum sees the cards as bridges towards transformative inter-generational conversations. “Most of the women in the deck are no longer living,” she says. “But they’re still speaking to us, if we care to listen.” The double deck of cards, box and 60-page min-booklet can be purchased here.