The Temple of Light sits atop a cliff overlooking Kootenay Lake in British Columbia’s interior, an area that has historically been home to the Sinixt and Ktunaxa nations. The building, designed by Patkau Architects and completed in 2018, seems to be made for its site. But for the community of Yasodhara Ashram, it’s actually the third version of the Temple.

The first version of the Temple of Light was a virtual one—well before the era of digital simulacrae. The Temple made its initial appearance in the dreams of Yasodhara Ashram’s founder, Swami Radha. Born in 1911, she lived through both world wars before emigrating to Canada. In the 1950s, she traveled to Rishikesh to study with the well-known Swami Sivananda. She eventually took ascetic vows before returning to Canada to spread their yoga teachings. Throughout her childhood, she had a recurring vision of a light-filled round temple overlooking a bay, with many windows and doors. In 1964, Swami Radha established a religious community on precisely the sort of lakeside site that she had seen in her dreams. The community laid a central stone to mark the location of the future structure, but for decades the Temple existed only as a guiding image for the community. Finally, in 1992, a physical temple—a white, octagonal structure—was completed. Throughout its construction, Swami Radha emphasized the inherently symbolic nature of the building. For her, its physical manifestation was a kind of emanation, or translation, from what she called the Unseen. She even kept a small model on her meditation shrine, which she removed once the Temple had been completed.

The 1992 Temple endured as the spiritual centre of the community’s ensemble of buildings and gardens until it was suddenly destroyed in 2014, by an unexplained fire. The loss was profound for the Ashram’s residents, as well as for its global network of yoga centres, teachers and students. The news shocked me, too, having grown up in the area, in which the Temple is a well-known landmark, and spent a summer living at the Ashram as a teenager.

The community’s leadership was quick to announce their intention to rebuild. To my happy surprise, the commission eventually went to Patkau Architects—a firm whose international renown seemed outsized for the Ashram’s comparatively modest aesthetic sensibilities. As I discovered in conversation with John Patkau, the architects themselves were also pleasantly surprised at the sophistication implicit in the Ashram’s receptivity as clients to their firm’s highly experimental proposal.

The West Kootenays have a long history of being on the fringes of convention. When the Yasodhara Ashram was founded, the area was in the midst of receiving an influx of Vietnam War draft dodgers, who imported U.S. counterculture to the region and its homesteads, many of which were self-built. The form of the first Temple seems to nod as much to the domes of Abrahamic religious architecture as to the geodesic dome, an enduring symbol of postwar “hippie modernism.”

In the Temple’s most recent incarnation, mystical and architectural modes of imagination and representation converge. The Patkau-designed Temple is iconic in a way that remains coherent with the region’s sensibilities. Acknowledging the history of the Temple, with its ambivalent relationship to the material world, the design sets the solidity of the original octagonal dome into motion. An aesthetics of matter-as-movement happens to be coherent with the Patkau’s current research on complex geometries.

Today, Baroque-like dynamic forms are often linked to parametric design. But where parametricism works “top-down” from abstract principles, the Patkaus take a “bottom-up” approach to arrive at their complex geometries. Their starting point is a careful study and testing of the standardized materials of the contemporary building industry. With projects like the Winnipeg Skating Shelters, they focussed on the manipulation of standard sheets of plywood, finding possibilities for bending the sheets into structurally stable forms. Their research has since moved into pushing the formal possibilities of dimensional lumber. Responding to an open design competition for Daegu Gosan Public Library in South Korea, they proposed a timber shell structure made from staggered four-by-eight and four-by-fourteen members, clad with a triple layer of half-inch plywood.

While they were not selected for the South Korean library, the Temple of Light provided a chance to test this material research at the scale of a building. A structural system of standard two-by-fours is at the heart of the building, contained within the white cladding of the eight petal-like forms which define the building’s envelope and are integral to its structure. Each petal is a smooth curve formed by the straight lines of the lumber. The petals, together with an octagonal frame, act monolithically as a shell structure.

The Temple’s structural system is best appreciated through distinguishing it from other curved geometries. Whereas a building like the Guggenheim Bilbao depends on a rectilinear steel frame, upon which the curved enclosure is hung, the Temple of Light arrives at its tectonic rigour through a form that is fully integrated with its structure. The curves derive from the application of plywood onto a wood frame that has much in common with stick frame construction. But unlike standard construction, the frame is elegantly reworked through distorting its linear members along the joists in order to produce its curvature. In geometric terms, this form is called a “ruled surface”: a plane defined by a sweeping line. 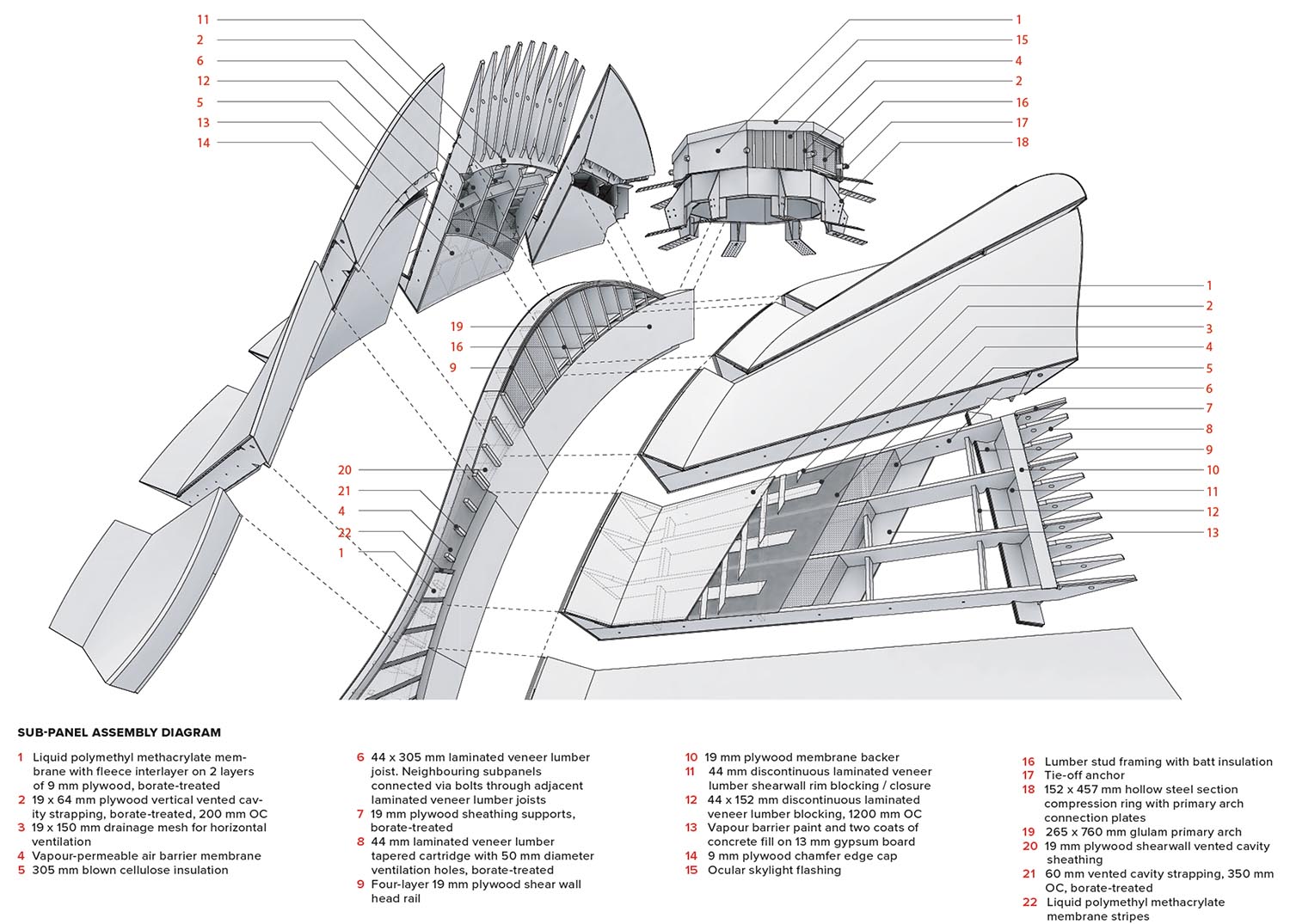 In the Temple’s structural system, this means that each beam contacts the plywood sheathing along its full length. The curvature of the plywood traces a trajectory that is defined by the linear members themselves, meaning that the complex geometry of the petals’ external form is fully integrated with their structural system. Further, the petals are themselves integral to the structure of the building as a whole. While they work together with a glulam octagonal frame, the gravity and wind loads are carried by a system that depends upon the petals’ structural capacity. In short, the Patkaus have achieved a building-scale system whose complex geometry is matched with an entirely coherent tectonic logic. There is something fittingly North American about inflating the balloon frame into a curved form. It is also a significant shift from the excesses of parametric design, setting complex geometries on a more rigorously tectonic footing.

While relatively modest in size, the Temple of Light constitutes, in John Patkau’s estimation, one of the more important achievements of his career. Yet he never anticipated that the long-awaited opportunity to scale up his firm’s material research would come from a retreat centre in the West Kootenays. Further adding to the designers’ surprise was the exceptional expertise of digital fabricators Spearhead—an internationally-reputed company based in the area, located just across the lake from the Ashram site. This allowed prefabrication of the building’s components to take place locally and for them to be transported directly to the site by boat, rather than coming by truck from the Lower Mainland, as the Patkaus had originally planned.

The exceptional, if surprising, cultural sophistication of the West Kootenays as a whole remains a well-kept secret. That may soon change: the disciplines of architecture and architectural history are starting to acknowledge the significance of rural areas in a new way. A current Guggenheim exhibition curated by Rem Koolhaas entitled Countryside, the Future is notable mainly because it issues from the infamous author of Delirious New York. In Canada, our rural regions have long been potential sites for exceptional formal experimentation. They might also form a horizon for architects to revise the urban/rural binary in Canada.

Scenic (and all too Instagrammable) regions like the West Kootenays have recently started to attract a new sort of  ex-urbanite. Throughout the twentieth century, rural idylls have been a destination for people looking to escape the city, but this has been enabled even more in recent decades by the increasing normalization of working remotely online. Today’s COVID-19 crisis has forced us to see the city almost purely in terms of risk, and to implement online work and education at a massive scale. It follows, then, that in the coming years, we will likely see more and more people making good on the postwar counterculture’s injunction to go “back to the land.”

What could it mean for the countryside to be the future of Canadian architecture? If it looks anything like the Temple of Light and the tight-knit community of the Yasodhara Ashram, we might find it to be a bright future, indeed.