Franco-Ontarian heritage spans over 400 years. When the CPR transnational railway arrived in Greater Sudbury (Grand Sudbury in French) in 1883, a large number of French speakers from Quebec moved to the area to work in agriculture, mining, and forestry. By 1911, Francophones represented 35 percent of the area’s population, and they remain 25 percent of Sudbury’s residents. The impact of la Francophonie is reflected in the city’s institutions, including the Jesuit Collège du Sacré-Coeur, a French-language educational institute established in 1913 that led to the creation of the University of Sudbury in 1957. Over time, generations of Francophones growing up in Sudbury ever more strongly embraced their uniquely French culture. In the 1970s, while nationalism was surging in Quebec, Grand Sudbury was the epicentre of its own Francophone ‘serene revolution,’ including the “Nouvel-Ontario” movement, a collective of young artists which fought—and succeeded—in forging a distinctive Franco-Ontarian culture and identity.

Those cultural and historical roots are still bearing fruit today, most recently made visible in the lyrical and urbane Place des Arts (PdA), which opened at the end of April. Designed by Moriyama & Teshima Architects in joint venture with Bélanger Salach Architecture, the long-awaited Place des Arts addresses Elgin Street and brings together seven key Francophone arts institutions in a single stunning facility.

Place des Arts’ weathering steel planes slide past and intersect with one another, alluding to Sudbury’s industrial heritage, while its interior reflects Francophone history, rigorously displayed through historical artefacts placed in-situ. The building’s long horizontal stone plinth echoes the Canadian Shield and large areas of glazing are strategically placed to amplify urban activity or frame vistas. The client-artists challenged the design team to forge an architectural framework equal to the artistic vision of the Francophone community of Grand Sudbury—now translated into an architecture that feels both contemporary and comfortable, with a familiarity as if it had always been there.

At its source, the movement known as le Nouvel-Ontario embodied a cultural explosion in literature and the arts in northern Ontario that was centred in Sudbury; a movement whose effect was as dynamic as the meteor impact that created Grand Sudbury millennia ago. This “artistic explosion” remained a powerful metaphor for Place des Arts’ founding president, Stéphane Gauthier, who penned a historical manifesto to guide the PdA project. “Through the Coopérative des artistes du Nouvel-Ontario (CANO), [artists] achieved an unprecedented and momentous extension of their sphere of resonance,” he writes. “They founded institutions that provided new means for ongoing cultural expansion,” he continues, adding a list of Franco-Ontarian ‘firsts’ created by the group. “First professional theatre company. First publishing house. First province-wide popular music festival. First art gallery.” 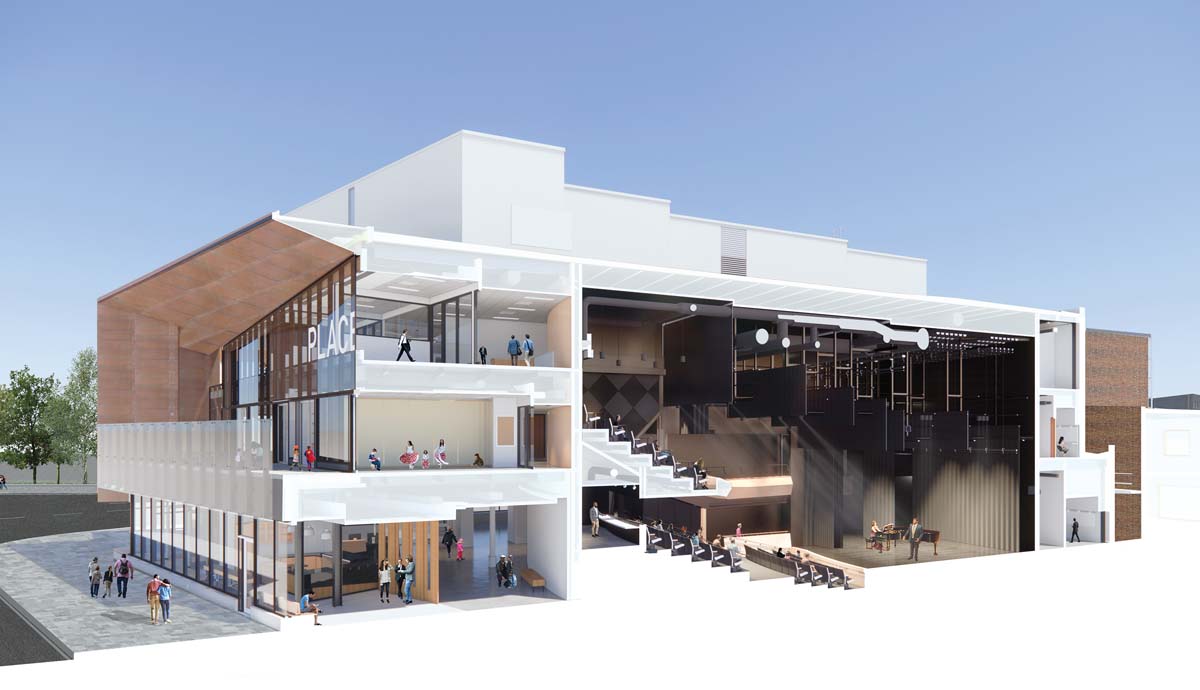 A second metaphor for the project, ‘Under one roof,’ is elegantly express­ed in the Place des Arts’ logo, designed by Christian Pelletier of Studio123. Instead of continuing to compete for grants or pay for separate real estate scattered throughout Sudbury, these seven cultural groups agreed to join resources, adding an eighth partner in the Place des Arts itself.

At ground level, Place des Arts’ plan is organized around three public rooms dedicated to the creation and performance of contemporary art: the main theatre, a black box theatre and a white box gallery. But much of the place is open to all with no admission fee. Greeted by an external welcome bench and canopy, one enters past a librairie-boutique that will sell books, crafts and other local merchandise. En route is a reception desk for tickets and information, followed by a long triangular space named the salon, which invokes the idea of a living room. The salon is defined by a curved exhibition wall, currently displaying names of key donors and black-and-white photos of Francophone artists from the 1970s; the temporary exhibition faces the café’s dining area. One immediately experiences the vibrancy of Le Bistro, facing Elgin Street, as a gathering place for flâneurs as well as a spot for fostering potential collaborative synergy among the PdA’s multi-disciplinary artists.

Juxtaposing old and new was a driving force for the project, beginning with the reuse of part of the foundations from the 1905 King Edward Hotel that once occupied the site, as well as using over 800 of its bricks in the interior. Throughout, the building imaginatively reveals a series of collected artefacts within its walls. The pressed-tin ceiling from Sudbury’s 1914 École St. Louis-de-Gonzague is tucked under a plane of Corten in the bookstore-boutique, pointing to a site of Francophone resistance against cultural assimilation in the 1920s. Bread pans from Sudbury’s Canada Bread create a patinated wall near the bistro, recalling a company founded on cooperation prevailing over competition amongst major bakeries. Salvaged white pine beams from Chicago are repurposed as benches, a clin d’oeil to the northern Ontario forests used in rebuilding Chicago after its great fire of 1871. Through the language of bricolage and adaptive reuse, each artefact offers a window into history that resonates with the Francophone community’s focus on cultural heritage as storytelling.

Behind the curving wall of the salon lies La Grand Salle, a 299-seat theatre whose deep stage and proscenium are shrouded by a serene, wood-lined interior, providing excellent acoustics and intimate sightlines. Bélanger Salach principal Amber Salach recalls the technical gymnastics, including neoprene gaskets and structural separation, required to achieve a quiet performance hall across from CP’s downtown railyards. Adjacent is Le Studio Desjardins, a black-box theatre designed as a flexible space for both rehearsal and a variety of performances. Third in the sequence is the Galerie du Nouvel Ontario. With its Palladian-scaled white cubic interior and large partition doors, the art gallery is both a beautiful room and a flexible exhibition space. One windowed wall with large shutters faces Larch Street, connecting the gallery to the urban streetscape, while the opposite gallery wall opens onto the public salon, with views across to the bistro bar. 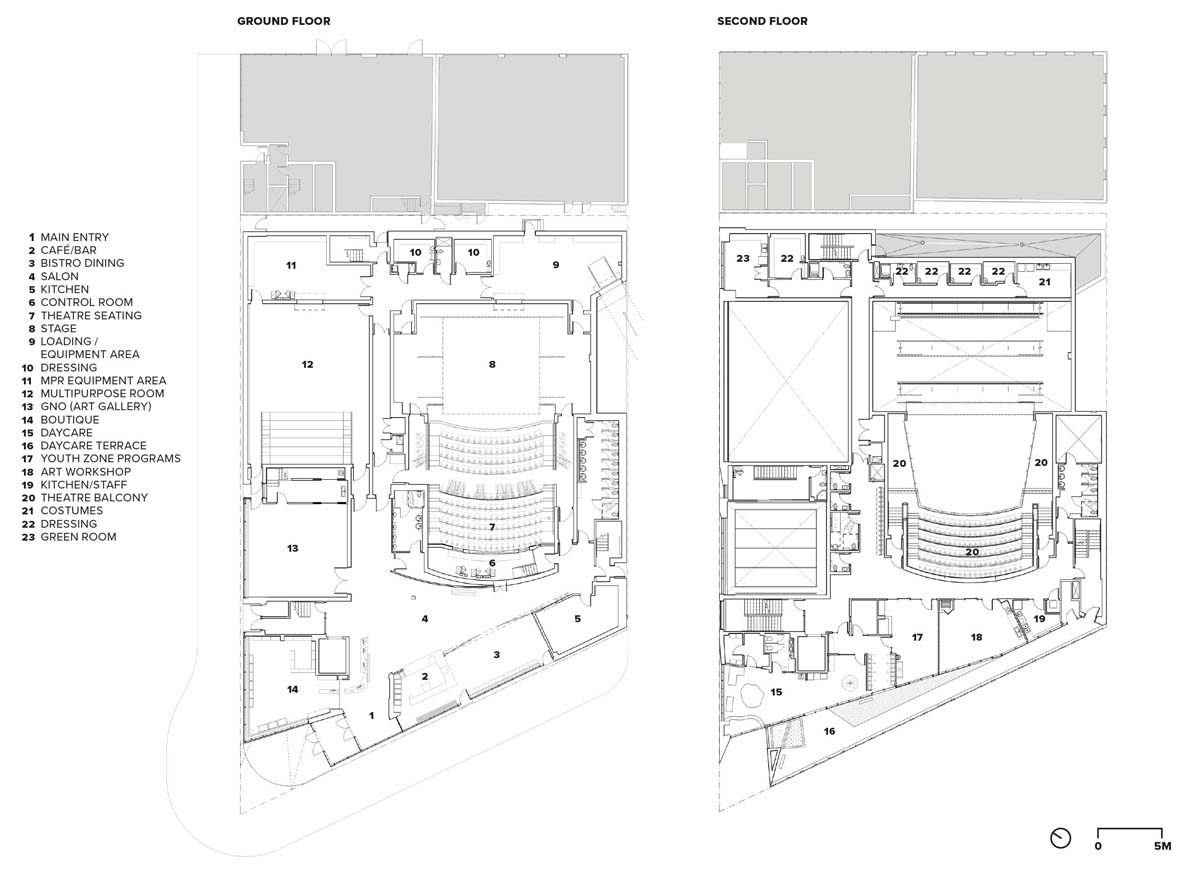 On the second level, a daycare with a large protected exterior terrace offers views overlooking the railyards; the floor also includes a multi-functional youth zone, art workshop, and theatre support rooms. The third level of the building includes PdA administration, comprised of offices, collaboration spaces, archives, library, and a meeting room shared between the organizations. Throughout the PdA, the graphic signage for wayfinding in multiple languages is punchy and crisp, adding another layer of artistic narrative.

Brian Rudy, partner at Moriyama & Teshima Architects, muses over the duality of the clients wanting a “signature building” for the arts community at the same time as wanting “a welcoming house” grounded in Francophone culture. The inclusion of the bistro and the daycare are programs that PdA believed would help create an intergenerational building open to the wider Francophone community. For Louis Bélanger, a Franco-Ontarian architect who had often done work for the individual arts groups in the past, the experience was deeply personal; he remains extremely proud of the scale, materiality, and cultural meaning achieved in the overall design.

The Place des Arts’ tagline is: “A centre of artistic and cultural excellence and a gathering place for Francophones and for the whole community.” A few short months after opening, it is handsomely fulfilling this mandate, thanks in no small part to a building that embodies the organization’s mission. The design gains its strength from a delicate balance: the architects have crafted a building whose scale is intimate and image is welcoming while, at the same time, creating a timeless signature piece for downtown Sudbury. The result is reminiscent of the wonderfully ambiguous spaces designed by Dutch modernist Aldo van Eyck in the 1960s. The PdA remains both a cultural institution and an urban “living room,” with the Grande Salle’s performance space at its heart. It is here, in this convivial place, that le Nouvel Ontario will continue to give birth to successive generations of talented artists.

Terrance Galvin, FRAIC, is Founding Director and Professor at the McEwen School of Architecture in Grand Sudbury, Ontario. This article is dedicated to the memory of Paulette Gagnon, North Star of the Place des Arts.