While digital technologies have undermined and shuttered so many neighbourhood theatres and bookstores, a concurrent embrace of more ancient operations like bakeries and butchers has allowed progressive companies like Two Rivers Specialty Meats to expand beyond the production and distribution of meat to include its cooking and consumption onsite. 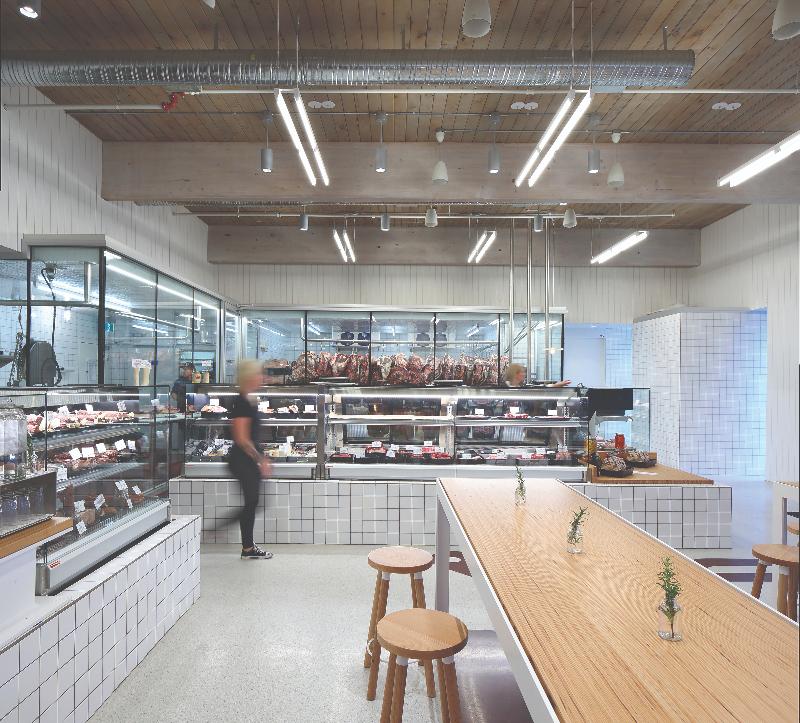 A dream of Margot and Jason Pleym, Two Rivers began in 2007 with an office, meat-cutting room and warehouse in a shared ground-level building in a light-industrial-zoned waterfront district of North Vancouver. As the business grew, so did consumer interest, with many asking if Two Rivers might one day “go retail.” In 2016, Two Rivers and interior designer Anna Walentowicz enlisted Campos Studio to help turn an adjacent space into a point-of-purchase outlet and “fast casual” dining room that would both meet its clients’ needs and reflect the company’s commitment to “quality meat products, respect for the animals and people we work with, and excellence every step of the way—from how we choose our partners to the cuts on your plate.”

For designer Javier Campos, inspiration came from the open-air markets at the southern tip of Mexico’s Baja California Sur, where he has been designing sleek, low-impact houses for the past dozen years. “I’ve always been attracted to the improvisational nature of these markets,”says Campos, “the variability of the shops and the intimacies they engender.” These “intimacies” include a culinary version of modernism’s truth-to-materials credo: a transparency that precedes the spectated assembly of a meal to include the public preparation of its constituent parts.

Two Rivers retractable full-length windows allow easy circulation between the shop’s interior and its patio. Those partial to front door entrances are met by the butcher counter, behind which are two glassed-in rooms: one for the drying of meats (south end), another for its butchering (east end). To the far left, along the north wall, is a canopied cooking area and dining counter; along the east wall to the butchering room, a bank of display cases. On the floor between the butcher counter and the cooking area are three long tables surrounded by stools. Linking the production and dining areas are designed fluorescent light fixtures suspended from the 20-ft. ceiling. Over the customer counter areas are lights designed by Tom Chung called the Spun Light.

Materially, Two Rivers is composed of six main elements: a terrazzo floor, square enamel tiles, stainless steel, glass, pine boards and birch-ply furniture, which Campos points out is “inspired by the exposed ceiling beams of the base building.” The distribution of these elements is complementary, balanced, with nothing out of scale, nor anything resembling a folly. The overall effect is a clean, “Dutch modern” environment punctuated by the colours of the meats and seasoned by a clientele that range from dusty tradespeople to well-heeled cosmopolitans. 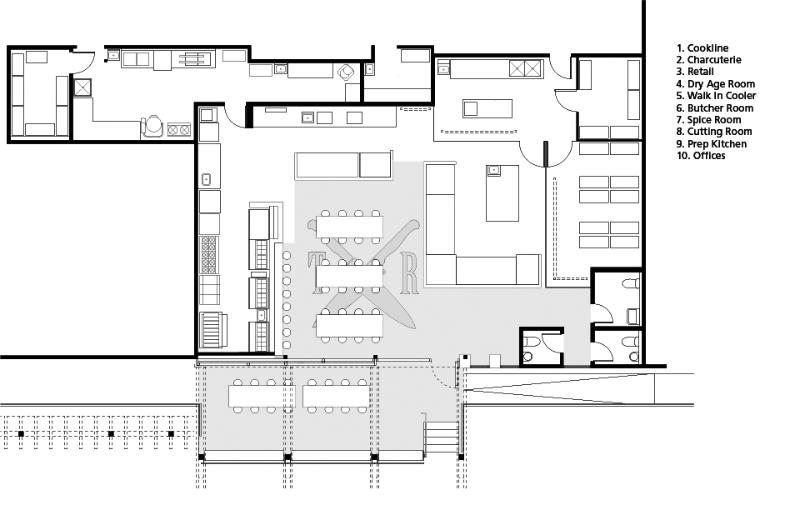 Like all thoughtful spaces, the Two Rivers outlet has attributes that only come to light after subsequent visits—one of which is light itself. When I ask how he achieved the sparkle along a vertical section of the tiled east wall, Campos too lights up. “You noticed!” he beams. “Well, it’s important that a butcher shop be sparkling clean, so for those highly visible sections, we placed the tiles at different angles. Anna said it almost drove the tilers loco, but I think you’ll agree that it hits the right note.”

Michael Turner’s latest book, 9×11 and other poems like Bird, Nine, x and Eleven, will be published this fall by New Star Press.