Established in 1890, University of Toronto’s architecture school—of which I am an alumnus—has migrated to several makeshift locations over the years before landing in a purpose-built building. It has finally found its permanent home as the new Daniels Faculty of Architecture, Landscape, and Design at the University of Toronto in a remarkable feat of form-making, site planning and city building.

The lead architects, Nader Tehrani and Katherine Faulkner of Boston-based NADAAA, apply the metaphor of “landscape” to the whole project describing it as an occupy-able ground plane of layered strata whose topography has been manipulated inside and out, seemingly enlarging the terrain. Working with local architects Adamson Associates, heritage architects ERA and landscape architects Public Work, they seized as an opportunity to reshape the edge of the campus – from hard border to interlacing blurred boundary, fluid and interpenetrating.

The circle known as One Spadina Crescent had been an idiosyncratic punctuation point and 19th-century touch of gentility in a patchwork of streets stitched together in a quasi-grid. Until now this circle has projected the unfulfilled promise of something special. In the postwar era, it was neglected and largely inaccessible, swallowed by streetcars and then car traffic. Now seen with fresh eyes as the emphasis shifts from auto-dominance to pedestrian life, its shift from introversion to extroversion is a civic invitation to the larger community.

It is fitting that the urban design catalyst for the western edge of the campus should be an architecture school. The reframing of the periphery revives the suppressed relationships of this campus corner on all sides of the circle: the prominent south-facing Spadina Avenue axis is celebrated with a raised Belvedere and event space. A generous promenade circumnavigates the building within the circle. Five enhanced crossings of the traffic “moat” and ample bike parking extend the welcome mat inviting the public into the circle. These convivial gestures speak to a new understanding of the university’s place in the city as committed steward and active contributor.

The formerly “blind” northern face of the building transforms from a back to a new front, re-engaging in dialogue with the city on all sides. From within the building, strategically placed openings offer 360 degree glimpses of the city outside, creating the pleasurable sensation of being in a ship moored off the edge of the campus. One enters that ship effortlessly through beckoning “portals” bringing the shared sense of the street indoors. Once inside much of the space is defined in plan and section by undulations in the floor, wall and ceiling that create subtly defined and fluidly interconnected places.

No opportunity to use space has been wasted. Defeating the traditional drive to maximize the net-to-gross floor area ratio, “unbounded” circulation spaces are also fitted out as the important spaces of learning and gathering. The lower level is exposed by the earth “heaving” down to true ground, exposing and making it habitable. As Faulkner and Tehrani tell it, the visible surface is like the tip of the iceberg, revealing only part of what is usable space below.

Tehrani explains that the architects, in close collaboration with Dean Richard Sommer, conceived of the building as kind of a “factory,” a foil for the work of the students themselves. This led to considerations of when to be generic, when figurative and when recessive. The result is respectful and strikingly new, restrained and yet dramatic.

The interior layout challenges traditional silos, focusing on the rituals of dialogue around the “crit,” wherein design students present their work for scrutiny and discussion in a semi-public forum visible to observers from many vantage points. Its large column free space covered by a cantilevered, canopy-like roof suggests a great range of ways to expand, contract and combine programs with a generous margin of flexibility appropriate to our time.  The invitation to discuss is enhanced and dignified by the building itself in a variety of welcoming “spaces of appearance” in the studios and meeting areas enriching the opportunity to participate, broadened programmatically by the diverse student programs, interdisciplinary collaboration and increased community outreach and public programming.

The addition’s unusual shape has a powerful logic. The circle’s very completeness, disconnection and inward focus had projected a level of remove and aloofness. Within it the neo-gothic Knox College building had a clear front and back, but its rectilinear symmetry did not address its 360-degree context. The new expansion engages with Knox College beyond its original footprint with a simple and brilliant move, by extending rear lateral “wings” to frame and complete an implied but never realized interior “courtyard.” 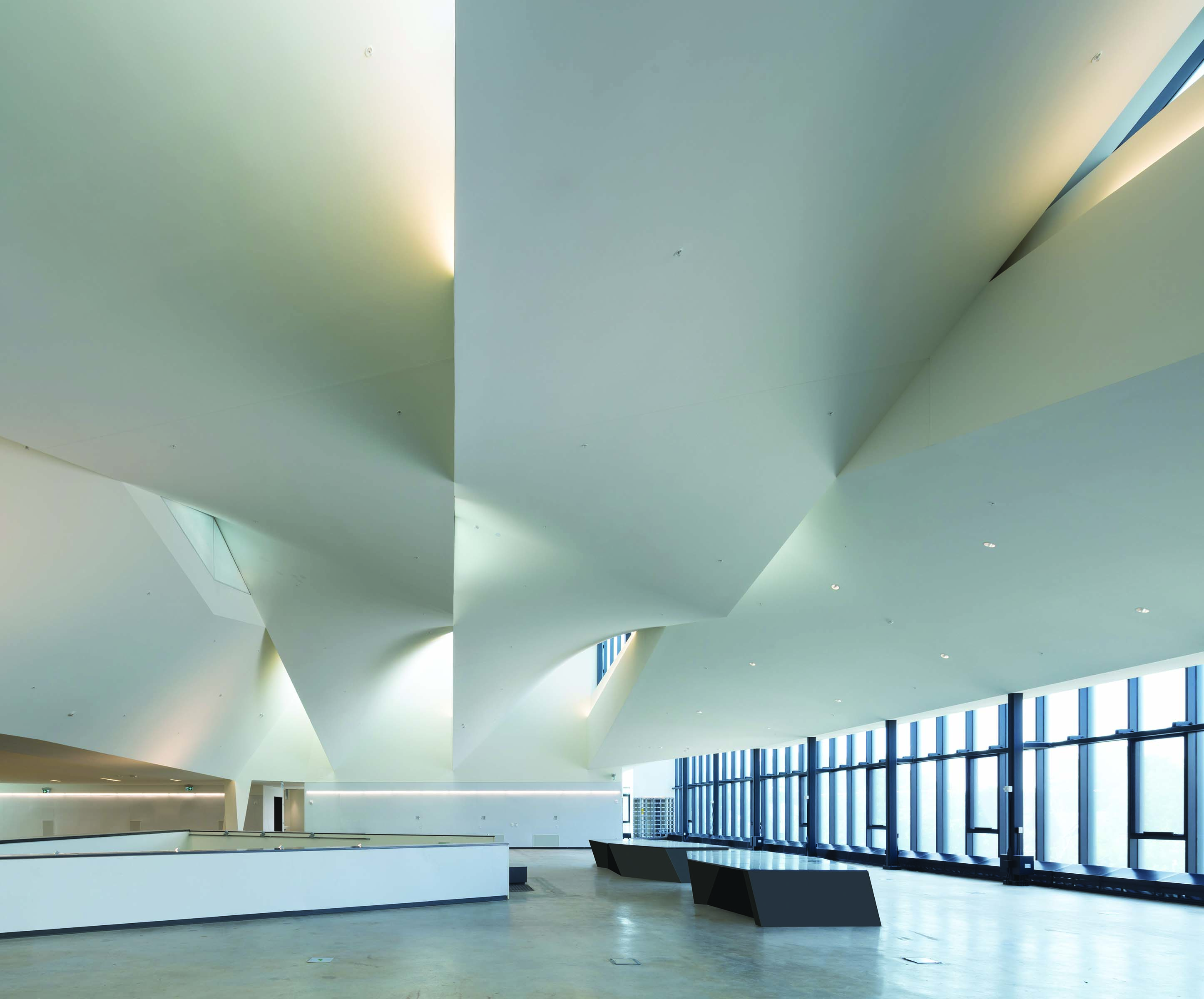 The architects ultimately embraced symmetry, while subtly inflecting the north-facing addition with the asymmetrical forces of context – the University campus on the east side and the residential neighbourhood on the west side. Mitigating the singular frontal orientation of the historic structure are the penetrations on the east-west axis of Russell Street described to me by Tehrani as a little like “entering the building through the ears, not the nose.” 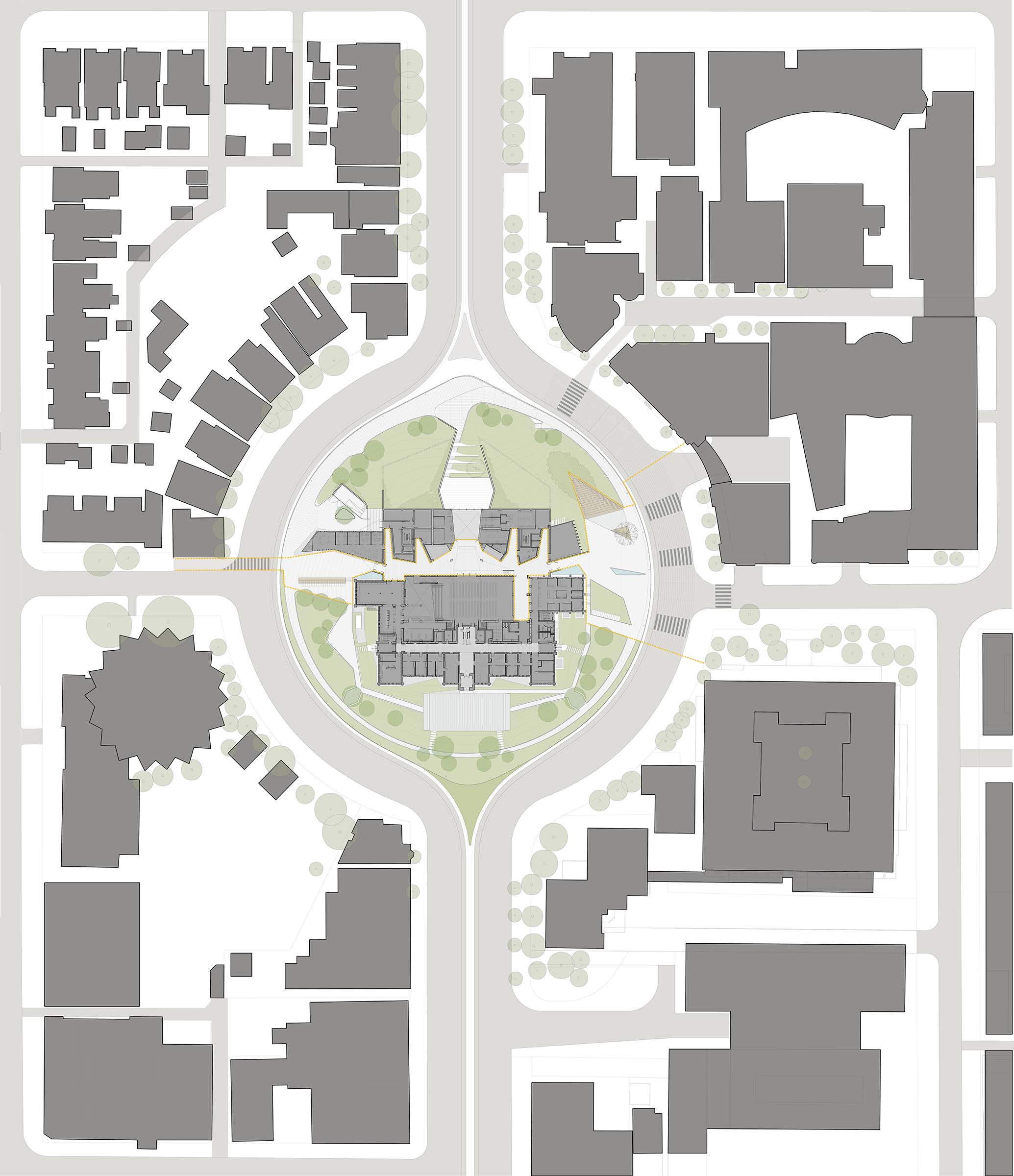 A looping circulation system frames this new collective space, above the Flex Hall, a large auditorium for school and University community. This is all accomplished within a simple box, economical and compact, superficially banal but in fact spatially intricate providing low ceilinged cave-like spaces of intimacy within larger organic cavern-like volumes that allow for overlook and a visual connection with the daily life pulse of the school. In combination, these design moves introduce a fine-grained permeability to the site, creating a city-like microcosm within a building.

The project carries on a rich architectural conversation across a century and a half. The old—orthogonal and heavily grounded, with cellular rooms of Gothic verticality— is in ardent dialogue the new: fluid, fractal, curvilinear, warped and interpenetrating. At the “joint,” the linking elements frame a shared collective passageway. In the new wing, abstracted echoes of the neo-gothic subtly tie the whole composition together while conveying a contrasting lightness, transparency and luminosity in the night view.

The building’s complex multi-layered roof is its pièce de resistance. Inspired by the Scottish trussed bridge Firth of Forth, says Tehrani, it is a highly performative “roofscape” combining daylight openings within the deep floor plate, water management and space-shaping structure. Its undulating warped form creates natural clerestories that shed tempered and variegated light on the studios and public spaces below.

What we see today is the first of a two-phase project to renovate and expand the iconic existing building and site for the current needs of the Daniels Faculty, while allowing for future expansion and inevitable changes of pedagogy. The ultimate measure of its success will be its ability to be interpretable over time. Its open plan and flexibility embody the lessons inherent in Stuart Brandt’s How Buildings Learn. Richly layered, highly articulated and spatially remarkable, the new Daniels Faculty projects a great balance between challenge, enticement and humility.