Transforming Space is an experimental installation drawing upon taxonomies found in organic living systems that are merged with the latest digital and synthetic scientific developments. This exploration emerged through an integrated collaboration with Amsterdam-based 4D SOUND and the Waterloo-based Living Architecture Systems Group (LAS) consisting of engineers, scientists, designers, and artists. The environment is an experiential, futuristic forest with hovering canopies, tangled thickets, and soaring clouds created from 3D fabricated forms that are assembled manually and embedded with artificial intelligence that can learn, adapt and even show curiosity as it evolves.

Aegis consists of an artificial forest and clouds designed with CAD software and created with 3D fabricated material. Thousands of parts form six component assemblies that contain tiny interlinked micro- processors organized in dense meshes. Suspended inside this intricate web are custom glasswork manifolds that are known as prototype cells (protocells) which contain a combination of oil, inorganic chemicals, and other solutions to form a chemical skin (opposite page, right).

Sphere-shaped skeletons emulating the hollow bone structures of birds and mammals are lined with bubbling prototype cells filled with self- renewing chemistry; these hovering, lightweight meshes create delicate canopies with floating, quivering, and pulsing mechanisms. The sculpture also contains Breathing Pores, which are identified by their feather- like frond attached to a long tongue (Sensor Scouts). When actuated, they curl up, with the force generated by a Shape Memory Alloy (SMA) wire as it heats up under the effect of electrical current (opposite page, left). They are also composed of glass vessels with an LED that lights up when IR motion sensors are triggered by human interaction. If an IR sensor is triggered from the surrounding environment, the local SMA reflect their behaviour causing adjacent SMA Breathing Pores to activate and curl up in the same ring along the canopy. 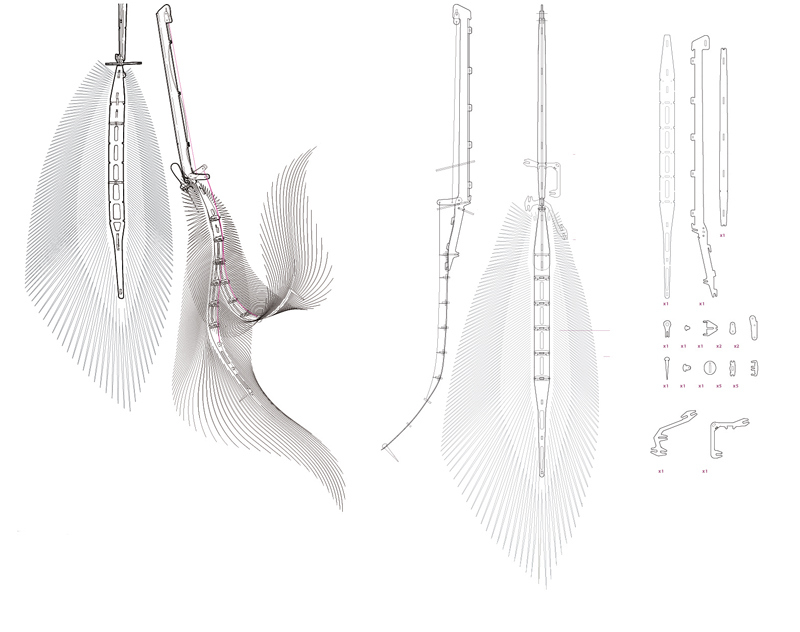 This exploration of the question of whether buildings could “know” us, “talk” to us, and even “care” about us allows us to suggest what next-century architecture—our future environment—might be like.