Toward a Canadian Culture of Architectural Competitions

Architectural competitions researcher Jean-Pierre Chupin recounts the history of the Block 2 competition and its potential to shape the future of Canadian competitions. 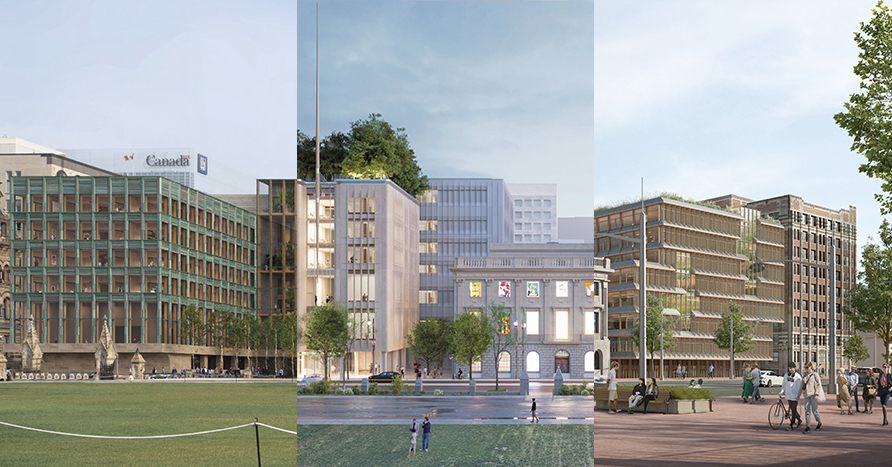 The Canadian Competitions Catalogue is proud to be the first to present full documentation from all the projects submitted by the 11 national and international teams selected to participate in the two phases of the “Block 2” competition in Ottawa in 2021 and 2022. The administrative term “Block 2” does not say anything about the democratic, cultural, historical, heritage and urban importance of this segment of Wellington Street, located in front of the Canadian Parliament. In the words of Honorary Jury Chair John Ralston Saul, the moral compass of this great competition, what was at stake was no more and no less than “the completion of Parliament Square,” which began a century and a half ago in the nation’s great inaugural architectural competition to design Canada’s Parliament.

To propose to rename this site “Parliament Square” would be an initiative that is all the more powerful and appropriate in terms of “Canadian-style” democracy, since the term “precinct” only affirms the frank, secure and—dare we say it—”police-like” limits of this public space, where the complexity of the Canadian Federation is expressed. Since I had the honour of being associated with this process in 2016, through meetings and presentations to the Public Services and Procurement Canada team in charge of Parliament Hill, I can testify that it was a question of pushing the limits and preserving democratic openness from the beginning to the end of this adventure.

In July 2016, in a special issue of Architecture Québec magazine, I had written an informed—and altogether, concerned— article on the Quebec competitions of the 2010s. This reflection had aroused the interest of Thierry Montpetit, the architect in charge of the thorny Block 2 file. This moody text was entitled: “There is no point in competing if the competition is not up to scratch.” In it, I complained about a way of doing things that had crept into Quebec and that increasingly limited the exercise to three competitors, to juries that were a little too expeditious, and to jury reports that were emptied of their didactic and informative role. Quebec had been for a long time a precursor in the field of public competitions, and there was reason to be alarmed by a trivialization (or worse) by an extreme simplification of the competition formula. Thierry Montpetit was then ambivalent about the relevance of a competition, but he wished to initiate a debate within the service in charge of restructuring the parliamentary hill. Armed with a clear definition—that a complex situation required a complex and proven democratic procedure such as a competition—it was not difficult for me to list the elements of the situation. It was early 2017, when heritage and urban issues were competing with tensions between local and national issues. The main concern was urban integration, but we didn’t want to dodge the magnitude of the architectural resolution of the site as a national symbol. We wanted to ensure the functionality of the parliamentary offices—since it is a large machine or, if we prefer, a parliamentary organization—but we also wanted to reassure citizens about the proper use of public funds. All the elements of a great competition seemed already in place.

In order to better inform the government experts about the subtleties of the competition, I had put together a series of historical, theoretical and comparative slide presentations. The civil servants and their guests were amused by these academic presentations, which were as long as they were far from the “executive summaries” in the form of “bullet points” that pretend to summarize everything in five points. I spoke as much about the Duomo of Florence as about the beautiful series of library competitions in Quebec, for which the audience, although not very inclined to emotion, was very admiring. My mission was to deconstruct the supposed virtues of calls for tender to reveal those of competitions. But the shadow of the sadly failed Bank Street Competition, at the beginning of the 2000s, on a site adjacent to Parliament Hill, with similar but lesser stakes, regularly came back on the table as a counter-example obscuring all the discussions of the representatives of public procurement in Canada. It was necessary to deconstruct this apparent failure to discover that it hid more dubious political decisions than problems with the functioning of the jury.

The stakes of the “Block 2” site seemed complex enough to compare with historical and legendary competitions, but one last argument was missing. In retrospect, it is not certain that me and my team would have succeeded in convincing people of the need for the competition, so much resistance was displayed around the coffee machine at these information meetings. The argument would come from higher up on June 21, 2017, when Prime Minister Trudeau announced that the former U.S. Embassy—right in the middle of Block 2—would become a space under the governance of Indigenous Peoples. The paradoxical reversal of this symbol of U.S. imperialism, a political move to be sure, made this house of Indigenous Peoples, or “Indigenous Peoples Space,” an injunction whose added complexity now left no room for the usual public procurement practices. After this highly political and democratic decision, the formula of the competition imposed itself with force. From a hypothetical modern competition with typical stakes, we moved, within a few hours, to a true hypermodern competition placed under the aegis of equity, diversity, inclusion and reconciliation. The so-called “Block 2” competition was born. Five years later, we can appreciate the results and especially understand what made some of the best architectural teams in the world sweat when faced with the magnitude of this complex situation. The reader can judge this by comparing the proposals.

The space of this editorial is too limited to explain and recount these five years of competition development, nor all the lessons that accompanied its implementation, including the introduction of the German team of Phase Eins—undoubtedly the best competition organization agency in the world—as well as the role of the Royal Architectural Institute of Canada in the regulation of the procedure, with the attentive, but benevolent eyes of Peter Ortved and Jonathan Bisson. It will be necessary one day to explain in detail all that the team, piloted by Assistant Deputy Minister Rob Wright with the support of Thierry Montpetit, produced in terms of expert reports, preliminary analysis, preparatory meetings, etc. Everything, absolutely everything that constitutes an excellent competition was mobilized in the service of quality. For the sake of confidentiality, we will unfortunately not be able to recount the hours and days of deliberations of an immense jury coordinated with the greatest respect for the diversity of points of view by the architects Bruce Haden and Anne McIIroy, acting as Jury Chairs. However, as a researcher familiar with national and international competitions, I would like to express my admiration for the impeccable organization of this great historic competition.

Yet, at the same time, we can only regret that the Ordre des Architectes du Québec has decided to abolish the competition committee and the competition accreditation procedure in December 2021, at a time when Quebec’s expertise was being admired by Ottawa’s elected officials. The validation procedure for Quebec competitions, which was put in place in the mid-1990s has long protected clients, competitors and professional advisors alike. To think that everything is fine now as far as the organization of competitions is concerned, to renounce to check their organization, while undermining the role of competitions in the amplitude of public procurement, is first of all, to dangerously underestimate the fragility of a complex procedure. Competitions are never cast in the concrete of an infallible methodology. Each competition is unique, because each situation is unique. We have yet to understand how abolishing the OAQ competition committee will affect a three-decades-long competition culture, but the fact remains that a significant part of Quebec’s expertise will have actively contributed to the success of the “Block2” competition.

I hope that the expertise developed for this competition will serve as an encouragement and that we will witness in the coming years the emergence of a new competition culture in Canada. Competitions are certainly not the only roadmaps to quality, as they will also benefit from all those initiatives and policies currently in the making that aim to ensure the highest expectations for public buildings and environments in Canada. These 11 projects for Block 2, that a small team of four students from the Université de Montréal has just assembled on the pages of the Canadian Competitions Catalogue, already offer themselves as a great lesson in contemporary architecture. You may now be the judge!

Jean-Pierre Chupin is the Canada Research Chair in Architecture, Competitions and Mediations of Excellence.