Every year in downtown Toronto an innovative food drive concept called Canstruction turns donated canned goods into memorable and imaginative artistic structures. The whimsical installations are part of a larger international fundraiser that currently features teams competing in 200 cities and tens of millions of pounds of donated food.

This year, Canstruction is celebrating the 20th anniversary of the event in Toronto by highlighting the design skills of local architectural and engineering firms. The teams will collect food and staples to create pieces of art, while engineering for a great cause. The structures that were built last year donated over 52,000 pounds of shelf-stable food to Daily Bread — which was distributed to member agencies and fed approximately 120,000 people.

Since every build is its own mini-design project that requires project management, design, storytelling, fundraising and administrative skills, Canstruction is a unique experience for teams Teams are encouraged to use cans from a list of high-priority items needed by Daily Bread keeping in mind that junk food is prohibited.

As Toronto prepares to welcome 25 teams to build projects at their 2019 event, the volunteer board reflects on their favourite structures from previous competitions below: 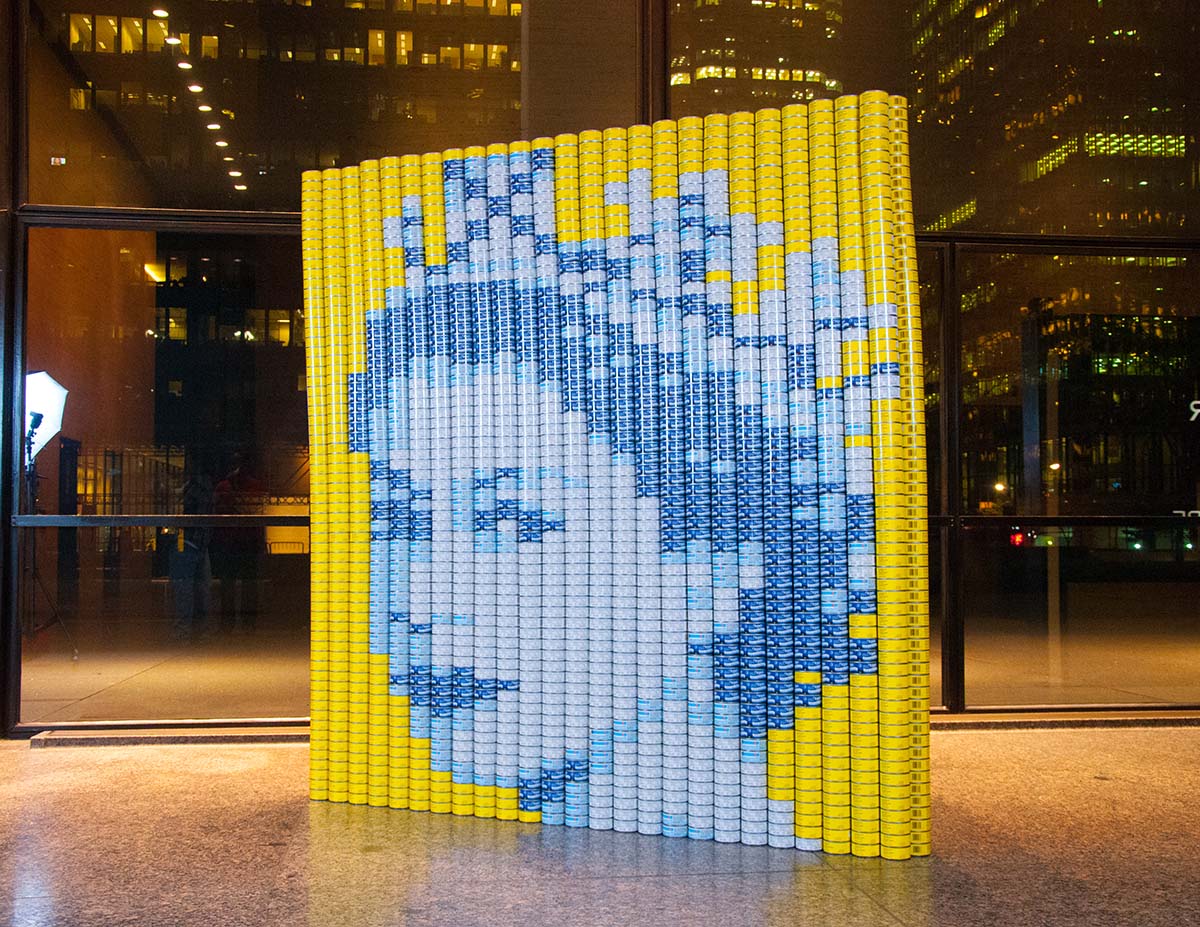 A Queen’s Feast, 2014
Goldenberg is responsible for bringing Canstruction to Toronto, so he has seen all the projects since 1999. He selected a BA Consulting build from 2014 as his favorite. A Queen’s Feast may look simple – the standard head shot of the Queen found on many coins or postage stamps – but it was an intricate design that featured three different people on each side of the build. Reproducing a photo was a concept used before, but not at this scale. The build team was able to create an impressive 3D effect using the can labels by integrating shadows to make it pop. The effort was rewarded with the Best Use of Labels Award. The Queen’s Feast also garnered the International Best Use of Labels award – a first for a Toronto-based project. 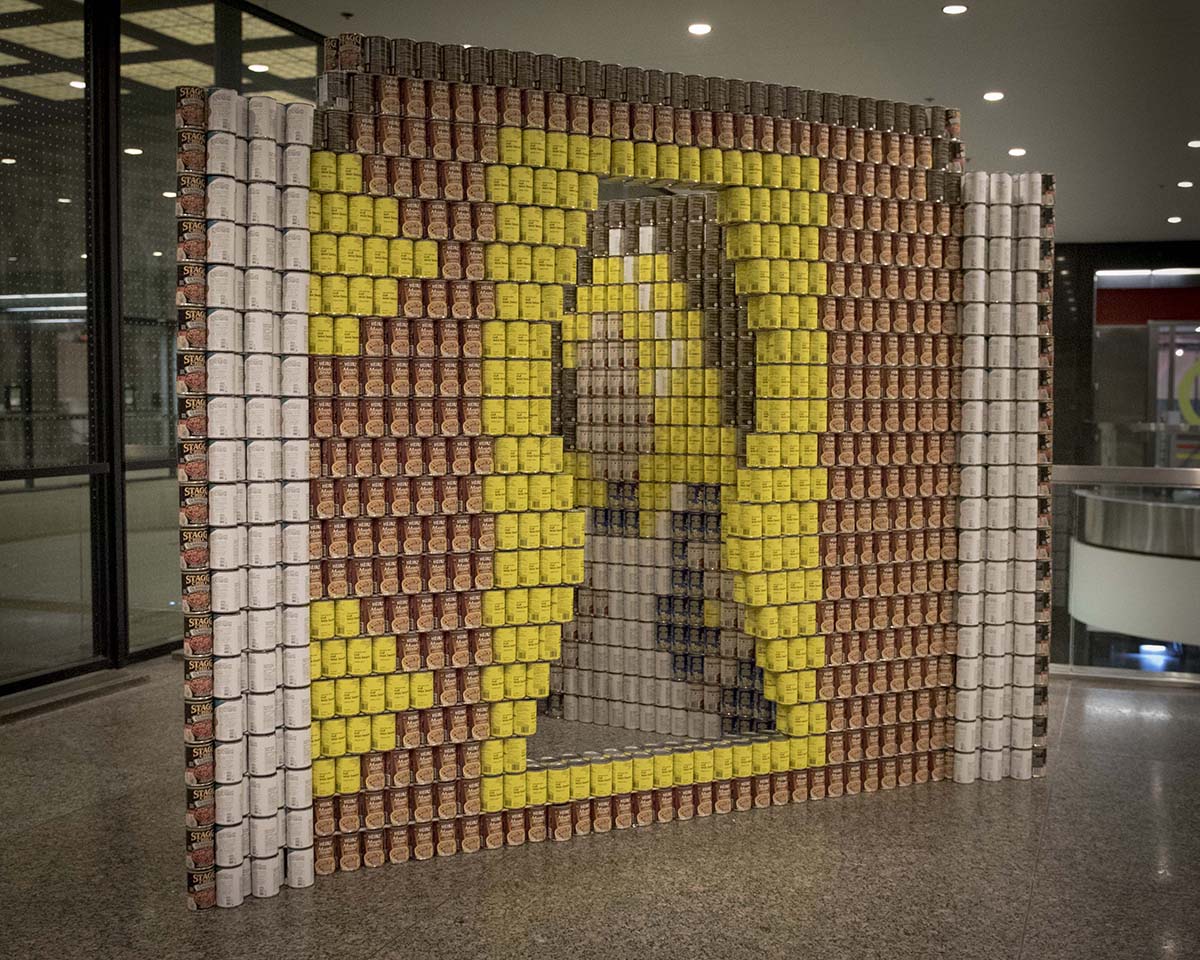 Can you see through the looking glass?, 2017
Confessing that the influence of her favourite movie played a part in this pick, Kewzer selected the Alice in Wonderland-inspired build by Turner Fleischer Architects that incorporated some familiar elements of the story – with a twist. The structure provide a key hole for viewers to see beyond the looking glass to reveal a secret. Kewzer liked the structure’s playful story with interior and exterior elements to add to the mystery. 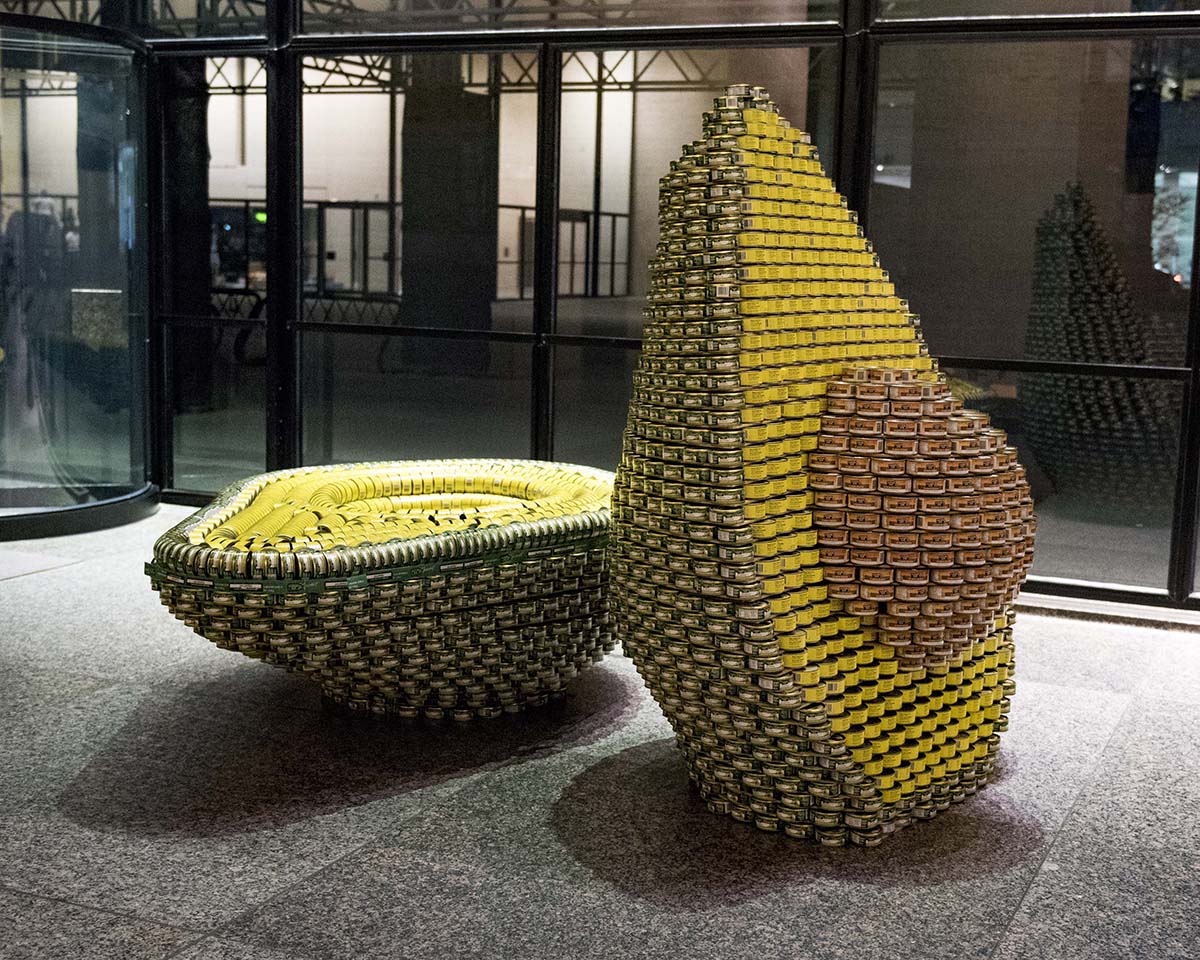 AvoCANdo, 2017
This may seem like a simple concept but the team at Entuitive and PCL Contractors created an impressive structure. The message of full stomachs stand tall was highlighted by an avocado pit that seemed to defy gravity. Chapman was impressed with not only the design and structure but also the use of high-quality products that are in the most need by Daily Bread. 2017 turned out to be a very competitive year, so the build did not garner an award but was very memorable. 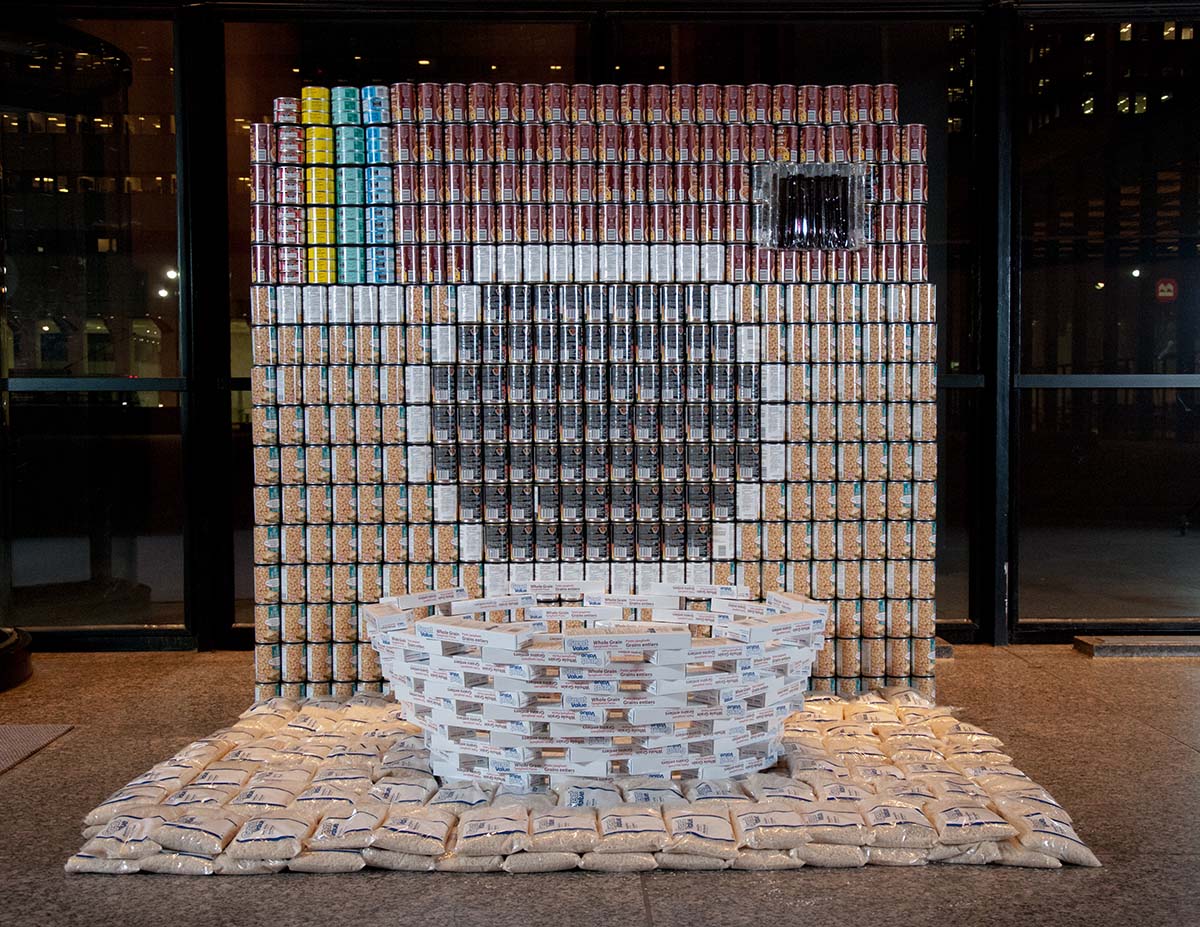 Capturing Hunger, 2014
Part of the Canstruction planning process is to create the story behind the structure. While many are whimsical, the event supports the serious issue of hunger. For Kanani, this is what is memorable about the Capturing Hunger build by Quadrangle Architects in 2014. Based on the Instagram logo, the story behind the structure was powerful. The message: food may be a popular social media post but there are very few images of hunger. 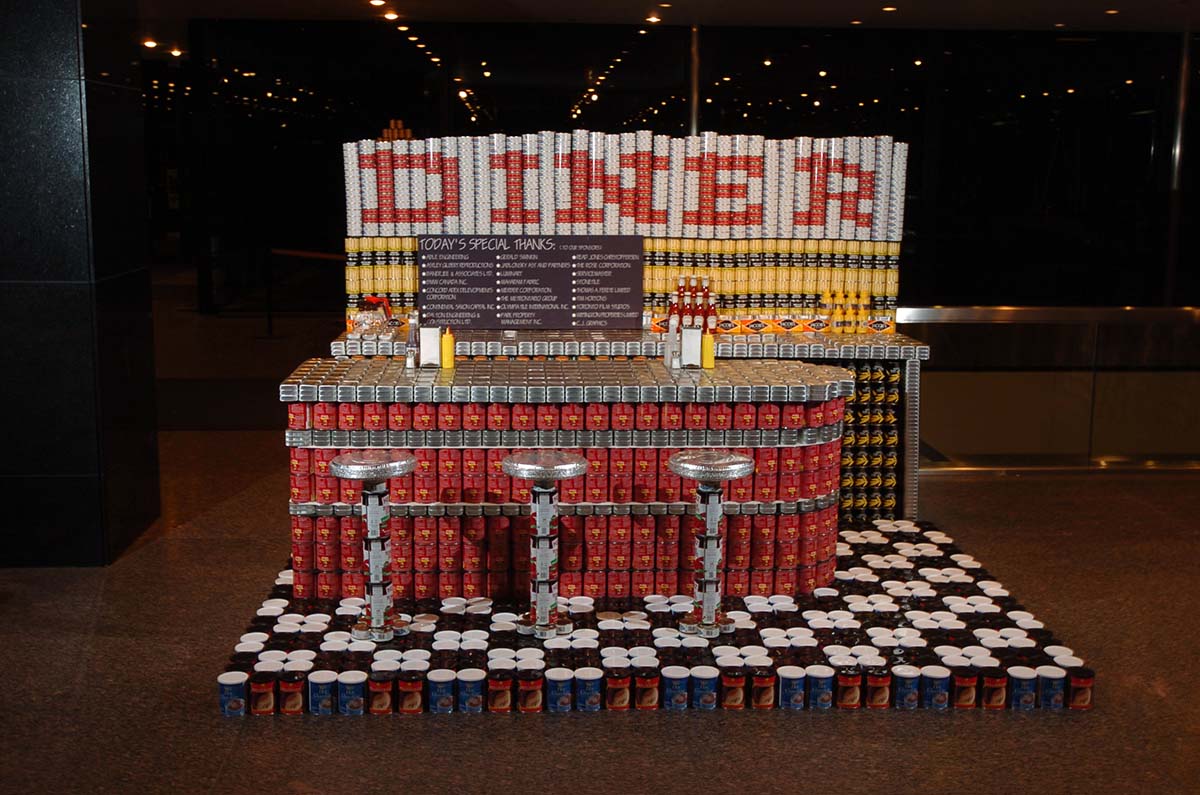 Order #6: Hold the Hunger, 2004
This creation by Quadrangle Architects, inspired by an old-school diner, combined an interesting use of colour and a great sense of humour. More than 15 years later, Geoghegan remembers the interesting use of additional items such as pie plates for the stools as well as the food staples. While the diner was whimsical, it also underscored the message of helping the hungry. The build was rewarded with the Jurors’ Favourite Award. 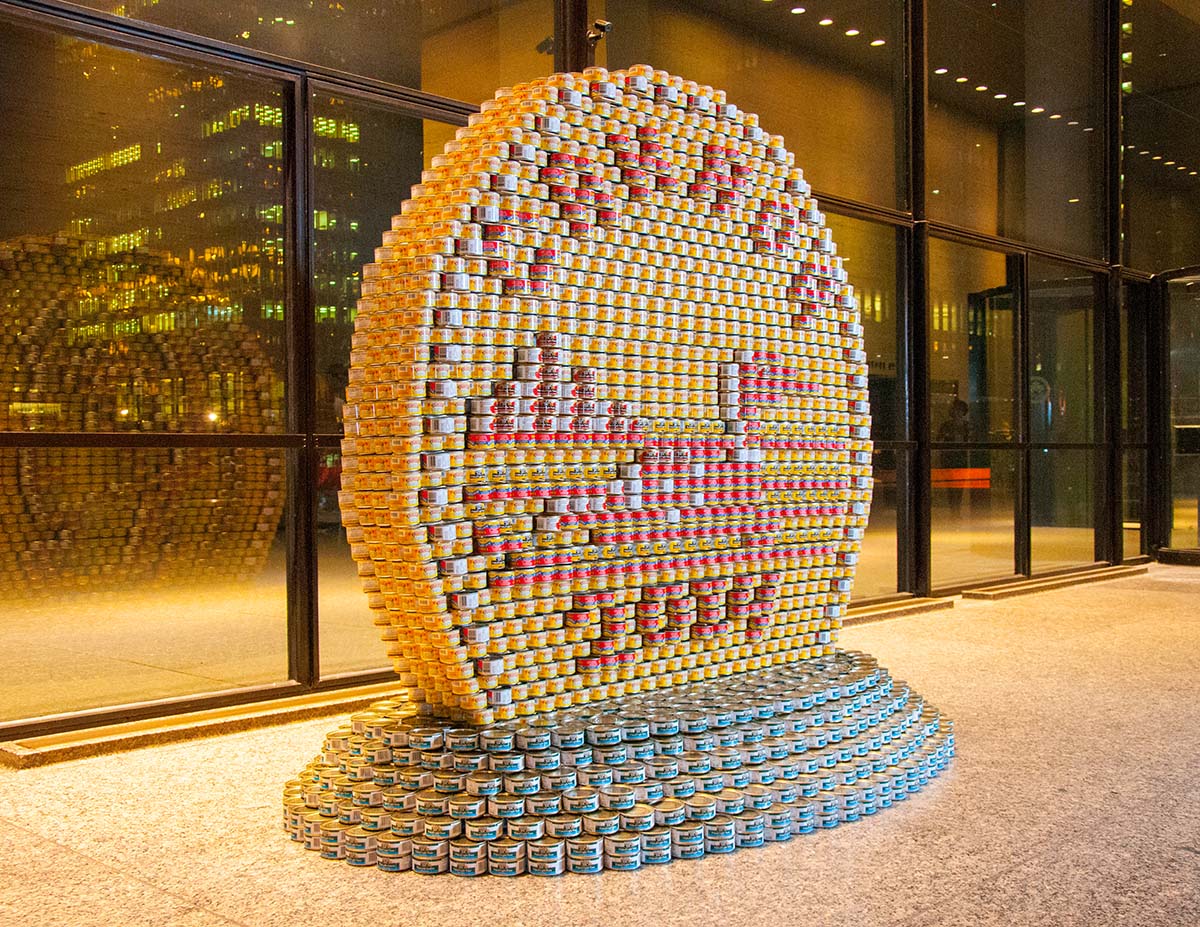 This Loon Sure CAN Fish!, 2014
Titus’ selection may be influenced by personal experience, since it was built by his firm Aercoustics Engineering and Rebanks Pepper Littlewood Architects. The idea of standing the coin on its end meant its structure had to be more creative. The build did capture both the Structural Ingenuity and People’s Choice award in 2014, so he is not the only one who found the 3D design memorable. Built with cans of high-value tuna, the loonie did need some rebuilding before judging began but stayed upright during the competition hours. 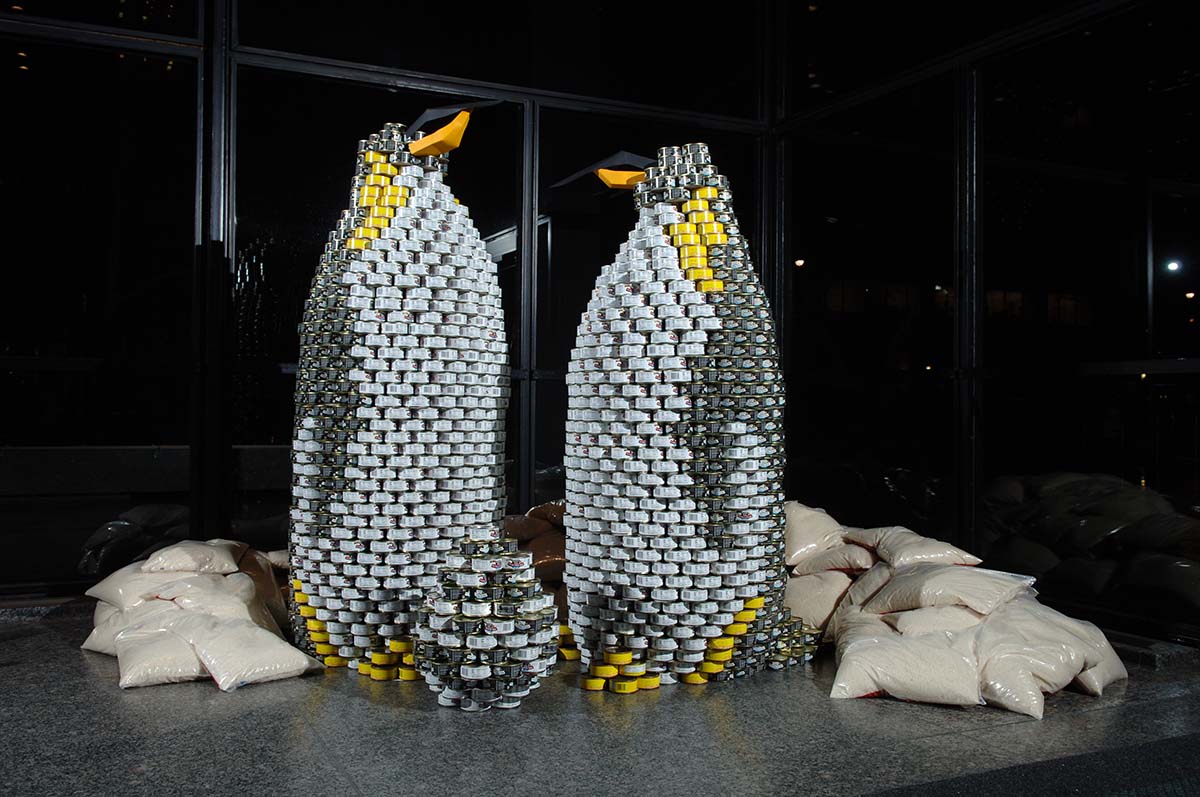 The Search for Food, 2005
These penguin parents were more than six feet tall and comprised entirely of cans of tuna to deliver the message of hunger. Designed and built by Diamond Schmidt Architects, the new parents and their baby were rewarded with the Juror’s Favourite Award. 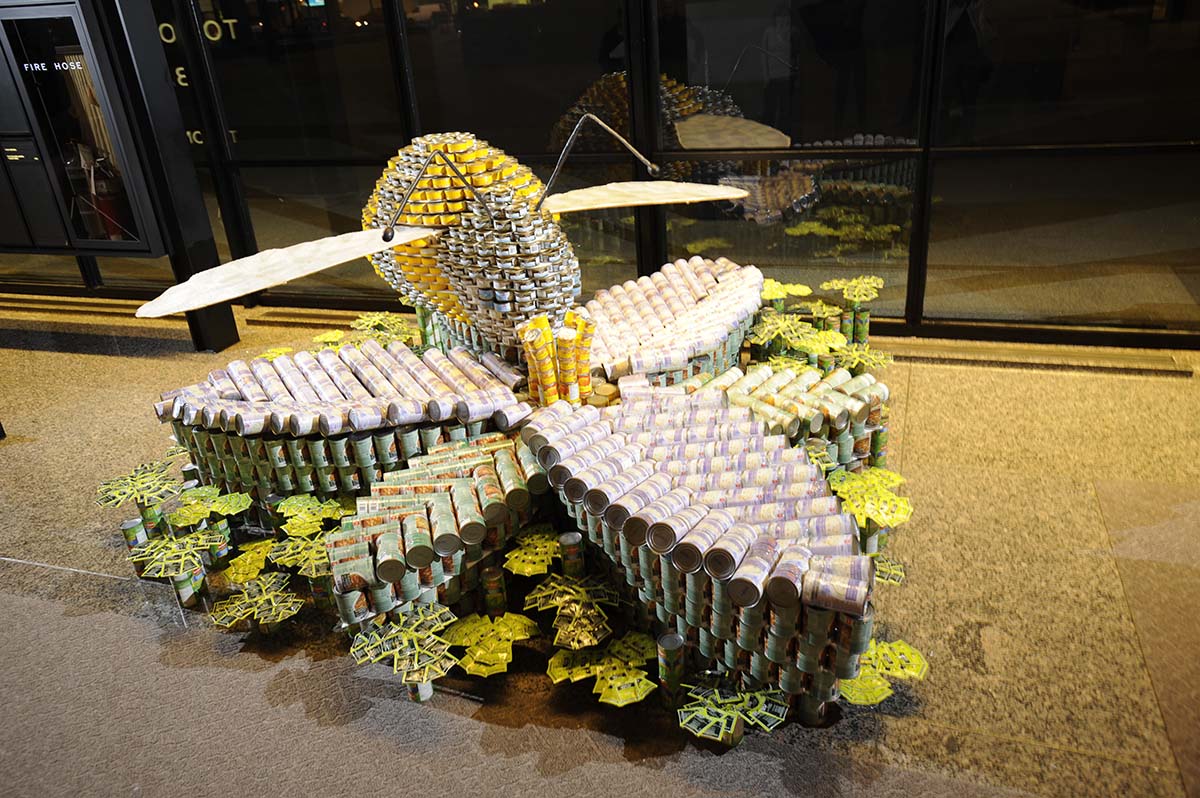 Yes Bee Can, 2008
As a former competitor, Facey picked this structure because she knows what was involved in putting it together. And it is what she always appreciates about the competition – a simple idea executed well. Designed and built by Hallsall with KPMB Architects, the bee not only featured cans of food and tea bag flowers but moving wings. The structure was rewarded with the Jurors’ Favourite Award. 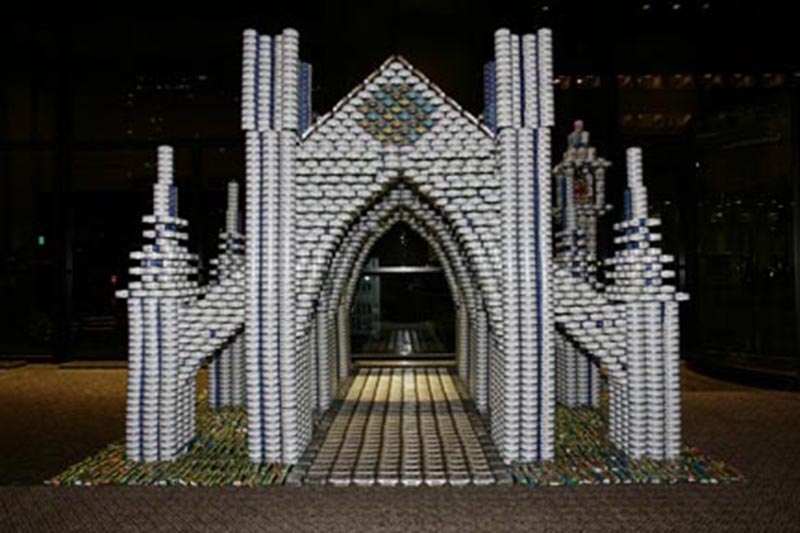 CANthedral, 2006
Built by BA Consulting Group, Kabriel chose CANthedral, which re-created a traditional cathedral complete with arches, walkways and spires. The result was a 3D creation that, even more than 10 years later, she describes as “absolutely beautiful.” Built with mostly tuna cans, the CANthedral was not just breathtaking to look it, but the arches and walkway were also structurally beautiful. The build team was rewarded with the Structural Ingenuity award for their efforts.