“Only in Manitoba do we have to build hills,” says Peter Sampson,  co-principal with Liz Wreford of Public City Architecture. Although Saskatchewanites might commiserate, it’s true that the flat topography of Manitoba in general, and Winnipeg in particular, limits sledding  to river banks and artificial structures. As a result, one regional typology that has thrived here is the toboggan run. These spaces between artifice and nature also bridge the rural and the urban. 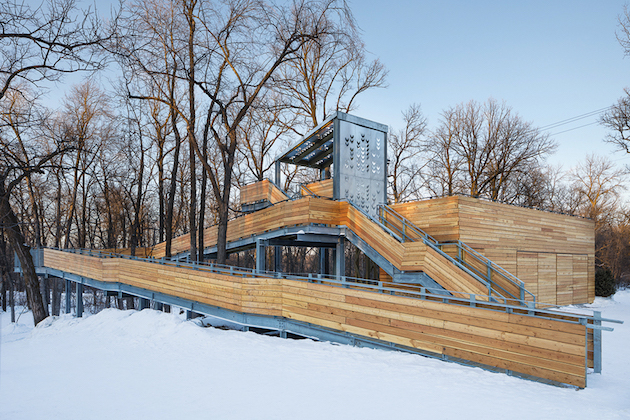 Resolving that condition here entailed a further challenge: at the urging of its Universal Design Coordinator Judy Redmond, the City of Winnipeg decided to make this their first universally accessible toboggan ramp, at St. Vital Park in the south end of the city. The Public City team seized the opportunity to develop a design that speaks, appropriately, of movement. The ramp shoots out over an existing gentle hillside. Halfway up, among the treetops, wood decking gives way to a galvanized steel grille, emphasizing the leap through space. Beneath, a dizzying array of stilts touch the ground; the space between accommodates the informal sledding that predates the formal program of two toboggan chutes. 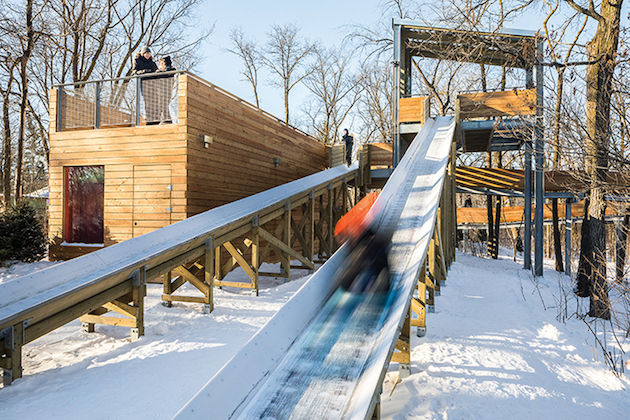 As inclusive-design consultant Marnie Courage observes, “the ramped structure allows access to the first slide allowing kids with  toboggans, families with strollers and people with mobility devices  to access the slide the same way.” Though she adds that either  a second ramp or doubling the width of the existing ramp would  increase the accessibility, she lauds the Public City toboggan hill  as truly an inclusive design. Indeed, one wonders why toboggan runs have not always been built this way. 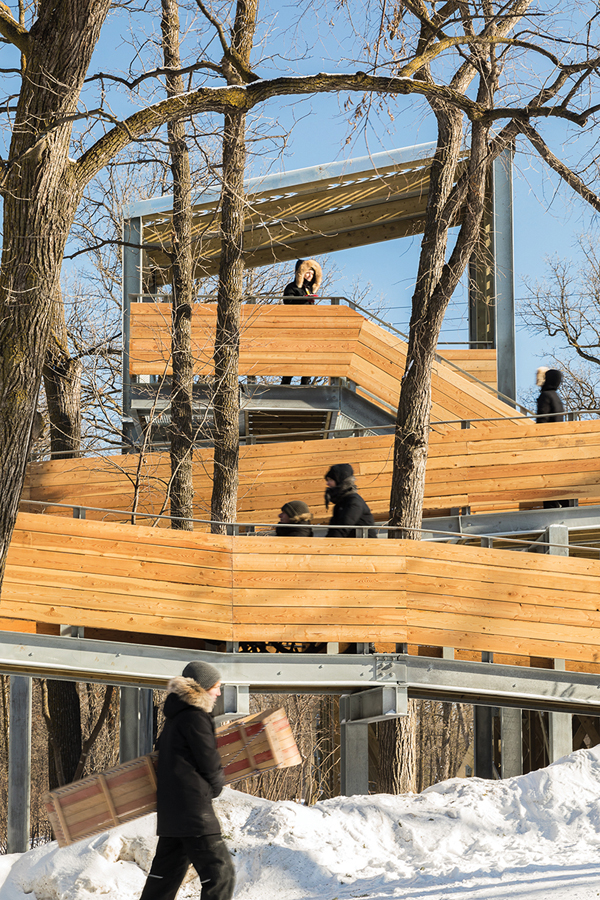 Parks Capital Projects Manager Jason Bell explains that this project is one of several upgrading the park’s Centennial-era infrastructure  to contemporary standards. The long-term plan is to provide accessible washrooms and parking close to the ramp, which would make it more completely accessible. According to Brian Everton, a designer on the NRC’s Task Group on Accessibility for the Canadian Commission on Building and Fire Codes, Manitoba’s progressive amendments to the NBC “raised the bar” for accessibility regulation in this country, and this project offers one good option for accommodating ranges of mobility in the built environment.

The structure serves that range of mobilities, while relaying both  a contemporary language and a hint of nostalgic warmth. A galvanized steel cowl at the top of the run is perforated by a herring-bone pattern evoking in equal parts a dappled tree canopy, knit patterns from the 1950s, and a quasi-digital code. The interplay between this steel vertical and the horizontal fir-clad volume beneath helps the structure work  as both a shelter and a landmark. And its hot-pink interior extends the palette of vivid colours Wreford famously used in her Hygge House Warming Hut on the nearby Assiniboine River. 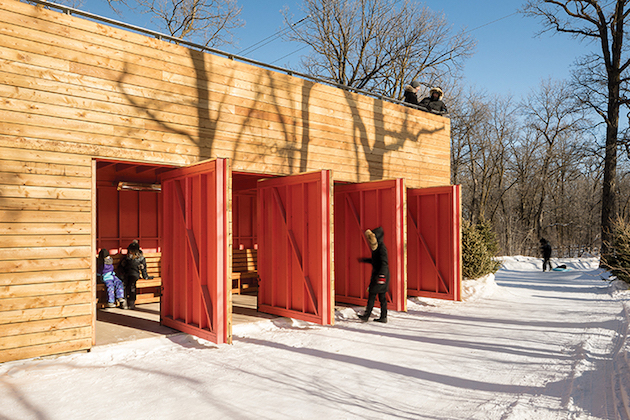 This fits squarely in Public City’s big-picture ambition/vision/ intention/aspiration: to create not just architecture or landscape, but a fusion [OR symbiosis] of the two. Or in Sampson’s words: “not to design spaces, but seasons.” City life means living in public throughout the year, and some of the most successful urban centres, such as Copenhagen, impress us precisely because they activate spaces in the cold. Winnipeg has no shortage of projects and programmes in this regard—RAW:Almond (Canadian Architect, February 2018) and the Warming Huts stand out as examples. To these we can now add this valuable step towards making public spaces—even the most chilly and challenging—truly inclusive.