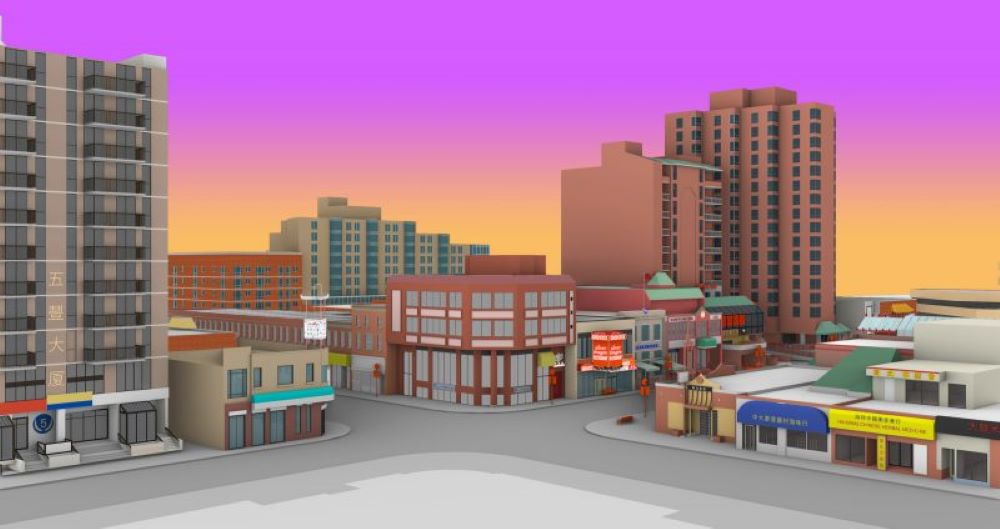 The map visualizes the changes that the buildings in Chinatown have experienced, alongside community stories and oral histories that have occurred around them. The project was created as part of the Calgary Chinatown Artist Residency with The City of Calgary and The New Gallery.

Cheryl Wing-Zi Wong  is a New York-based artist and trained architect working at the boundary of art, architecture and social practice. Her work investigates the transformation of shared space over time, and seeks to challenge social and political boundaries through sculpture, installation, performance and site-specific architectural interventions.

“As an artist and a trained architect, my creative practice explores how we share space together and how spaces can change over time. I’ve had a longstanding connection to Chinatowns in the U.S. and have seen each one transform over the decades.  In New York City, I live in Manhattan’s Chinatown. Growing up in Los Angeles, my parents brought my sister and I on monthly pilgrimages to LA’s Chinatown,” says the artist.

Cheryl Wing-Zi Wong says that the first part of her research was just to observe the buildings of the neighborhood by walking and moving around each structure, studying its details, and photographing it from different perspectives: “I was often invited inside and able to interview the building steward or owner. In some cases, I spoke to community members who had grown up in buildings, now demolished, in the mid-1900s. Drawing from this research conducted onsite in Calgary, my process involved recreating 3D digital models of each [known and more notable] building’s exterior transformations, connecting these iterations to tell a story about how the architecture has changed over time. Identifying these building transformations has involved piecing together clues from archival floor plans, photographs, oral histories, as well as the city’s 1911 and 1961 fire insurance maps.”

According to Cheryl’s research, Calgary’s Chinatown has been forced to relocate several times; the current site is its third location. “From around 1888 to the early 1900s, the first Chinatown in Calgary was established by several Chinese laundry workers on 8th and 9th Avenue SE and Atlantic Avenue.

After the smallpox breakout in 1892, a second Chinatown formed around the Chinese Mission on 10th Avenue SW in the early 1900s, but was forced again to move out after the Canadian Northern Railway announced plans to expand into the area in 1910. With the  intention to create a new Chinatown once again, several Chinese merchants purchased what is today the Canton Block, at 2nd Avenue SE and Centre Street.

“Like the other Chinatowns across North America, Calgary Chinatown is an ethnic enclave founded upon a history of exclusion. These communities have persisted, grown, and flourished into vibrant hubs, but today, these Chinatowns continue to be threatened by gentrification, major infrastructure and high-density development. The effects of the pandemic and racist, anti-Asian rhetoric continue to cast a long shadow on our Chinatown communities. Yet, in the face of these challenges, Chinatowns across North America remain resilient.”