The second annual #TimberFever Design-Build Challenge put architectural science and civil engineering students from Ryerson University to the test. Students were tasked with designing and building an Urban Refuge out of wood – a private space where at least one person can sit or stand in to disconnect from the rush of urban life, and reconnect with nature.

The students were placed into eight teams, all named after local species of trees – Butternut, Dogwood, Blue-Beech, Sugar Maple, Sycamore, Trembling Ash, Sassafras and Ironwood. The design brief was revealed on the evening of Thursday, September 22, and the teams had until Sunday at noon to complete their structures.

Each team was provided with lumber, plywood, a wood base, screws, nails and metal brackets. And this year, two new elements: fabric and one StopGap.ca access ramp.

“In the beginning it was challenging, there are so many perspectives to take into account—math, aesthetics—but we very quickly found common ground. We started talking like each other, it was good,” said a third year civil engineering student.

Judging was based on concept, design development, construction and the presentation of the completed urban refuge. Judges (including Canadian Architect editor Elsa Lam, architect Tye Farrow, and Treehugger editor Lloyd Alter) considered form, sculpture, drama, colour and beauty. All projects passed a structural stress test by resisting vertical loads and lateral forces. The weights were scaled down from real life to the scale of the models: 135 lbs of steel plates were placed on the roof, and there was 45 lbs of horizontal pushover.

The winning teams are listed below. All three winning pavilions will be on display at IIDEX from November 30 to December 1, thanks to the support of Carpenters Union Local 27. 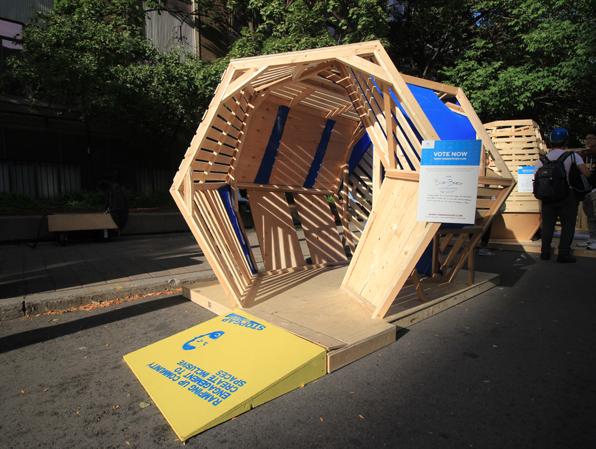 Judges’ comments: “Nest” was selected for its use of volumes, founded on a strong structural basis and rules. As one enters the refuge, there is a procession into space and intrigue as the structure reveals itself. The use of alternating large planes of colour fabric and plywood frame the view. The structure is sound. 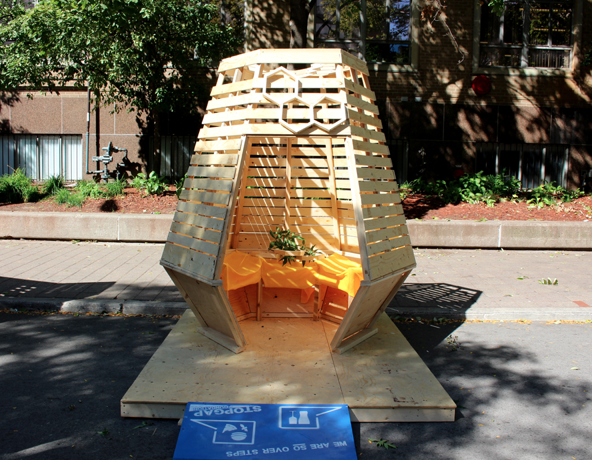 Judges’ comments: “Hive” is beautifully executed, pure and creates a very social, comfortable space. The golden honey seats work well inside a scheme that uses the honeycomb structure in large and small scale elements throughout. 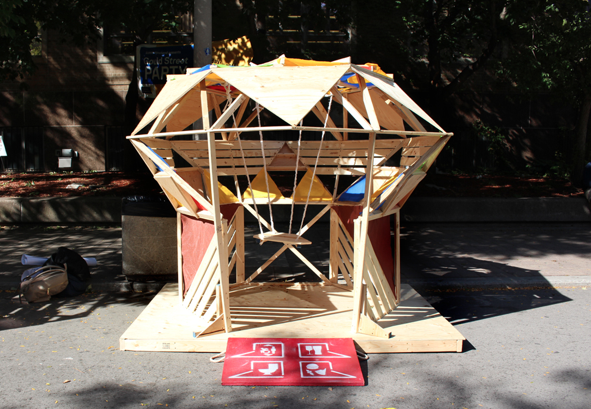 Judges’ comments: “Tree-magination” brings back memories of Expo 67 in Montreal. The repetitive triangular pattern is emphasized by the bright fabric. The highlight: a swing built by the students using the materials at hand – wood and hand-woven fabric. To the judges’ amazement, this project attracted a little girl to run in during judging. Undeterred by the crowd she started to swing away, proving that the students had created a compelling Urban Refuge. 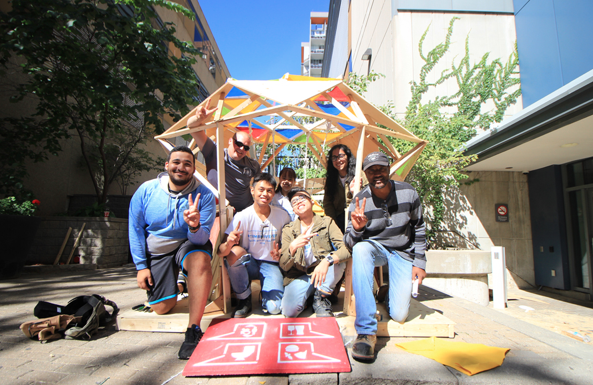 The People’s Choice Award is based on public voting. The structures were on display on Gould Street for one week, prompting users to vote online. With over 1,500 voters this year, the winner was Team Dogwood for “Tree-magination.”