The Pritzker winners were selected to design a new rose garden in Montreal, but the project was cancelled after a change in provincial government.

In 2014, three competitions organized in parallel by the Montreal Botanical Garden museum and the institution Space for Life resulted in the selection of three winning projects. The winner’s announcement coincided with Montreal’s 375th anniversary celebrations.

The implementation of two of them began four years later—the Biodome was closed for renovations in 2018, and the Insectarium closed for its revamp in 2019. The Biodome reopened to visitors in 2020, and the insectarium is scheduled to be completed in June 2021.

The third project aimed to reinvent the Roseraie, or rose garden, set in the Glass Pavilion of the Botanical Garden. The project has already been forgotten by most, including by the media. Now we might regret that it never went forward: as it was designed by Lacaton and Vassal,  winners of the 2021 Pritzker Prize.

These three competitions are all aimed at renewing the largest museum complex in the natural sciences in Canada. By launching a series of international competitions, the organizers aimed to reinforce Montreal’s place in a vast planetary movement in favor of biodiversity. 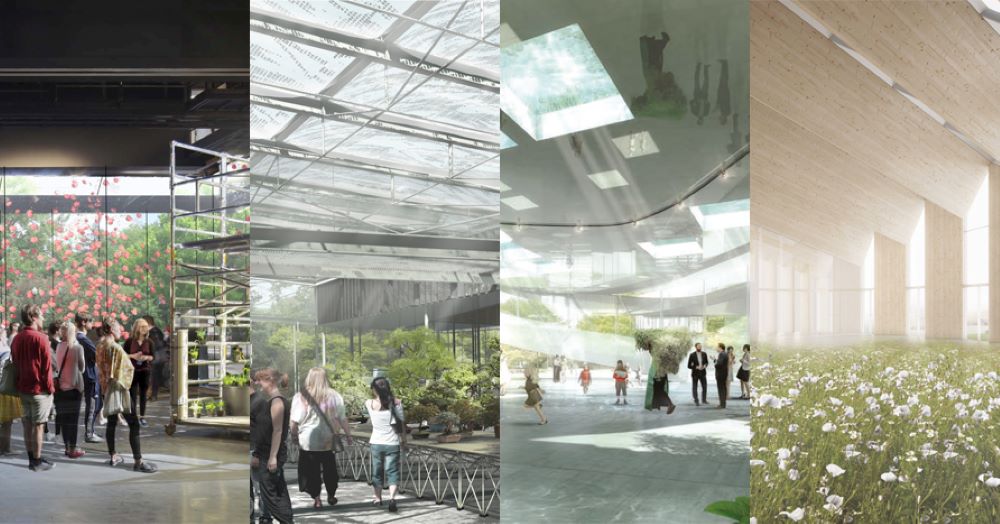 Specifically, the goal was to update or redesign three museums: the metamorphosis of the Insectarium, the renewal of the Biodôme and the construction of a new glass pavilion at the Botanical Garden. The two-stage competitions called for the creation of living, evolving, permeable and ecological spaces while promoting an immersive experience for visitors. Some thirty teams composed of architects, museologists and immersive space designers from nine different countries submitted their projects to a jury chaired by French architect Édouard François.

The criteria were not lacking in ambition. They included the mandate to:

In a word, Space for Life invited the design of projects with a strong identity, capable not only of attracting visitors, but also of increasing their number.

In the competition for the Insectarium, the winning proposal was authored by the multidisciplinary team composed of the German firm Kuehn Malvezzi, the Quebec architectural firms Pelletier de Fontenay and Jodoin Lamarre Pratte, in association with the engineering firms Dupras Ledoux and NCK. The jury admired its mastery of the sensibility and the museum experience, for which it used the analogy of “metamorphosis”. Seeking an innovative response to “the notion of the genetic code of the program and of the Insectarium”, the consortium transformed the “biophilic” center into a scenographic circuit, and arranged the creation of experiential spaces where the insect is king.

The winning team distinguished itself from the three other finalists (Lacaton & Vassal, Druot, FABG and SNC-Lavalin; Atelier Ville Architecture Paysage, Marc Mimram, Arup ing. and Martin Roy ing.; in Situ atelier d’architecture, Bouthillette Parizeau ing. and SDK ing.) in its relationship between architecture and nature. With the new identity of glass architecture, the Insectarium building became invisible, to the benefit of nature and its interpretation. This vision of the project allowed the creation of a space where insects, nature and humans could live in symbiosis.

Marc-André Carignan, a regular contributor to the Métro newspaper at the time, concluded that “[the] simple but effective design will aim to stimulate our five senses through a metaphorical journey that will immerse us in the skin […] of insects.” With the reopening of the Insectarium scheduled for the summer of 2021, it will soon be possible to judge how well this has been achieved.

The competition for the renewal of the Biodome was won by the team made up of the American/English architectural firm AZPML, with the Quebec firms KANVA and NEUF architects, and the engineering firms Bouthillette Parizeau and NCK. The winning proposal focused on total immersion within four ecosystems.

By working with the shape of the large walls under the dome originally designed by Roger Taillibert as the Olympics velodrome, the cultural complex exploited the interstitial spaces to offer a potential for renewal. With its innovative and immersive interventions, the winning project distinguished itself from the three other finalist teams (Cloud 9, Coll. Leclerc, N.F.O.E., Pageau Morel ing. and SDK ing; Atelier Ville, MARC ARUP and Martin Roy; BNIM, L’OEUF, Architecture 49 and Dupras Ledoux). As a support for the museological path, the walls provide visitors with a diversity of points of contact with nature and wildlife.

Visiting the building at its opening in 2020, journalist T’Cha Dunlevy confirmed in a Montreal Gazette article that “once inside, visitors are greeted by an organic convergence of imposing white walls that bend and tilt playfully – evoking the shapes of American artist Richard Serra’s stunning steel sculptures – leading to a luminescent atrium from which one can access any of the Biodôme’s five intuitively reimagined worlds.” The renewed Biodôme is no longer just a museum, but an educational center where visitors can wander freely.

The team composed of the French architectural firms Lacaton & Vassal and Frederic Druot Architecture, the Quebec firm FABG and the engineering firm SNC Lavalin was the winner of the competition for the Glass Pavilion at the Botanical Gardens.

It was to be a compact glass box highlighting the rose garden in a daring and fragile way, which was undoubtedly risky, given the harsh winter climate in Montreal. Characterized by a simple volume and a double envelope, its architecture was intended to provide a protected and clement microclimate for the precious rose collection.

The “glass rose garden” became not only a poetic and decorative place, but also a spot for meetings and discussions consistent with the Botanical Garden’s mission of conservation, education and research. However, even if the three other finalists (In situ atelier d’architecture, Bouthillette Parizeau ing. and SDK ing.; Saucier Perrotte, Pageau Morel ing. and Pasquin St-Jean ing.; Kuehn Malvezzi, Pelletier de Fontenay, Jodoin Lamarre Pratte, Dupras Ledoux ing. and SDK ing.) met the criteria envisioned by Espace pour la vie, the winning project stood out with a clear concept illustrating a refined and minimalist aesthetic, for a place where poetry and conviviality should meet.

These three competitions were promising. The city was set to realize the work of three major international architectural firms: Kuehn Malvezzi, AZPML and Lacaton & Vassal. But, political shifts would affect the fate of the projects. As Jeanne Corriveau wrote in Le Devoir in 2017, “In 2014, Pauline Marois’ government had granted $45 million to fund three Space for Life projects, namely the expansion of the Insectarium, the redevelopment of the Biodome and the construction of a glass pavilion at the Botanical Garden. However, this funding was withdrawn by the Couillard government, forcing the City to assume the entire cost.”

As a result, it was the Glass Pavilion project that was dropped, while the rehabilitation of the Biodome and the Insectarium were green-lighted.

Since then, Lacaton & Vassal has been awarded the renowned Pritzker Prize in 2021. This prize—the self-proclaimed “Nobel of architecture”—has amply underlined the qualities of sobriety and economy of this French studio, which advocates for a sustainable architecture where responsibility does not only concern human beings, but also the planet—values very much in line with the mission of Space for Life. The organizers must certainly regret all the more bitterly the abandonment of the Roseraie. There is still time to look for financing—but the bill for professional fees this time may be much higher.

By Andy Nguyen and Jean-Pierre Chupin