Public works architecture in Vancouver had its heyday in the mid-century. In the 1950s, municipal operations centres like the Dal Grauer substation on Burrard (designed by Ned Pratt and BC Binning) reflected both elegance and pragmatism. Later 20th century work was often consigned to the realm of pre-engineered sheds or tilt-up concrete garages, hidden from view in out-of-the-way locations. Municipal workers would come and go, largely unseen by the public.

Now, the city of Surrey, at the southern suburban edge of Vancouver—and with twice its land mass and a rapidly gaining population—is reviving the bid to make public works infrastructure beautiful. 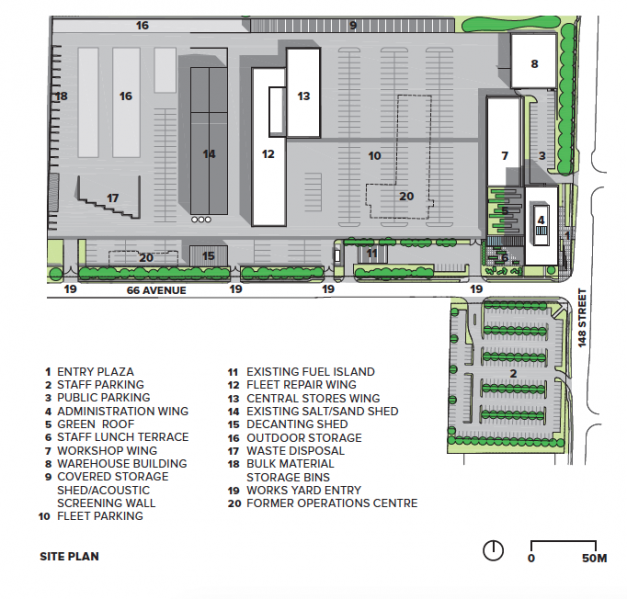 The bold new commission for the Surrey Operations Centre and Works Yard Redevelopment follows in the footsteps of more prominent public projects in the area, such as Bing Thom’s main library and shopping mall-university complex in Surrey Central. Standing in their league as a design-forward exemplar, the Operations Centre recently received an AIBC award, along with two other City of Surrey projects: the Guildford Aquatic Centre by Bing Thom with Shape Architects, and the Grandview Aquatic Centre by HCMA Architecture + Design.

With its simple palette of steel, glass and rough-hewn cedar, the Surrey Operations Centre provides a highly functional series of buildings that serve as a mini-campus for Surrey’s parks, engineering, facilities and bylaws departments. However, its elegant yet unassuming design goes beyond the purely functional, effectively offering a new civic landmark for the burgeoning community.

The complex is one in a series of municipal operations centres that RDHA has designed in the past decade (including, notably, the sleek Newmarket Operations Centre in 2010, which won a Governor General’s Medal). It represents, says design architect Geoff Miller, MRAIC, an attempt to “redefine the building type in terms of architectural quality and demonstrate that, contrary to tradition, it can be approached with as much seriousness and refinement as any other typology.”

More and more, says Miller, public works building are “becoming essential hubs for the efforts of our municipal governments to reinvent themselves as environmentally sustainable institutions, through the work of the Parks, Engineering and Operations departments in particular.”

“Our goal,” he says, “is to make this transition visible to the public and to change the expectations of the people who work in these facilities. They are no longer simple sheds hidden in industrial parks on the outskirts of the community, but sophisticated places of public interface, city administration and skilled labour.”

Working with the City of Surrey, adds architect of record Craig Taylor, MRAIC, was “ a pleasure” due to their “commitment to forward-thinking and sustainable design.” His firm is no stranger to civic projects—it won a BC Heritage Award for a 2009 conversion of a 1912 school into a community centre, designed the South Surrey Recreation Centre, and is at work on a new city arena. Taylor credits current city manager Vince Lalonde for championing the project and “pushing us to excel and create something special.”

The site itself is revealing of Surrey’s recent sea change. Located on 148th Street, the new operations centre is close to the open farmland that was once the area’s mainstay. It’s poised at the junction between suburban single family housing to the east, and an industrial zone to the west. The Centre spans both aesthetics, creating a home away from home for the city’s municipal workers.

There is a sense of shelter as one arrives at the main administrative building, which is designed to mitigate the shift in scale from residential to industrial and includes an office wing and a workshop wing. Angled cedar soffits draw you in, while the high-performance glass envelope reflects glimpses of the community back to itself. A subtle interplay of solidity and transparency, gravitas and transcendence plays out in the street-side façade. This is especially evident in an oculus-like, cedar-clad balcony carved out of the curtain wall on the north end—a neat effect that repeats on all elevations. Similarly, thin rectangles of glazing punctuate the cedar entranceway, setting a theme that continues throughout.

Moving north and west into the complex, a series of staggered, rectilinear buildings of varying heights fold organically into the site, which slopes downward from north to south. A large salt and sand shed remains from the municipal operations complex that previously occupied the site; other structures, including the former main operations building, were demolished. In the new complex, office areas face the residential area, while the noisier fleet maintenance section is located towards the west side.

“One of the main challenges,” explains Taylor, “was designing a new centre [on the bones of the old one] while still maintaining operations.” To do so, a key strategy was locating the new office building on the site of the old facility’s parking lot. Conversely, after the old building was demolished, its site became a vehicle storage area.

While the new Operations Centre delights aesthetically, it also improves functionality. A central atrium in the main building acts as a light-filled core, linking disparate departments—previously located on different sites—and encouraging conversation and collaboration. Open stairwells connect four floors—three for offices and a top level (recently rented by location scouts for a new Schwarzenegger film) slated for future growth. The offices open to a green roof, atop the adjacent workshops, that includes space for employees’ vegetable gardens. 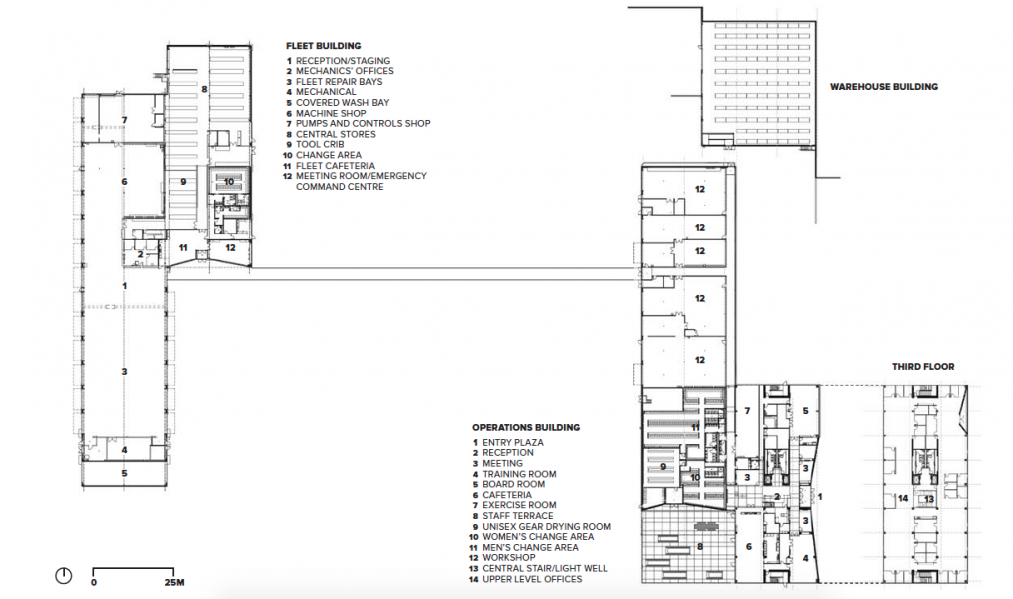 At ground level, the lobby acts as a gathering space for workers coming and going, while doubling as a mini-museum of technology. At its far end, a glass case displays century-old pipes and valves. A wood ceiling, patterned with slices of rectangular LED lights and sloped downward for a sense of intimacy, leads visitors to a cedar wall displaying a hollowed-out log that was once used as a water pipe.

Men in orange overalls pass through the space, returning from the field after a day’s work and retreating to the adjacent employees’ gym and shower area. They pass kids’ drawings of the centre adorning the lobby’s walls. The scene evokes a Richard Scarry tableau, filled with busy workers responsible for keeping the city humming along.

The separate fleet maintenance building—filled with the sweet aroma of a cedar mill on an adjacent industrial site—is equally impressive. Stylish airplane hangar doors flip up to act as rain canopies; inside is a boy’s own adventure land of plows, tractors and excavators. The big, open industrial space in itself is so appealing (to this design writer, it’s evocative of a supersized Brooklyn loft) that one imagines workers may want to linger here past their shift times.

Another cedar soffited entranceway beckons to an adjoining wing, edged in steel and punctuated by long rectangular glazing. This houses vehicle dispatch, a general store as well as an emergency command centre. Along the north edge of the property line, a linear storage outbuilding doubles as an acoustic buffer for nearby houses. It reads like an industrial playground: with fire hydrants, pipes, and even uprooted plastic horsey rides on display, eagerly awaiting installation. One can only imagine what kind of public art Alan Storey—an artist known for his whimsical mechanical installations— will produce here next month.

In suburban Surrey, where public architecture trumps residential design—so fetishized in neighbouring Vancouver—the centre not only provides a refuge and operations hub for city workers, but also ushers in a new pride of place in public works architecture.

As a roads and drainage worker in orange overalls, returning from a day of ditch excavation, puts it: “Our old building was an asbestos-filled, cramped space, with cracked drywall. This place is environmentally friendly, has a lunch room, gym, lockers and lots of space for equipment storage—and it looks great. It was way beyond our expectations.”

Hadani Ditmars is a Vancouver-based journalist and photographer. Her forthcoming book Between Two Rivers: a Journey Through the Ancient Heart of Iraq is out next year with IB Tauris.