Ninety-two years ago, Ontario-born Elsie Reford (1872-1967) transformed her fishing camp along the St. Lawrence River into an impressive garden. Encouraged to take up horticulture following a bout of appendicitis, Reford spent the following three decades nurturing to life a garden replete with rare species, such as Himalayan blue poppies, which she gradually adapted to the Quebec climate.

Since 1962, Reford Gardens — also known as the Jardins de Métis — has been a National Historic Site of Canada, open to the public. Reford’s legacy lives on across twenty acres of lush and scenic land, home to more than 3,000 species of plants from different locations worldwide.

There’s a family legacy, too. In 2000, Elsie’s great-grandson, Alexander Reford, co-founded an International Garden Festival to bring contemporary installations to the site, as a way of presenting both a complement and counterpoint to the historic gardens. (Reford is currently director of both the Gardens and the Festival). The Festival is a showcase for the creative talent of architects, landscape architects and designers.

For its 18th edition, the Festival has added six new installations, chosen from 162 submissions received from 30 countries. The call for proposals invited candidates to put the concept of “play” into practice—resulting in interactive pieces that inspire visitors to engage with landscapes. The designs are conceived as antidotes to the creep of nature-deficit disorder, bringing back the magic of the outdoors.

Together with projects retained from past years, this summer’s visitors enjoy some 26 installations that encourage them to pause and reflect—or get moving and play. The following projects are new or revamped for 2017, and are on view until October 8. 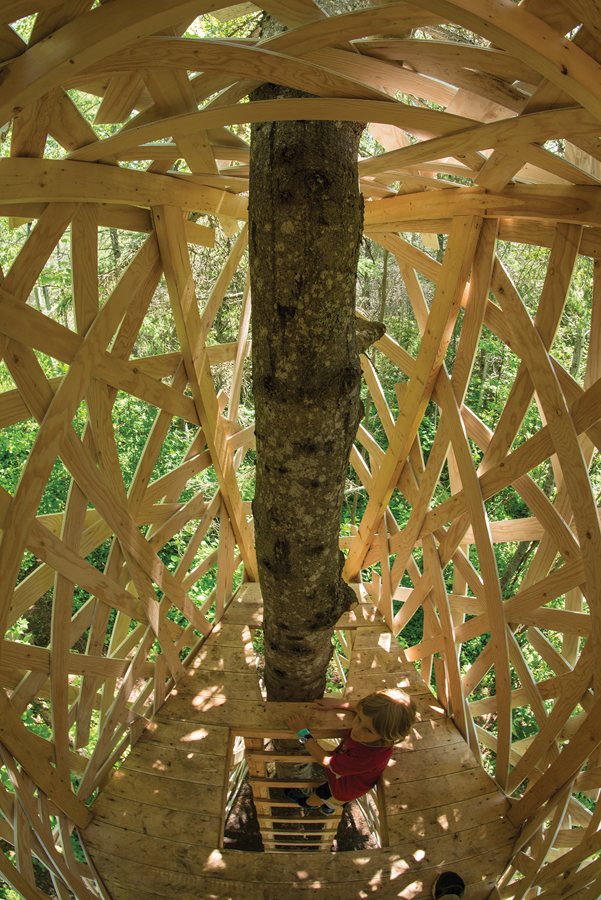 Inspired by a cocoon and constructed directly into a tree, La Chrysalide beckons to visitors to climb inside and escape from their surroundings.

“Our installation reflects the pause in time between childhood and adulthood,” says Lacombe, describing the metaphor of a cocoon as a place where caterpillars become butterflies. “It invites you to climb inside and experience a moment of reflection and introspection.” La Chrysalide is a place to dream, reflect, and focus on your feelings. 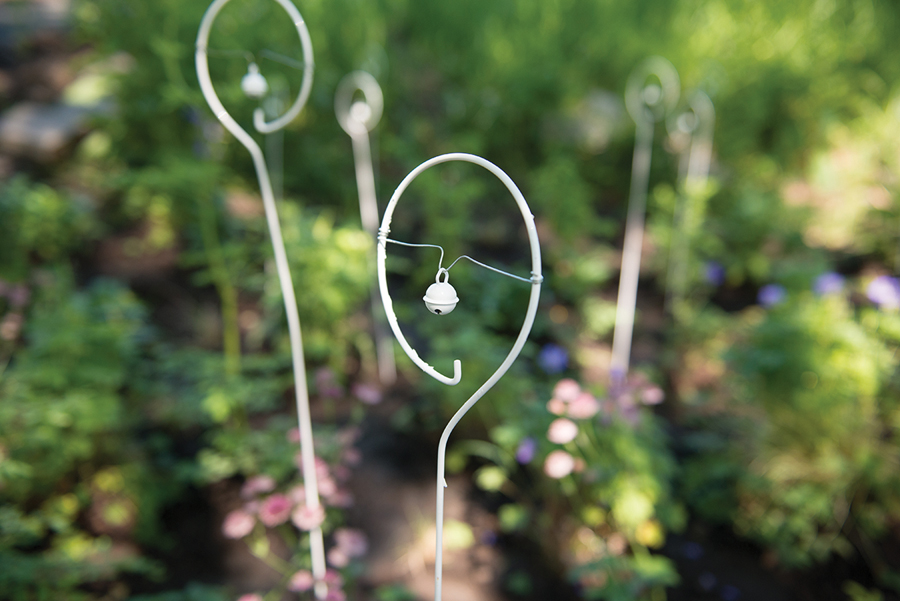 Soundcloud invites visitors to lie down on a soft, circular bed in a forest clearing, surrounded by bells planted in the ground and hung from trees.

“It’s a little bit like meditation,” says Ballhaus. “It stimulates your senses. As you close your eyes and open your ears, you’ll start smelling the flowers and hearing the bells, and will become more conscious of what’s going on around you.”

The idea is to establish a dream world, where the artificial and natural collide, says Wyss. 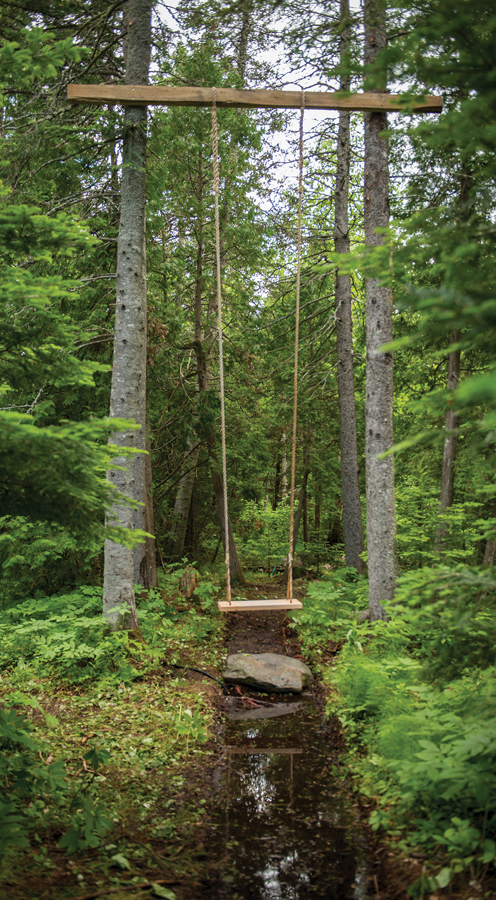 Conceived as the materialization of a short poem, HAIKU is a simple swing suspended over a flooded footpath. Accessible by a single stepping-stone, the installation “expresses the cycle of time between rainfalls,” says Garcia Pérez.

HAIKU allows visitors to pause and swing for a moment between storms, the latter represented by the footpath that continually fills and drains over time.

Garcia Pérez is an architect and professor at the University of Granada in Spain. Vignotto is an architect. Together, they founded the architectural practice and academic research group GRAVE in 2015. 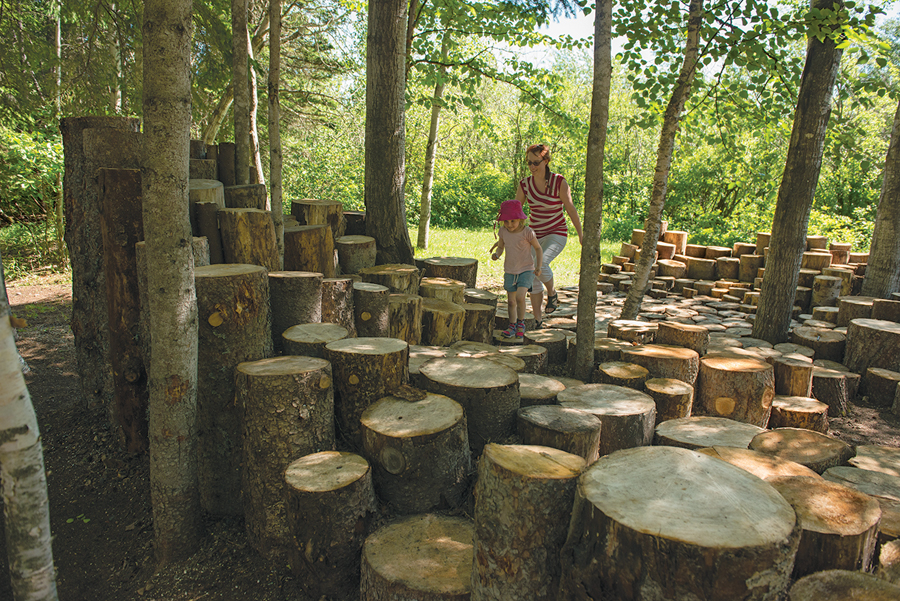 Located deep within a forested setting, The Woodstock is an unconventional playground made of wooden logs set vertically into the ground.

Intended to make children feel like giants as they walk and jump among the stumps, The Woodstock encourages visitors to contemplate the world at their feet. Taken in its entirety, the installation also reflects on our ecological footprint.

Atelier YokYok is a group of architects, designers, creators, teachers and architectural engineers from Paris, France. 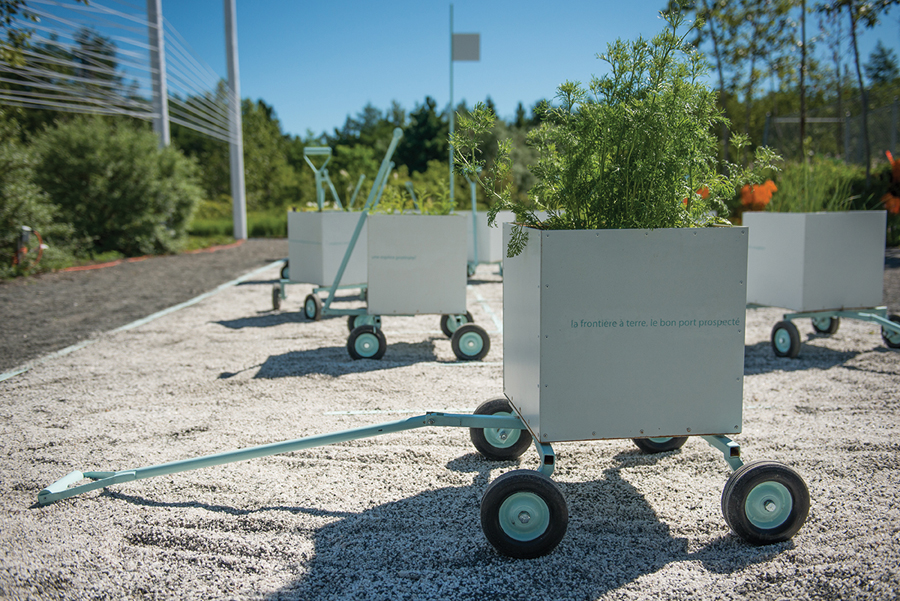 Presented as a collection of small mobile gardens, L’Escale invites visitors to “approach and discover the vegetation of its little worlds,” says St-Pierre.

Users grab hold of plant-filled wagons and move freely around the site with them, establishing a dialogue with nature that is at once intimate and real. “We wanted to make mobile gardens that are both precious and personalized,” says Parenteau.

Collectif Escargo is a group of artists, designers and landscape architects based in Montreal. 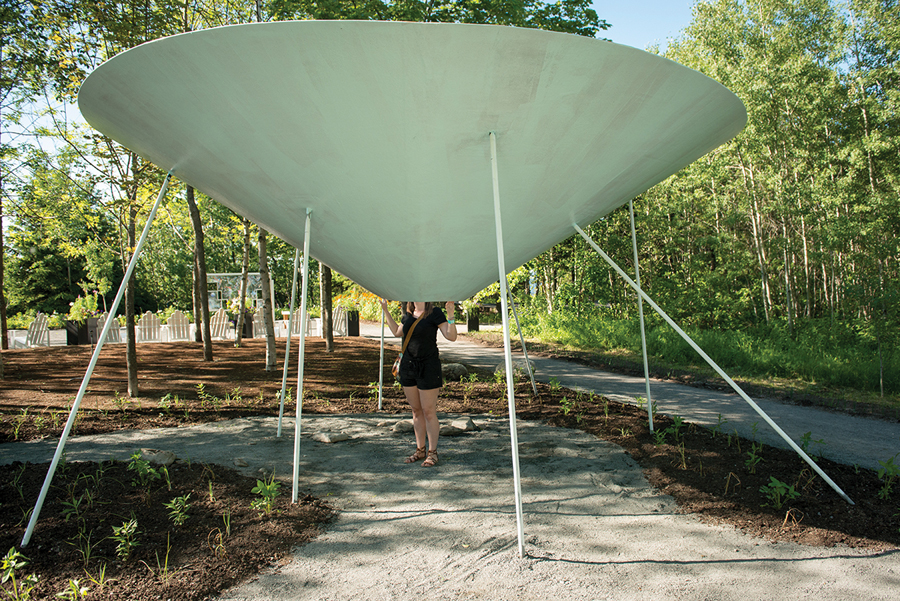 Celebrating colour, shapes and sounds, Paysage Euphonique is a set of devices that facilitate communication and expression.

Visitors are encouraged to play with speaker-like devices and spread sounds throughout their environment, allowing others to listen in. Euphony—or the harmonious combinations of sounds—is the desired result.

Benech is a designer, architectural coordinator and artistic director on various projects in Quebec. Campeau is an architect with Paul Bernier Architect in Montreal. 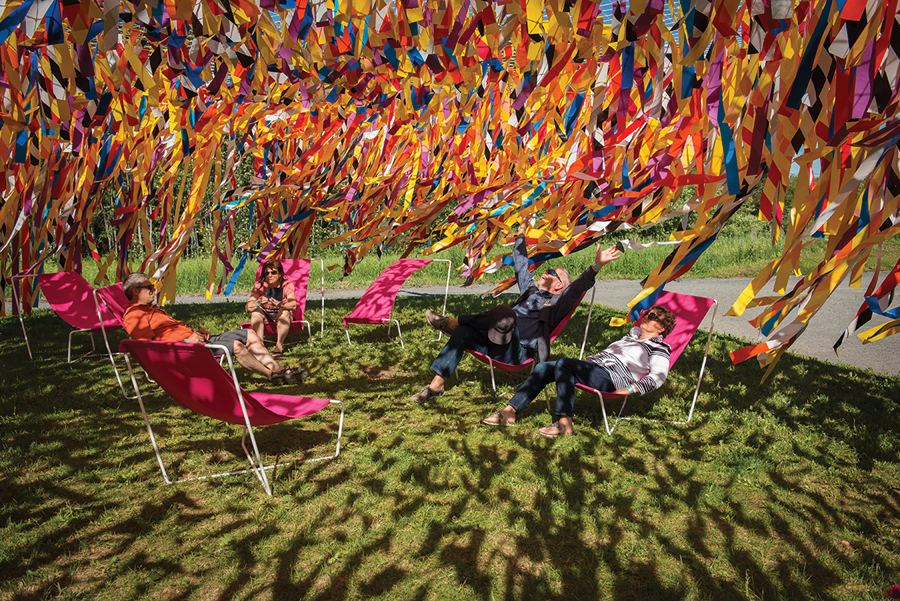 First exhibited in 2014, Vertical Line Garden has been transformed each subsequent year. “In architecture, you don’t get a chance to redo or change anything,” says Jamrozik. “Every year, the Festival has provided us with an interesting opportunity to adapt.”

This year, the team has lifted their installation entirely from the ground, creating lounge spaces under canopies of colourful ribbons that ripple in the breeze. “We’ve created abstract geometric patterns that evoke some of the language of traditional landscape design,” says Kempster. The installation tempts visitors to travel inside and experience the installation’s intricacies, instead of simply circling it from outside.

Jamrozik and Kempster are Canadian designers and artists, as well as professors in the Department of Architecture at the University of Buffalo. 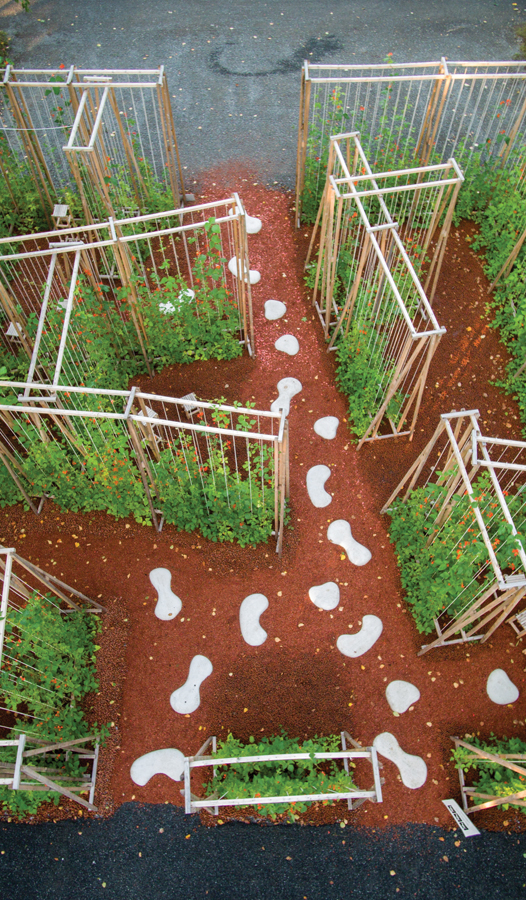 Drawing on the children’s tale of Jack and the Beanstalk, La Maison de Jacques — first presented in 2016—is a house made of wood and beans that bloom and flower in the summer months. “We’ve enhanced our installation this year,” says Romy Brosseau, describing the introduction of different kinds of beans that will bloom in red and yellow tones. “The idea is to encourage people to think about the story of Jack in another way.”

The house has nine rooms that twist and turn in seemingly unplanned ways, allowing children to play hide-and-seek in an imaginative setting. For adults, the installation hints at how art and architecture fit into nature. “It’s about the historical gardens and contemporary gardens meeting at the same place in time,” says Brosseau.

Brosseau, Faille-Faubert and Gagné-Loranger are Masters in Architecture graduates from the Université Laval in Quebec City.

ACDF asks: What’s the future of the post-COVID office?