The Octagon resists the notion that architecture should be either formally interesting and autonomous from its site or completely contextual. Instead, the project proposes a complex figurative form that, in spite of being a new building, is inextricably linked to its surroundings. It deftly mediates between an existing Victorian semi-detached house and the rapidly changing urban environment around it.

Located directly behind the vibrant commercial strip of Toronto’s Queen Street West, the property is situated in one of the city’s most sought-after neighbourhoods. The area has been gentrified over the past decade, and as property prices persist in rising and development pressures increase, it is inevitable that it will continue to change. But despite new developments to the south and the ongoing expansion of the adjacent Drake Hotel, this corner has managed to hold on to its distinctive character. It’s a place where small-scale residential and commercial uses mix, supporting an active street life that extends into the neighbourhood’s gritty laneways. 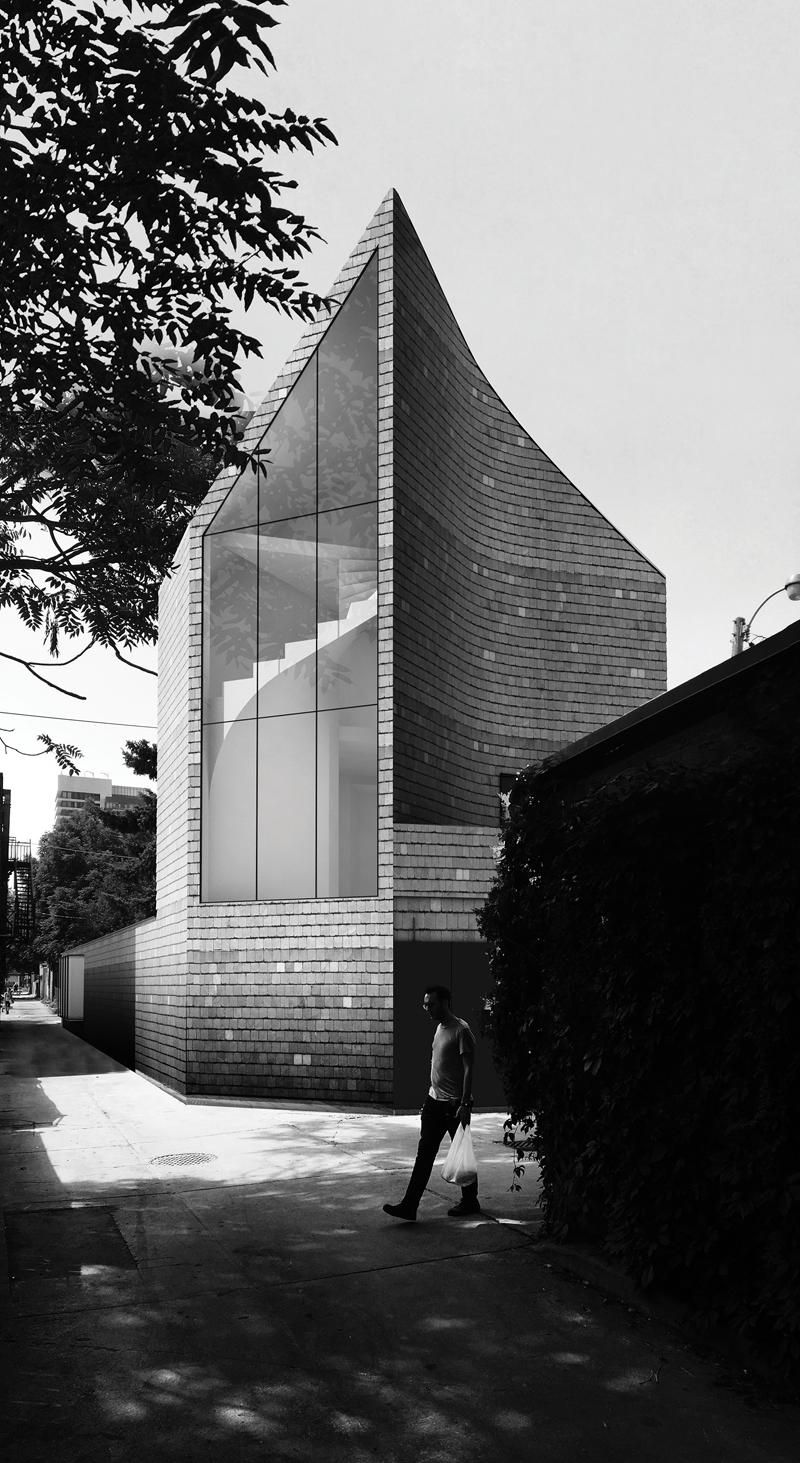 The new rear laneway suite is developed around the idea of a long path—a singular organizing circulation element—that, both in plan and in section, weaves through each room of the unit, tracing a route from the public street up to the private upper-level mezzanine. Without being overly prescriptive, a series of spaces along the way aims to support the rituals of daily life. An enlarged corridor leads from the street, with a counter facing the laneway that allows the owner to serve coffee to locals heading to work. Across, the corridor opens to a garden shared with the main house, suggesting al fresco dinners with guests. The corridor terminates in a staircase that spirals up through a series of loosely defined spaces: a living room on the second floor, a sleeping area on the third floor, and a private study for a quiet night of reading on the upper floor. 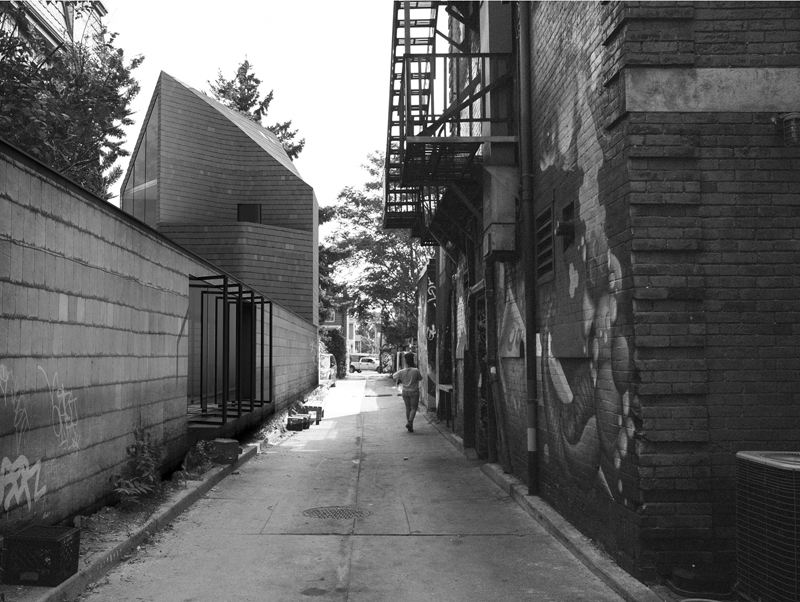 Formally, the project aims to be both functional and expressive. Borrowing the form of octagon turrets found nearby, the solid mass in the rear laneway extends upwards. Balconies are carved out of the volume, and a slight twist in the roof ridge creates a form that is both responsive to its surroundings and dynamic.

The project uses light wood framing for ease of construction, and is clad in slate shingles. This material references the slate roof of the main house, and adds variegated texture to the long wall in the laneway. Throughout the structure, details are kept concealed to reinforce the idea of the project as a single volume. 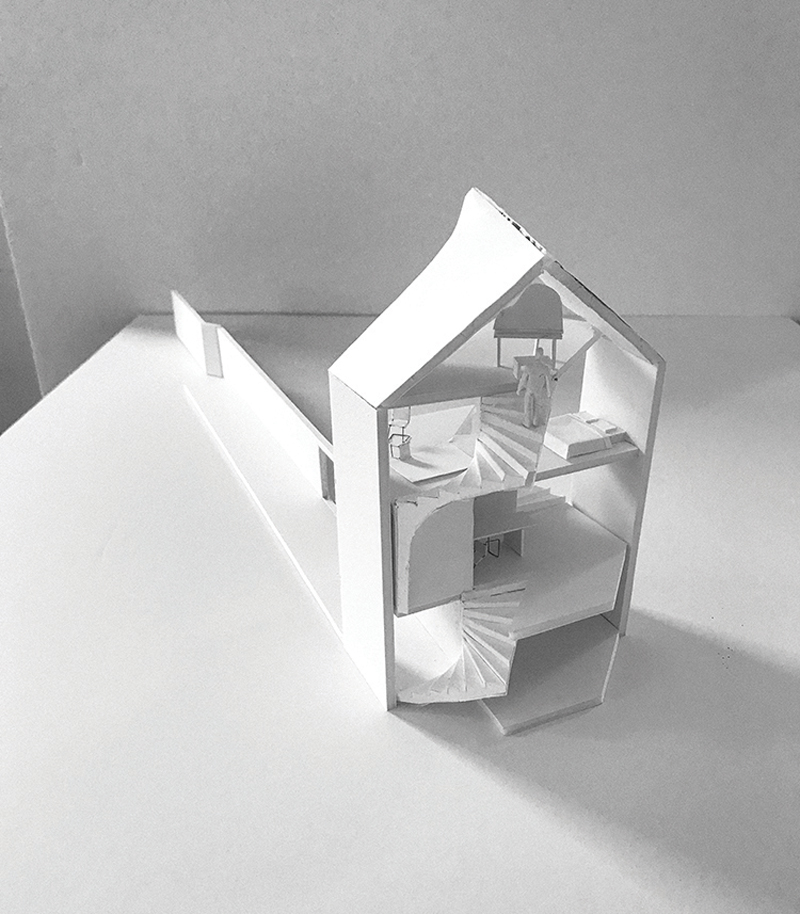 While increasing constraints and lowered ambitions make it challenging, architecture still has a role to play in imparting identity to our cities. At a broader level, this set piece encourages new development to find virtue in overlooked spaces, and suggests that function need not trump form. At its best, architecture allows for a range of functions to take place simultaneously, and proposes new forms that are innovative, purposeful and expressive.

Monica Adair :: The Octagon breaks the mould of what we typically think of as a laneway house. It starts to push how these dwellings are used, and also explores how the broader program of residential living can be transformed. It rethinks what is liveable. The long, narrow circulation bar becomes an object for living as well as an urban artifact. Everything is carefully worked out. It’s very clever and bold.

Ted Watson :: This project is small in size, but exciting in its larger implications. Not only is it a beautiful object, but the form is derived from its functionality and the manipulation of the geometry through the section. It’s anonymous but iconic, it’s a residential project that enriches the public realm, it’s an enclosure while it’s also a compositionally strong form—it has an ambiguity that makes it powerful.

David Penner :: Really gritty and really sophisticated at the same time. It’s tied in to the Second Empire style of the existing house. I like how it recognizes the side lane as an urban artery, and provides eyes to the lane to make it a safer space. I see it as an extension of the spirit of the nearby Drake Hotel.