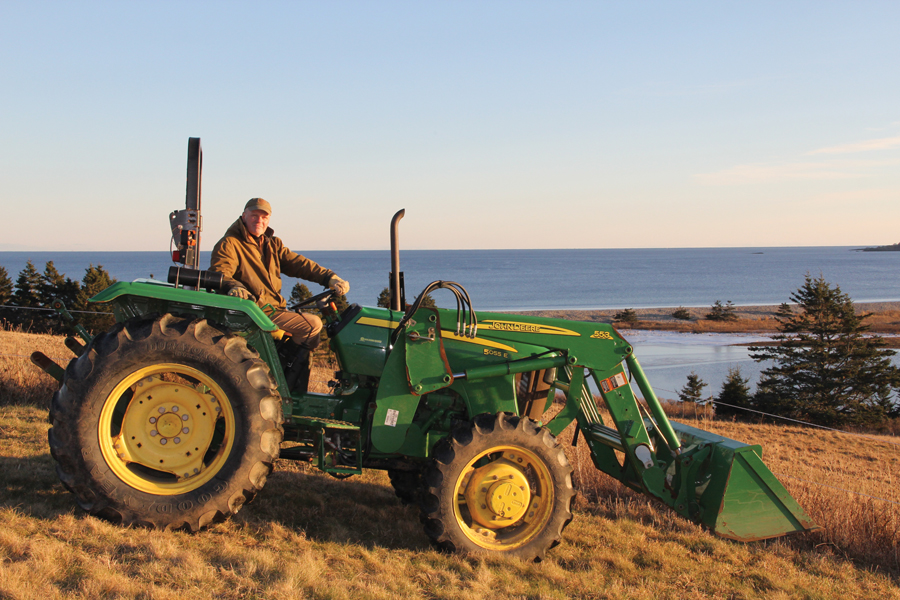 brian mackay-lyons atop his tractor

Teacher
I first met Brian in 1993. I was at the studio in my first week of architecture school at Dalhousie University. Brian entered the studio one evening and asked the students, “Where is the guy who thinks he can play ping pong?” That night I lost 6 games to 0.

As a Newfoundlander from a small community, I quickly and intuitively gravitated towards Brian as a teacher. At the age of 38, he was already an accomplished architect carving out a world that was rooted in place, craft and material culture. Our conversations in the studio continually centred on constructability and meaning—notions we both believed had a place amongst the fundamental issues of architecture.

This conversation was ramped up a few notches during the first Ghost project in Kingsburg. Campfire seminars were where the learning happened. This is where I fully experienced Brian’s deep commitment to education.

Mentor
Brian is a master draftsman in the traditional sense: he sees drawing and sketching as the core skills of an architect. He is in a perpetual state of sketching.

Early on in my career, the office was in a converted garage attached to Brian’s row house in Halifax’s North End. One night, I proudly produced a nice set of sketches for his review. Early the next morning, he looked at my drawings and remarked, “Good work, but you really need to work on your sketching.” Before I could respond, his three kids came to him one by one and gave him a kiss before they departed for school. Is this the life of an architect, I wondered?

As an intern, I was guided to always achieve high standards. With Brian’s exacting expectations—knowing some would quit, but others would persist and flourish—he never let his mentees settle for simply “good enough.” After sketching together for 20 years, I can now draw.

The way Brian set up his studio fostered the idea of a master/apprentice relationship. This reflects his time spent with Barton Myers and Charles Moore. It was very important that we sit across the table from each other with the drawing between us, so we could both work on it. It was learning at its best. To this day, Brian will draw a site plan from the land and I will draw it from the sea.

Partner
Brian has the ability and capacity to be always “on,” not distinguishing between being an architect and just enjoying life. One day, I went to his farm to discuss a project. When I arrived, he was finishing up some chores on his tractor. That day, we chased sheep, sketched his new paddock layout, designed a house, fixed a fence, drank beer, and designed an embassy. This was a good day in architecture; the relationship between work and life was natural.

In 2005, Brian and I formalized our working relationship and formed a partnership. Since then, his collaborative way of working has continued to be fine-tuned. His design process is ever more inclusive. Ideas can come from anyone and anywhere: an intern, a client, his wife. Brian’s commitment to collaboration and inclusivity has been a founding value for our partnership and for the firm.

Brian’s constant pursuit of excellence and meaning in architecture—and in life—continues to inspire me. It has been an honour to be his wing man over the last 22 years.

Congratulations to my teacher, mentor, partner and friend on deservedly receiving such an honour.

Talbot Sweetapple is a partner at MacKay-Lyons Sweetapple Architects, and Professor of Practice at Dalhousie University.