Slate Asset Management introduced Studio Gang’s design for a new block plan and mixed-used tower at the southwest corner of Yonge and Delisle in Toronto during a community consultation session last night at 55 St. Clair Avenue West. Jeanne Gang, Founding Principal of Studio Gang, presented the vision for One Delisle to local stakeholders, including members of the Deer Park Residents Group, Yonge & St. Clair BIA and the broader community.

Designed in collaboration with local WZMH Architects – Architect of Record, One Delisle will bring broad-based urban improvements to the Yonge and St. Clair community through the infusion of new residential and retail uses. Located at an important transit node in midtown Toronto, the project aligns with Slate’s long-term vision to re-establish Yonge and St. Clair as a vibrant, pedestrian-friendly neighbourhood with thriving retail, welcoming open spaces and world-class architecture. 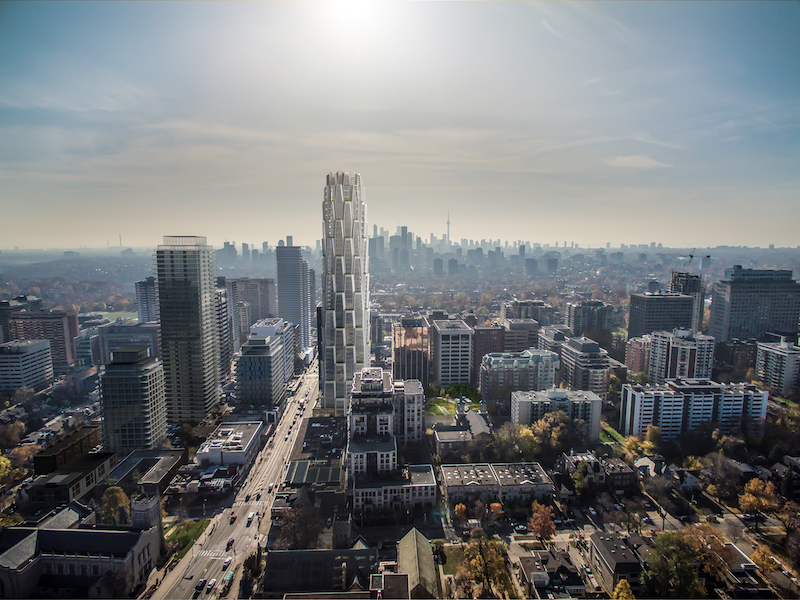 “The proposed building at One Delisle is only one component of this project. Because of our holdings in the area, we’re in a unique position to take a holistic city building approach,” says Brandon Donnelly, Vice President of Development at Slate Asset Management.

Slate has been acquiring property in the midtown neighborhood since 2013 and currently holds ten properties, including all four corners at the intersection of Yonge Street and St. Clair Avenue.

“One Delisle introduces a new approach to tower design in Toronto. We’ve brought the kind of outdoor spaces you usually find in mid-rise architecture to high-rise design,” adds Donnelly. “The building’s form was driven by two main considerations: a desire to respond to the local context and a desire to create comfortable and expansive outdoor space that can work in Toronto. Every residence in this building will have a generous terrace or balcony.” 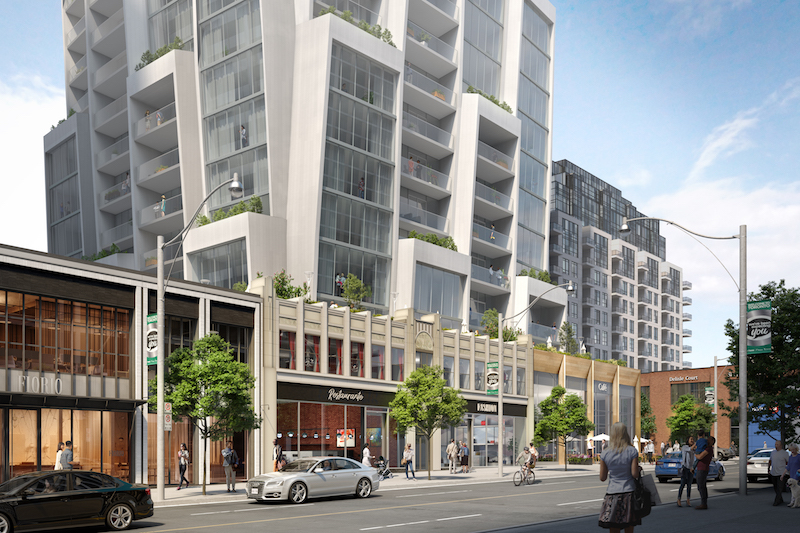 Rooted in the existing architecture of the neighbourhood, One Delisle aligns with the city grid at its base, as well as with storefronts along Yonge Street. The proposed design also retains elements of 1498 Yonge Street, preserving the community’s main street character. The generous setbacks on both Yonge Street and Delisle Avenue allow for wider sidewalks, increased sunlight at street level, and new fine-grained retail—all of which will create a more enjoyable pedestrian experience.

Moving upward from its rectilinear base, the building gently transforms into a compact, sixteen-sided tower that dramatically reduces shadows on the surrounding streets and neighbourhood. This transition also responds to the site’s grade change and the bend along Yonge Street, which makes the location of One Delisle a view terminus and an ideal gateway to the Yonge and St. Clair community from the north and from other neighbourhoods in the city. 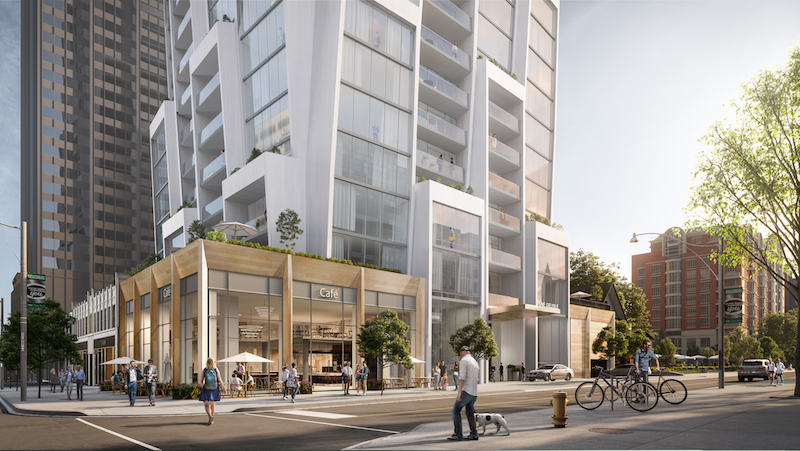 The tower is designed as a series of eight-storey elements, which nest together as they spiral up the façade. The angled, alternating geometry allows for variously sized floor plates that result in unique conditions within the units, bringing a diversity of residential options to the mixed-use neighbourhood. Tuned to Toronto’s climate, generous planted terraces atop these elements and protected balconies within them extend outdoor living into the shoulder seasons.

“The geometry of the façade, and the self-shading it provides, allows each living space to stay cool in summer, while also optimizing winter light,” says Jeanne Gang. “This gentle pitch frames indoor-outdoor connections on the balconies and terraces that spiral up the building in an organization inspired by organic growth and form.” 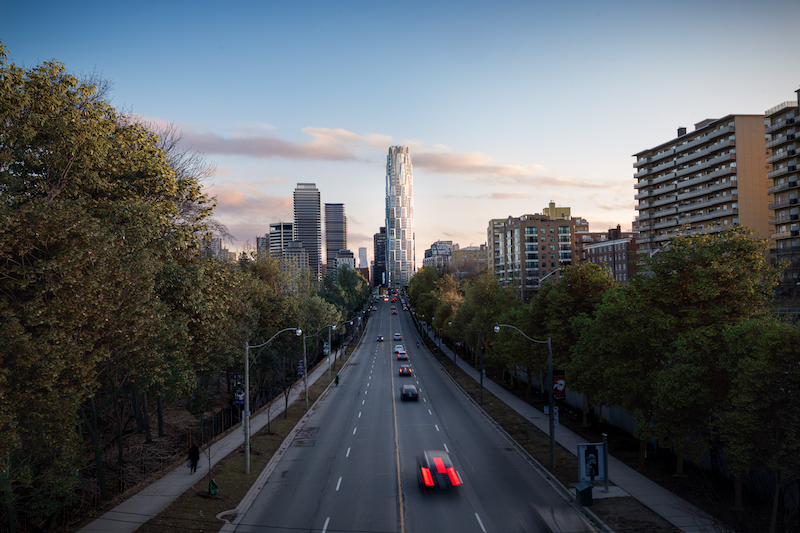 Based in Chicago, New York, and San Francisco, Studio Gang is widely recognized for architecture that elevates the urban environment while cultivating beneficial connections among people and with their natural and urban environments. This ethos is visible throughout Studio Gang’s diverse portfolio, which includes Aqua Tower in Chicago, Folsom Bay Tower in San Francisco, and 40 Tenth Avenue along the High Line in New York—each of which emphasizes connections between people, the city and nature. One Delisle will be Studio Gang’s first tower in Canada and Slate’s first ground-up development in the area, signalling a unique collaboration that combines global experience and high design with a significant, long-term investment in the Yonge and St. Clair neighbourhood.

WZMH Architects has been working collaboratively with Studio Gang throughout the design process of this project. The Toronto-based company are assisting with bringing local perspective to the design process and the formal rezoning application with City of Toronto.

As part of ongoing efforts at Yonge and St. Clair, Slate has sought out opportunities to improve the public realm in a variety of ways, from commissioning an eight-storey mural by a British street artist in 2016 to introducing the new Gensler-designed ravine bench along Yonge Street last summer. One Delisle presents an opportunity to continue this legacy: in parallel with the project, Slate is revitalizing and expanding the Delisle-St. Clair Parkette, in collaboration with Janet Rosenberg Studio, through the incorporation of existing surface parking in the area.

Jeanne Gang faces the wolves of the neighbourhood associations with new tower proposal: “An architecture that is innovative but also human-scaled.” pic.twitter.com/wWeA7V5SQD

“Community and city input is always a powerful tool in the design and planning process,” says Donnelly. “The proposed design has been influenced by some of the early discussions we had with city staff and the local Councillor, and we’re excited to begin a more public discussion of the project.”

After debuting the design to the community, Slate will be making an official submission to City Planning. “We feel we’ve put forward a design that not only elevates the architecture discussion in this city but also maximizes community and public benefits. Now it’s time to talk about that publicly.”

Today, Slate launched a new website to collect feedback and provide updates to the community throughout the planning process. For more information, visit yongedelisle.ca.