The century-and-a-half-old University College is revitalized with a series of thoughtfully conceived and precisely executed moves.

A good cover song generates renewed appreciation for the original while establishing the validity of the reinterpretation. The main building of University College, the University of Toronto’s founding college, was designed by Cumberland and Storm and completed in 1859. After an 1890 fire gutted most of the interior, the college was grandly rebuilt. More recently this magnificent repository of gargoyles, stained glass and ornamental stonework was a golden oldie ripe for a remix: in addition to falling far short of 21st-century accessibility standards, “UC” needed a radical space usage rethink and extensive systems upgrades.

Kohn Shnier Architects and heritage specialists ERA Architects aptly characterize their UC revitalization as “strategic and surgical.” It encompasses comprehensive accessibility upgrades, the transformation of Canada’s first purpose-built chemistry lab into a conference centre’s main space, the renovation of the West Hall reading room and various classrooms and offices, a new café, and the return of UC’s library to its pre-fire home in the East Hall.

When John Shnier and ERA’s Graeme Stewart conducted a July 2022 Toronto Society of Architects tour, they stressed that although UC may look to 21st-century eyes like quaint Victorian medievalizing, it was radical in its day. Stewart describes it as Canada’s first example of “progressive eclecticism”: a mash-up combining historic Norman, Gothic, and Italianate elements with contemporary influences such as the Second Empire style. To Shnier, it was important for new revitalization elements to avoid the heritage renovation “trope” of minimalist steel-and-glass neutrality: “We were trying to solve oxymorons—to create interventions that are clearly of this moment, but at the same time look as though they’ve always been there.”

The University College Revitalization is a series of Big Moments, linked by changes that, without calling attention to themselves, do much of the heavy lifting required for modernization. The integration of accessibility ramps exemplifies the latter. Shnier recalls sneaking off after the RFP-stage mandatory site visit to do some measuring. Initially the university had thought mini-lifts would be needed to address UC’s frequent partial-flight level changes. Kohn Shnier and ERA argued, in their proposal, that a carefully conceived ramps system would be a viable and more gracious alternative. Mission accomplished: the revitalization’s chevron-patterned grey stone ramps, accented with landing-delineating black-and-white borders, mesh beautifully with the heritage interior palette. Similarly, automatic door openers, fire and life safety hardware and other mechanical and electrical control panels were consolidated into freestanding blackened steel consoles that made it possible to integrate a lot of new tech without having to run conduits up the walls.

The Big Moments, for their part, are woven into the heritage fabric with equal thoughtfulness. West of the elevated 19th-century main entrance, a new accessible entrance leads into the Paul M. Cadario Conference Centre. Circular in plan, the centre’s Croft Chapter House was originally UC’s chemistry lab. Pulled away from the rest of the building to contain explosions, the domed chapter house was one of few UC interiors not destroyed in the 1890 fire. This striking but long-underused room has been transformed into versatile, technology-enabled space. Its massive new ‘chandelier’, fabricated by Eventscape, improves acoustics and provides adjustable lighting, without closing off views to the dome. A perimeter bar rail tucked into the wainscoting—made of stained oak pickets infilled with fabric-wrapped acoustic material—supports the conversion of space that hosts presentations by day into an after-hours venue for drinks and socializing.

On the second floor, the soaring West and East Halls flanking UC’s main stairwell originally housed a museum and library respectively, but both were repurposed as examination rooms/study hall space after the 1890 fire. In the West Hall, now called the Clark Reading Room, new cylindrical pendants provide even, ambient light that shows off the freshly restored wall and ceiling woodwork, while downlights in the same fixtures provide illumination levels suitable for reading a book or newspaper. (Shnier notes that the university originally envisioned traditional chandelier-style lighting for this space. To demonstrate that the functionally superior but more contemporary-looking pendants would complement the interior, the design team gathered images of Oxford University’s Christ Church dining hall, which has pendant fixtures when it’s used as a Hogwarts set in the Harry Potter movies.)

The most complex of the UC Revitalization’s Big Moments is the return of the library to the East Hall. A mezzanine framed the original 1850s library, creating study nooks on two levels around the open centre. The new library reinstates this type of spatial arrangement. Shnier likens the new mezzanine to an oversized “piece of furniture” that houses an array of infrastructure and provides access for future systems modifications, while meeting heritage requirements for minimal contact with the 19th-century walls. Its construction was no easy feat: steel supports had to be embedded in the ground and threaded through first-floor classrooms. To reduce the mezzanine’s bulk, the main-floor stacks taper inward as they rise. Adding to the effort to dematerialize the volume, mirrored stringcourses were inset up the full height of the main-level stacks. (These mirror strips also let students approaching a study alcove know whether it’s occupied and give those sitting in these nooks a head’s-up when someone
approaches.) But these mitigation measures are not enough to counteract the impression of a lot of “furniture” squeezed into a smallish box—and the mirroring adds a dollop of cruise-ship glitz to an otherwise urbane heritage renewal.

There is, however, a lot to like in the library. The new stairway that swirls between the main and mezzanine levels is confident, modern, and purposefully playful: the ‘spikes’ incised through its white-painted steel balustrade enable even shorter students to take in the axial view enroute between levels. Seeing the restored stained glass and ornamental carvings at eye height adds to the pleasure of exploring the mezzanine. Here again, accessibility-improving interventions enliven everyone’s experience of moving through this building. At the mezzanine’s west end, the floor ramps up slightly around enclosed volumes containing study rooms and administrative space to provide access to an attic-level café and the new elevator.

Normally, an elevator addition barely rates a mention in a project review, but this one is a Big Moment. Unable to find a suitable interior location for an elevator shaft, the design team repurposed the quadrangle-facing ground-floor purser’s office and designed a new tower above it. Clad in overlapping copper tiles that are several decades away from acquiring an old-timey patina, the new elevator shaft nonetheless evokes heraldic associations, ranging from armour to dragon scales. It is of its own time—especially at night, when a soft red LED glow seeps out between the tiles—but also true to the spirit of University College’s historically allusive architecture. It belongs. And it’s arguably the signature riff in a revitalization that compellingly reinterprets University College for the 21st century.

Pamela Young is a Toronto-based writer and communications manager. 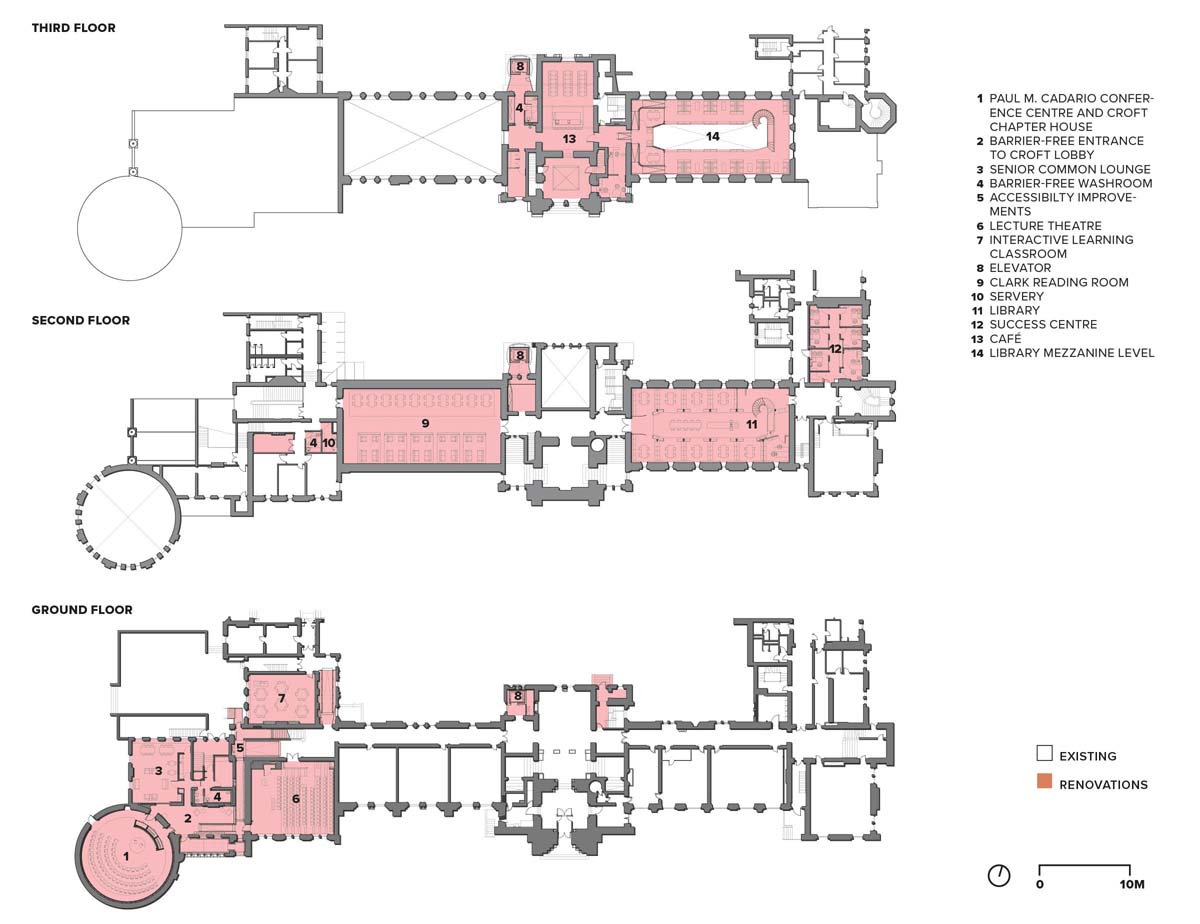