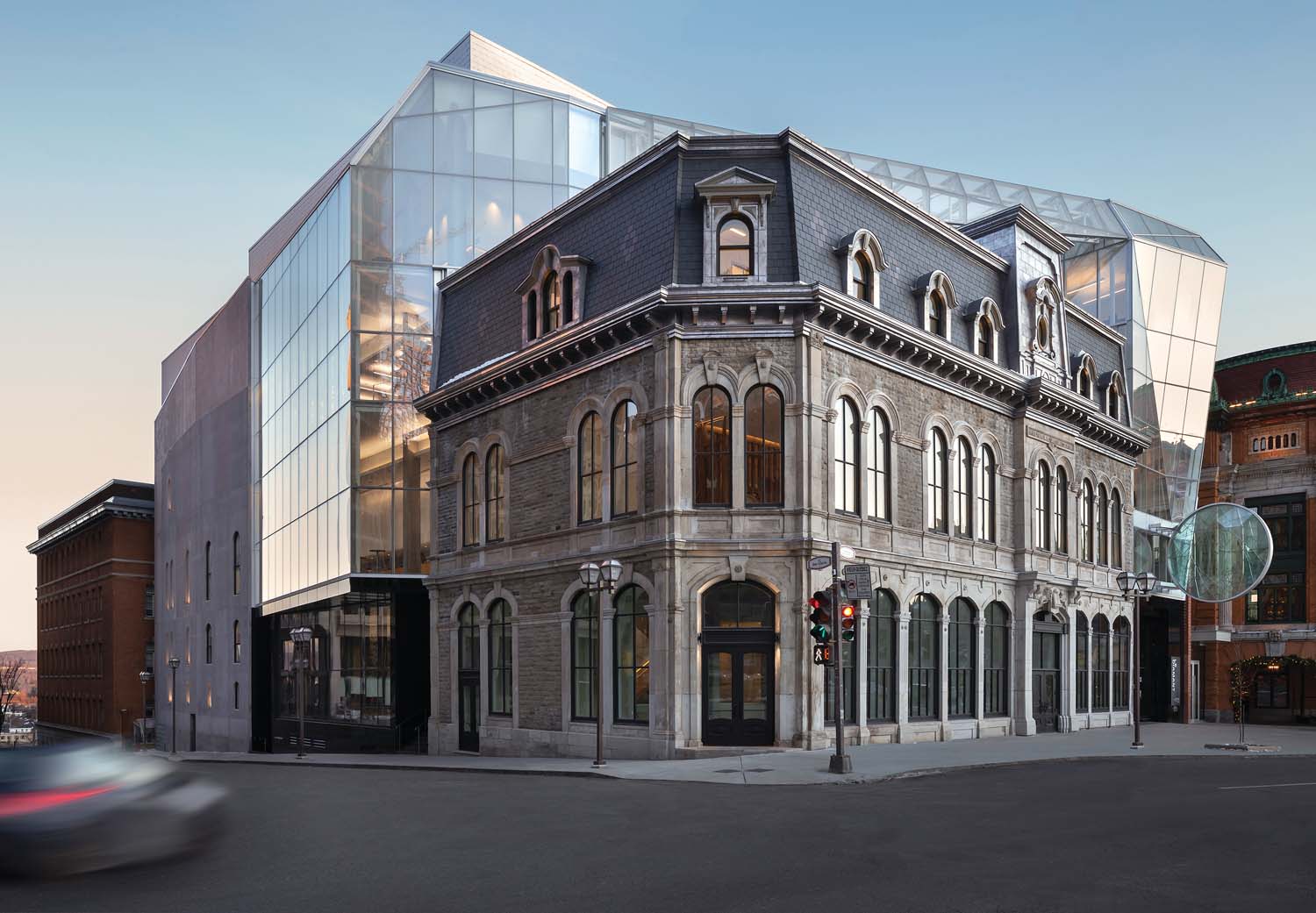 On the surface, the work of playwright, actor and director Robert Lepage is multifaceted. But at its core is often a dialogue between his hometown, Quebec City, and the world, and a concern with the relationship between memory and contemporary experiences.

Those dichotomies are embodied in the architecture of Le Diamant, the new home for Lepage’s theatre company, Ex Machina. The state-of-the-art facility, designed in joint venture by Coarchitecture, In Situ, and Jacques Plante, gives Lepage and his team a Quebec City stage for their internationally recognized works. The new building also explores the past lives of the site, in a similar way to the company’s previous headquarters in Caserne Dalhousie, a renovated Second Empire-style fire station (see CA, November 1997).

The venue’s name—French for “The Diamond”—stems from Quebec City’s site on Cape Diamond, a promontory that juts into the St. Lawrence River. Architect Jacques Plante, who was also behind the design of Caserne Dalhousie (with Marc Julien), originally proposed to transform an abandoned highway tunnel into a performance venue, not far from Le Diamant’s final location. After this idea fell through, Ex Machina held a competition in 2015 to reuse a long-abandoned downtown YMCA and adjacent Cabaret du Capitole, known for decades as the Cinéma de Paris.

The winning project ran with the idea of the diamond, creating a faceted glass atrium that joins two parts of the project: the partially rebuilt YMCA and a more opaque box replacing the Cinéma de Paris, and containing two performance spaces—the multipurpose stage and the creation studio, where audiences can view open rehearsals of works-in-progress. The atrium also connects two parts of the public square Place d’Youville, following an axis that echoes an earlier road on the site. The gesture, while a bit obvious, makes the building easy to understand visually, and connects with the history and urban context of the location. In contrast to Ex Machina’s dark environment in their previous home, the atrium in Le Diamant brings in an abundance of natural light for the offices and foyer spaces. From the outside, it breaks down the volume of the building.

While the competition concept stayed the same throughout a long design process, some changes were made. For instance, the team had initially planned to replace the YMCA’s mansard roof with a contemporary iteration, but instead moved forward with reconstructing the original. Such decisions reflect the care with which the designers worked with the theatre company to integrate the space-intensive program and technical requirements, without making the resulting building too massive or disruptive in its UNESCO heritage setting.

An especial challenge was accommodating the fly tower—something uncommon in multipurpose venues, but essential for Lepage’s productions. The design team used the extra height to visually bridge between the nearby fortification walls and neighbouring Capitole Theatre and RBC Tower. They also covered the tower with stainless steel, a material selected through tests to see what would blend best with Quebec City’s sky.

The tight space also brought acoustic and programmatic challenges. A concrete shell surrounds the main stage and fly tower, with the lobby, foyers, and offices acting as a double skin, dampening the sounds from the busy streets outside. In the office spaces, stepped nooks are used to elegantly resolve differences in floor levels resulting from the adaptive reuse. These nooks offer quieter, secluded views towards the western half of Place d’Youville. The sculptural main stair, along with a strategic use of mirrors and transparent elements, helps create a dynamic environment despite the spatial constraints. A glass wall between the lobby and a restaurant on the ground floor of the former YMCA (independently managed and designed by another team) ensures a visual connection with the lively restaurant and Place d’Youville beyond. The washrooms are all-gender, a decision that derived both from the limited floor plate and a desire to make the venue more accessible.

Le Diamant’s most striking features come from the client’s and architects’ shared interest in the memory of place. Many elements are imagined as “ghosts” of past buildings—historical layers that hover over or under the contemporary building. At the entrance, artist Claudie Gagnon’s glass sculpture, titled Atome ou le fruit des étoiles, reimagines the much-loved Cinéma de Paris sign that had hung in that location since 1948. The client had initially wanted to restore the sign, but a 2007 fire had rendered it too delicate to retain. The ground floor lobby incorporates art deco lighting and other elements from the old theatre.

On the mostly opaque stage-side façade, fronting Des Glacis Steet, the architects photo-engraved concrete panels with a full-scale reproduction of drawings for an unbuilt YMCA addition. The images were taken from original drawings by Joseph Ferdinand Peachy, the architect of the main YMCA building, built in 1879. (An addition was completed in 1898, but not as Peachy had designed it. In 1947, it was demolished and replaced by the Cinéma de Paris and a restaurant.) The subtle photo-engraving process—playing with light and shadows to allude to the use of optical illusions in theatrical performances—is quite impactful at night, but is unfortunately too subtle at other times of the day.

To this reviewer, the new-build portion of Le Diamant still feels heavy and disparate compared to the existing façade, but the ghost-like graphic adds a touch of urban drama for passengers boarding buses at the nearby interchange. The gesture continues inside the main performance space, which is ringed by black walls that reproduce the arched openings of the YMCA façade, adding a sense of monumentality to the otherwise unadorned, transformable space.

The second-floor foyer—mostly situated within the footprint of the old YMCA—evokes the building’s past in a particularly inventive way. The space integrates cast-iron columns, found in the basement during construction, and reuses wood framing from the old structure. The partitions were rebuilt as they were found, already stripped of their plaster. These elements are treated like stage décor, with scant connection to the new construction or to the architectural treatment on other floors. Coffered ceilings and the patterning of the wood floor mimic the former room divisions. Arched shear walls and backing for the exterior walls, both originally made of brick, have been replaced with bare concrete walls. The resulting foyer feels open and vast enough for a cultural venue, while also offering smaller, more intimate spaces for conversation.

Le Diamant successfully builds on and contributes to its context on two levels. From afar, the transparency of the atrium highlights the theatre’s buzz of activity, and adds to the life of Place d’Youville. From up close, the building reveals traces of the past, playfully highlighting the experience of memory in a way that goes beyond mere façadism. Whereas the Caserne Dalhousie alluded to theatre traditions by replicating elements of the historic façade as if it was a stage set, Le Diamant invites visitors to explore its different spaces and imagine its past through intriguing clues. Just as Lepage masterfully transforms everyday objects into unforgettable stories, Le Diamant excavates through layers of spatial memory, bringing sparkling treasure to light.