If you look at the elbow-shaped island of Montreal from above, you’ll see several large swaths of green: nature reserves along the edges, Mount Royal Park at the centre of the island, the botanical gardens next to the Olympic Stadium, several golf courses.

Then there’s a pale green rectangle towards the inner crook of the elbow, not far from downtown. It’s a not-quite-yet park—a former quarry, later turned garbage dump, that is slowly being covered over with green. Once the rehabilitation is complete in 2023, the 153-hectare Saint-Michel Environmental Complex Park will be the city’s second largest, after Mount Royal. The lowest part of the quarry will be transformed into a lake, surrounded by wooded areas, pathways, an outdoor theatre and sports fields. Below the surface, biogas emitted by the buried garbage will continue to be collected and used as fuel.

Meanwhile, at the border of the park, an impressive component of the overall plan has already been completed. The Saint-Michel soccer complex, by Saucier+Perrotte Architectes with HCMA Architecture + Design, is inspired by the massive man-made topography of the former quarry. “For me, Mount Royal is convex, while Saint-Michel Park is concave. It’s like the yin and yang of the park situation in Montreal,” explains lead architect Gilles Saucier, FIRAC, whose team won the commission following a two-stage design competition. Conceptually, the project is a “simple plate of ground” that delaminates up from the rim of the quarry, reaching towards the higher topography at the centre of the island.

The building contains two soccer fields—one indoors, sheltered by a mass timber roof, and one outdoors. The outdoor field is framed by arm-like extensions of the roof, which transform into gates and bleachers to embrace the sides of the field in a giant hug. Between the two soccer pitches, the structure’s shoulders arch over the two ends of a new public plaza, a future gateway to the park.

Soccer is a fitting program for one of Montreal’s most ethnically diverse neighbourhoods. Requiring only a ball and a patch of ground, it’s perhaps the most international of sports, and is far more accessible than the province’s beloved hockey. “As a pavilion in the park, the centre presents a new place for different cultures to meet, through the common link of sports,” says Saucier. “Every nationality is together in the building.”

Inside, the symbol of unity is the project’s striking roof: a dynamic lattice in mass timber, manufactured by Nordic Structures, that spans the 68-metre-wide field and bleachers. The system’s primary beams are four-metre-high box constructions, which appear monolithic, but are actually made of glulam top and bottom chords with cross-laminated timber webs. Solid, one-metre-high secondary and smaller tertiary members contribute to cross bracing.

Instead of a regular grid, the members are laid on 14-degree angles to generate a pattern of seemingly random diagonals. The visual confusion is deliberate. “It completely shifts your perception,” says Saucier. The lines create an unexpected sense of spaciousness, evoking the paths taken by soccer balls kicked and passed across the field below.

All of the project’s other spaces—offices, concessions, change rooms, classrooms, service spaces—are arrayed along a spine to the west. This side of the building is tucked into a two-storey berm that shields the site from busy Papineau Avenue; rooms that require daylight pop outward like glass boxes atop the slope.

The massing strategy allows the quarry-facing side of the project to be opened up entirely to the landscape, over which a glazed façade provides stunning views. The façade is shielded by an exterior overhang and masked by an 80-percent frit pattern that protects the pitch from glare, yet still manages to feel light and airy. “Achieving a high level of daylighting while ensuring playability was a key issue from a technical standpoint,” says Darryl Condon, FRAIC, of HCMA. “We all thrive under natural light, particularly in our climate.”

Outside, standing-seam zinc cladding covers the building. A syncopated rhythm of vertical striations was created using three widths of pre-fabricated panels. The cladding accentuates the faceted shape of the volume, while making reference to the dynamite blasting lines in the quarry’s exposed rock face.

With large-scale buildings driven by a single concept, certain details assume an enormous importance. Saucier is astute with material selection. “When working mostly with black, white, grey and accents, controlling the colours is very important,” he says. “If you do not take care, it can become boring.” The soccer centre’s colours are anything but: Saucier picked a warm grey for the exterior cladding, which is a fitting pairing with the exposed wood under the eaves. The interior is enlivened with translucent burnt orange panels at the entrance, and a spectrum of colours on the change room doors that shifts gradually from lemon yellow to lime green.

Above the field, fluorescent lighting is neatly aligned to the roof members. Other systems, including HVAC and sprinkler lines, follow their own grid. This was deliberate, although incorporating these elements into the wood structural system could have added further to the elegance of the composition.

At present, the project feels massive—a soccer pitch is a big surface area, especially when framed with a flat roof. However, this largeness will be mediated as vegetation grows in on the western berm. More importantly, the scale is designed to feel right from the vantage point of the quarry park, where the project will be most often seen as a sculptural object—rather than from the pathway directly alongside the centre, or from Papineau Avenue.

Ultimately, the scale delivers where it counts. Inside, the monumental roof creates a grand venue for the game of soccer. It might not be the coziest place for a game of weekday pickup—a neighbourhood park with doffed jackets as goalposts will always be better for that—but for a faceoff between rival schools, or a weekend tournament between semi-pro teams, the Saint-Michel Soccer Centre will be the place to be. “Kids are so excited to play here,” says Saucier. The grandeur of the pitches are enough to make any player, young or old, feel like a soccer star. 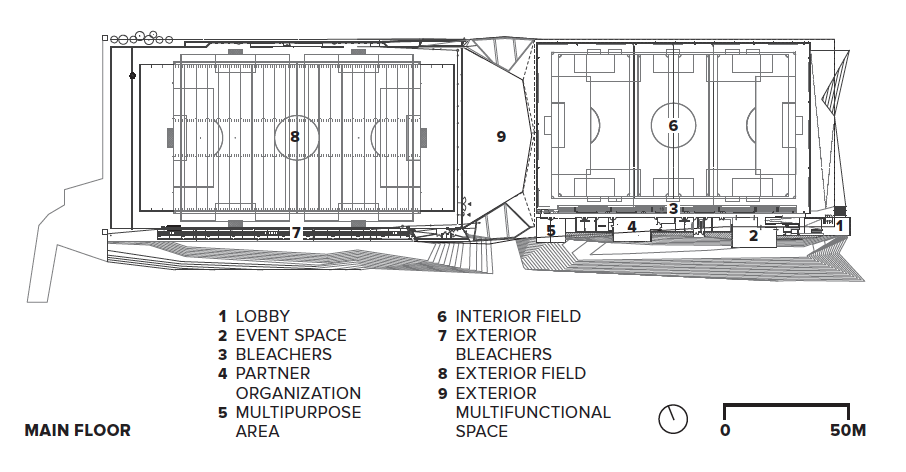