Škola Smíchov will be the first new urban public school built in central Prague in nearly a century. The new building will accommodate 540 students aged 6 to 14. It is located within the ambitious Sm’chov City redevelopment, which aims to transform 50 acres of former railway lands into a mixed-use community that prioritizes green space, walkability, and a fine-grained urban fabric. 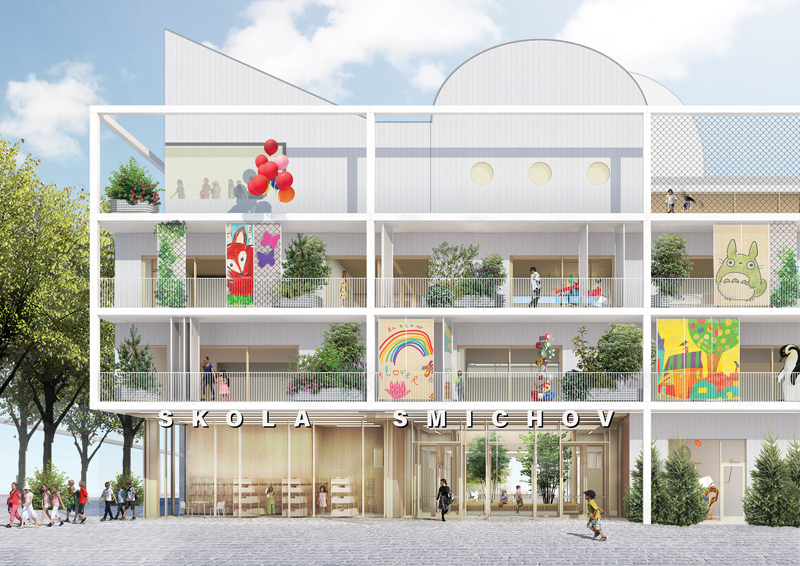 The school’s design is guided by the idea of fostering social and environmental stewardship in students, at a scale that expands as they grow: learning to take care of themselves, of their classmates, of the school community, and finally of the wider urban community and natural world. The building supports this by offering opportunities to engage with the city and with nature, so that students can see themselves as part of a larger community and find connections between classroom learning and the outside world. 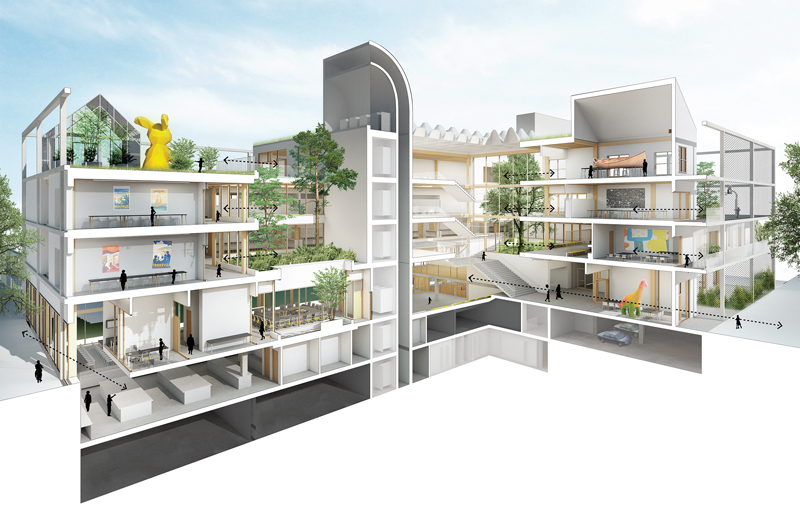 The building is conceived as a simple gridded framework, populated by classrooms, gyms, offices, terraces and gardens. This logic creates a miniature city for children to explore and care for. Constructed from glulam timber, the frame formally unifies the building while allowing the diversity and individuality of its program elements to flourish.

Individual classrooms are clearly legible within the grid and include balconies that invite public display of student work. Plantings and movable screens shield the classroom windows from solar gain, while summertime passive ventilation and night purging is supported by clerestory windows between every classroom and the corridors, and mechanically controlled vents from the corridors to the courtyards. 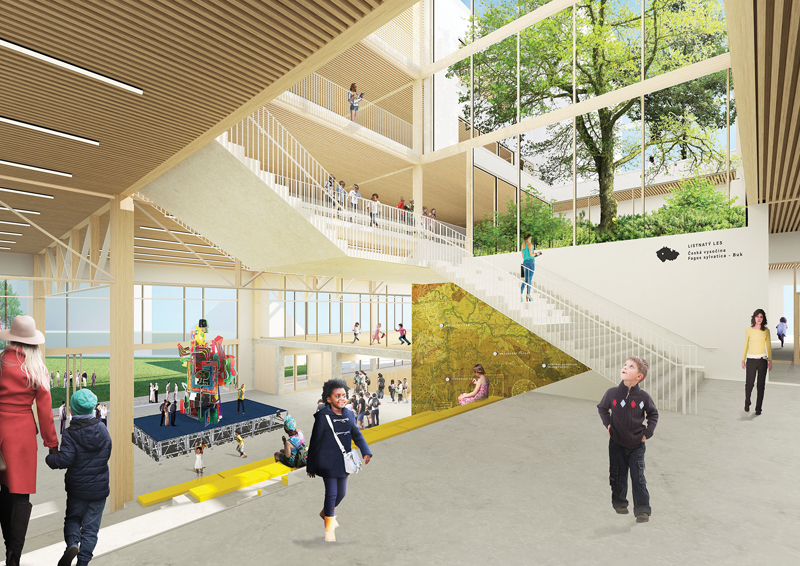 Internally, the school is organized around a central atrium, with a stair that connects all floors and lands at the main hall—the central gathering space for the school community. The ground and lower level contain the major shared spaces, including the cafeteria, gyms and club rooms. Level 1 is reserved for younger students, Level 2  is for older students, and Level 3 contains specialty classrooms, each with its own quietly whimsical roof shape. Rooftop terraces and courtyards provide secure play spaces and gardening areas, and bring light deep into the building. 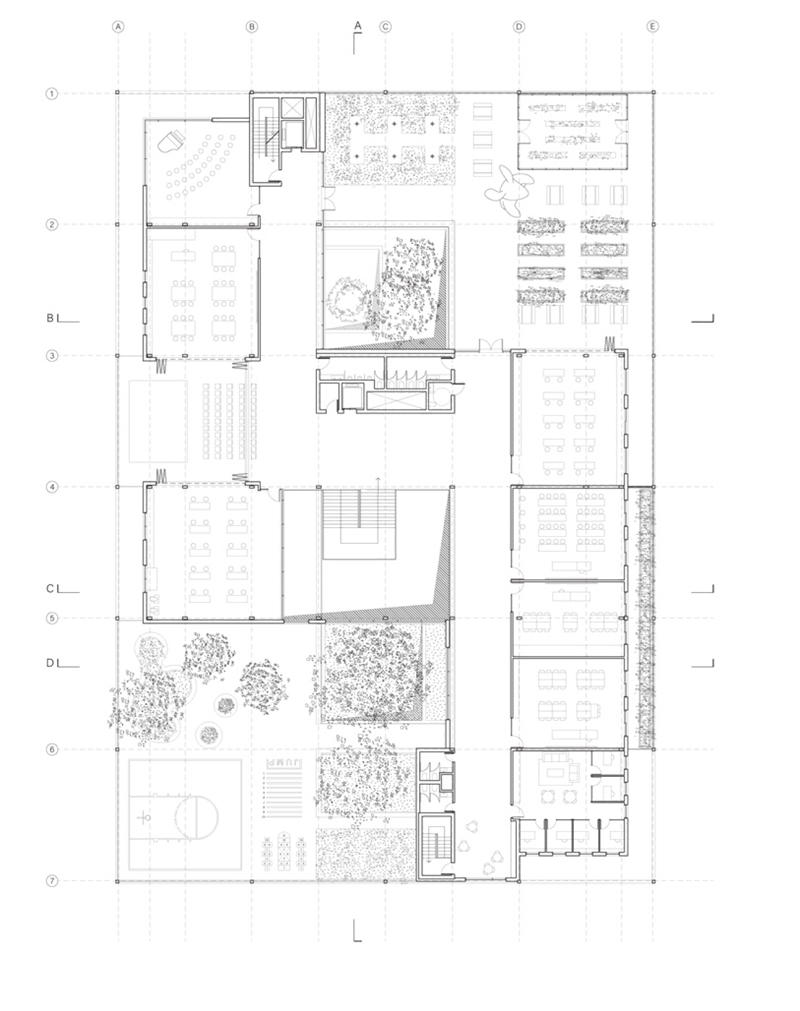 At the site level, the building forms an urban edge to the neighbourhood’s principal boulevard, where the main entry is located, along with amenity spaces open for community use after school hours. To the east, a playing field steps down to a public park, and the groundskeeper’s house looks over the vehicle drop-off and secondary entrance. 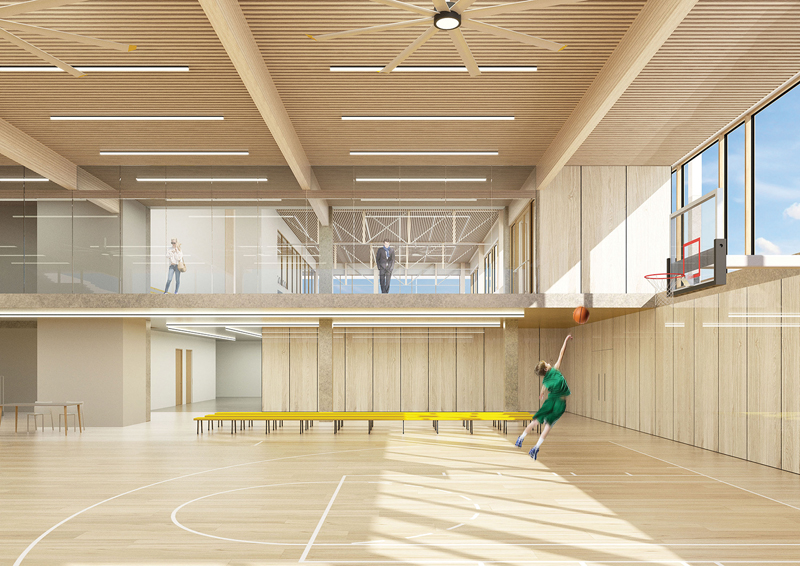 The structural system is a hybrid of mass timber and concrete, combining the aesthetic and environmental qualities of wood with concrete’s thermal mass, structural performance and fire safety. With the exception of the basement levels, the majority of the building is based on pre-fabrication and ‘dry’ construction methods, and components are sized for truck transport.

The entire building speaks of its internal life, encouraging children to see kola Sm’chov as their school, home and community.

Monica Adair :: The importance of play carries through the expression of the building and how you move through the project. The classrooms turn almost inside-out and become a way to celebrate the lively program that’s inside. It encompasses the spirit of being a kids’ school, and its delivery doesn’t seem to over-coddle the students.

Ted Watson :: There’s a levity but also a rigour to this project. It’s extremely elegant in its solution. The plan is loaded with surprises and delights, delivering a maximum amount of joy, light, and access to nature within a rigorous framework. It has terraced courtyards that bring outdoor garden space to each level. Governments, school boards, and taxpayers across Canada should take note of how other countries cherish these buildings as important places for children to learn and engage with the world.

David Penner :: I was struck by the lightness of the frame and the freedom that it implies: freedom that is often held down or that feels restricted in Canadian schools. It’s a building that teaches kids to live in the world.