The Google affiliate revealed Thursday that is walking away from its controversial, smart city plans after spending years and millions of dollars on the proposal.

”As unprecedented economic uncertainty has set in around the world and in the Toronto real estate market, it has become too difficult to make the 12-acre 1/8nearly five-hectare 3/8 project financially viable without sacrificing core parts of the plan we had developed,” Sidewalk’s CEO Dan Doctoroff said in a letter posted online that broke the news.

Our decision not to pursue the Quayside project was a very difficult one. We are grateful to the countless Torontonians who contributed to the effort, and for the support we received from community groups, civic leaders, & local residents. Thank you https://t.co/OiCDzMJvDk (1/3) https://t.co/XBLVgZd0Xs

Some of the things we’re working on include factory-made mass timber construction, a digital master-planning tool that can improve quality of life outcomes and project economics, and a new approach to all-electric neighborhoods. The future of cities is bright. (3/3)

The day before, he had informed Waterfront Toronto, a tripartite agency in the process of deciding whether to allow Sidewalk to pursue the plan, of the decision.

”While this is not the outcome we had hoped for, Waterfront Toronto offers thanks…to Sidewalk Labs for its vision, effort, and the many commitments that both the company and its employees have made to the future of Toronto,” Waterfront chairman Stephen Diamond said in a release. 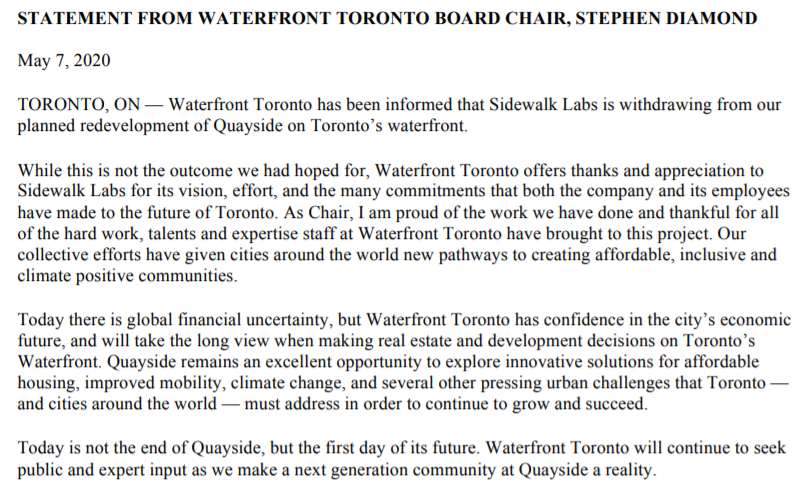 The decision signalled an end to the rocky relationship between Sidewalk and Waterfront that has festered for years as the project was met with criticism around privacy protections and intellectual property concerns from business leaders and security experts alike.

It all began in 2017, after Sidewalk won the right to develop a proposal for the swath of lakefront land from Waterfront that was underdeveloped and underserved by transit and other key city amenities.

Critics instantly complained about a multibillion-dollar, American corporation creeping into the country and getting its hands on prime land that could have been developed by homegrown enterprises. They worried about what would happen with data collected form a myriad of sensors and devices throughout the neighbourhood.

Doctoroff and Sidewalk kept forging on and in June 2018 unveiled a 1,500-page plan showing Sidewalk was willing to spend $1.3 billion on the neighbourhood.

It would adorn it with ”raincoats for buildings” that can provide cover or be opened with better weather, and heated and illuminated sidewalks, which it built prototypes of at its Lakeshore Boulevard office that employed 30 people.

Affordable housing, tall timber structures and innovations to support sustainability and environmentalism would be part of the neighbourhood too.

Instead of the nearly five hectares, most believed Sidewalk was working on a proposal that spanned 77 hectares – 16 times the original size.

Diamond and Waterfront weren’t happy. By October, they had convinced Sidewalk and Doctoroff to scale back and refine their approach to five hectares.

Sidewalk also agreed to store and process data collected from the project in Canada, pay fair market value for the land at the time of sale, team up with one or more real estate partners and allow Canadian companies to use Sidewalk’s hardware and software patents.

If the smaller project was successful, Waterfront said Sidewalk could seek to develop more land, but a formal process would need to take place.

Since that October decision, Waterfront had been weighing Sidewalk’s proposal and was meant to decide in March whether the project should move forward. COVID-19 pushed that decision back to May and even if Waterfront had given Sidewalk a green light, municipal, provincial and federal approvals would have been needed before any shovel hit soil.

Though without its tech giant partner and amid a pandemic, Waterfront still seems to want to revitalize the area.

”Quayside remains an excellent opportunity to explore innovative solutions for affordable housing, improved mobility, climate change, and several other pressing urban challenges that Toronto – and cities around the world – must address in order to continue to grow and succeed,” Diamond said in his release.

”Today is not the end of Quayside, but the first day of its future. Waterfront Toronto will continue to seek public and expert input as we make a next generation community at Quayside a reality.”

Toronto Mayor John Tory echoed those sentiments, saying the decision had not changed his mind about their being a ”tremendous” opportunity to develop the area.

”I am extremely confident there are partners eager to undertake this endeavour,” he said in a release.

”Our goal remains to ultimately build a neighbourhood focused on innovation in Quayside that will be the envy of cities around the world and a beacon for the future.” 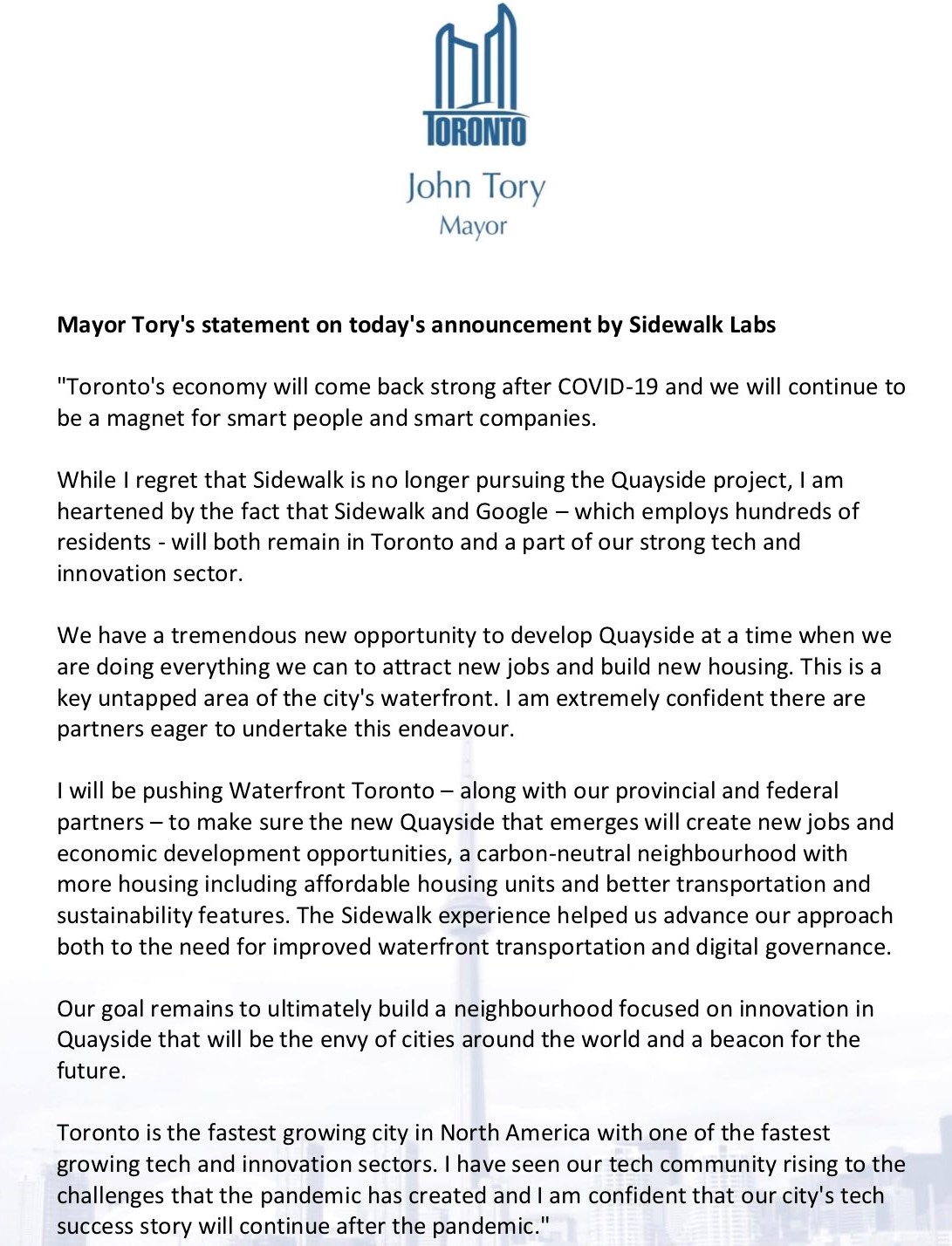 This report by The Canadian Press was first published May 7, 2020.