In late 2014, the webzine urbantoronto.ca was humming with speculation over who might occupy the retail site located diagonally across from Dundas Square on the west side of Yonge Street. Previous flagship retailers hadn’t fared well in this location: Sears had closed its doors in the first few months 2014, just as the Eaton’s department store had folded 15 years earlier. The soaring glass atrium—once the forecourt to Eaton’s—had been parcelled into smaller, leasable retail spaces by property-owner Cadillac-Fairview. Fast-fashion retailers H&M and Uniqlo were already new tenants.

What high-performing global brand would anchor in their midst? Plans for the empty space posted by Retailer Insider, an online publication, simply read “mystery retailer.” Bets were on Apple. Instead, Samsung—Apple’s primary competitor—secured the coveted spot. 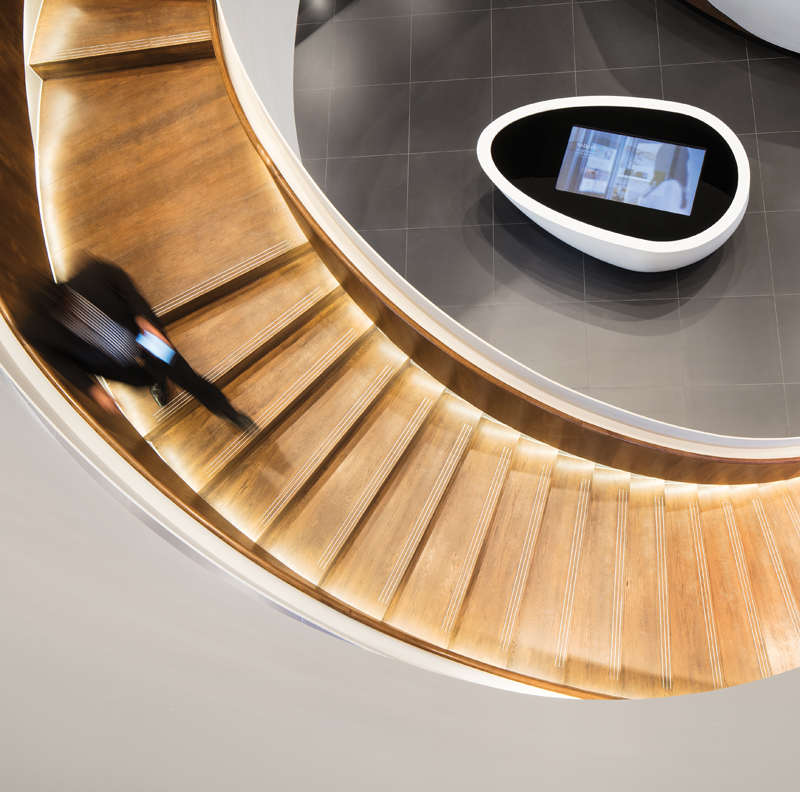 The Samsung Experience Store now stands where a statue of Timothy Eaton once held court. Designed by Toronto-based Quadrangle, the store is the first thing commuters and shoppers see when they rise to street level from the subway concourse and food courts below. Its façade is distinguished by a black steel ribbon that cuts around the front doors and bends at the corners of a glass wall. Inside, the dark ribbon continues, undulating around single- and double-storey windows that face the bank of descending escalators and central circulation corridor.

Samsung has opted for the digitally driven design vocabulary of parametricism, in high contrast to Apple’s minimalist gospel of neat rows of display tables and uniform lighting. The interior is roomy and inviting. The layout is loose, the walls are curved and the arrangement induces meandering. Limited-edition phone cases are suspended in illuminated vitrines like precious artifacts in an area called the “Personalization Zone.” Elsewhere, handheld electronics are tethered to beveled countertops made out of Staron, an acrylic polymer similar to Corian that had been developed by Samsung Chemicals (a divison of the parent company that was sold off in 2015). A large touchscreen hovers under a piece  of glass that cuts across an ovoid volume made out of the same solid surfacing material. Where there is Staron, there are Samsung electronics. The surrounding walls and floor recede into the background with muted shades of brown and gray.

The sombre tones draw one’s eye to Quadrangle’s standout design move—a generous flight of stairs that follows an arc up to a newly constructed second floor. The white balustrade unfurls in what looks like a single curvilinear piece of seamless metal. According to Quadrangle’s design director and project leader, George Foussia, seven half-inch-thick steel pieces were shaped off-site and welded together in place. It’s a metal version of a calla lily, graceful and light.

The sinuous language is repeated overhead in a series of bulkhead plateaus that hide mechanical ducts and unify the design language. The ceiling plan, complete with curved linear diffusers and swooping stepped forms, is the result of Quadrangle’s highly successful collaboration with Alula Lighting Design.

Because the goods available for purchase are scattered throughout the store, visitors are pooled in some places while the rest of the floor is open. In the words of David Moisey, a director of retail marketing  at Samsung Electronics, the store offers “permission to be curious.” The design relays the message: Stay a while, stroll about, take a seat.

Yet much like the secrecy leading up to the store’s opening, the welcoming tone belies another curiosity. According to Moisey, there are 127 stores that sell Samsung phones within a half-kilometre of Yonge and Dundas. Samsung does not need this retail space to make point-of-sales purchases. The site’s inherent value is the large volume of people who pass by hourly. What is on offer are sightlines into an affable setting and, once inside, a preview to what a fully-integrated Samsung lifestyle might look like.

This “experience” is especially showcased on the second floor where couches, arm chairs and coffee tables are staged to look like residential interiors. There are stacks of books and empty vases on low credenzas. Customized area rugs suggest smaller domestic territories from which to watch a bank of monitors in the “TV Zone.” The interconnectivity of one’s smartwatch to one’s refrigerator is still a novel idea, as is the act of putting on a VR headset, but consumers seem willing to play along. Even if visitors do not buy anything, they are encouraged to at least buy into the thinking that integrated smart-home devices are desirable.

Clusters of display gadgets and a functioning kitchen staged with Samsung appliances are just the visible part of the experiential efforts however. The store has its own curated soundscape, heavy on K-Pop and burbling electronica, and its own aroma, called “Galaxy Scent,” which wafts through an integrated scent-dispersal system. Less noticeably, surveillance strategies including wifi hotspots and heat sensors that track and record each visitor’s “dwell time.”

The integration of invisible systems into the build-out calls to mind another dynamism at play. The client, Samsung Canada, operates under the umbrella of a much larger parent company whose size and diversity reveals the full branding potential of this project. Samsung Electronics is profitable on its own but is also part of a wider universe of conglomerated interests. When Samsung was founded in 1938, the company first sold noodles, sugar and wool. By the late 1950s, it had expanded into the insurance, securities and retail markets in South Korea, and by mid ’80s it was selling computers internationally. Today Samsung is the most versatile company in modern history. The parent company makes enormous profits from its Galaxy phones but also from hotels, biopharmaceuticals, financial services, advertising, construction, renewable energy and much else. For example, Samsung owns the construction company that built the Petronas Towers in Malaysia as well as the 163-storey Burj Khalifa in the United Arab Emirates. Another branch of the business, Samsung Techwin, specializes in surveillance and weapons technology.

The Samsung Experience Store reveals nothing about the breadth of “experiences” that the company deals in, but instead reads as a giant architectural advertisement for what we should be doing with our leisure time. In other words, the store reduces the many meanings of the word “experience,” which typically refers to feelings both bad and good, to mean one thing: the pleasures of a holistically branded environment.

This is an increasingly common marketing refrain these days. When Saks Fifth Avenue moved to Toronto, for example, the company president described the store to a local newspaper as “more than just things. Saks is a dream. Saks is a feeling.” Yes—but as with Samsung, the ambition is still to sell things. Where retail environments elsewhere compel visitors to open their wallets immediately, this kind of approach harnesses a designers’ expertise and care into making aspirational stagecraft. The environment does not convince you to buy a phone and get out, but rather that the Samsung world is a wonderful place to reside.

The interactive performative stage is set in a wash of low, warm light. Residential vignettes, including a working kitchen, suggest hospitality and no doubt assists with promoting online sales and the corporate image. Yet as one moves to the back of house, to the second floor boardroom and further still to the storage and service areas, the blousy aesthetic vanishes and orthogonality returns. Here we find the real kitchen, the one actually used by event caterers. Ironically, it has no Samsung appliances in it.

But for the store’s potential consumers, however, especially those nestled in recliners and equipped with VR gear, what is happening behind the scenes seems very far from their minds. They look at ease: comfortable and entertained—exactly as the designers had intended.

Chloe Town is a lecturer at the Daniels Faculty of Architecture, Landscape, and Design. She also teaches in the department of architecture at The University of Waterloo.