Modern Architecture and the Lifeworld: Essays in Honor of Kenneth Frampton

For several generations of architects worldwide, the figure of architectural critic and historian Kenneth Frampton looms large. According to architecture professor Mary McLeod, he is “arguably the most influential architectural historian since Sigfried Gideon.” Frampton has been a respected scholar, teacher, and practitioner for five decades; his book Modern Architecture: A Critical History has been translated into thirteen languages and his 1983 essay “Towards a Critical Regionalism” into many more. His wide-ranging interests and generosity towards both architects and colleagues are encapsulated in an oft-quoted quip among architectural researchers—that the definition of a “rare architectural book” is one that doesn’t bear a preface by Frampton.

Frampton’s legacy comes to the fore in a new festschrift, or book of celebratory essays, marking his 90th birthday in 2020. The volume, titled Modern Architecture and the Lifeworld: Essays in Honor of Kenneth Frampton, is edited by architectural professor Karla Cavarra Britton and architect and writer Robert McCarter. Its publication coincides with the release of the fifth edition of Modern Architecture. 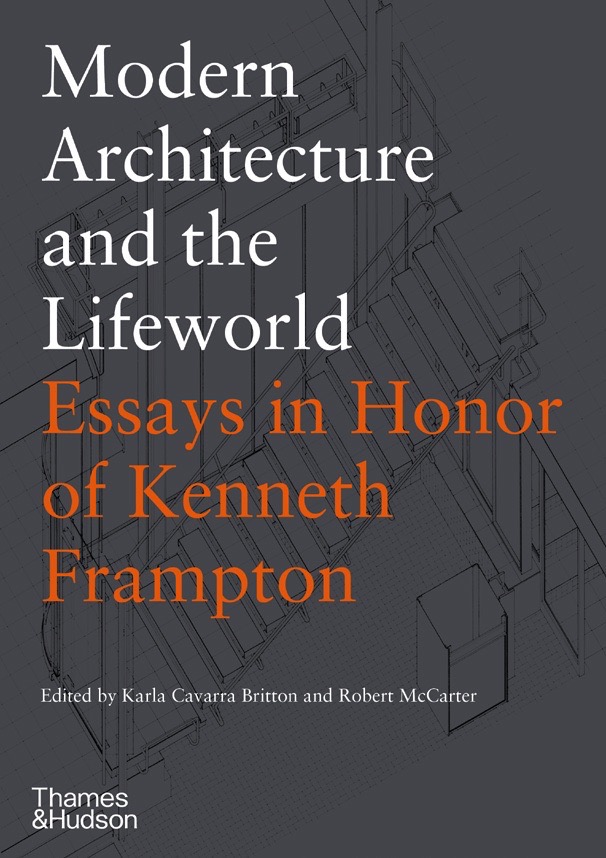 Taken together, the two volumes describe the expansion of Frampton’s scholarship and influence over the decades. Modern Architecture began as a largely European-centred account of the evolution of the Modern Movement in architecture; at 735 pages, the current edition more than doubles the length of the original tome, and includes accounts of Modernism’s manifestation in regions around the world. The expansion is thematic, as well: an afterword entitled “Architecture in the Age of Globalization” addresses issues such as globalized capital, the crisis of housing, and sustainable design. As Frampton remarks, “The impasse of escalating climate change […] is ever more apparent today as we encounter the worldwide crisis of democracy and the accompanying hysteria of populist political reaction.”

In fact, politics were always intertwined with Frampton’s understanding of architecture, as he consistently espoused a humanist, place-based vision of architecture, grounded in his readings of philosophers such as Maurice Merleau-Ponty, Hannah Arendt, and Walter Benjamin. Frampton’s affiliations with the leftist Frankfurt School of political philosophers, and his attempt to square these readings with an interest in architecture’s experiential qualities, is detailed in Mary McLeod’s essay in Modern Architecture and the Lifeworld, entitled “Kenneth Frampton’s Idea of the Critical.”

This confluence comes to the fore in the essay “Towards a Critical Regionalism,” where “[Frampton’s] position seems closer to that of both Habermas and Gramsci, who emphasize culture’s potential as a constructive form countering prevailing ideologies, than to that of Tafuri and Adorno, who seem to accept a darker, more totalizing view of capitalism’s power,” writes McLeod. That essay—with its hopefulness about architecture’s ability to create meaning and to resist the forces of globalization and capitalism—has made an impression on many architects. In Modern Architecture and the Lifeworld, luminaries such as Wang Shu, Steven Holl, Wiel Arets, Marion Weiss, Michael A. Manfredi, and Emilio Ambasz testify to the impact of Frampton’s writings, and especially of “Towards a Critical Regionalism.”

“To understand Frampton’s impact on the field of practice, it is important to reflect on the state of the profession in the late 1970s and early 1980s,” writes Brad Cloepfil, founder of Allied Architecture. He notes how, at that time, international modernism seemed to be coming to an end, the influence of major corporate firms was apparently waning, and a new culture of ‘studio’ architecture was emerging in New York and Los Angeles.
Yet, discourse had been frozen between a view of architecture as a kind of rarified art-from, or as a kind of container for symbolic meaning. “Practitioners and theorists alike were locked in a desperate battle of association and borrowed authority,” writes Cloepfil. Into this atmosphere, Frampton’s concept of critical regionalism, with its emphasis on the material and structural tectonics of architecture, “effectively asserted the very specific language of architecture as the critical cultural pursuit […] The building, the made artifact, can embody and transmit something true about its own construction, and by extension, the cultural forces at work upon it.”

As Yvonne Farrell and Shelley McNamara, co-founders of Grafton Architecture, summarize: “The main thrust of these ‘Six Points for an Architecture of Resistance’ is to make sure that we do not forget the value of our senses, encouraging us to remember our impulse to touch, encourage us as architects to value the totally immersive poetics of construction.” 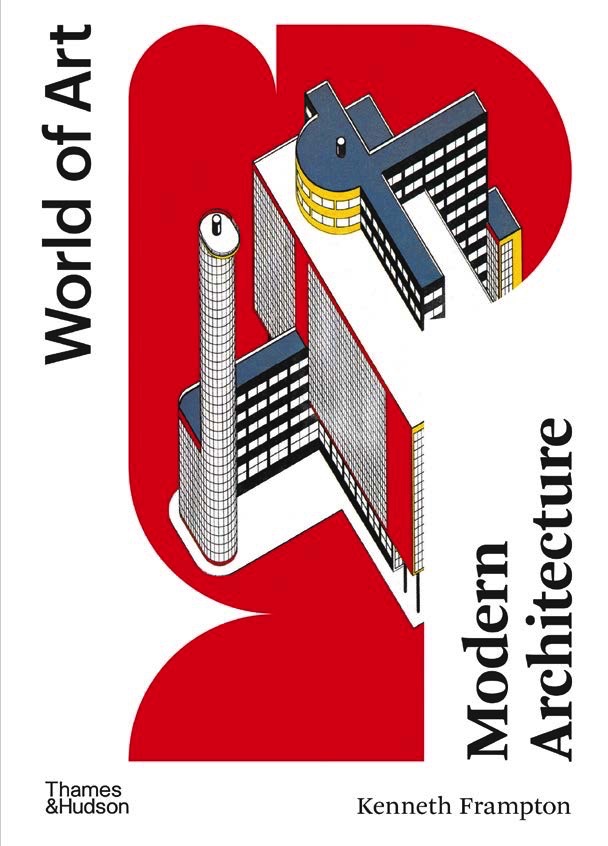 Frampton’s impact has equally been felt in Canada, where the idea of regionally inflected architecture is especially pertinent to a country with immensely varied geography, cultures, and land-based Indigenous and vernacular building practices. Frampton has long cited the work of Brian MacKay-Lyons, Brigitte Shim and Howard Sutcliffe, and John and Patricia Patkau as exemplars of critical regionalism. In the newest edition of Modern Architecture, he extends his assessment of Canada back to the 1960s, citing works in Montreal including Ray Affleck of ARCOP’s Place Bonaventure, Moshe Safdie’s Habitat 67, and Dan Hanganu’s Pointe-à-callière museum. Turning to Toronto, he makes note of Ron Thom’s Massey College, John Andrews’ Scarborough College, and Barton Myers and Jack Diamond’s HUB dormitory at the University of Alberta. In Vancouver, he marks the importance of Erickson’s Simon Fraser University, University of Lethbridge, and Robson Square complex.

Characteristic of Frampton’s writing, this summary of modern Canadian architecture’s highlights is delivered in a compact six pages, including a sprinkling of carefully selected images. Modern Architecture’s fundamental role, Frampton writes, is as a “convenient reference work or textbook.” For someone unfamiliar with a particular subject, it’s best accompanied by illustrated companion texts, and perhaps an internet search engine, close at hand.

For this reader, it was a refreshing to alternate between the compact writing of Modern Architecture and the mix of narrative and academic texts in Modern Architecture and the Lifeworld. Canadian references show up here, too—from Mary McLeod’s opening essay, which mentions the impact of “Towards a Critical Regionalism” on architects and firms including John and Patricia Patkau, to the closing essay, written by Brigitte Shim and Howard Sutcliffe.

Shim and Sutcliffe’s “From the Archives of Kenneth Frampton” is based on a close examination of six documents, selected from Frampton’s archives, which are held at the Canadian Centre for Architecture (CCA) in Montreal. “There, in the light-filled study centre, as we contemplated a very large stack of archival boxes, we fully understood the breadth of Frampton’s insatiable curiosity and prodigious interest in the world and its relationship to architecture and life,” write Shim and Sutcliffe. Their selection of archival objects ranges from Frampton’s sketches of Alvar Aalto’s National Pensioners Institute in Holland, “in which Frampton interrogates […] Aalto’s choice of building materials, examining carefully his construction details and building connections,” to his measured drawings of Pierre Chareau and Bernard Bijvoet’s Maison de Verre in Paris.

Looking at materials from the archive, Shim and Sutcliffe assert that Frampton’s interests in global architecture, as well as the integrated role of landscape, built form and topography in shaping the public realm, are deep rooted. In the Frampton fonds, they discovered a letter from Frampton to Cornelia Oberlander from 1999, asking for an image of Robson Square to use on the cover of a book he was writing on megaform. He didn’t receive the photo he had in mind in time—but eight years later, he delivered a lecture at Harvard’s Graduate School of Design entitled “Megaform as Urban Landscape,” using the photo he eventually received from Oberlander.

One of the most delightful parts of Modern Architecture and the Lifeworld is a succinct tribute to Frampton from Portuguese architect Álvaro Siza:

In space and time a lifelong traveler.

Eyes, ears and voice that find, receive, understand and send—open
to the sharing.

Indeed, Frampton’s life’s work has played no small part in nurturing a critical understanding of modern and contemporary architecture today—as well as pointing towards architecture’s continued transformative potential for the future.