Turning off Keele Street, just minutes north from the commotion of Toronto’s busy Highway 401, the city retreats. It is quiet, calm. The expansive grass fields and unobstructed sky views of the former Downsview Airport are a fitting landscape for a new aviation hub.

Centennial College’s facility for Aviation and Engineering Technology & Applied Science, designed by MJMA and Stantec with ERA as Heritage Architects, is an adaptive reuse project situated within the geographic heart of Canadian aviation history. The school proudly occupies one of the most significant of several sprawling aircraft buildings that flank the lengthy Downsview runway. The historic de Havilland of Canada building is the oldest surviving aircraft factory in Canada; it’s where nearly 3,000 Tiger Moth aircraft and some 1,134 Mosquito bombers were built; where the company developed the Twin Otter and Dash-8; and where the first Canadian satellite, Alouette I, was assembled. After the plant’s closure, the hangar was used by CFB Toronto, and later served as an air and space museum before being mothballed in 2011.

By the time Centennial College acquired the facility, the 1929 building had preserved its additions from 1937, 1939, 1940, and 1944, but was slowly falling into disrepair. Through selective demolition and addition, the designers undertook the challenge of uniting the complex, while respecting its original fabric and rich history. Today, it welcomes a new generation of aviation technicians-in-training.

A glass overhang stretches along the property’s entrance off Carl Hall Road. This element frames the restored masonry of the 1939 and 1940 façades and builds on a tradition of bold civic entrances. Cantilevered at either end, the canopy refers to an acrobatic aeroplane wing. A wall adorned with historic images creates an exterior public gallery, and the backdrop to an appealing barrier-free ramp. This welcoming gesture—one of just a few bold architectural moves within the project—sets the tone of the design as a strategic refurbishment, which takes its cues from the history of the building. 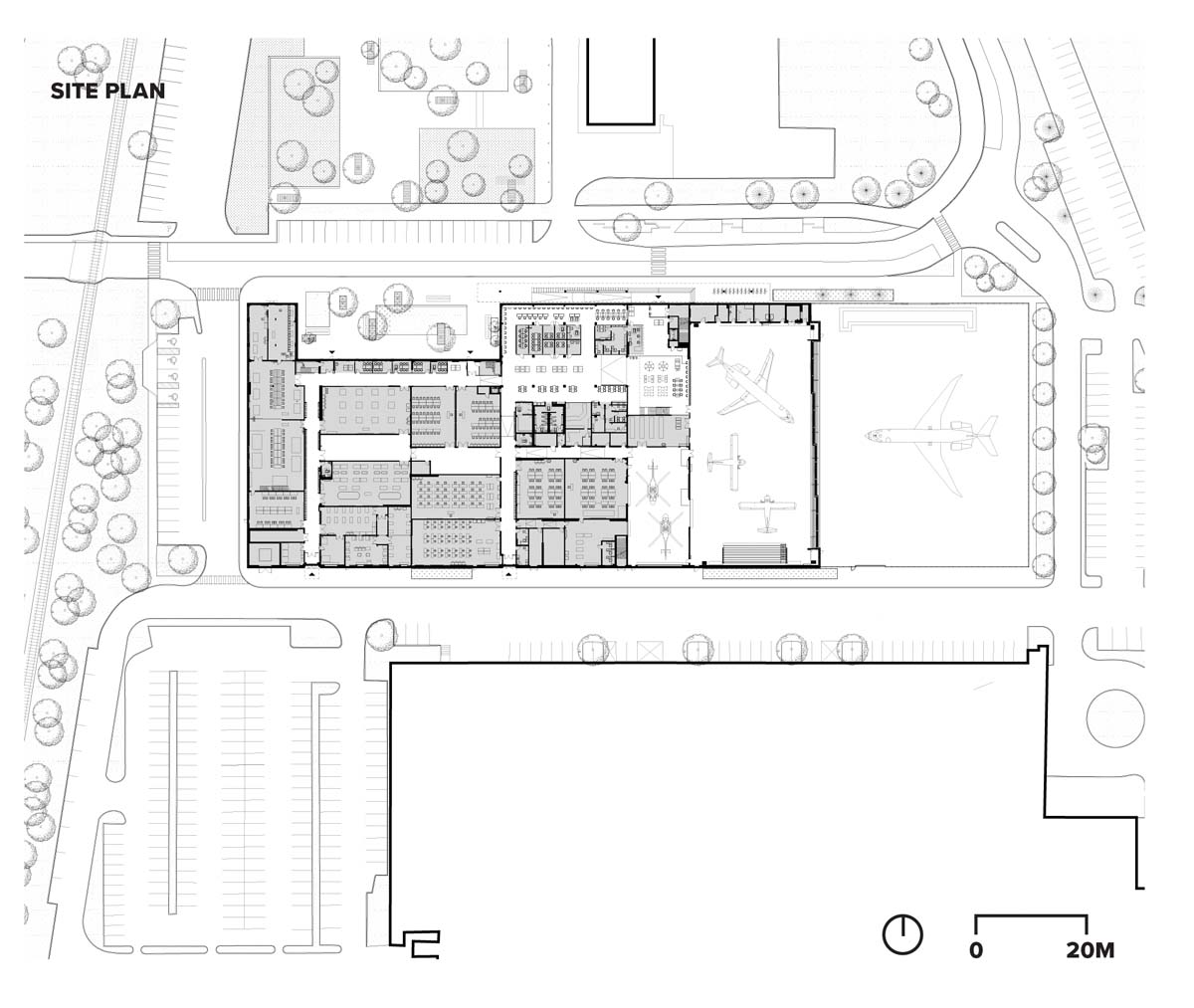 “The site had a clear story to tell,” says MJMA principal Robert Allen, explaining that the ambition of the team was to reveal that story as clearly as possible. Stephen Philips, senior vice president at Stantec, adds that “patience, patience, patience” was key to achieving this goal. The two firms worked closely together to develop an architectural strategy that preserved and made highest use of the building’s existing fabric, including its large open spaces.

One such space is a former double-height warehouse area, which has become the Student Commons, just inside the main entrance. Here, varied aspects of student life converge with informal gathering areas, food vendors, and study rooms. Tall ceilings and clerestory windows contribute to a sense of openness, despite a compact layout. Imprinted into the terrazzo floor of the Commons is an oversized windrose—a reminder of how the site’s unique wind patterns shaped the airport’s runway configuration, along with the de Havilland building’s placement and orientation. 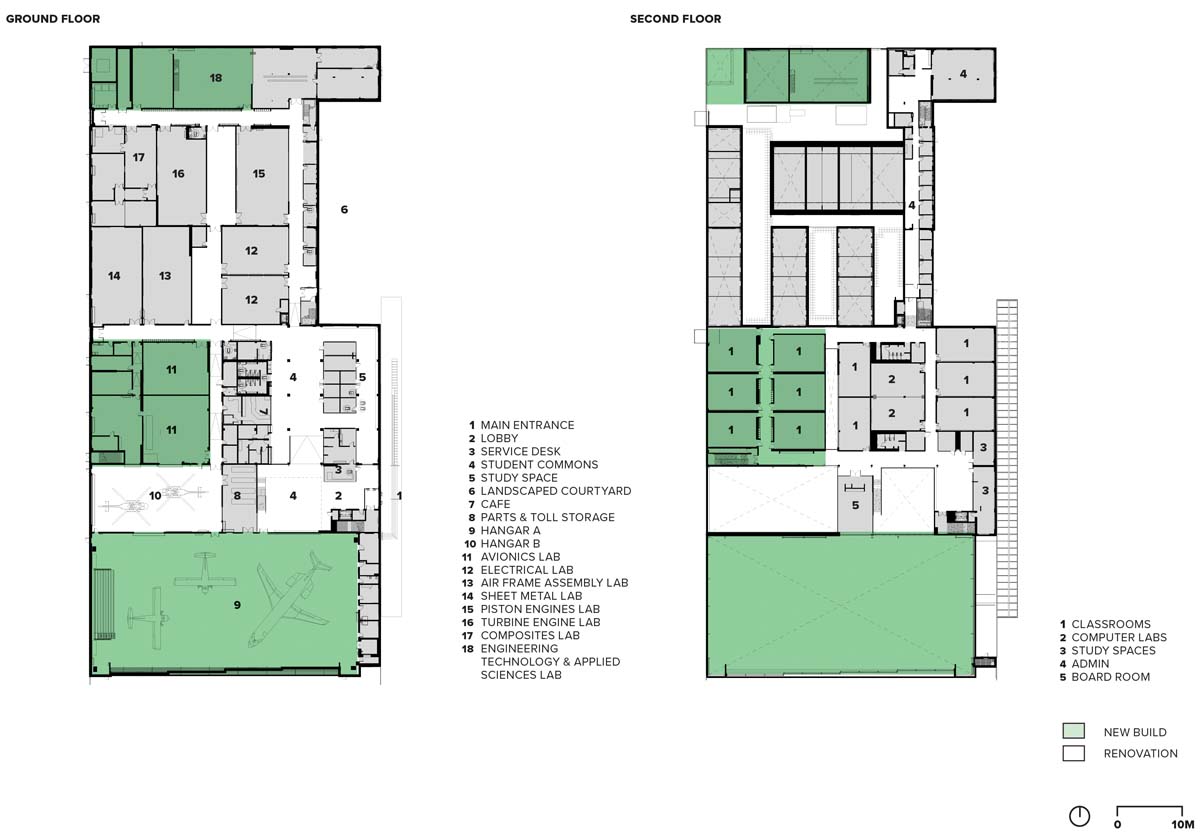 The Commons is surrounded by program on all sides, including a two-storey glass partition that looks into the building’s most dramatic space—a cathedral-like, 2,600-square-metre hangar, complete with a 28-meter-wide bridge crane capable of lifting 3,000 kg. In this case, new construction was necessary, as the historic hangars were too small to accommodate the wingspans of the commercial aircraft that students are learning to service. Like the grace of a heavy aircraft taking off, the hangar appears to hover effortlessly above its concrete floor. An ambitious structural design leaves its glass enclosure appearing weightless. Despite the hangar’s program as a functional classroom, it has been conceived with thought and care—replace the Cessna Citation II commuter jet and Bell 206 helicopter with Richard Serra sculptures, and it could easily be the show-stopping atrium of a contemporary art gallery.

An equal thoughtfulness is evident through the project. The team from MJMA, Stantec, and ERA was careful to balance between narrating the building’s historic significance while creating architecture for daily use: after all, the building is now a teaching facility, not an aviation museum. Throughout the facility, glazed interior partitions connect common areas and circulation zones with meeting rooms, classrooms, and labs. This allows the structural bones of the heritage architecture to enjoy a continuous presence throughout, while also putting the contemporary teaching artifacts on display, including impressively ornate, elephant-sized engines. Existing walls were stripped to reveal restored masonry, while new walls were embellished with aeronautics-themed infographics. Fittingly, the building’s high-performing mechanical systems are exposed throughout.

Following an old aviation tradition, the building’s green roof bears the name of the College—today visible by pilots and passengers, as well as Google map viewers. Classrooms at the building’s centre are given sky views through clerestory windows. While several of the lab spaces are double-height, the 1939 portion of the building is topped by a second level, housing additional classrooms and computer labs. In the upper storey space, an informal study zone overlooks the Student Commons below, while a glass-enclosed boardroom also enjoys views over the two teaching hangars—its sightlines similar to those of an air traffic control tower.

MJMA, Stantec, and ERA have brilliantly brought themes out of the existing elements, while skillfully adding their own mark. The result is thoughtfully executed architecture that reads lightly. Centennial College’s Centre for Aerospace and Aviation at Downsview inspires a new generation of aviation experts while demonstrating that, for architects embarking on adaptive reuse projects, the sky is the limit.

Aidan Mitchelmore is a Toronto-based Intern Architect who has a passion for architecture and public buildings.