For Aesop, small spaces warrant big investment. Established in Melbourne in 1987, the high-end brand of skin care products opened its first boutique there in 2004. Aesop doesn’t advertise or offer product discounts; instead, it’s made its name as an aficionado of design. It showcases its unique approach to retail architecture with stores in the world’s most coveted shopping destinations, and in its online archive of their creation, Taxonomy of Design. Working with Montreal-based Alain Carle Architecte, Aesop opened its first signature store in Canada’s cultural capital last winter, in the affluent neighbourhood of Westmount.

Best known for his portfolio of award-winning private residences peppered across Quebec’s countryside, Carle seems an unlikely candidate for this small-scale urban, commercial venture. And yet, both Carle and Aesop share a similar approach to place, finding inspiration in local conditions through in-depth investigation and reflection.

For Aesop Westmount, Carle wove together a conceptual narrative for the store’s interior that draws on water’s prominence in the local landscape and industry, and on its use as a tool for cleansing and contemplation. Historically, Westmount’s development was bound to the waterways surrounding the island of Montreal; in the current post-industrial era, water is more closely linked to recreation and leisure, and is celebrated as a symbol of intimacy and rejuvenation. Using this research as a stepping-stone, Carle creates an experience in the store that is much more tactile than cerebral.

Customers enter the slim rectangular volume of the store from a small recess directly off busy Sherbrooke Street. Once inside, the room unfolds like an abstract winter landscape. The journey begins along the west wall through a dim, darkened space framed by floor-to-ceiling antique black glass. Like deep water in winter, the murky surface obscures its depths, recording instead patrons’ subtle silhouettes set against the store interior. A video installation by local artist Pascal Grandmaison integrated into the wall opposite the entry sets a calming tone, with a hypnotizing short film of water droplets flowing between two hands.

Travelling across the room, customers “come to shore” with a slight step up onto a plank wood floor, reminiscent of floating logging booms or a timber pier suspended above the river. Simultaneously, the ceiling steps down slightly, like a heavy sky hanging low over icy mountain peaks. The space, brightened by snow-like surfaces of white marmorino stucco and indirect lighting, focuses attention on two large wall niches where Aesop’s simply, yet elegantly packaged product lines sit neatly on nearly invisible shelves.

Three slender birch tree trunks disappear into the floor and ceiling, punctuating the room’s design. Like the mottled skim of the plasterwork, their thin papery skins continue to change over time, often sloughing off to the touch. Reclaimed from a nearby forest, these branches successfully anchor the metaphoric landscape in the local, and mask the discrete service point to the rear. 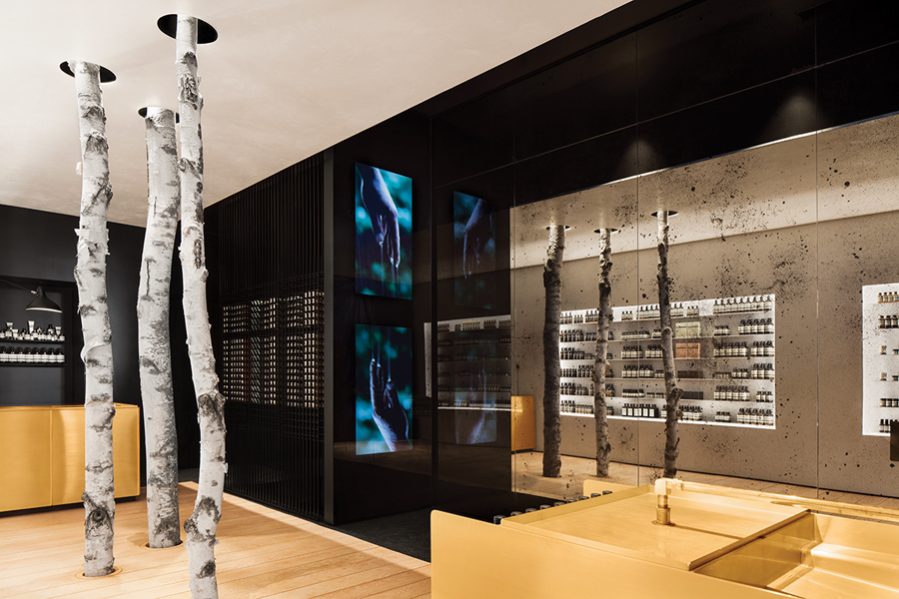 Navigating this retail space is an embodied experience that culminates above an oversized brass wash basin, cantilevered dramatically into the room from the lip of the storefront window. For Carle, the introduction of this metal alloy links to the mining industry, which he understands as a point of contact between humans and the landscape—and which he sees as a clear counterpoint to the purity of water. For Aesop, a sculptural sink features in each of their boutiques, and is the site where access to their product is mediated through an en-counter with knowledgeable staff. Standing at a comfortable distance across this brass precipice, customers are invited to a ritual-like washing of hands and selective sampling of Aesop’s merchandise. 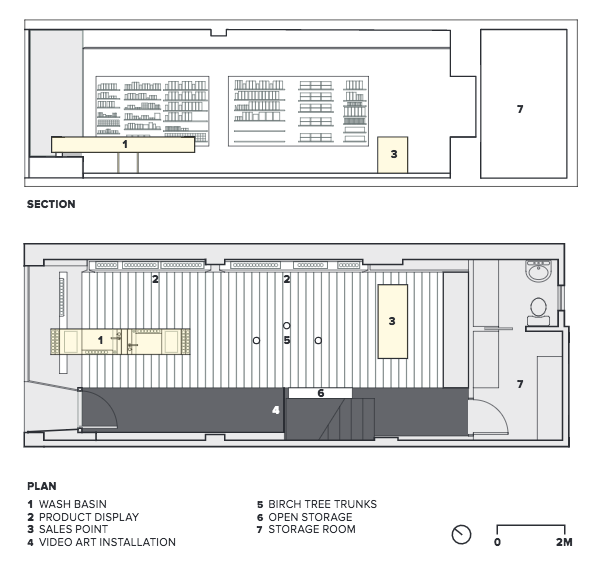 Aesop’s approach of developing a unique, locally relevant design vocabulary for each project is a refreshing alternative to the standardization and uniformity typically associated with retail branding. The subtlety and richness of Carle’s design promote a sense of discovery for the urban pedestrian and newcomer to Aesop, by introducing the brand through a precise choreography of materials and movement. Continuing their collaboration, Carle is currently working on designs for boutiques in Seattle, Houston and Dallas, all cities he admittedly knew little about before embarking on extensive consultation with local historians, architects and archives. Thus, the opportunity for a Canadian designer to engage American cities by means of a brand is another product of this unique approach—one that fosters cultural stewardship rather than anonymizing space.

Tanya Southcott is a Montreal-based writer and Ph.D. student at McGill University’s School of Architecture.

Book Review: Attunement—Architectural Meaning After the Crisis of Modern Science