Designed by architect Roger Taillibert for the 1976 Summer Olympic Games, the inclined tower of Montreal’s Olympic Stadium will this year greet its first tenants: the employees of the AccèsD online payment platform of the Desjardins Group, the leading cooperative financial group in Canada. For the occasion, Provencher_Roy carried out a complete rehabilitation of the façades and a restructuring of the interior spaces. 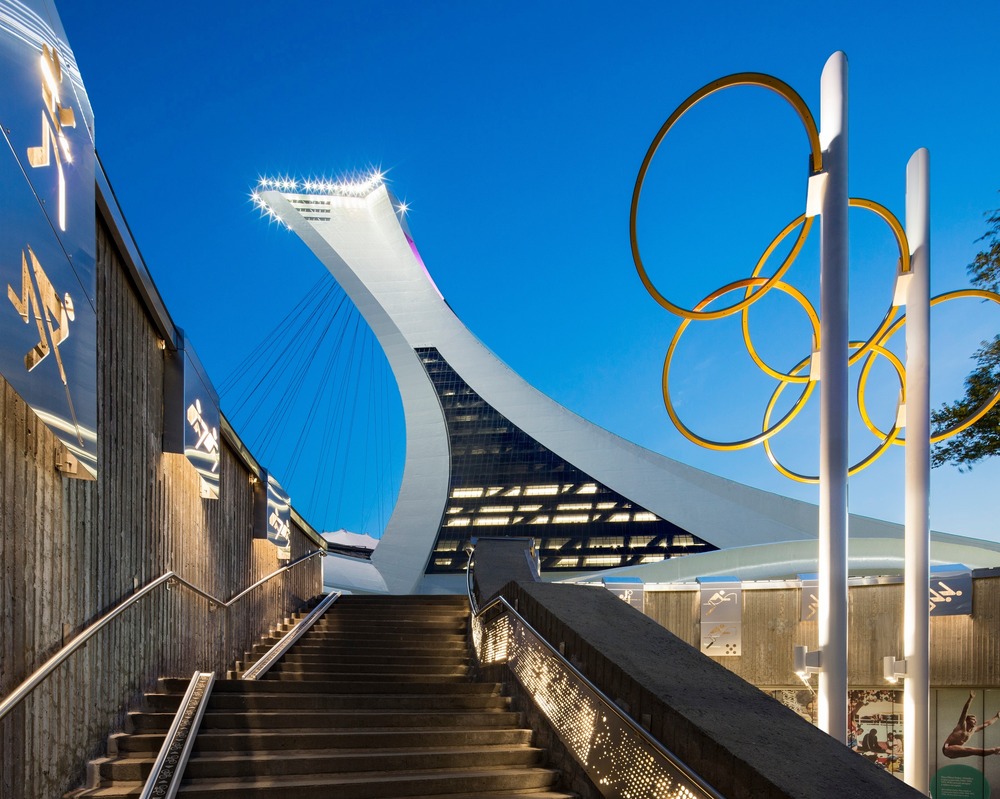 Montreal’s Olympic Park, administered by the Olympic Installations Board (RIO), is located in the Mercier–Hochelaga-Maisonneuve borough, in the city’s east end. It boasts one of the island’s most modern multisport complexes, frequently hosts major events, and accommodates provincial and national sports and recreation associations. During the work undertaken in 2015 to refurbish and renovate the tower, which had been planned well in advance by the RIO, Provencher_Roy replaced the existing prefabricated concrete envelope with a curtain wall for more abundant transparency and fenestration, thereby augmenting the presence of natural light within while respecting the original architecture. 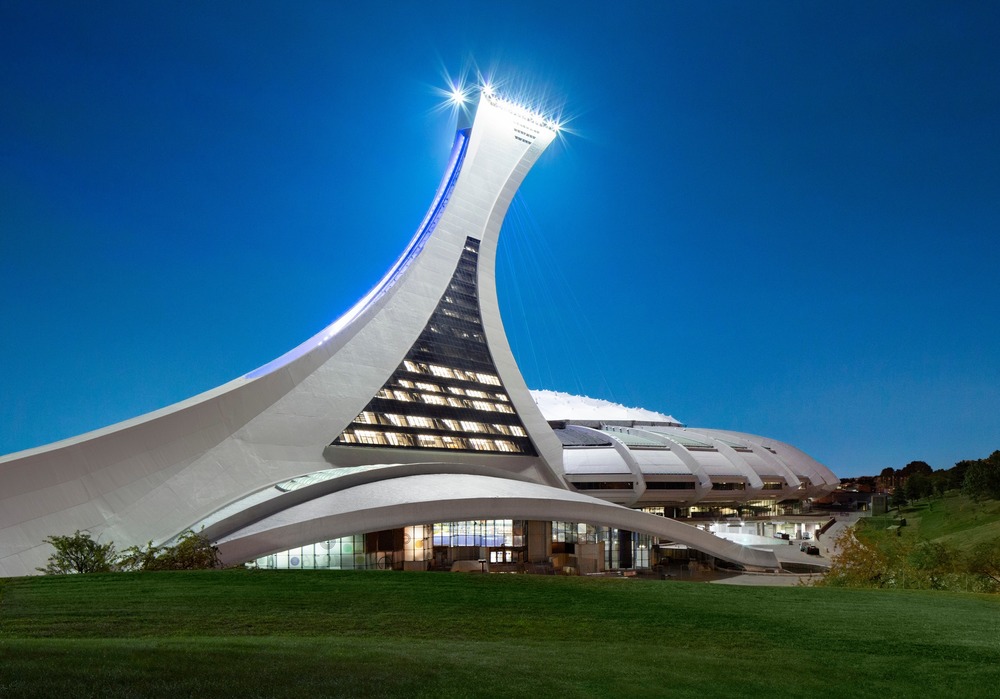 In 1971, then-mayor Jean Drapeau, impressed by the Parc des Princes stadium in Paris, called on its architect, Roger Taillibert, to conceive Montréal’s Olympic Park. One year later, the project model, featuring a dominant ellipsoidal building, was unveiled to the international press. Open at its centre, with a gigantic, 165-metre inclined tower perched above it, the proposed stadium with the lyrical curves was both spectacular in effect and unlike anything else being built at that time. With a 60,000-seat capacity, it was equipped with a soft, retractable roof supported by the tower, a design that enabled an open stadium in summertime and a covered one in the winter months. The ensemble obeyed the laws of physical equilibrium and incorporated the prestressed concrete techniques developed by Freyssinet. A genuine architectural milestone, Montreal’s Olympic Park is now considered Montreal’s most visible emblem abroad, and has attracted over 100 million visitors since its creation. 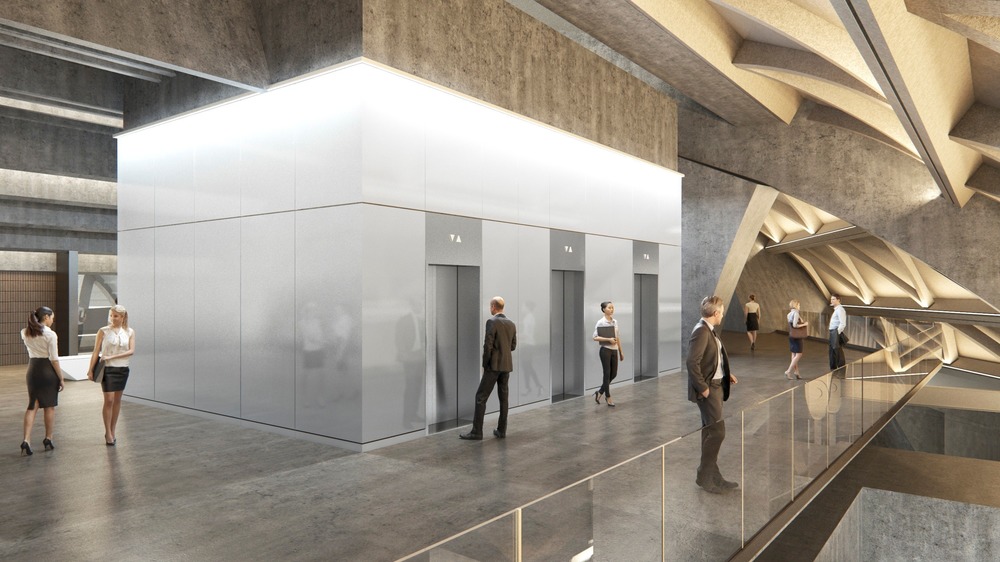 The tower was originally designed to host sport associations and meet the needs of their activities, a vocation which came to an end in 1987. The exterior walls had employed prefab concrete panels pierced with vertical strips of windows to provide natural zenithal lighting that would not blind athletes as they practiced their sport. However, the facilities would subsequently remain vacant for 30 years. Today, the Montréal Tower has a new vocation as office space, with one illustrious tenant being the Desjardins Group’s AccèsD division. 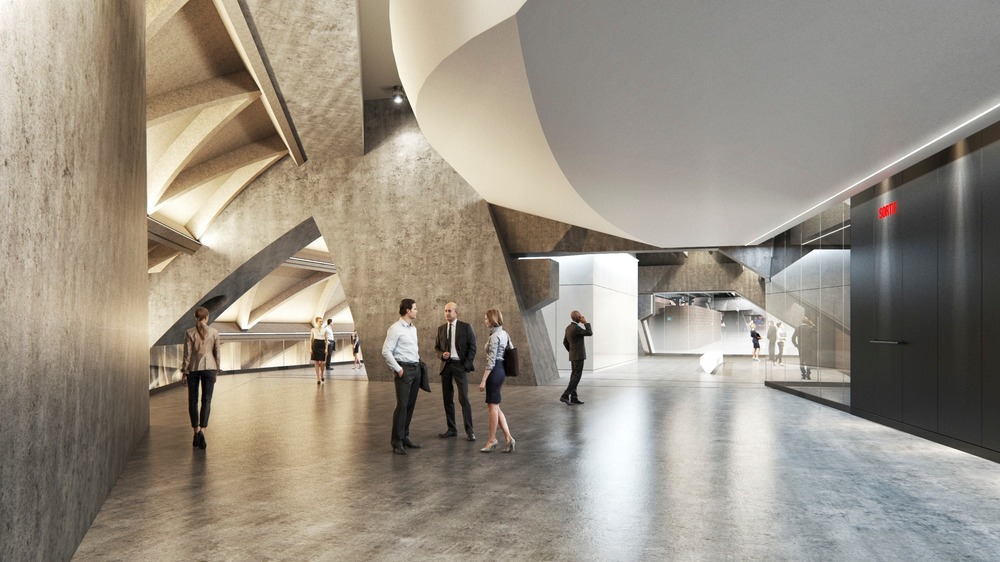 The thousand employees who will move in will enjoy modern work spaces, bathed in natural light. To achieve this result, however, almost all of the Montréal Tower’s mechanical systems had to be renovated to bring them up to code and standards. Yet the biggest challenge was undoubtedly the stripping of the tower’s concrete facings to make way for the transparency afforded by a glass curtain wall covering 60% of the façade—an essential element in creating a pleasant work environment. In addition to revealing the spectacular structure of this architectural icon, this approach imparts to the tower a new vitality. “After its 30 years of concealed existence, we are now finally unveiling to the whole world the structure of the Montréal Tower!” says Anik Mandalian, project manager and partner architect at Provencher_Roy.

Provencher_Roy won the 2017 CanBIM Design & Engineering Award for its work on the Montréal Tower, a project made possible by BIM (Building Information Modeling) technology. Indeed, the design team—comprised of architects, engineers, contractors and surveyors—had gathered a wealth of data generated by, among other means, the use of laser scanning technology to form point clouds enabling the creation of a comprehensive, high-resolution 3D model of the existing structure. This provided the team an extremely precise picture of the project and its challenges, and allowed them to update the drawings made in the 70s.

The use of BIM also enabled a ramped-up construction timeline. The structure’s form and volume posed a considerable challenge to the team tasked with adding the curtain wall. The latter’s design, adapted to the tower’s unique geometry, was a delicate undertaking and great care and attention had to be given to minimizing panel weight and mitigating the increasing steepness between the first and final floors. The use of curved insulated glass being neither practical nor economically feasible, it was necessary to eliminate the curvature of the tower’s facings by extending the existing slabs so as to make the latter parallel on all storeys. To minimize risk, this architectural concept was validated upstream by way of numerous computer-assisted tests and simulations using BIM technology. And to preserve the tower’s original intent, an architecture committee comprised of diverse professionals, among them architects, heritage experts and members of the Olympic Park’s board of directors, was formed.

Besides providing greater natural light, the curtain wall concept ensures great permeability between the tower’s interior and exterior. The use of glass, a visually lighter material, imparts elegance to the already slender tower. Spandrel glass is used to conceal the building’s structures between floors, achieving a more seamless effect while maintaining the pronounced tapering effect as the surface area of each successive floor diminishes with increasing elevation, an essential aspect of Taillibert’s original design.

The high proportion of glazing results in substantial gains in passive solar heat. While this guarantees the comfort of occupants in winter months, it may lead to higher air conditioning costs in the summer, hence the use of tinted glass. To ensure the architectural homogeneity of the curtain wall with respect to the fenestration materials of the Olympic Park buildings, particularly the Biodôme, the Sports Centre and the Stadium, bronze-tinted glass was selected.

‘Made in Spain’ architecture lectures coming to Toronto and Montreal