The Montreal Port Authority (MPA) has officially unveiled its plans for the restoration of Alexandra Pier and the Iberville International Passenger Terminal, designed by the firm Provencher_Roy.

The firm worked closely with the MPA to not only deliver a totally renovated maritime terminal that has been upgraded to meet the current operational needs of cruise lines, of which a growing number are choosing Montreal as a tourist destination, but also to better integrate the pier and the maritime terminal into the urban fabric of Old Montreal and to satisfy citizens’ wishes for greater access to the waterfront.

“This is a structuring project for the tourism industry, as well as for residents and visitors of Old Montreal, who will benefit from the revitalization of the Alexandra Pier facilities,” says Claude Provencher, architect and senior partner.

In the early 20th century, Alexandra Pier integrated several port activities, including the reception of immigrants and travellers and the transshipment of cargo, as well as facilities that made Montreal the world’s largest cereal port. Measuring 305 metres long by 91 metres wide, the pier originally housed four huge, two-storey hangars.

In 1967, the Iberville terminal was used exclusively for receiving cruise passengers and circulation on the site was limited to taxis, buses and cars, a situation exacerbated when the hangars were converted into parking lots. It was not particularly suited to pedestrian circulation.

Today, despite significant investments for their maintenance over the past 10 years, these infrastructures, located in the heart of Old Montreal, show advanced signs of aging and operational obsolescence that are compromising their ability to keep providing the services expected of them.

The maritime terminal, completely redesigned, will be moved to the entrance of Alexandra Pier, bringing passengers closer to the Old Port and its shops. Furthermore, the terminal will now welcome passengers at ground level in order to facilitate embarking and disembarking and the processing of luggage. Also, continuous-loop lanes for vehicles will improve traffic flow and simplify access to the port facilities and parking spaces. A reserved pedestrian pathway will be integrated, significantly improving access to the site as well.

A major new development: Montrealers will have access to a landscaped esplanade located on the roof of the maritime terminal. This pedestrian path will represent a sizeable addition to the Old Port’s network of public spaces and help forge stronger ties between the Saint Lawrence River, the terminal and the urban fabric.

“From the project’s outset, our aim was to extend the Old Port’s linear park onto the pier. We wanted to create a space that emphasizes the historical richness of the site while also providing a park, a place to relax, and a space that people could make their own,” said Sonia Gagné, architect and partner at Provencher_Roy. 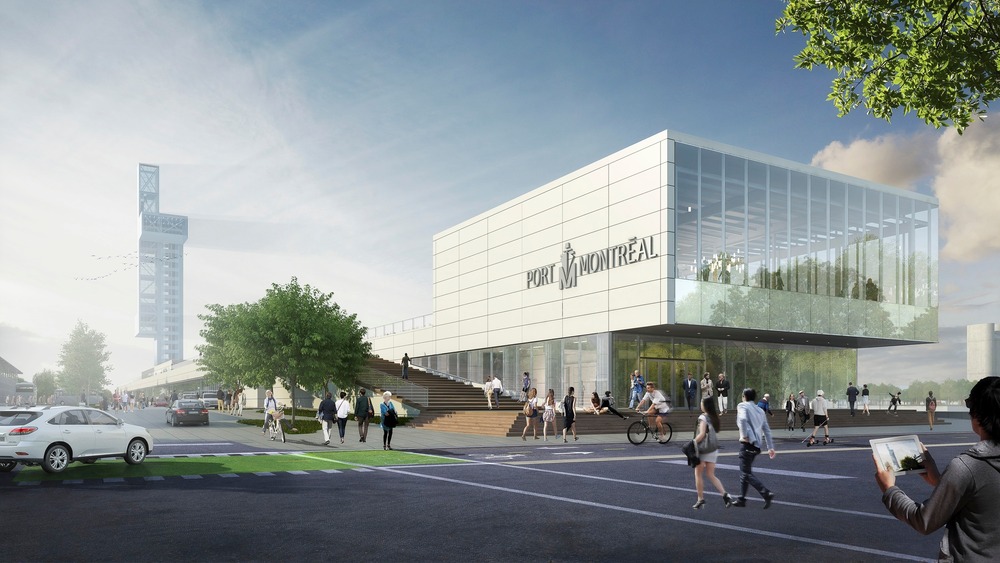 One of the project’s more innovative features is the addition of a tower whose primary function will be to convey and embody Alexandra Pier’s maritime vocation. Like a lighthouse, it will constitute the first means by which ships and passengers will discern the port; for Montrealers, it will signal the location of the river. Thanks to several elevated viewing platforms, the tower will offer a unique vantage point for observing the city and river, and enable visitors to discover the city upon arrival in the port. It will also serve as a transitional element connecting the raised esplanade, the maritime terminal and the new park at the tip of Alexandra Pier. The architectural vocabulary developed for the tower and its structure evokes the port’s rich industrial heritage.

“These improved facilities will meet client needs and give Montrealers a renewed access to our majestic Saint Lawrence River to mark Montreal’s 375th anniversary in 2017,” concludes MPA president and CEO Sylvie Vachon.