More than one-half mile of elevated expressway was demolished in the heart of downtown Montréal to make way for a ground-level urban boulevard and over six acres of continuous public space, bookended by two monumental sculptures. Montréal was recently named Canada’s first recipient of a SITES certification, awarded by the Green Business Certification Inc. (GBCI) to honour the excellence demonstrated in implementing the innovative, sustainability-minded best practices that characterize the Bonaventure Project.

For more than 50 years, the elevated Bonaventure Expressway, built in 1966, cut across the city centre of Montréal, a thriving metropolis located on an archipelago in the middle of the majestic St. Lawrence River. This thoroughfare was a major gateway to the downtown core, accommodating more than 27,000 vehicles per day, including 1,900 buses. Rather than extending the service life of the aging structure, the City opted for a large-scale redevelopment, the first one of its kind in Canada, thereby making it possible to:

This initiative, spearheaded entirely by the City’s administration, forms the backbone of the Bonaventure Project which was completed on time and on budget (CAN$141.7 million).

The implementation of more than 1.5 miles of reserved bus lanes and of a state-of-the-art intelligent transportation system (ITS) is instrumental in replacing the expressway with an urban boulevard at ground level. The new layout also eliminates the daily passage of hundreds of buses through a strictly residential neighbourhood adjacent to the former expressway.

The construction of 20-foot-wide landscaped sidewalks and more than one mile of bicycle paths drastically helps improve the active transportation options. 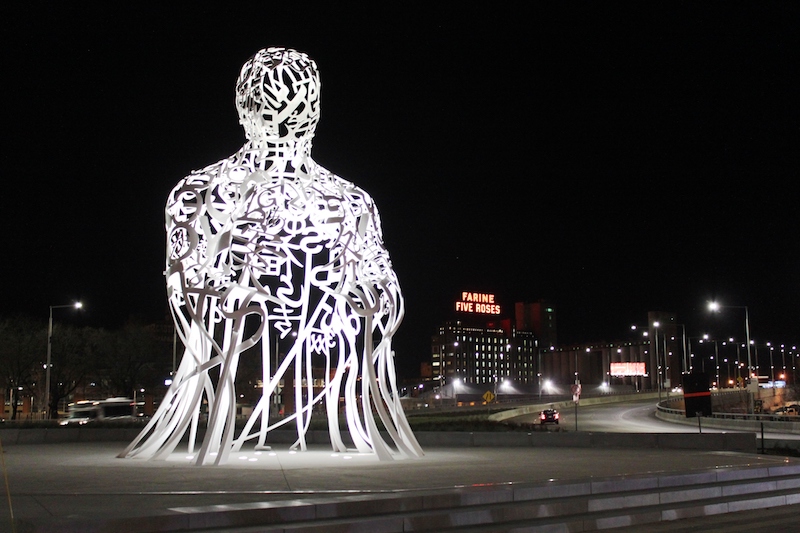 In addition, the Bonaventure Project features a striking series of public spaces, covering an area equal to five football fields, in a formerly industrial part of the downtown that had no parks or squares. Montréal’s city centre now boasts a new green promenade that provides a unique, multi-faceted user experience linked together by a 1300-foot linear bench spanning six city blocks.

Drawing on a thorough consultation process with the area’s residents and workers, the Bonaventure Project meets many specific needs, with lounge chairs, picnic tables, ping-pong tables, a play area for children, an outdoor exercise area and a dog run.

Adding considerably to the canopy cover, more than 300 trees were planted along with no less than 30,000 shrubs and perennials. The project is the first in Canada to obtain a SITES certification from the U.S. Green Business Certification Inc. (GBCI) in recognition of fostering sustainable urban development and construction as well as positive social and environmental impacts in the area.

Public art also plays a pivotal role in the undertaking. The two thresholds to the new boulevard stand out, each marked with a monumental sculpture. At the northern end is Dendrites by Québec artist Michel de Broin. Created following a Canada-wide competition, Dendrites underscores the presence in Montréal of the world headquarters of the International Civil Aviation Organization (ICAO), one of the United Nations’ specialized agencies. At the southern end of the boulevard, Source by Spanish artist Jaume Plensa marks the limit of the downtown district. Commissioned by and on long-term loan from art patrons France Chrétien-Desmarais and André Desmarais, this 35-foot-high work consists of a weaving of characters from eight different alphabets, symbolizing the diversity and interconnectedness of human cultures.

The Bonaventure Project contributes significantly to the vitality of the district’s real estate scene. Since construction kicked off in 2011, more than CAN $ 1.24 billion has been invested in various nearby residential, office and retail developments and further CAN $ 975 million investments are underway. This reduces considerably the number of outdoor parking lots in the city centre.