Book Reviews: This Being and Midway Radicals 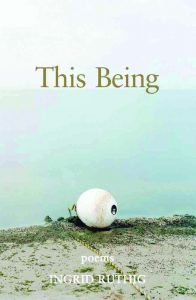 Poems create space in multiple ways. Two recent books, Midway Radicals by Ted Landrum, and This Being by Ingrid Ruthig, are both by poets educated in architecture. Landrum is on the faculty of the School of Architecture at the University of Manitoba; Ruthig practised as an architect in Toronto in the 1980s and 90s, but retired her professional licence in 2001. Since then, she has worked primarily as a writer and, later, also as a visual artist. Ruthig writes about space; Landrum writes with space. Ruthig uses conventional syntax to privilege content; Landrum engages in word play to privilege form. Taken together, the two books reveal something about the range and scope of both poetry and architecture.

Ted Landrum’s poems look obscure and feel obscure, much like an architect’s construction drawings may appear to the uninitiated. And just like the verbal notations that help to explain architectural drawings, the notes compiled at the end of the book are essential to unraveling the mystery of words on the page. In the endnotes, Landrum reveals that most of the poems are essentially “adaptive reuse” of existing prose or poem writings by such diverse authors as Aristotle, Edgar Allen Poe and Lyn Hejinian. Take, for example, “So nets a beginning,” which begins as follows: 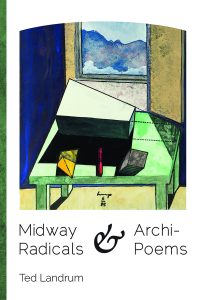 Landrum describes this poem as a section cut through six of Ted Berrigan’s sonnets of 1964, implying that even Berrigan’s poems are works of architecture, within which a space may be discovered. “Lamp of Beauty,” he tells us in the endnotes, is a “radical abbreviation” of John Ruskin’s classic text Seven Lamps of Architecture.

The typography of these poems satisfies at first sight, like the intrinsic beauty of an architectural drawing. But as always with writing that looks both tantalizing and obscure, we are invited to dig deep. It is clear that Landrum worked hard to construct this language: each poem with its own rules drawn from other texts, each poem a literary evolution, or mutation or dissection.

Ingrid Ruthig, whom novelist Douglas Glover has described as a “recovering architect,” paints vivid scenes with words.. (She is also, as mentioned, an artist, and has produced stunning collages that combine image and text in formal patterns. It is here, and not in her poems, that her work may overlap with Landrum’s.) There is nothing abstract or architectural, radical or obscure, in the poems of This Being. Some of her metaphors are as broad as our state of being in the world:

Others are as specific as a set of coordinates in the vast Canadian prairie. The poem “Winter Abandons Canada” is a most poignant challenge to contemporary intersections of politics, climate and identity. Ruthig writes: “Even skeptics have to question / if we’re still who we reckon we are.” Though two of the poems evoke Paris in summer, where “the streets sweltered / people prostrated nude on the floor,” these are interludes in a collection that honors the Canadian landscape. When in “Elegy for a Northern Town,” she observes how “ . . . kids steer rowboats by maps / stitched to shorelines,” we sense the town hanging on by a thread.

Present within This Being are Ontario and the north, freezing winds and fertile soils, deep roots of tradition and looming winds of change. If there is architecture here, it manifests as the edifice of a Canadian soul, built of words that are both monumental and humble. For a non-Canadian like me, the poems embody the emotional structure of what it means to belong north of the 49th parallel.

This Being by Ingrid Ruthig, Fitzhenry & Whiteside, 2016

Jill Stoner is Director of the Azrieli School of Architecture and Urbanism at Carleton University. Her 2001 book Poems for Architects (William Stout Publishers) is an anthology of 48 poems that reveal the spatial sensibility of the 20th century.

Book Review: When is the Digital in Architecture?