A modern rowhouse development in Victoria, BC, brings new thinking to an age-old typology.

A four-storey rowhouse sits quietly on a tree-lined collector street in Victoria, BC, enjoying the camouflage of the foliage and a comfortable proximity to similarly sized townhouses and single-family detached homes. The building’s mass—rendered in deeply textured dark taupe stucco—presents as a series of articulated boxes that gently recede from the sidewalk and the mature London planes of Shelbourne Avenue. Confident, yet subdued, the design of Pearl Block finds balance in a modulated and family-friendly approach that builds on the typology of the rowhouse, incorporating elements that are at once new and historical.

Completed this year, Pearl Block resulted from a collaboration between D’Arcy Jones Architects and Aryze Developments. D’Arcy Jones is a Vancouver-based practice that has made a name for itself designing single-family homes in the BC mainland; Pearl Block is the studio’s first multi-family housing project. Aryze started out as a Victoria-based custom home-builder, and then branched into development out of a desire to provide affordable urban infill housing, helping to counteract the city’s housing crisis.

Because of its triangular lot shape, Pearl Block’s site was considered a poor building site and had sat vacant for 65 years. Those constraints made it exactly the kind of project Aryze wanted to take on: a place where they could see the potential overlooked by others. They sought to create an attainable alternative to detached single family homes on the site, creating a set of high-quality, well-constructed places for families who admired modern architecture but could not afford a custom home. 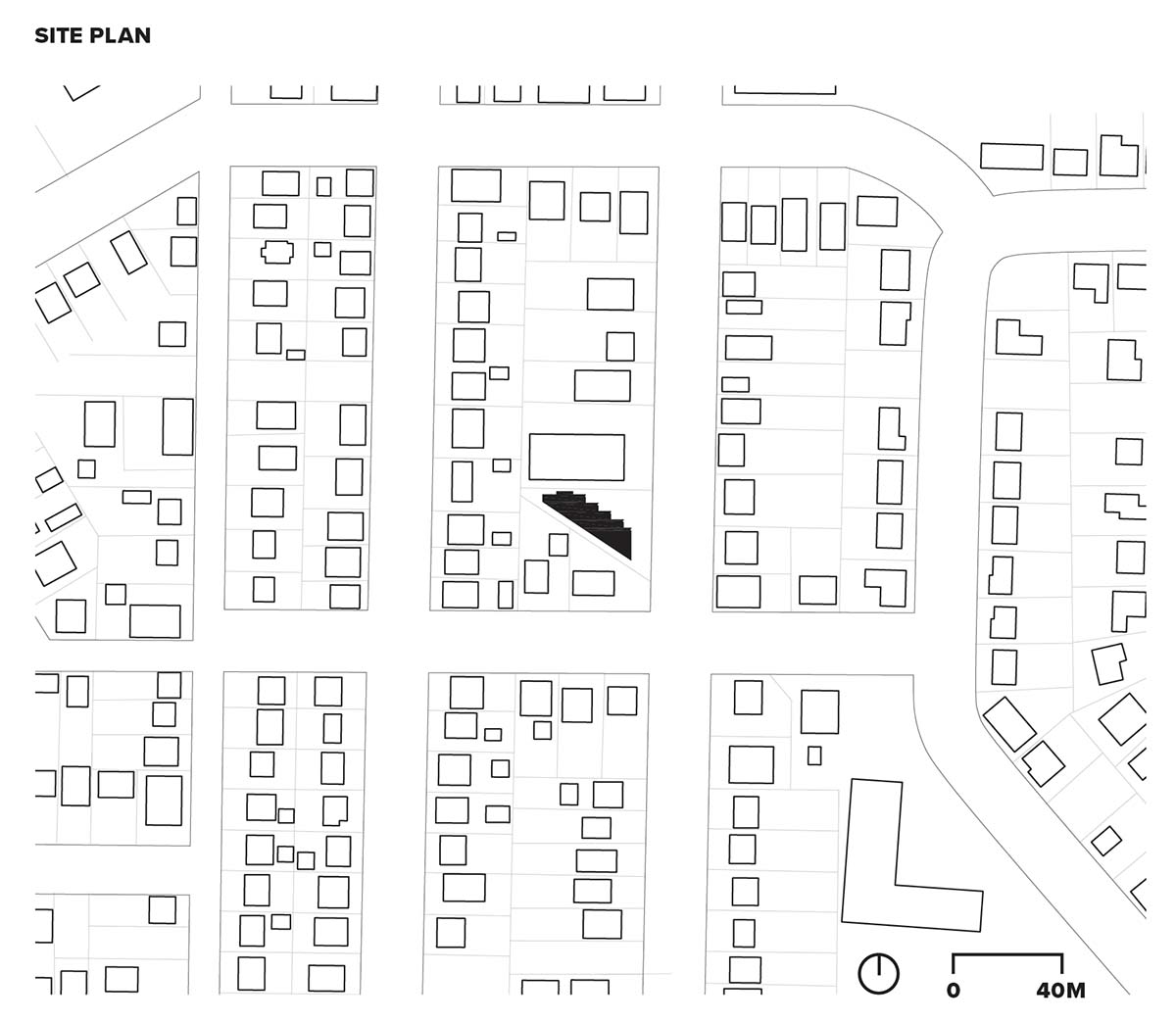 To address the site’s geometric particularities, they engaged D’Arcy Jones Architects, who proposed a cluster of six rowhouse units in a sawtooth pattern, positioned around a common forecourt. Stucco was the choice of exterior finishing from the start, and was chosen to emulate the stucco of traditional Victorian homes built at the end of the 19th century. Initially, the City of Victoria’s Planning department was not on-side with the development: they found the stucco heritage approach to be antiquated, and objected to the “form and character” of the design. But they were won over after a favorable review by the local Architectural Design Panel, and a surprising show of support from the project’s neighbours.

In describing the public approvals process, D’Arcy Jones says that  the general public has an understandable fear of change, yet “too often, both sides are not respectful enough of one another.” In the design of projects like Pearl Block, he aims to make his buildings appealing to modern-minded residents and neighbours alike—blending newness and craft in a way that aligns well with Aryze’s commitment to using traditional building methods paired with innovative construction techniques and intelligent design. Jones adds, “Architecture has a responsibility to be good on other people’s terms.”

The site planning of Pearl Block exhibits solid urban design principles. First, the size and massing of the building matches the neighbourhood scale, yet confidently positions itself within the language of modern architecture. The design carefully considers neighbours’ access to natural light and restricts overlook into their yards. Jones likens the projecting wing walls of the façade to horse blinders, designed to focus residents’ views toward the street, rather than peering into neighbours’ lots. Pearl Block’s front doors likewise face the street, with garage doors turned towards the side yard. Large windows from the second-floor living rooms further enhance a connection to the front, adopting the “eyes on the street” approach promoted by urbanist Jane Jacobs.

The exterior of Pearl Block is modern, yet it avoids current design preoccupations with tight, shiny facades. Instead, this architecture evokes a strain of modernism more in line with the coarse walls of Marcel Breuer or the rougher period of Le Corbusier. The rhythm of the stucco panels and recessed windows expresses bulky proportions, producing a play of deep shadows across the façades. The exposed concrete base further adds to the sense of massiveness.

Approaching the units on foot, one is aware of the continuous cantilevered soffit above the main entrances and garage doors. According to Jones, this cantilever was necessary to accommodate vehicle turning clearances. The result is a common portico that protects the doors from rain and behaves as a threshold between the public and private realms. Near the entry, a stocky plywood guardrail guides residents up to the second floor.

At the main living area on the second floor, it becomes evident that the units are L-shaped in plan. The kitchen faces a large sliding glass door and enclosed balcony to the south, while the living area faces east, towards the street. Although compact, there is a subtle dynamism to this space, thanks to multiple natural light sources and the dual orientation of the room. Jones points to his interest in creating “nooks and crannies” in contrast to the linear spatial experience common in townhouse and multi-family designs. He describes space in terms of solid and void, adding that people respond to this on an emotional level. “So many apartments are a version of the glass tube,” says Jones, adding that having multiple spaces—rather than a single large one—allows more possibilities for family life.

Sleeping areas are grouped on the third floor. Here, the designer and developer have opted for three smaller bedrooms rather than two larger ones, citing the benefit of an extra room for a child’s bedroom or small study. Jones describes the project as “working with minimums.” People who are accustomed to a master bedroom with room for a couch, he says, would find these bedrooms too small.

Continuing up the stairs, a large operable skylight opens to the roof. Here, the sense of compression experienced on the bedroom floor gives way to open sky and a wood-enclosed roof garden the size of the entire floorplate. Jones describes this space as the “yard” of the house. Cedar-lined perimeter walls extend five feet tall, designed to match typical fence heights in the city.  There is a sense of spacious luxury here, paired with privacy thanks to the tall enclosing walls. 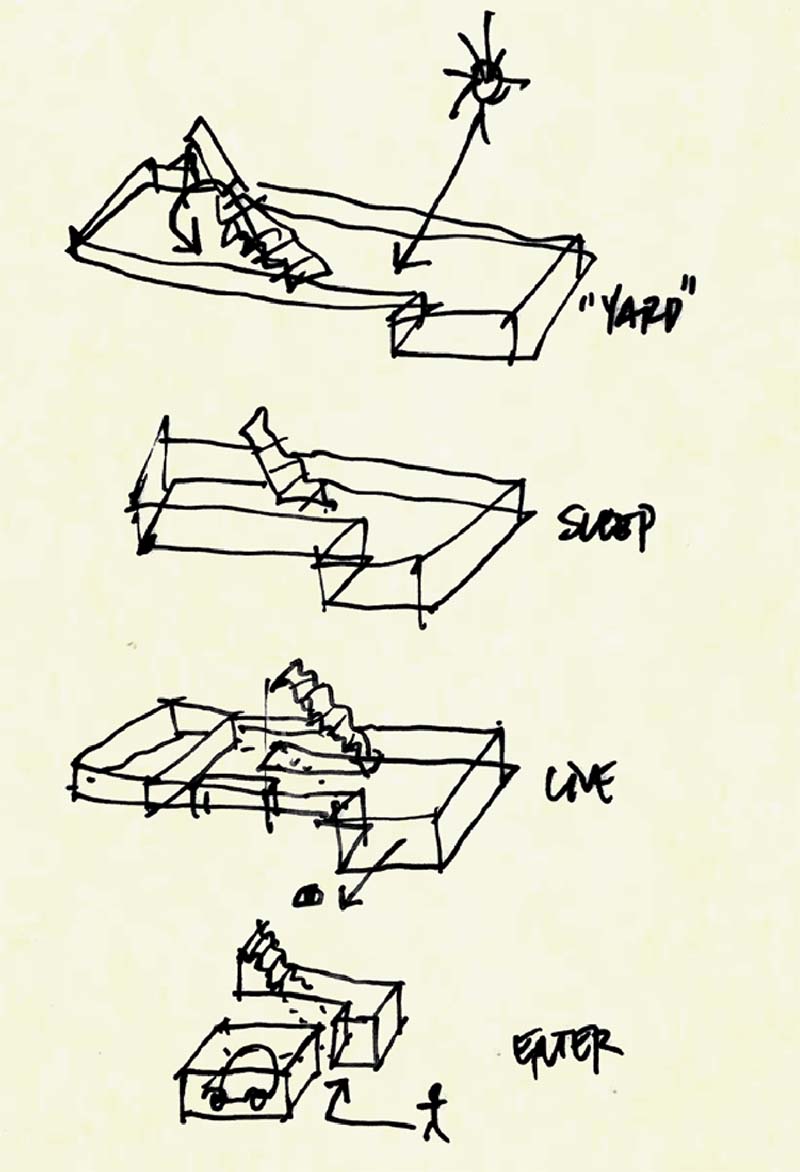 Jones describes his design process as working from the inside out. For him, the design of bedrooms begins from the position of the bed and moves out from there; dining areas begin from the table; and so on. The scale and proportion of rooms comes first, and it’s only after the interiors are resolved that exterior design is explored. He adds that his studio is constantly drawing, that drawing is like thinking out loud. “We are only going forward,” says Jones: he encourages his studio to avoid rebuilding work in reaction to unexpected site conditions, instead choosing to adapt the design to meet new conditions.

As in all of Jones’ projects, there is a sense of careful consideration to details and materiality in Pearl Block. “We are never too busy to let anything be,” says Jones. Indeed, there is persistence at work here: a continuity of line and simple elegance that does not rely on the use of expensive materials.

Jones speaks about his desire to introduce both newness and history into his designs as if they are two sides of a coin. Ancient forms of housing inspire his work. “How people live hasn’t changed much,” he says. “I think the average person could go into a house in Pompeii today and would appreciate the experience of rooms and the hierarchies. They could move into them with modern details and be super comfortable—it would feel as fresh as if it was made yesterday.” 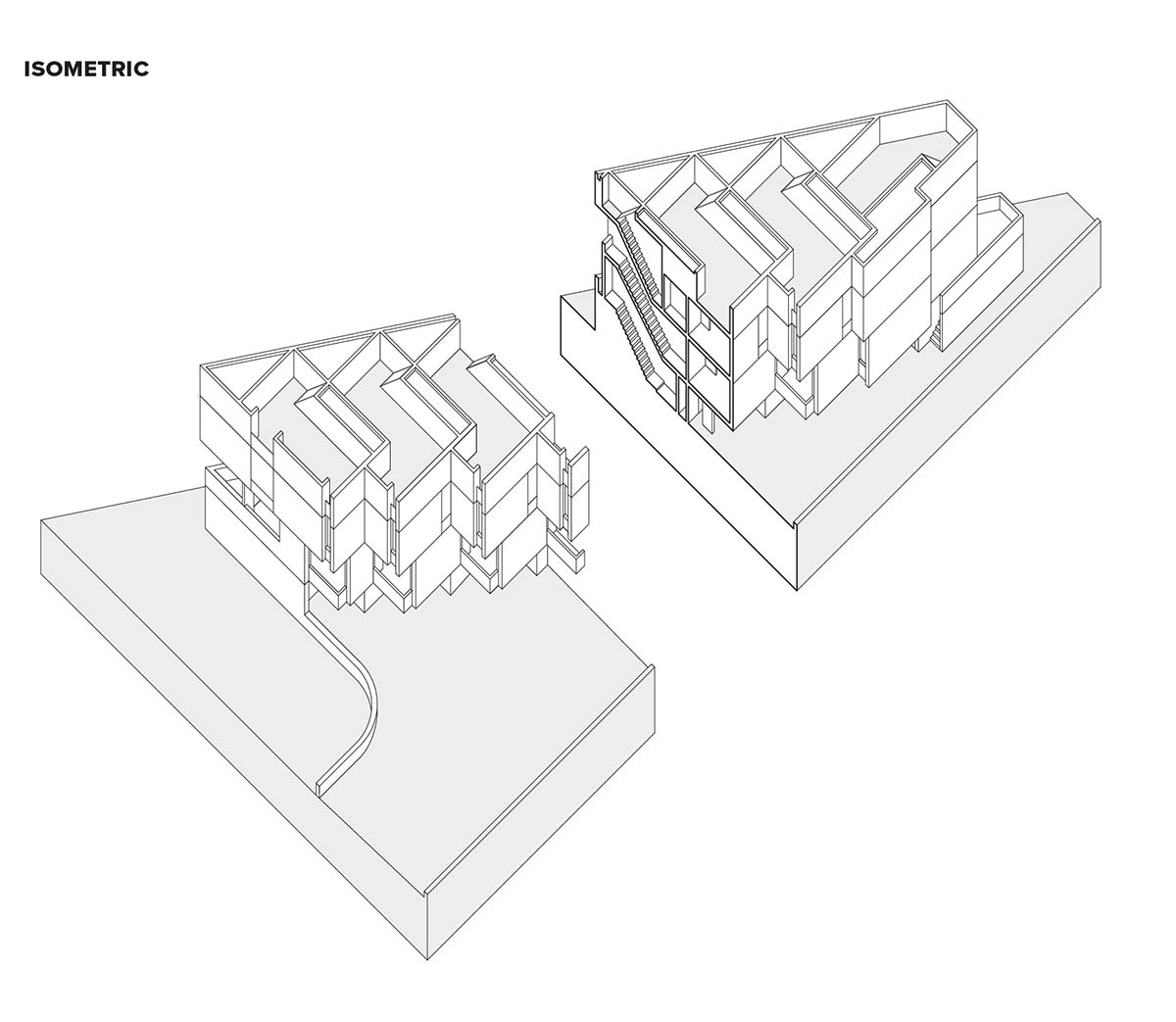 “A lot of people, if they are really honest with themselves, would like a door on the street and a relationship to the street. They’d like to have some kind of garden, not have someone above and below them, and not ride an elevator,” says Jones. “The rowhouse is an ancient building block and if everybody did it, everywhere, we wouldn’t need all these towers, which I think are not that appealing. I think people are sometimes looking for an overly complicated, magical design solution: but the solution is already done, and it exists in the rowhouse.”

Paul Koopman, MRAIC, is a Senior Project Architect at Cascadia Architects in Victoria.

A New View in Ambleside: Grosvenor Ambleside, West Vancouver, BC

A New View in Ambleside: Grosvenor Ambleside, West Vancouver, BC