Just south of Bloor Street, the University of Toronto is planning a striking addition to downtown’s St. George campus. Rising above the Goldring Athletic Centre, the design for a 14-storey mass timber and concrete hybrid tower has been unveiled. Designed by Patkau Architects and MJMA, the 14-storey tower is expected to be the tallest mass timber and concrete hybrid of its kind in North America. 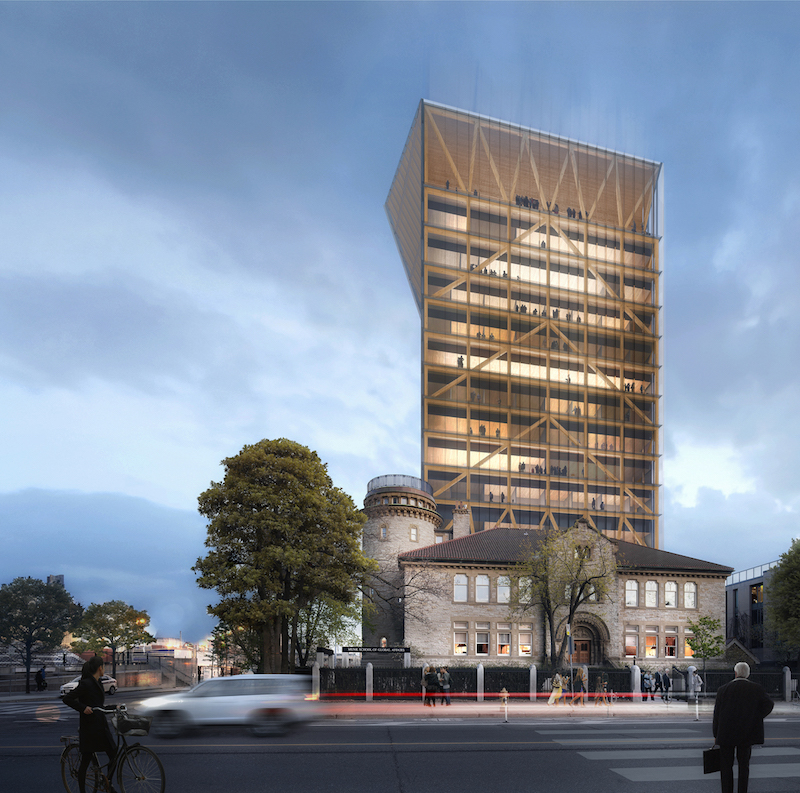 The project accelerates a growing trend in the use of mass timber technology at academic institutions. At the University of British Columbia, the recently completed Brock Commons Tallwood House student residence stands at a height of 18 storeys, while Toronto’s George Brown College recently held a design competition — won by the team of Moriyama & Teshima and Acton Ostry Architects — to bring a tall wood building to the Toronto waterfront.

The University of Toronto’s website offers more details regarding the project:

U of T is working on the project with Patkau Architects of Vancouver in partnership with MacLennan Jaunkalns Miller Architects (MJMA) of Toronto and Blackwell Structural Engineers – all of whom worked together on the Goldring Centre, which opened in 2014.

The Goldring Centre was designed and built with the structural integrity to be the base for the tower so there will be no need to dig deeper in order to build the taller structure, says Ted Watson, a partner at MJMA.

“As part of that project we developed a structural base, a foundation, to put the future tower on top of,” he says. “We don’t have to go down into the ground and all of the mess and construction disruption that goes along with that – that work has been done.”

The tower was originally slated to be built using steel, but after becoming aware of government incentives and of research by members of the Faculty of Forestry, including the former dean Mohini Sain, the university decided to go with timber.

You can learn more about the project via the University’s release, linked here.