There’s a lane in Sundance Housing Co-op that provides a perfect “before” and “after” picture for housing in Canada. On one side are the original townhouses, clad in 44-year-old tan stucco and brown siding. Across from them sit their freshly updated siblings, transformed with colourful new fibre-cement siding, new windows, and air source heat pumps outside. The old gas-heated buildings use about the same amount of energy as typical Canadian townhouses. The new ones use one quarter of that, all electric, and soon to be all-renewable. And they do it at a fraction of the cost and the emissions of a new build.

The retrofit of Edmonton’s Sundance Housing Co-op is a $7 million upgrade to the 59-unit, 15-building townhouse complex. The project is funded in part by Natural Resources Canada’s Green Infrastructure Phase II, Energy Efficient Buildings Program. Built in 1977, the Sundance Co-op had been well maintained; but, beyond replacing windows in 1998, it had not had major interventions until now. The Sundance membership has a history of foresight. When the development was being built, they decided to forego closet doors to pay for the upgrade to 2×6 walls—exceeding the building code. Forty years later, they knew re-cladding was imminent, and realized that if they ever wanted the buildings to be net zero, it was now or never. The combination of decent structural condition, necessary exterior maintenance, and forward-looking collective-minded ownership made Sundance a good candidate for a deep retrofit.

When our net zero design-build firm, Butterwick Projects, was approached with this project, we suggested that a panellized retrofit process had the potential to minimize the disruption for residents and reduce costs. While preparation and finishing still takes time, the work is much less disruptive than a site-built solution would be.

The process starts with a Lidar scan of the existing buildings. The resulting point cloud is used to determine the building geometry and the locations of key elements. These dimensions are turned into panel drawings which are sent to the panel factory. The stakes are high. A mis-sized panel or misplaced window will grind the installation operation to a halt. Nine buildings in, that hasn’t happened yet. While the 2×4 framed panels are being manufactured, the buildings are prepared for their arrival. Porches and decks are removed. A hydrovac crew creates a slot to the footing, allowing 5” of lower-carbon, graphite-infused EPS insulation to be added to the basement walls. An insulated PWF panel support box will support the new panels, decks and porch roofs, accommodate service penetrations, and provide a base for parging. The overhangs are removed to allow for a continuous air barrier over the old roof surface.

When the panels arrive on site, original windows and doors are removed, and the panels are flown into place by a crane. Each panel includes the primary air barrier, vented rain screen, and new high-efficiency windows and doors. They are tied back to the existing structure as they are put in place. A finishing carpenter follows the panel crew, installing new window returns and casings. Once a building has been covered in panels, cellulose insulation is blown into the cavity between the panel and the existing structure. The cellulose provides about R28 in new insulation, for a total of R40 including the original wall. A new scissor truss roof provides space for an additional R50 of cellulose and a new air barrier over the existing roof. Testing so far indicates that the airtightness target of less than 0.7 ACH50 is being met. The remaining heat load can now be met by air source heat pumps. After installation of air source heat pump water heaters, the old fossil-fuel gas lines are decommissioned. A solar PV system will provide about 80% of the remaining electrical load, with the balance being purchased from renewable sources. By the end of the process, the envelope and mechanical specifications are very similar to a new net zero build.

Butterwick Projects is also currently retrofitting three single-family homes, with the backing of the Smart Sustainable Resilient Infrastructure Association (SSRIA). These homes, typical of Edmonton housing stock, get a similar digital capture and panelization treatment, and will further develop the processes required to retrofit at commercial scale.

In Ottawa, a retrofit of four 70-year old townhomes has been completed using similar techniques. Ottawa Community Housing performed the work themselves, with design and detailing assistance from Cold Climate Building and If Then Architecture, as well as support from Natural Resources Canada. 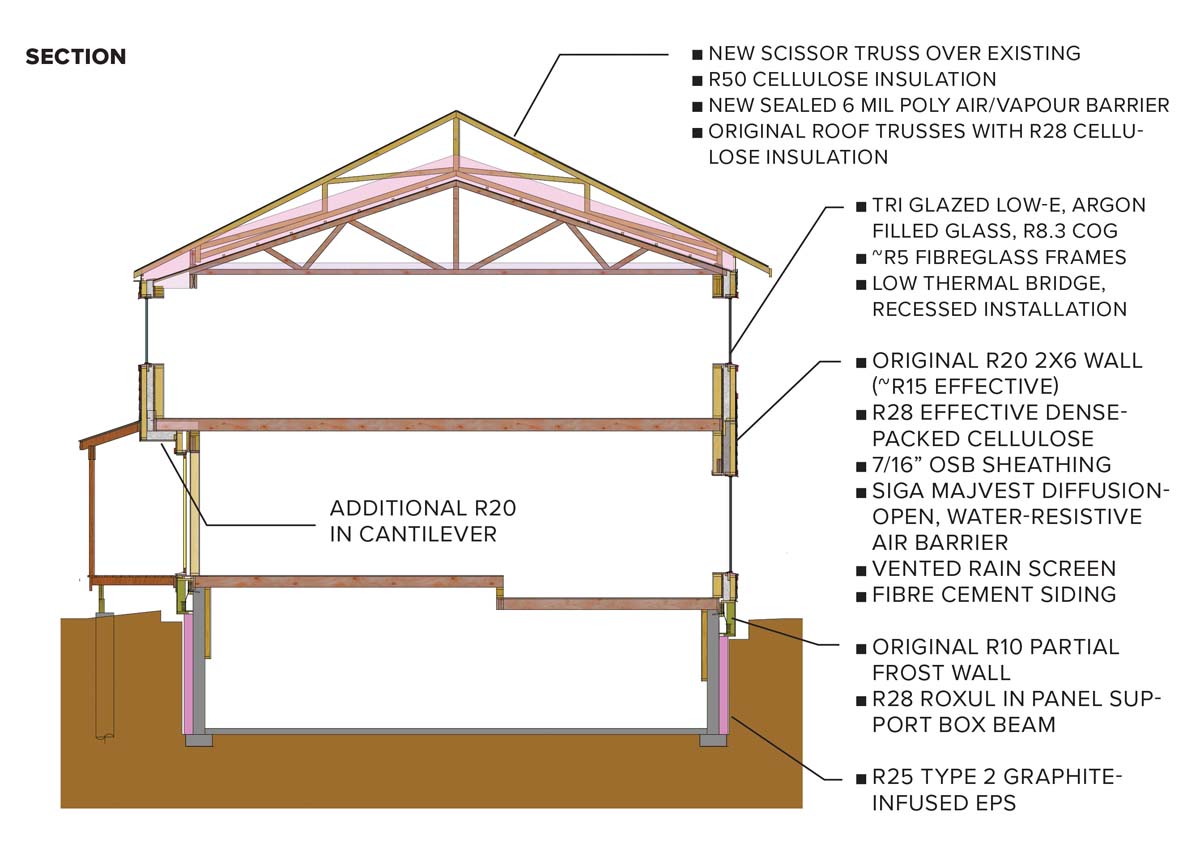 The case for deep retrofits

The fact that, as an industry, we are only now doing pilot projects is alarming, given the scale of the challenge. Around 40% of Canada’s total emissions come from the buildings we live and work in. Of the buildings that will be around in 2050, 70-80% are already standing. Reaching zero emissions from existing buildings is an immense challenge. If Canada is to reach this target, we will have to retrofit a lot of buildings. The time frame and the cost mean we need to do it as carefully—and as efficiently—as possible.

Partial and “piecemeal” upgrades—the kind encouraged by most incentive programs—can do more harm than good. People are picking the low-hanging fruit without a plan to get to net zero, adding mediocre windows that are a slight improvement, adding attic insulation without air sealing, and re-siding with some insulation but not enough. Not only do these partial upgrades not solve the problem, they undermine the business case for a more holistic deep retrofit, and lock in the remaining emissions. Typically, we get one chance per building. The money spent on partial upgrades, particularly if some of it was spent renewing the exterior, will be next to impossible to find again for any future net zero retrofit.

Aside from the obvious motivation—avoiding planetary catastrophe—deep retrofits provide a chance to transform buildings in a relatively cost-effective way. Reduced energy costs are an obvious benefit, and while we don’t know what mix of energy solutions will make up our future zero-emissions grid, everything points to a significant price increase. A deep retrofit can also fix deferred maintenance problems, and reduce future long-term maintenance costs by employing the best building science. Improved comfort is also a major factor: regardless of how residents feel about the climate emergency, they can appreciate a quiet, climate-controlled, draft-free home with a window seat in every window. In some cases, retrofits can also be used to fix previous aesthetic blunders and realign the building with the original designer’s intentions. All of these things increase resale value. Viewed through this total-cost-of-ownership lens, the upfront cost makes sense.

A useful example of how the industry can scale up can be seen in the Netherlands Energiesprong initiative—Dutch for “Energy Leap”. This program for rapid retrofits provided the conceptual basis for the Sundance pilot project. The panelized retrofit technique the Dutch teams have developed is well optimized for the regular, predictable row houses they currently focus on, which are much simpler than the complex forms of Sundance. They have succeeded in making the process minimally invasive for residents, using 3D scanning, factory-built panels, and even new mechanical equipment packaged into integrated, plug-and-play pods.

Deep retrofits may seem like a limited niche, but Energiesprong shows that they can become big business. One of the main companies working in this space in the Netherlands is multibillion-euro construction giant Volker Wessels—a multinational infrastructure company that builds bridges and stadiums, is responsible for a portion of the UK’s HS2 rail line, and holds road maintenance contracts as far afield as Alberta. Over 10,000 homes have been retrofitted in the Netherlands, and similar projects are underway elsewhere in Europe.

In order to connect the projects happening across the country and share their learning, members of the Sundance project team and champions of retrofits from across the country have formed an organization called Retrofit Canada. The primary goal of Retrofit Canada is to open-source the knowledge coming from these pilot projects. They are developing several tools to facilitate knowledge transfer and make newly developed processes accessible to the rest of the industry. The tools include a growing collection of retrofit case studies, from townhouses and bungalows to apartment buildings. The team is also developing a ‘retrofit roadmap’ to help others through the challenges—from the technical challenges of digital capture, 3D scanning, and envelope detailing, to tips for managing resident relations and obtaining financing. Knowledge is being shared openly between projects. With millions of potential retrofits spread between every town and city in Canada, there’s more than enough work to go around.

The future of retrofits

How do you build an industry overnight? Answering this question will unlock immense opportunity, but there are many things we need in order to get there. We need more pilot projects both to learn, and to demonstrate the viability of retrofits, with examples in different regions and building types. We need to push for policies and programs at all levels of government to help support this climate action. We need to ensure that architects, engineers, energy evaluators, designers, contractors, trades, manufacturers and lenders are all on the same page. We need to attract, train, and retain the workforce by showing them there is a prosperous and stable future in this work.

And then we need to retrofit a few million buildings.


Peter Amerongen is leading the design of the Sundance project and is a co-founder of Retrofit Canada. He has been designing and building energy-efficient housing in and around Edmonton since the 1970s. He is a speaker at the Green Building Festival in Toronto and online, which convenes on November 1, 2022.

Max Amerongen is a designer and writer in Edmonton, working on topics including heritage, unbuilt architecture, and climate.

“Keekagin, the thing you look for to steer when you are lost”: Healing and Building…