In 2006, the City of Edmonton began the revitalization of a 40-hectare area just east of Churchill Square that is now known as The Quarters Downtown. Historically, this part of the city was called the Boyle Street neighbourhood, after John Robert Boyle (1870-1936), a prominent local lawyer and politician. The district is one of the city’s oldest and has been home to Indigenous and immigrant groups, including Edmonton’s early Chinese community. Today, the area suffers significantly from urban blight, and is occupied by many surface parking lots waiting for reinvestment. The area began its long, steady decline in the 1950s, and urban renewal in the 1970s added to its sliding fortunes.

In order to spark new development, the City of Edmonton has invest­ed substantially in infrastructure for The Quarters. A pedestrian-focused street upgrade called the Armature (96th Street NW, formerly Kinistino Avenue) and the recently completed Kinistinâw Park, with its striking red canopy, are intended to become vibrant public focal points for the district. The new extension of Edmonton’s LRT also runs through the area. Unfortunately, redevelopment has been slow to come, as The Quarters has had to combat its reputation as a down-and-out part of the city. It’s also had to compete for development dollars with other districts in Edmonton, including the Blatchford neighbourhood on the former municipal airport site, and even suburban communities such as Sherwood Park.

Despite the challenges of reinvigorating a failing urban district, there are indications of new energy in The Quarters with various projects completed in recent years. A fresh vitality is especially evident in two recently completed centres for young arts organizations. Both are renovations of existing structures, completed through partnerships with the City of Edmonton and various granting agencies. The Ociciwan Contemporary Art Centre is one of the few art spaces in the country dedicated to Indigenous art, and Co*Lab is an organization devoted to supporting the community of artists who live and work in The Quarters.

Both projects were designed by Rockliff Pierzchajlo Kroman Architects (RPK) under the direction of its youngest partner, Jan Kroman. RPK was established in 1969 and has undergone many changes during the past half century. While the firm has long-established expertise in health care, affordable housing, and seniors’ residential design, Kroman’s appointment as principal five years ago has coincided with new forays into arts and cultural projects.

The Ociciwan Contemporary Art Centre is located in a simple brick commercial building that appears to be from the 1960s. The building sits on a highly visible site off Jasper Avenue, fronting the Armature, and near the valley edge overlooking the North Saskatchewan River. The name Ociciwan comes from a Plains Cree word relating to riverways, that means “the current comes from there.” This fluvial inspiration is seen in the most striking aspect of the design—a dynamic façade made of locally fabricated aluminum composite material. The architects designed four different standard panels, skewed at varying angles, and specified two types of applied film to give the façade various reflective qualities. The resulting surface reflects the sky and surroundings and has subtly changing qualities reminiscent of flowing water. It is also very affective at night, when LEDs incorporated into the vertical channels create beacon-like strips of light. A planned mural by Winnipeg artist Kenneth Lavallee will give further vibrancy to the building’s south façade at street level. 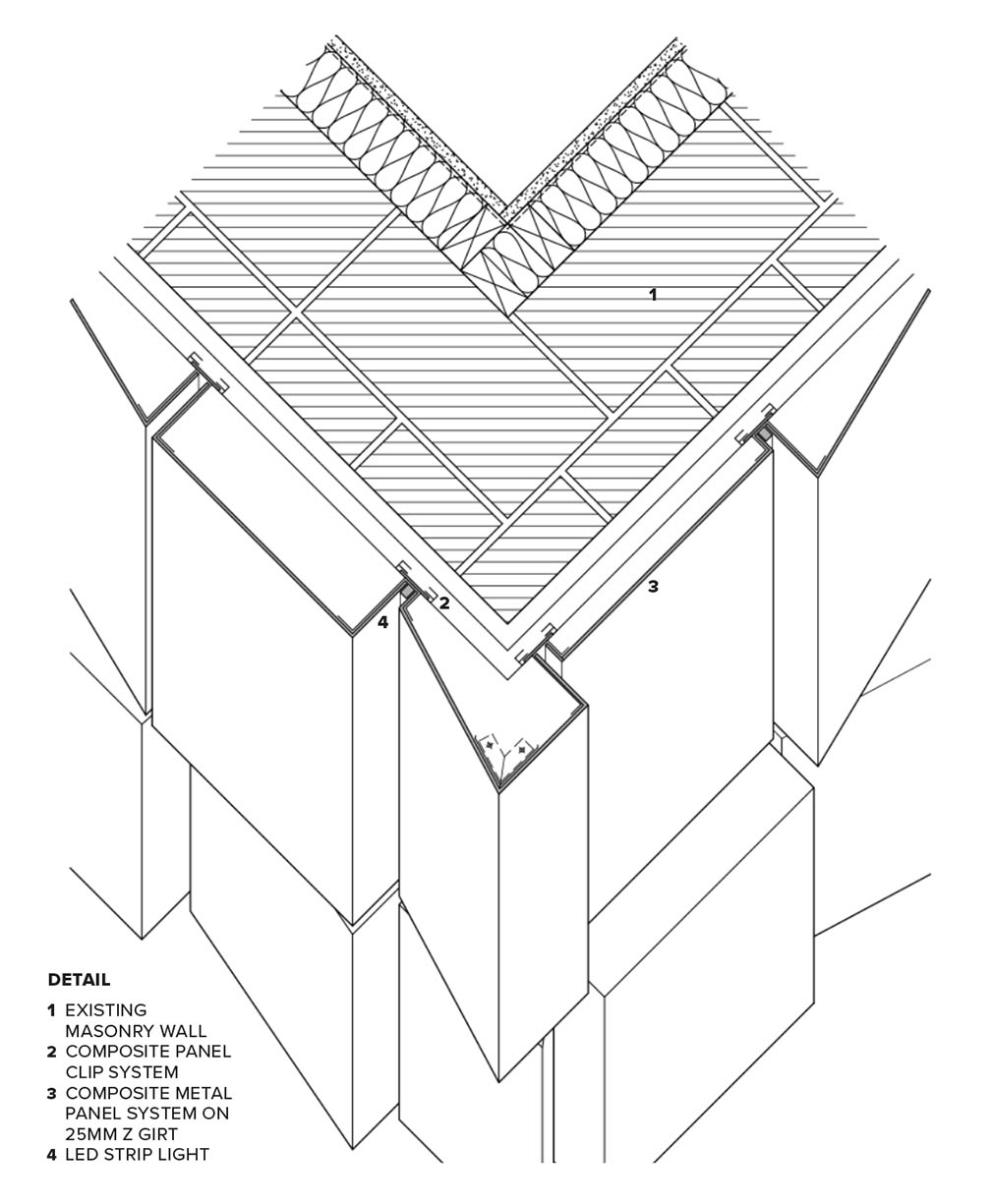 Inside, most of the main floor is a multi-purpose gallery space that one enters directly from the street. It’s a simple space with some deft detailing and will help the organization realize its mandate to showcase the work of Indigenous artists—an important initiative for Edmonton as well as for surrounding communities. The Ociciwan collective also intends to use the adjacent public spaces for its programming initiatives. An elevator was inserted into the building as part of the upgrade, and is effectively the primary form of vertical movement, with existing stairs serving a secondary role. The lower level contains a workshop, along with a flexible space intended for performances and multi-media installations; upstairs are offices and a community space. All of the major interior spaces allow for smudging ceremonies—an important design consideration.

Nearby, the Co*Lab project on 102A Avenue NW is a somewhat more eclectic facility. This perhaps aptly reflects both the structure of the two existing commercial buildings it occupies and the community-led nature of the organization that administers it, the Quarters Arts Society. The renovation of the facility has resulted in three major spaces: a tall gallery space painted white; a large multimedia community space painted black; and an outdoor space dubbed the “backyard.” The two major interior spaces are connected through a compressed corridor, which is given its own vibrant identity with traffic-light-yellow walls, floor and ceiling. This same bright colour is used on stairs, handrails, and other feature elements throughout the building. The neatly arrayed floorplate includes support spaces, a workshop, a media room, and small studios for artists-in-residence on a second level.

The way the original facility had been adapted over time is reflected in the bric-a-brac assemblage of the principal façade, which has been carefully articulated by RPK through the strategic use of colour, new materials, and entry points. In a unifying gesture, the exterior is painted white, and several existing openings filled with glass block have been preserved. Three large garage doors—two on the front façade, and one facing the backyard—will facilitate the performances which are part of many of Co*Lab’s projects. Audiences will be able to flow in and out of the building, from street to event space. At the gallery end of the building, polycarbonate cladding conceals an older stucco façade, and reinforces the playful aspect of the design, especially at night, when this part of the building is set aglow with vertical stripes. Co*Lab has installed a jaunty, 1950s-style sign over the main entrance, adding to the feeling of welcome.

While these two arts centres were developed at the same time, and under the same city-backed initiative, the resulting buildings are quite different in both design and spirit. Each was developed to suit the character and aspirations of the organization it accommodates—and that’s already palpable, even though with pandemic restrictions, neither has yet been able to fully realize their cultural ambitions, nor the opportunities afforded to them by their newly renovated buildings. By rehabilitating and transforming two existing buildings into dramatically different places, Kroman and the RPK team demonstrate that architecture can be distinctive and successful on modest budgets.

As The Quarters develops, concerns about gentrification inevitably arise: however, a neighbourhood cannot thrive without investment. It is vital that the right kinds of buildings are developed to ensure that the existing inhabitants aren’t pushed out as newcomers move in. Supporting arts organizations and the city’s artists is a natural fit for this area, with its proximity to Edmonton’s major cultural organizations. It’s also key to preserving Edmonton’s reputation as a cultural centre, and to maintaining the vitality of its core. A thriving inner-city district can only benefit the entire city, and these two new art centres must be understood as a hopeful sign of things to come.

Graham Livesey, FRAIC, is a professor in the School of Architecture, Planning and Landscape at the University of Calgary.

It is Bright, It is Lit: Qaumajuq, Winnipeg, Manitoba