By Canadian Architect On Apr 7, 2019
Share
WINNER OF A 2018 CANADIAN ARCHITECT AWARD OF EXCELLENCE
The Canadian Grand Prix is part of the Formula One Championship, the world’s premier series of single-seater auto races, held on raceways around the world. Since 1978, the Canadian race weekend has been held in Montreal, on the Circuit Gilles-Villeneuve. 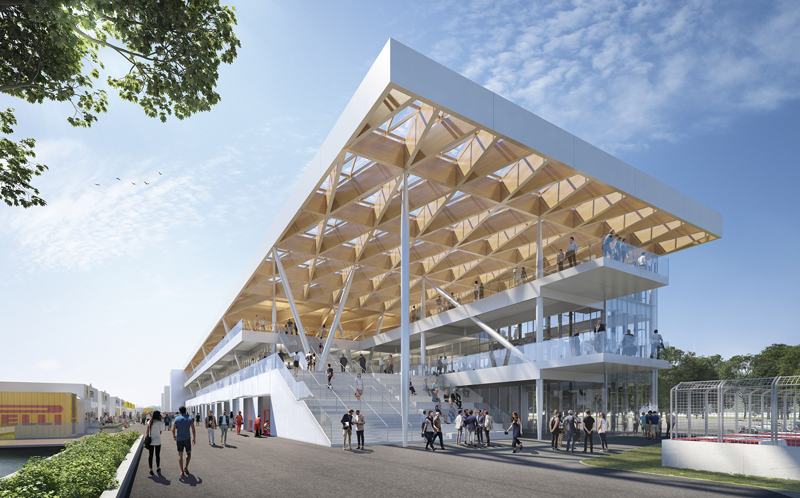 Named in honour of the Canadian auto racer, the raceway is located on Notre-Dame Island, the former site of Expo 67. In the decades since that pivotal event, the island has been gradually transformed into a park with various attractions, including a casino, public beach, Olympic rowing basin and military museum. When it is not hosting the Formula One race, the four-kilometre roadway is popular as an informal training track used by amateur cyclists.

As part of a renewal agreement for the Canadian Grand Prix, the City of Montreal has committed to replacing the temporary structures currently used for the race with a permanent building that will accommodate the needs of the event. The new paddock will include garages for the racing teams, offices for the Federation internationale de l’automobile, which organizes the event, rooms for the race sponsor, lounge space for 5,000 people, and a media center for journalists and broadcasters. All of the building’ interior furnishings and equipment are shipped from abroad and installed for the duration of the event.

Construction for the project is on a tight timeline: it needs to be completed in the ten months separating the 2018 and 2019 editions of the Grand Prix. To facilitate the completion of the $50-million project in this timespan, the building is designed as an assemblage of prefabricated parts. These include concrete panels, steel beams and columns, CLT wood beams and panels, curtain wall and demountable partitions. In case the car racing event is terminated, the entire structure can be dismantled and the material reused.

The building aims to make responsible use of public money, and makes a virtue of the fact that it will be only be used for a short time each year. In contrast with other international Grand Prix facilities, the lounge areas have no exterior walls and no air conditioning, finishes are bare, and solar panels provide electricity for lighting. The open-air lounges bring guests closer to the sights and sounds of the adjacent raceway. 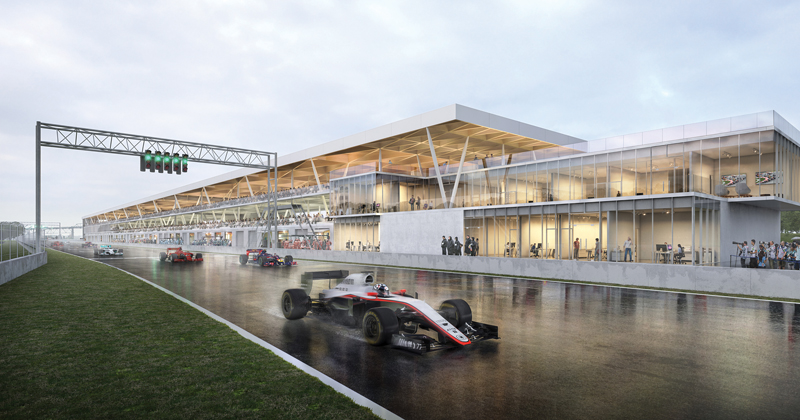 Overhead, the building’s iconic roof structure distinguishes the Canadian edition of the race. The roof creates an identity based on our collective desire to make optimal use of wood, one of our most important natural resources. The exposed geometric structure is reminiscent of the daring pavilions of Expo 67, and marks a commitment toward sustainable development.

David Penner :: I really admire the way the exposed wood roof structure speeds along the raceway. It works at the almost-sublime scale of the speedway and celebrates the event of the Grand Prix.

Monica Adair :: If the Grand Prix isn’t exciting enough, this project further elevates the spirit of the sport. The structure is a powerful branding icon for the site and F1, putting architecture on par with the captivating spectator sport, all while showing a capacity for restraint.  Also impressive is the plan to tackle environmental sustainability by minimizing the use of mechanical systems—a progressive approach that you wouldn’t necessary expect from F1.

Ted Watson :: It’s a very satisfying response to the program, while also delivering a clear legibility, making great spaces and a strong identity for the project type. It’s a beautiful bar, the resolution of the plan is clean, the sections are compelling, and the use of the wood system is powerful and cost-effective.