“There was an instant synergy,” says Dworkind. “We have similar aesthetics, but still, it’s two different brains coming at a problem from two different sides.”

Caffettiera: a ’90s-nostalgic Italian cafe with crazy-quilt Formica-topped tables and prodigal expanses of fake walnut. Hinterhouse: a prefabricated cabin with the spareness and space-transforming utility of a shoji screen. RYÚ (Peel): a sushi bar where roughly exposed wallpaper fragments and slapdash plastering from the building’s past lives offset the elegant details of its present incarnation. Whatever the project, for Montreal’s Guillaume Ménard and David Dworkind, the client brief is the DNA for bringing a unique concept to life.

Prior to merging their solo practices into Ménard Dworkind Architecture & Design (MRDK) in 2018, McGill University architecture graduate Dworkind was designing residential and urban infill projects, while Ménard had parlayed a background in construction and industrial design into a successful hospitality design practice. Fans of each other’s work on social media, they teamed up when Ménard sought a design partner for Miss Wong, a 1,100-square-metre Chinatown-themed restaurant/bar/beer garden in Laval. “There was an instant synergy,” says Dworkind. “We have similar aesthetics, but still, it’s two different brains coming at a problem from two different sides.”

Both brains would rather devise custom solutions than specify products from a catalogue. A case in point: the ex-pat Italian owner of Montreal’s Caffettiera wanted to recreate the sort of spot he fondly recalled from his Old Country youth where you might stop in for a morning espresso, a midday sandwich, or an after-work drink. Activity in such a space fluctuates over the course of a day, with one barista/cashier on duty in the morning, and a second pay point opening up by the sandwich counter for lunchtime. MRDK integrated sliding signage into a custom downlighting track; staff manually shift the signs to align customer flow with active service points. Visually, Hinterhouse, a MRDK-designed short-stay retreat north of Montreal, is as minimal as Caffettiera is maximal, but sliding screens similarly augment the small cabin’s adaptability. 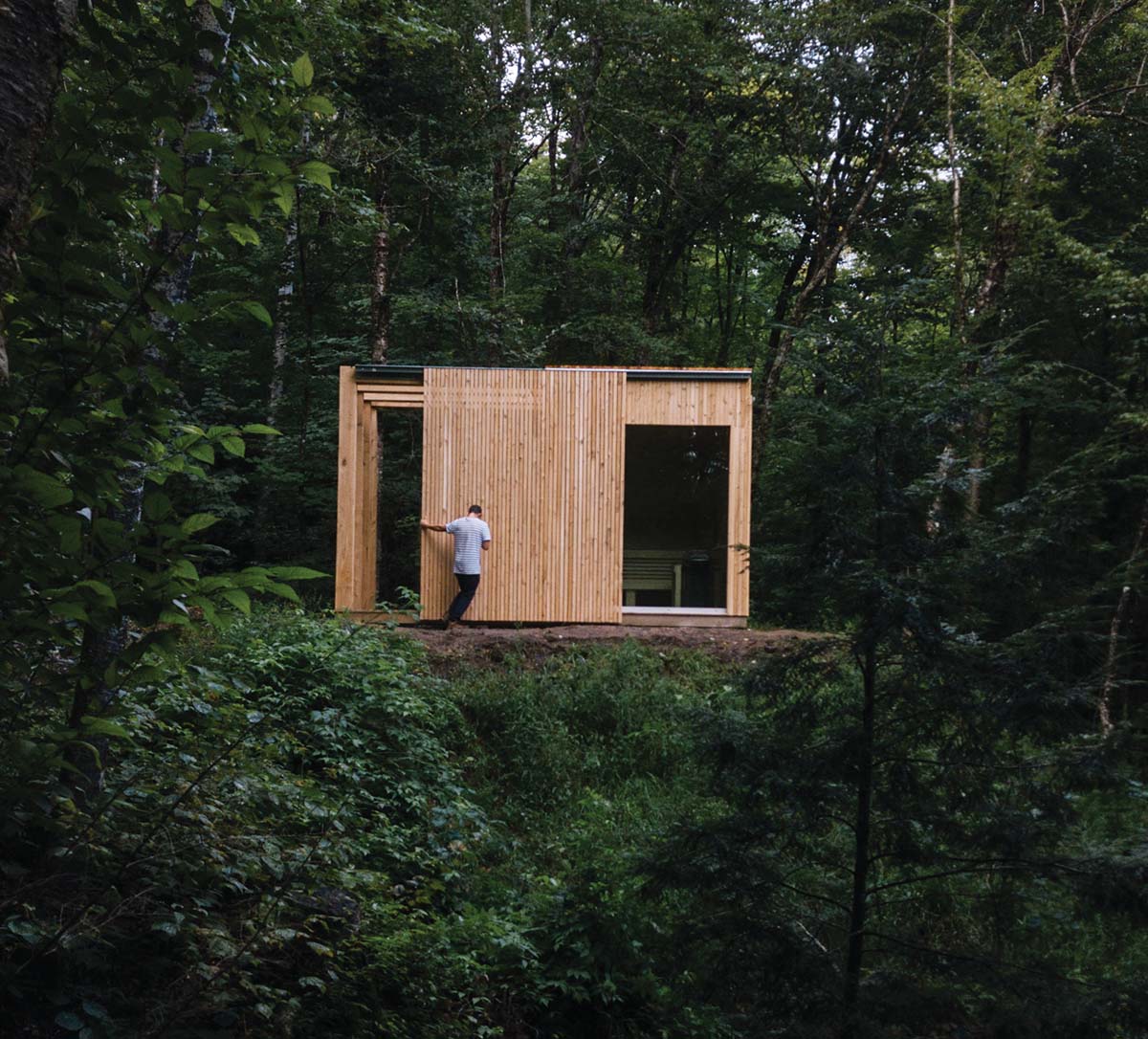 Fortuitously, Hinterhouse publicity brought multiple cottage commissions MRDK’s way just as Covid-19 shuttered bars and restaurants. As hospitality venues and workplaces begin to reopen, the 4.5-person studio is now designing an 1,670-square-metre Eataly-style emporium for Japanese food in Washington, DC, and a Montreal tech company’s office. Pre-pandemic, this was to be a 2,410-square-metre space; it will now be 1,205 square metres. “Half the size, but same amount of employees,” says Ménard, sounding excited by the challenge. “People are going to work from home half of the week, and come to the office to meet with people and have some creative sessions. We’ll be the first to design their new way of building offices.”