On a narrow peninsula along the Atlantic coast of Nova Scotia, Brian MacKay-Lyons is building a village. Beginning with the design-build exercises known as Ghost, the site has long been the research lab for the residential side of his practice, MacKay-Lyons Sweetapple Architects. The property has been gradually built up through a combination of the relocation and restoration of aging structures, and the design and construction of new ones.

Enough House falls into the latter category. Its name comes from an early conception of the project as a reaction against excess. It is meant to be a prototype for a “ minimum” house, with the essential elements of a house arranged in an economical footprint.

My first in-person glimpse of the cabin came at the end of a long journey. After being chosen for this year’s Ghost Residency, I put most of my belongings into storage, packed up my small pickup, and made the trek from North Carolina to Canada. MacKay-Lyons’ property, which he calls Shobac, sits nestled among glacial formed drumlins. It is bordered on one side by the Atlantic Ocean, and on the other by Mosher’s Bay at the mouth of the LaHave River. Arrival to the site is via a rough patchy road, which carries you over a series of hills and down into the grouped buildings. As you crest the last hill, you catch sight of the campus against the backdrop of water and the LaHave Islands in the distance, before losing the view behind trees.

The burnt orange colour of Enough House’s weathered steel skin stands in bold contrast to the landscape of rolling pastures and buildings clad in silver-gray shingles, wood, or galvanized metal. It is the newest addition to the collective, but its prominent position on the site would make you think it might have come first. MacKay-Lyons says that he tried to find the effective centre (or “navel” ) of the property when deciding where to site the cabin. Its placement in relation to the other buildings gives form and identity to the surrounding spaces, defining a public square to the front, parking area to one side and barnyard to the back. This sort of proto-urban development—shaping space by filling in, rather than expanding out—illustrates the ideas of settlement and community that are integral to the work of the practice.

The building sits lightly on a foundation of three concrete fins, which run perpendicular to its length and reach out into the landscape, bending to create outdoor rooms. Facing the road, two fins frame an elevated dooryard. On the valley side, the concrete walls wrap around a rectangular steel fire pit to create a gathering space. Elevated on these fins, the gabled-roof structure evokes an iconic house shape, while the asymmetrical composition of the elevations begins to deconstruct this traditional form.

The lower floor, dedicated to the living spaces, is designed to open to the landscape. A bite is taken out of the southwest corner to create an entry porch, which pinwheels in plan with the full-height glazing that wraps around the northeast corner, the latter presenting views of the adjacent pastures and hills. Sheep are often grazing within a few feet of the glass, giving the project one of its nicknames: “Shepherd’s House.” The hearth, an important element in most of the firm’s projects, sits on a raised plinth at the base of the perforated steel stair. This allows it to be enjoyed from the living space, while heat rises up to the sleeping quarters.

The bedroom is, somewhat paradoxically, the largest space in the building due to the generous headroom provided by the steep pitched roof. A large south-facing window above the stairs allows for solar gain, while offering views from bed of the sunrise over the ocean. Through most of the building, the wood-framed structure is left exposed, with only the service spaces of the kitchen, bathroom, closet, and dressing area receiving an interior finish of Douglas fir plywood.

When not in use for summer rentals, the building is meant to house an intern architect, giving the project its most commonly used name: “ Intern Cabin.” This year, that intern is me. Soon after being asked to write about the cabin, a blizzard swept through the region, making the road impassable and knocking the power out. As I reheated the leftovers of a deer leg in a pot on the modernist Swedish wood stove, I thought about how different my relationship with the cabin is from that of the average guest. The harsher weather is an obvious difference—but most people come here for respite, while I am here to work. On an average day, I wake up, build a fire, make breakfast, and do some farm chores before beginning work on architectural projects. This could mean a quiet day at the computer, or being pulled in multiple directions. 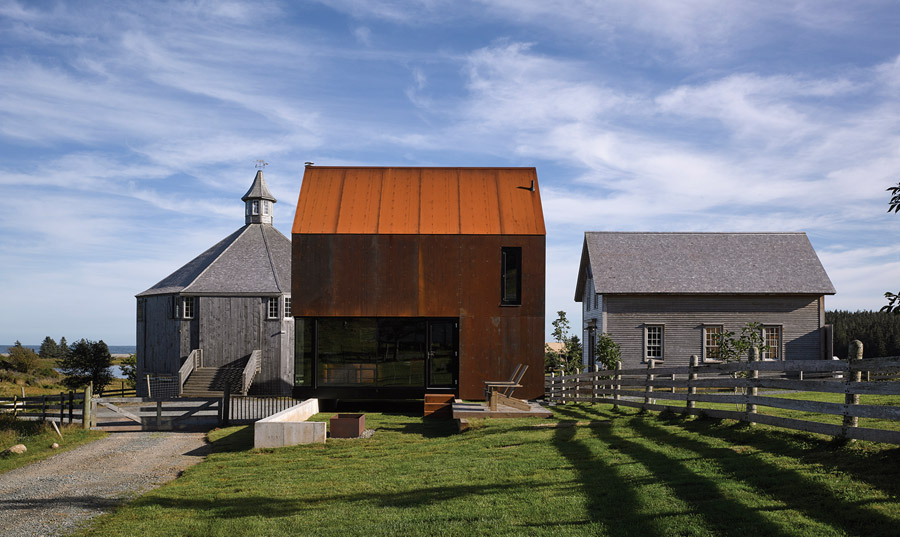 The remoteness of this place can, at times, make it feel like the edge of the world. But in other ways, it feels more like the centre of it. The sites of two of the projects I am working on can be seen from the cabin’s living room window, with other projects within walking distance or a short drive away. Brian MacKay-Lyons spends part of each week on the property, and when he is here, Shobac is effectively the remote command post for the practice. 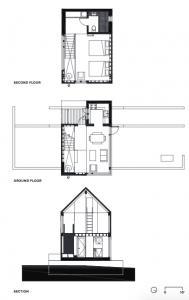 The other buildings on-site are regularly occupied by renters or guests of the MacKay-Lyons family. In the past few months, these have included architects from abroad, an award-winning science fiction author, a collective of professional surfers, several photographers and a film crew shooting a music video. Due to its central position, the cabin is also known as “Gate House,” and part of my role is as gatekeeper and ambassador, greeting and directing visitors—whether local craftspeople working on various projects on the site, or simply someone who took a wrong turn while looking for Gaff Point Nature Preserve. One day I might be mending fences, and the next day having coffee with Glenn Murcutt.

The ability of the Enough House to shelter an intern through the winter as well as accommodate vacationers in the summer shows the flexibility inherent in the design’s simplicity. The work of Brian MacKay-Lyons has always been more about an evolution of ideas rather than spontaneous invention. In this way, the ideas explored in the Enough House can be seen reworked or flipped around in prior and subsequent projects. The pivotal role of the project within the landscape of Shobac seems to be illustrative of its larger impact. As MacKay-Lyons describes it: “It’s a small building that punches above its weight.”

Joseph Burkett is the current holder of the Ghost Residency with MacKay-Lyons Sweetapple Architects. A part-time carpenter, woodworker and upright bassist, he holds a masters degree in architecture from North Carolina State University.

For What it’s Worth