It’s been more than 50 years since English architecture critic Reyner Banham wrote his ground-breaking The Architecture of the Well-Tempered Environment, the first comprehensive history of the integration of mechanical and electrical systems into architecture. Lamenting the “sheer paucity and poverty of academic discourse on the topic,” Banham set out to demolish the academic prejudices that had excluded these systems from serious consideration as integral to understanding the architecture of modernity.

In many respects, University of Pennsylvania Architecture professor Daniel A. Barber’s expansive Modern Architecture and Climate: Design Before Air Conditioning surpasses Banham’s considerable ambitions. Barber achieves this not just by his meticulous historical scholarship, but also in the way the book lays bare the principles that underpin our energy- and carbon-intensive built environment. 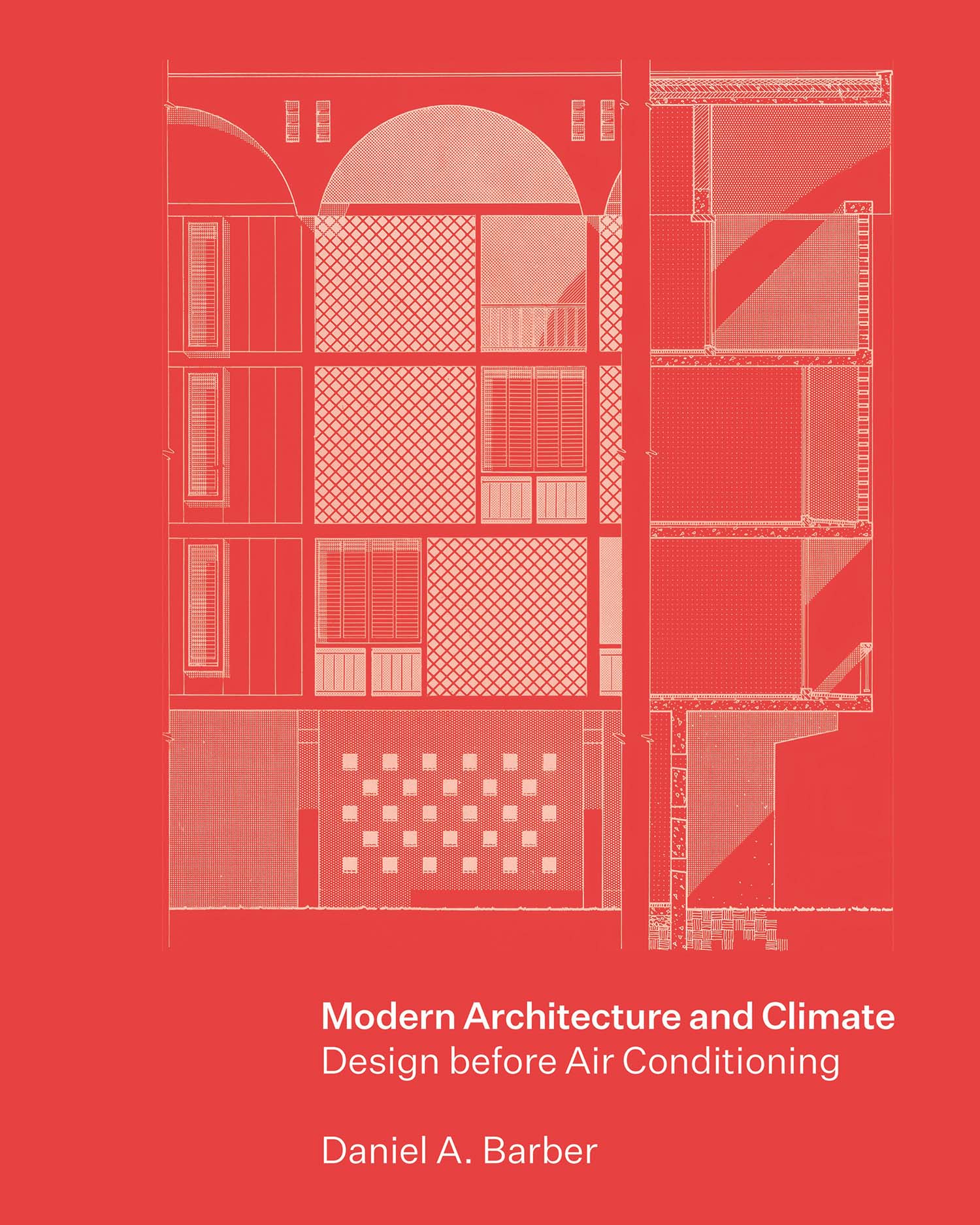 Modern Architecture and Climate is a fresh and original history that chronicles the intense research undertaken by designers to adapt modernist architecture to various climate conditions, as modernism’s political and aesthetic influence reached across the globe. Barber’s history of the period stretching from the mid-1930s to the 1960s—preceding the widespread adoption of mechanical air conditioning and sealed curtain-wall buildings—is also a glimpse of what might have been. The book showcases a climate-adapted architecture free from reliance on fossil fuels or other energy, particularly to address cooling loads.

The book divides neatly into two parts. Its first half comprises three histories of formal explorations made to keep buildings cool, beginning with Le Corbusier, moving to the work of modernist architects in Brazil, and concluding with American architects working outside of the continental United States. The book’s second half chronicles the impressive efforts to harness the increasing scientific understanding of weather and climate into a reliable means of maintaining a livable interior. It describes the pioneering work of the Olgyay brothers, who coined the term “bioclimatic architecture.” As in every great book, there is an antagonist: in this case, it’s ASHRAE, whose uniform definition of comfort paved the way for mechanical ventilation to overwhelm the more subtle and variable solutions developed before air conditioning.

Barber’s originality is apparent in the whole new cast of characters—almost entirely missing from existing histories of modernism—that emerges in this book. This is especially remarkable considering that the historical period the book covers is so often chronicled that it appeared to have been picked clean.

Even his chapter on Le Corbusier focuses on an obscure 1931 Barcelona proposal, the locus for a series of climate-adapted innovations. These included an internal courtyard to draw hot air up and away through the building’s section, and a rudimentary brise soleil—elements that would continue to be repeated and refined in Le Corbusier’s later work. Similarly, the chapter focusing on Brazil includes not only modernist superstars like Oscar Niemeyer and Lucio Costa, but also the Roberto brothers—architects of some of the most truly innovative climate-adapted buildings of the 1930s. Their built projects may not have preceded Le Corbusier’s concept of the brise soleil, but they certainly surpass it in sophistication and adjustability.

Each of these examples is well illustrated with beautifully selected drawings and archival photos. A notable example, from Barber’s chapter on American architectural work around the world, is the set of drawings and photos of Josep Lluis Sert’s project for the embassy and diplomatic compound in Baghdad. Sert’s work here manages to elide the bombastic projection of American diplomatic and scientific prowess, to instead create an original and specific response to climate and culture.

The book’s second half is just as rewarding. Barber’s chapter on the Olgyay brothers is an especially noteworthy piece of scholarship. These two Hungarian-born architects led a Princeton research lab that set benchmarks for measuring the effects of climate on building form, undertook ground-breaking experiments, and promoted architectural design as a means of tempering climate. The fact that they are largely unknown is a reflection of the difficulty (until very recently) of translating complex ideas, like those around climate science, into instruments that the profession could understand and reliably deploy.

In the background of all these histories is an effort, largely led through engineering bodies that amalgamated as ASHRAE, to establish a set of uniform and universal standards for interior temperature and humidity: an ideal interior climate. It’s depressingly unsurprising that the assumptions which underpin the development of this ideal climate were shot through with racism and a paternalistic legacy of colonialism. In the decade following the Second World War, the triumph of the fossil fuel economy of the United States and Europe swept aside most climate-sensitive architectural investigations as mechanical air conditioning systems supplanted these earlier, more responsive, efforts to address cooling. Like a motor on a sailboat, the new technology of air conditioning allowed architects to abandon the intensive knowledge of site and local conditions that formed the basis for climate-responsive architecture.

Barber’s work is a welcome addition to the history of architectural modernism, and is particularly pertinent in our current circumstances. It demonstrates the profound impact that our expectations of a uniform interior have had on the planet we share. But its examples also offer an inspiring model for challenging assumptions about the role of building form in mitigating climate extremes.

Javier Zeller is an architect working in Toronto with Diamond Schmitt Architects.