This house has a sculptural expression that is fascinating. While the intricate brick and barrel vaults would make for an expensive build, there is a lot of design effort that has gone into this interesting interlocking of multiple units on a narrow Toronto infill site. More projects are needed that fill the “missing middle” and bring increased density to downtown neighbourhoods in the city; this project takes an architecturally ambitious approach to tackling that issue. –Jury Comment

Older, low-rise urban neighbourhoods are under tremendous pressure to increase their density. A common mid-20th-century answer to this chronically recurring supply-and-demand problem was to plunk down new mid-rise or high-rise multi-unit buildings wherever a sufficient quantity of small, older lots could be bought up, without much regard for what this rough patchwork did to the urban fabric. Since then, zoning has become more attuned to context, and ‘gentle densification’ has become a hot topic.

This project argues that there is more to successful gentle densification getting the grain and height right: it also hinges on a willingness to embrace new typologies, along with styles that cannot be classified as either ‘modern’ or ‘heritage’. Ja Architecture describes Toronto’s Markham Street as a thoroughfare “where anomalies are the norm.” Adding to the street’s already-heterogenous mix of low-rise housing types, Ja proposes replacing an end unit in a series of old rowhouses with a new multi-unit housing development that capitalizes on one of Markham Street’s anomalies: a narrow public laneway running the length of the site.

Five interlocking units of varying type are carved into the four-level main volume. With services nested along the party wall and the entries along the easement, a scissor stair negotiates between the two, sometimes channelling people upwards, sometimes pulling light into the building. At the rear of the site is one additional unit: a vaulted, two-storey laneway live/work suite. 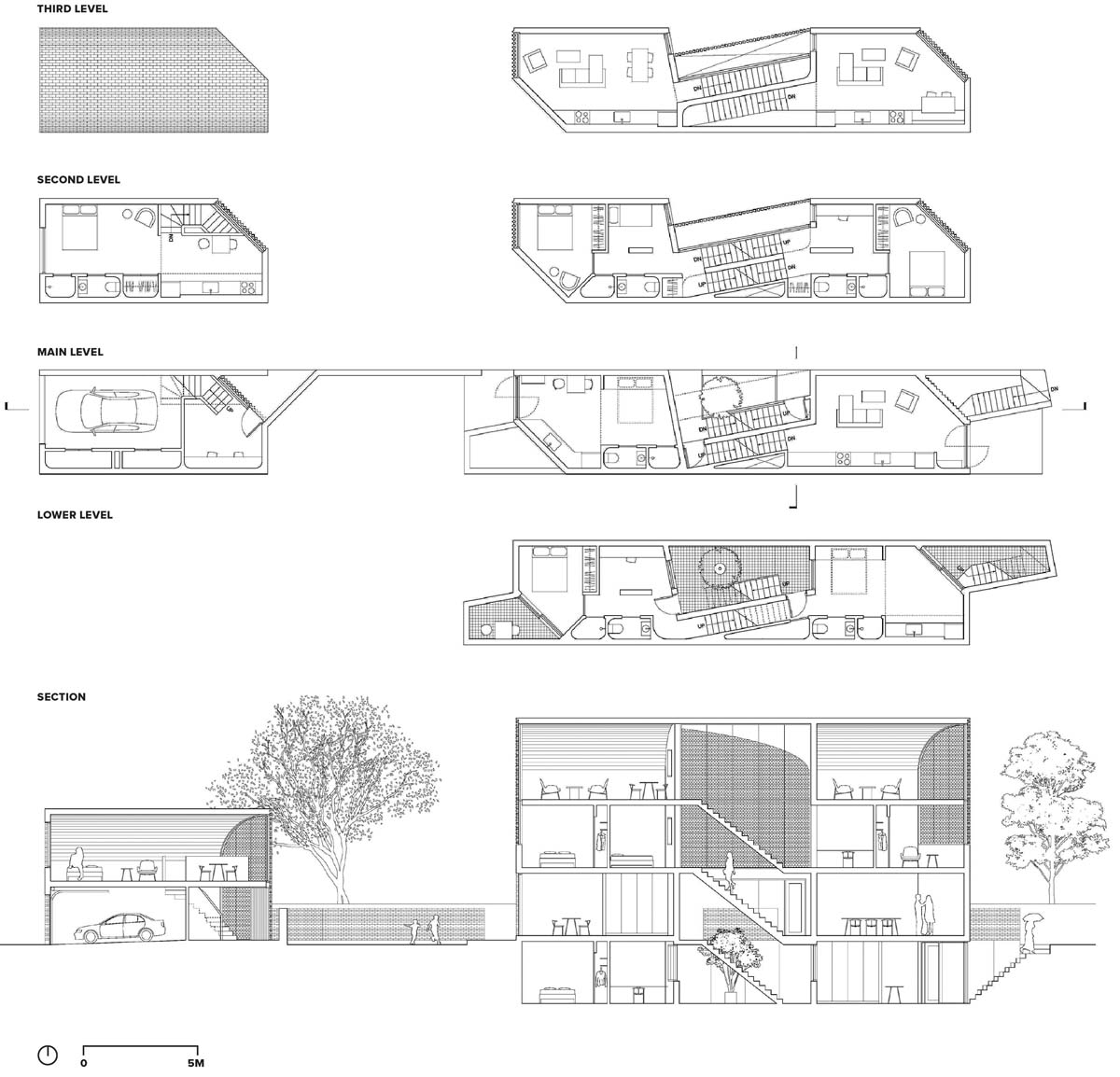 Clad in brick veneer, the main building is connected by its material and form to a laneway suite accessed from the rear yard. The continuity of the two volumes is reinforced along the public thoroughfare through double wythe brick garden walls. While the wall provides a spatial separation between public and private, openings in the wall mark access to each of the units along the pathway.

The main building leverages the efficiency of the scissor stair to fit two studio units and three two-storey units within a volume that has only three fully above-grade storeys. Spaces within each unit are not stacked in a typical fashion. Instead, the scissor stair provides a dedicated circulation system within each of the main building’s two-storey units, connecting the sleeping spaces on the lower level to the living space above. Deep walkouts with full-height glazing connect the main building’s lower-level units to the ground.

Projects ranging from a 16th-century barrel vault in Venice’s Arsenale to the walk-up entries to the units in Alvaro Siza’s SAAL Bouça social housing complex in Porto, Portugal, influenced Ja Architecture’s approach to the Markham project. In a neighbourhood of pitched roofs, this project’s vaulted roofs are at first glance yet another Markham Street anomaly. But this is at the same time a contextual densification, harmonious in scale and material with its surroundings, and even echoing the arched dormers of the adjoining old row houses. This project’s ingenious interlocking volumes are pieces that could help solve the gentle densification puzzle.