In transforming this 150-year-old row house in a gentrifying neighbourhood, the architects applied a contemporary approach to space planning while retaining character elements inside and out. Atlantic Canada’s economy has never matched that of richer and more populous parts of the country. This is why Halifax still has a fair supply of 19th-century wooden row houses: flat-fronted little abodes, snugged up to each other and to the sidewalk, often brightly painted, but not in any other way showy. Agricola Street, the hippest avenue in the city’s once-scruffy North End, is where row houses, trendy shops and restaurants and at least one medical marijuana dispensary now comfortably coexist. In the middle of one of its tidy blocks, the new chartreuse-coloured door on the cedar-shingled residence painted charcoal grey signals a more radical transformation within. Sallyway House is emblematic of a contemporary approach both to heritage and to compact living.

Its architects, Jane Abbott and Alec Brown, spent much of their youth in Nova Scotia and worked in places including Copenhagen, New York City, London and Berlin before returning to Halifax and founding Abbott Brown Architects in 2013. They are unabashed modernists with a deep love of Atlantic Canada’s traditional architecture. “If something is good, you don’t tear it down unless you can do better,” says Abbott. When her octogenarian parents recently decided that the Halifax home they had lived in for decades was getting too big for them, the 1865 row house on Agricola Street came into the picture. Abbott Brown’s approach to renovating it was to keep its strengths while resolutely purging a clutter of dividing walls and opening the house at the rear and from above to flood it with natural light. 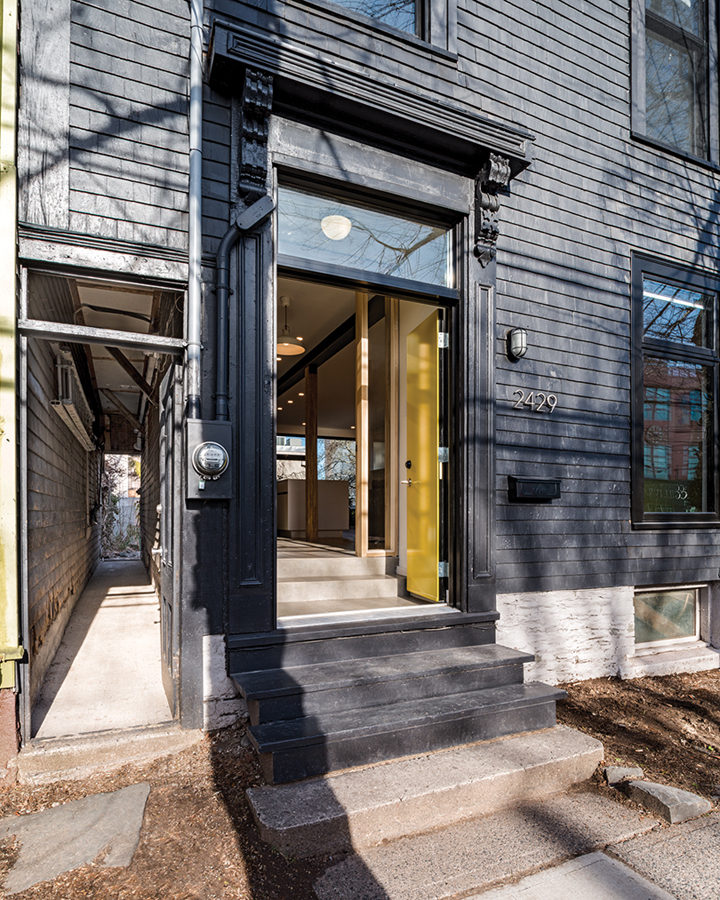 The name “Sallyway” derives from the ancient marine fortification term “fallyway,” referring to a secure point of entry. (The meaning survives in the term “sally port,” a controlled entry to a building such as a prison.) Here it refers to the house’s narrow at-grade passageway along one side, originally used for bringing horses through from the street to the rear yard. On the upper floor of this 1,200-sq.-ft. house, the space above the sallyway is part of the interior, which means that the second floor is slightly larger than the first.

A key decision was to keep the original hand-built stair but demolish all dividing walls on the ground floor. Abbott wanted to “blast open” the garden-facing rear of the house so that it would be almost entirely glazed. Structurally this involved inserting a new steel I-beam that traverses the house from front to back, and is supported by a new parallam post.

Upstairs, the structural system is now a hybrid of old and new. A post original to the house—and now flanked by new, open, white-painted steel railing panels that connect with the wood-spindle railing of the 1860s stair—still extends up through the ceiling and connects with the original ridge beam. Reinforcing this beam on the underside of the ceiling are new white-painted laminated veneer lumber spans running crosswise through the house on either side of the old post. This structural intervention made it possible to dramatically open up the second floor, which previously had a dropped ceiling, several small rooms, and, above the sallyway, some awkwardly deep closet space. “The reason this house is so flexible is that the roof is not held up by any interior load-bearing walls,” says Abbott. “Basically we could place walls where we wanted them on the second floor.”

Given that her parental clients are avid art collectors who were moving out of a place approximately five times the size of Sallyway House, storage and space-planning were important. On the ground floor, the long and extra-wide Caesarstone-topped kitchen island houses a dishwasher and combines food prep and dining areas with drawer space. The narrowest imaginable sliver of a powder room tucks into the wall behind the stair. Upstairs, built-in shelves and closet systems in the bedrooms promote efficient space management. Even the sallyway was enlisted to the cause: its soffit conceals mechanical systems and is used for venting. Light-coloured finishes contribute to a sense of openness in a house that only receives natural light through its rear and front walls and the new skylights above the main stair. Where possible, the original spruce floorboards were restored, primed with lye to lighten their tone, and treated with a UV-resistant matte finish. 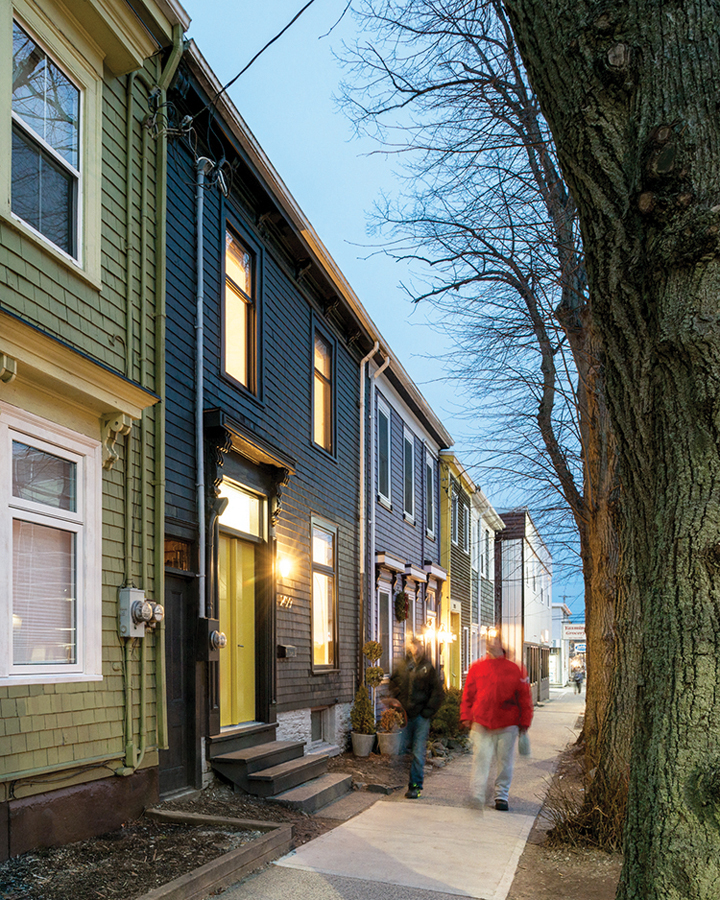 There is nothing particularly game-changing about this modest project, but in the context of present-day Halifax, it matters. New mid- and high-rise developments are springing up fast and changing the character and scale of what is, for North America, an old city. Abbott’s parents can walk to the butcher’s and grocer’s, and they’re steps away from some of the best restaurants in town. A project like Sallyway House is a reminder of the adaptability of the city’s older row houses. And the sight of flourishing Agricola Street is proof that this city’s pre-car urban fabric would be a terrible thing to squander.

Pamela Young is a Toronto-based writer on architecture and design. Photos by Greg Richardson.