As governments globally invest in the repair and upgrade of infrastructure, new possibilities are emerging. Infrastructure has traditionally been viewed as an ongoing maintenance expense which is chronically underfunded. As a result, for example, bridges are in a perpetual state of disrepair. marrying revenue generation with infrastructure, Toronto-based architects Farrow Partners are proposing a ‘living bridges’ strategy that combines the physical infrastructure of bridges and roadways with commercial and residential uses.

What if bridges were designed as long term, multi-use, high performing, revenue producing assets rather than single function, costly liabilities? The idea of building multi-use, multi-functional buildings and neighbourhoods has always been a core ingredient to creating highly successful cities. Equally, the idea of building multi-use, multi-functional infrastructure in the core of highly successful cities was invented long before car-centric planning norms dominated our thinking about urban bridges.

Although the idea seems novel and arguably radical, the construction of mixed-use ‘living bridges’ is hardly without precedent. For example, the Rialto Bridge in Venice and the Ponte Vecchio Bridge in Florence combine infrastructure with human-scale, walkable mixed-use urban assets. Beginning in the 15th century, shops were built along the sides of the Rialto Bridge so as to generate rental income for the State Treasury, as a way to generate revenues to help maintain the bridge. 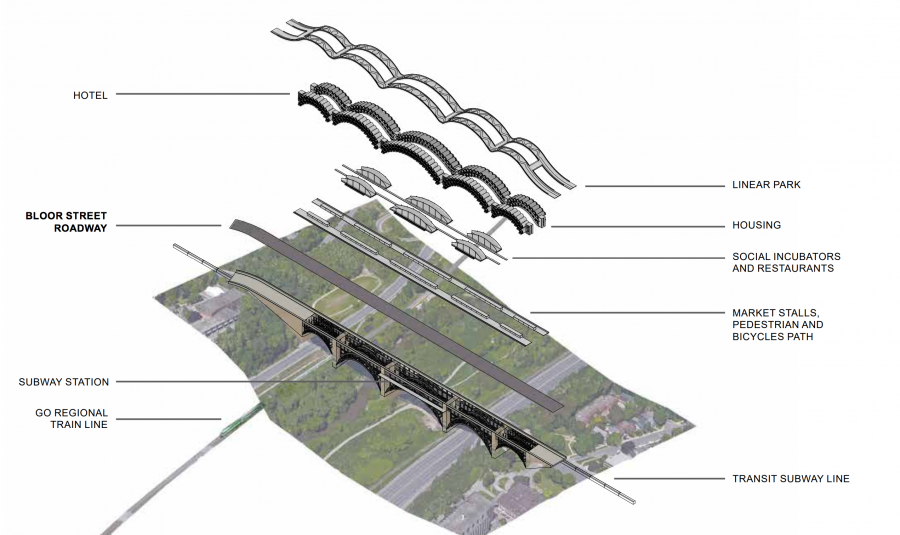 Farrow Partners imagine a similar solution in Toronto. A rendering shows the Bloor Viaduct dramatically reimagined through the introduction of condominium units, a hotel, and a retail, with a new linear park topping the structure. Made technically possible by flexible GRIP Metal technology, the conceptual ‘living bridges’ project serves to highlight the aesthetic and economic possibilities of new mixed-use infrastructure.

Combining a new transformation in building technology with what’s touted as relatively affordable housing housing, the existing infrastructure of bridges can be transformed from passive structures.